Firebirds Turns 20 in a Year Unlike Any Other

The polished chain is leaning on its roots, and evolution, from creating a virtual burger brand to curbside, as it looks toward life after COVID-19.

Firebirds Wood Fired Grill turned 20 years old on December 20. Normally, this would be a time to look back and remember the restaurant world at the turn of the millennium. But 2020 itself felt like two decades wrapped into 10 months.

So there’s a lot for Stephen Loftis, the polished chain’s VP of marketing, to reflect on. Before COVID-19 became the end-all of every industry conversation in early March, Firebirds was poised for a tremendous year, Loftis says. The chain was a full calendar removed from being sold to J.H. Whitney Capital Partners in January 2019. The firm purchased Firebirds from Angelo Gordon & Co. for an undisclosed amount. Gordon acquired the brand in 2011 when it had 18 stores and grew it to 48.

Last August, Firebirds opened its 50th location. And it was plotting more through a significant design change debuted two years prior in Jacksonville, Florida, which showcased modern décor, such as light-colored woods and floor-to-ceiling windows, and made the FIREBAR a can’t-miss focal point.

Yet as much as the brand transformed and was continuing to do so, some of its historic DNA shielded it from COVID’s sharpest blows. Loftis says Firebirds had to scratch and claw, like all restaurant brands, but one thing it didn’t need to do was hard-sell customers on its merits. The company’s reputation insulated it.

“I think guests understood the safety and cleanliness, and the sanitation that goes into our business on a daily basis,” Loftis says.

In other terms, guests trusted Firebirds. They had for 20 years. Additionally, polished casual suggests a higher standard across the board, from food preparation to safety to service. Firebirds had to live up to that before coronavirus.

“We didn’t have to overcome any cleanliness, sanitation, preparing food, service issues, or challenges,” Loftis says. “There was no consumer negative sentiment there.”

That’s not to say Firebirds didn’t innovate. The company launched online ordering systemwide in October 2017 and partnered with DoorDash in November 2018 after a pilot program in select markets.

How prominent these channels were pre-COVID isn’t as vital as the fact they were simply there. The infrastructure was ready.

In one fateful week in March, restaurants either found themselves scrambling to onboard tech or pivoting resources toward it. For Firebirds, it was more the latter. “So we were able to pivot pretty early and make some adjustments to some of our offerings,” Loftis says.

The chain leaned into a fresh category, family meal deals. These arrived March 20 for delivery and ToGo curbside, and offered options from cheeseburgers and chicken tenders to baby back ribs. They started at $29.95 to feed a family of four and included salads, sides, bread, and desserts, like assorted cheesecake and brownie bites. DoorDash provided 20 percent off first orders in those early days as well. 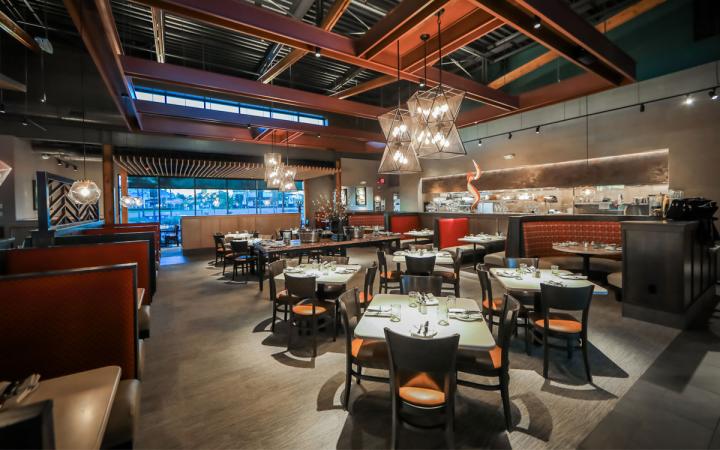 Once the dust settled a bit, Firebirds aimed to become a one-stop shop for guests. And a natural extension, given the chain cuts all its beef, seafood, and poultry in-house, was to introduce a “Butcher Shoppe” program where customers could grab raw items and make them at home. For example, a “Burger Pack” tailgating kit that includes eight half-pound burgers with brioche buns ($39.99) or a “Steak Pack” that features two 14-ounce ribeyes, two 7-ounce center-cut sirloins, and four half-pound burgers ($59.99). All of the options include Firebirds’ signature steak seasoning.

Loftis says people showed up for pickup, grabbed a family meal, and then added a few steaks or other Butcher Shoppe items to cook the next day. Also, in certain markets where laws allow it, Firebirds launched FIREBAR To-Go, which packages drink options, like the company’s Double Black Diamond Martini.

One of the first adjustments for Firebirds was to stand up curbside. It created makeshift drive thrus like those you see dotting parking lots of full-service chains nationwide. Guests can order online, pull up, and have food simply placed in the backseat, trunk, or wherever.

Loftis doesn’t see curbside losing steam. Beyond the convenience benefit, it helps the restaurant. Off-premises guests stay in their cars as opposed to crowding the lobby or bar. This is, naturally, important today as restaurants navigate capacity restrictions and try to promote social distancing. But it will remain viable even when people pack dining rooms. Bartenders or frontline employees can focus on serving guests in front of them instead of running food out. This is doubly true with third-party drivers. “It is here to stay,” Loftis says.

Just like with family meals and adjusting menu offerings to further its off-premises lineup during COVID, Firebirds is working to boost curbside. It’s run a test with FlyBuy, a company that presents like an Uber for tracking cars that show up. The restaurant can observe how close a customer is and prevent employees from constantly having to look out the window to see if they’re approaching. It then alerts staff when the guest is a mile out and .1 miles out.

Firebirds, which backends its service through Olo, has not formalized the test systemwide but continues to look at opportunities to improve curbside as it solidifies its spot in the company’s off-premises future. 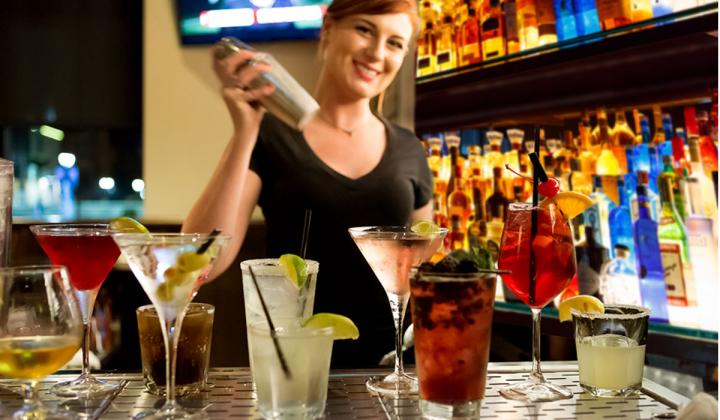 In August, September, and even into October, Firebirds year-over-year sales tracked nearly flat, Loftis says. However, COVID case spikes and reopening setbacks have challenged trends since, as has been the case industry wide. According to Black Box Intelligence, comp sales and traffic for the week ending December 27 were the worst experienced for restaurants since mid-June. Upscale casual and fine dining witnessed the worst comp sales among all sectors.

It’s not an overly complicated dilemma. The best-performing regions of the country based on comp sales during the week were the Southeast, Southwest, Florida and Texas. The worst were California, New England, New York-New Jersey, and the Mid-Atlantic.

So it’s evident that, in many of the poorly performing regions, colder weather is dampening the outlook. But so are restrictions. California, for instance, was the worst-performing region amid its spike in COVID cases. Tighter restrictions due to the virus were likely the driving factor. Comp sales growth has fallen by almost 25 percentage points compared to California’s performance the week before Thanksgiving, Black Box said.

There really is no easy way around the lack of holiday business, Loftis says. “That has sort of been the one sales miss that I don’t know what you do with that necessarily—that has really hurt us,” he says. From catering to office parties, it’s something Firebirds and thousands of stores around America are weathering as 2021 progresses.

All that said, Firebirds is still growing. The chain opened its 52nd restaurant in Lee’s Summit, Missouri, in November—a unit that includes Firebirds’ new open design with a view of the exhibition kitchen. It also boasts an all-season patio and a private dining room with audiovisual technology.

And with COVID trends circling, Firebirds added a takeout section where employees can stage off-premises items. Similar to curbside, this is something that will benefit workflow on the other side of the pandemic as guests won’t have to go into the main restaurant to get their food.

The latter store is a smaller square footage venue that’s been in the work for some time. It’s under 5,000 square feet (typical Firebirds are 6,500 plus) and has a takeout component like the Lee’s Summit restaurant. “I think you’re going to see that prototype moving forward, not only from us, but from a lot of different folks,” Loftis says of the scaled-down option. 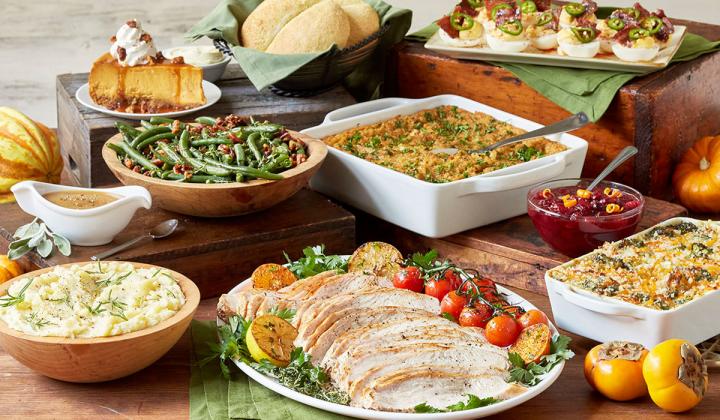 The future, a virtual burger chain, and the surge

One thing about polished casual is that it’s not having an identity crisis. Before the pandemic, customers, especially younger ones, started to flock to the experience-driven corner of foodservice. Given the rise of fast casual and uptick in quick-service quality, brands were forced to draw the line firmer than ever. If somebody was going to pay up for service, it had to separate from a bevy of choices, whether that be price and time (delivery and fast food) or quality and time (higher-end fast casuals).

Loftis says Firebirds revisited its playbook and sharpened its tools during COVID, but with a nod to what comes after. All the service and culinary differentiators from before are going to be the same ones customers rush toward. Food and service they couldn’t replicate at home.

Back in April, Datassential asked consumers what the No. 1 thing they missed was. The answer: “dining at my favorite sit-down restaurant” at 41 percent.

“I think people, once they feel comfortable, are going to charge back out. And we think Firebirds fits that niche,” he says. “People can feel comfortable coming to Firebirds, feeling safe, and having a great experience. We’re ready.”

While the four-wall experience will always reign, Firebirds will have other streams of revenue to turn to if needed. Bundles, for one, proved popular during the holiday season, Loftis says. Firebirds created a Turkey Feast and Prime Rib Feast (options for six or 12 guests). “I think you’re going to see from us more of that and more perfecting of that as we get into [2021] and that’s something, like curbside I don’t think is going to go away,” he says.

Firebirds also fine-tuned a virtual concept called FireBurger, which launched via DoorDash (check out the menu). At the end of December, it ran out of 29 locations with plans to expand to all 52 Firebirds kitchens. Loftis says the idea stemmed from underserved demand for high-end burgers in the marketplace. Firebirds is working on a second virtual concept, too, but will share more details later.

The company is in the final stages of “re-skinning” its online ordering system on the front-end to improve the guest-facing experience.

Additionally, Firebirds started a brunch test August in Florida that’s received positive feedback. That’s a sales lever or revenue opportunity the company will be able to pill as it sees fit as well.

Loftis is optimistic, come spring or so, the country can get back on its feet and restaurants will be there to help them return to some semblance of normal. “The good news is hopefully if May 1 is the date, then this time next year the business is just screaming and just roaring and doing what it needs to do on all fronts,” he says.” I think that’s hopefully what the future is and what the tea leaves hold for us because that would be a lot of fun to get back to that place.”