Some menu items, like the Wood Grilled Jumbo Mayport Shrimp, will be special to the Jacksonville, Florida, location.

Firebirds' Next Evolution: A Fresh Design for the Future

The brand will debut its new restaurant prototype in early November. Simply put: It's all about the fire.
October 2017 Danny Klein

Seventeen years isn’t all that long in the lifespan of a restaurant brand. But it was plenty of time for Firebirds Wood Fired Grill to picture life a decade from now, when the 44-unit brand would fast be approaching its 30s.

“You want to make sure you’re not lumped into the category as an old, stodgy, dark-wood type of steakhouse—kind of your mom-and-dad’s steakhouse,” says Stephen Loftis, Firebirds vice president of marketing.

The culmination of a two-year process to remedy that concern is about to be unveiled. In early November, Firebirds, which was founded at the turn of the millennium in Charlotte, North Carolina, will open its newest location in Jacksonville, Florida. The restaurant is the first fresh prototype for the brand in 12 years.

“We’ve gotten to a point now where we want to make certain we appeal not only to a younger generation, but the next generation, without alienating our current core demographics,” Loftis says. 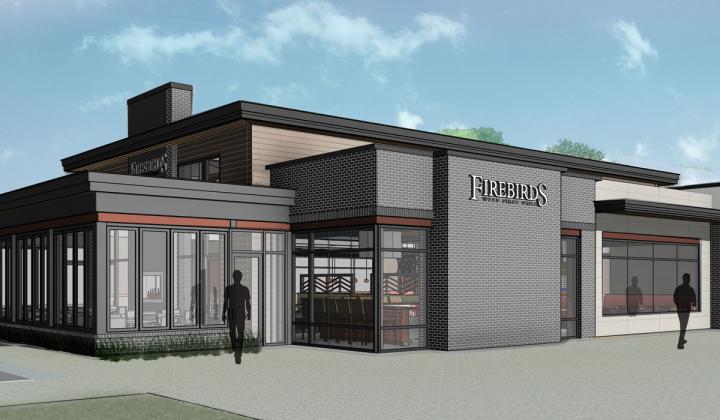 The new Firebirds exterior will be environmentally and visually appealing.

This balancing act of promoting the classic details along with the modern ones is all about celebrating Firebirds’ standout characteristics, everything from culture to culinary to operational notes. To start, the prototype, developed with local company starrdesign, was inspired by fire and smoking firewood, which is the visual and flavorful heart of the concept, known for its scratch kitchen and wood-fired grill.

The changes to the exterior are instantly noticeable. It begins with an open façade featuring floor-to-ceiling windows and warm, contemporary materials that are, again, inspired by a wood fire. Flashed and charred black brick, rust-exposed steel, a dominant chimney, and wood soffits and overhangs produce a warm, glowing appearance. An enclosable, multi-seasonal patio, complete with accordion doors to open and close during the seasons, will also endorse an airy-ness some of the older models lack.

The interior changes were all deliberate as well. At current locations, guests step through the door and have their attention directed quickly to the left. Meanwhile, the concept’s celebrated FIREBAR sits on the right.

Now, the FIREBAR will emerge directly in front of a customer coming in, serving as a cant-miss focal point that delivers on multiple fronts. Not only is it a section, Loftis says, where Firebirds separates itself from the restaurant pack, but it also showcases a convivial, community-centered atmosphere that turns the area into much more than a waiting dock for guests hoping for a table.  “It’s really become a neat social place where folks come and congregate. Enjoy a meal. Enjoy a cocktail and have a good time,” Loftis says. 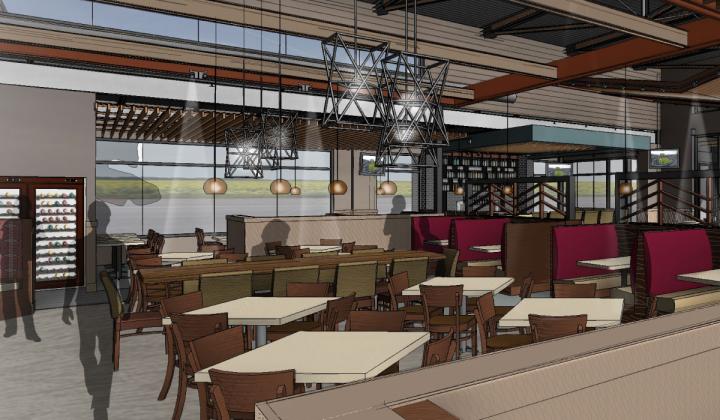 Firebirds' dining room features sightlines from every angle to the open kitchen.

The FIREBAR even features a charred, Shou Sugi Ban bar top, and a waterfall bottle display framed in charred brick. The fact Firebirds chose to ditch the common marble surface and go with something that looks, well, burnt, was another example of how Firebirds’ new prototype lasers in on its DNA.

In no place, however, is that more accurate than the new dining room. The open concept was built to offer a view throughout the space of the wood-fired grill and exposition kitchen, no matter where the guest is sitting.

Firebirds also positioned a 12-seat community table in the middle of the restaurant.

Additional interior details include abstract artwork, contemporary décor, and lighting fixtures, as well as light-colored wood and paint offsetting charred black brick, and neutral carpet with a bark-like pattern. There are illuminated, inverted steel trusses, hanging wood beams, and a wood-slat ceiling as well. The color scheme is brightened up with pops of teal (fitting in a city home to the Jacksonville Jaguars) to complement the brand’s signature reds and oranges.

Another area Firebirds recognized as perhaps a missed opportunity was its wine collection, which is always stored at the proper cellar temperatures. “To this point, for whatever reason, it’s unintentionally been hidden within the restaurants, even though there are coolers on both sides of the fireplace,” Loftis says. “In the newer prototype it is a prominent feature and you can’t miss it. When you walk in it’s right there to the left, kind of near the FIREBAR. Something we really wanted to showcase because we take great pride in it.” 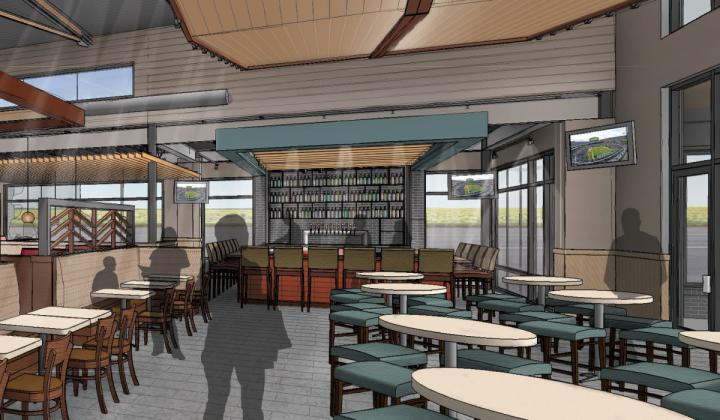 The FIREBAR is going to be a main attraction in the new design.

Firebirds also took key steps to ensure the prototype was environmentally responsible. The windows feature a thermally broken storefront system with ultraviolent- and infrared-blocking tinted glass. The roof has deep, 2-foot overhangs over most windows. There is LED lighting throughout the interior and exterior, and a dimming system with controls designed around daylight zones. The flooring is made with recycled content in some tile sections. Carpet and carpet backing is partially constructed from recycled content such as fishnets. The kitchen also has solid fiberglass exterior walk-in coolers with higher long-term energy efficiencies.

On the outside, the building used nichiha exterior panels, hardie board siding containing recycled content, and a energy-efficient building envelope with an insulation-filled cavity.

Just like in the past, Firebirds plans to monitor these vast changes and see how guests respond. Based on the data, the concept can retrofit certain details into older stores and decide which need tweaking for future openings.

“We’ll learn from this,” Loftis says. “We’ll open up here in early November and based on the feedback and based on certain key metrics, we’ll take that learning and adopt not only into new restaurants moving forward as we continue to progress and grow the brand, but, yes, also come back and retrofit existing locations.”

The menu at the Jacksonville store will also fit its market, as do many of the Firebirds locations around the country. Some signature items include: Fresh Catch Tacos, Wood-Grilled Jumbo Mayport Shrimp, and the Crispy Flounder Sandwich.

Firebirds is evolving its business in other ways these days. The company announced in early October that it launched online ordering powered by Olo at all locations. The move deepens Firebirds’ commitment to off-premises business and digital hospitality, where the company’s ToGo service and loyalty program—the Inner Circle—are already key parts of its offerings. Firebirds is also a member of OpenTable’s growing network.

The new prototype molds to some of these services, and Loftis says that could grow even more involved in time. There is a dedicated pick-up area and a section in the kitchen to prepare these items and package them for guests.

“It is a focus here, and as we progress this prototype moving forward it will certainly be even more of a focus,” Loftis says.