Jaggers currently has three stores after opening one in December.

New locations are already in the works.

Promoting Jerry Morgan to president of Texas Roadhouse in December freed up CEO and founder Kent Taylor to focus on fresh ideas, he said Thursday. And it's something competitors should take notice of.

Taylor, who shouldered president duties since Scott Colosi's retirement in June 2019, has already been busy. Not just in the steakhouse realm, either.

“We've been very successful in the full-service world, so why not retail and fast food, too?” Taylor said.

In 2021, Texas Roadhouse expects to open 25–30 company restaurants, including as many as five Bubba’s 33 locations, and one Jaggers. The latter debuted its latest store in early December and “continues to perform way above our expectations,” Taylor said.

“We have a few more company-owned locations already in the works for 2022, and we will continue to explore potential franchise opportunities,” he added.

There are now three Jaggers—in Louisville, Kentucky (the recent one); Noblesville, Indiana; and Indianapolis. It’s not unlike Texas Roadhouse to spread locations when building a brand. It did the same with Texas Roadhouse in the 1990s when it had stores in Cincinnati, Ohio; Sarasota and Clearwater, Florida; and, of course, the original Clarksville, Indiana, unit. Taylor even bought a PO box in Dallas just so he could put a Texas address on comment cards.

Taylor has always had a penchant for big ideas. He famously tried to shake things up as a KFC manager by making sandwiches and offering bottled water. He left before trouble caught up to him. Taylor’s first solo venture, Buckhead Hickory Grill (now Buckhead Mountain Grill), arrived in 1991 and is still in operation. He sold his interest three years later, a year after launching Texas Roadhouse with a $300,000 investment from three Kentucky doctors.

Jaggers, boasting a menu focused on burgers, chicken sandwiches, tenders, shakes, and salads, sprung to life in 2015. Taylor told the Louisville Business Journal it was built around the idea of, “What if Chick-fil-A and Five Guys got married and had a kid?” Essentially, taking three category staples—chicken, burgers, and salads—and trying to be best-in-class at all of them.

And it brought Taylor back to quick service for the first time in three decades.

Taylor picked Indianapolis as the first location so he could drive over and check in. It’s a 3,000-square-foot venue built atop a parking lot that, fittingly, was once a Texas Roadhouse before relocating.

Why Taylor sees whitespace with Jaggers isn’t complicated. COVID-19 did a lot of things in the past year or so, but it’s undoubtedly lit the ignition on convenience and to-go preference among consumers. It’s simply a good time to get in the fast-food business.

What’s interesting to note as well, is Texas Roadhouse’s makeup as a company. The brand has 503 corporate Texas Roadhouses and just 69 franchises (there’s another 28 internationally). Bubba’s is entirely company-run.

So Jaggers not only dips Taylor’s expertise back into counter service, it creates a franchising vehicle the company has never really had before. Or at least has chosen to mostly avoid with Texas Roadhouse and its managing partner system.

Taylor brought the notion up only one other time Thursday, to say, if Texas Roadhouse takes this route with Jaggers, they’d be looking at “additional sales without the cost of developing sites.” He was answering a question on the overall landscape of development, with COVID closures tossed in, and how construction costs continue to rise despite real estate coming up.

What Texas Roadhouse might save in rent, in other words, would get offset by increases on materials, like concrete and lumber. Even trades such as plumbing, HVAC, and electric, are going up.

It’s something likely to squeeze corporate development industry-wide in the coming months. Franchising, however? That’s a bit of a different topic, although how it shakes out in COVID’s wake isn’t certain, either. Much of of it boils down to which brands are aggressively stockpiling cash and where investors and firms see runway, as well as how money moves behind the curtain with M&A, bankruptcies, and other developments still to come. There remains a lot of debt and a lot of opportunity, and plenty of questions.

Taylor said his efforts of the past six months “sets us up for future growth over the next decade.” He’s hinted at this before. BTIG analyst Peter Saleh believes the future could hold “several hundred locations at a minimum” for Bubba’s 33 alone.

Jaggers is really a mystery at this point, however. But that’s not necessarily a roadblock. Both Bubba’s and Texas Roadhouse stores average north of 7,200 square feet per unit. It cost the company $6.1 million to build a Texas Roadhouse in 2020, up from $5.5 million in 2019 (thanks to those construction costs). Bubba’s 33 was $6.7 million in 2019.

As successful as Texas Roadhouse has been over the years, those figures keep boom targets tempered. Although Saleh projects 800–1,000 locations in the company’s eventual future thanks to a new growth path focused on smaller markets. A lot of these lower-population areas are mostly served by independents, and generally less attractive to larger chain competitors.

Meaning, if industry closures are carried by independents this year, the current disruption could disproportionally impact smaller markets and open unit potential for well-capitalized operators. Or, put more specifically, it could swing the door wide for Texas Roadhouse, which diverted roughly a third of its development in 2020 to smaller markets—those with populations of 40,000 to 60,000. Taylor previously said the brand would continue targeting these areas. Even Bubba’s 33 plans to throw darts at less-dense markets.

Overall, there’s plenty of growth prospects for Texas Roadhouse. Jaggers might just be the wildcard nobody is talking about yet.

Not forgetting Taylor’s other project, he said Thursday the company recently signed two licensing agreements to expand its retail presence. The first is for a bottled version of its margarita mix. The second is for a canned cocktail seltzer that will be offered in a variety of Texas Roadhouse branded margarita flavors. Both are expected to hit retail sometime this year.

“These initiatives, together with our Butcher Shop business are low-risk and require minimal investment. We believe, over time, they have the potential to generate strong returns,” Taylor said. 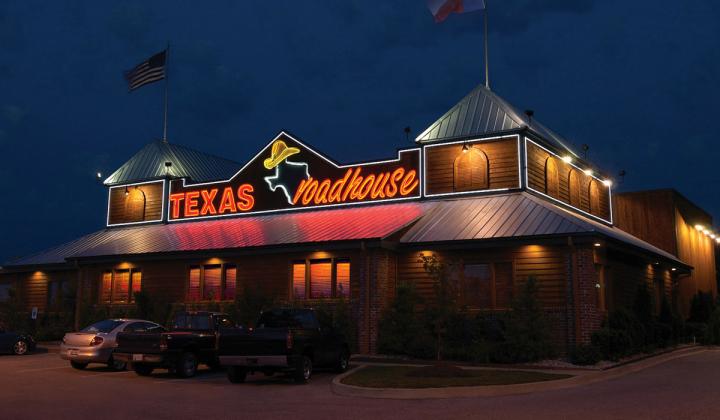 It's been a rollercoaster of results in recent months for Texas Roadhouse.

“The challenges we faced in 2020 were unlike any other”

Like restaurants across the country, this winter stretch was a wild one. October, November, and December same-store sales increased 0.8 percent, decreased 6.3 percent, and then fell 18.2 percent. For the full quarter, comps declined 8.9 percent at company stores and 11.2 percent at franchises.

Normally, these figures would seem like impossible swings. But these are strange times.

After October’s positive push, Texas Roadhouse had to reclose 90 dining rooms and layer in additional capacity restrictions at many others, starting in mid-November. Yet by the time the quarter ended, more than 98 percent of corporate restaurants returned some level of dining room capacity. COVID is simply an era with no baseline.

Sales have benefited from these reopenings and eased restrictions. Stores with limited capacity averaged more than $108,000 for the first seven weeks of fiscal 2021. And for restaurants with open dining rooms, to-go averaged just over $25,000 per week, or roughly 23 percent of sales, during that stretch.

Notably, restaurants with 75 percent and above are averaging slightly under $23,000 per week (20 percent of total sales). “So to-date, we are seeing minimal drop-off in to-go sales as indoor dining capacity increases,” CFO Tonya Robinson.

It’s the formula sit-down chains nationwide want to bank on: Dine-in business flooding back and to-go sales sticking around to some elevated degree.

January period, and the first even weeks of Q1

Texas Roadhouse installed windows in its “corral” and outdoor waiting areas to make it easier for customers to grab to-go food. It’s also introduced some technology into the experience, such as two-way texting so people can check in and known when their food is ready for pick-up.

At the beginning of December, there were 100 locations operating as off-premises-only units. There are just eight today. There’s 165 operating in the 75 to 100 percent capacity bucket.

Texas Roadhouse also moved its apps to a different platform in October and has seen downloads (this is true of Bubba’s 33 as well) rise in recent months.

Can Experience Win Back Diners? NextGen Casual is Banking On It
Hormel Foods Highlights Growing Culinary Trends
The Evolution of The Restaurant of The Future