Texas Roadhouse remains one of the industry's top-performing chains.

The thriving steakhouse chain hasn't changed all that much over the decades. Why? Because it hasn't had to.

Kent Taylor stuffed the proposal into an envelope and scootered his way to Ross Perot’s Bermuda vacation home. The billionaire and former presidential candidate was staying in a home tucked behind a gated community, but Taylor, the founder and CEO of Texas Roadhouse, has never been one to reverse course in the face of resistance. He told the guard his package needed a signature, and soon he was knocking on Perot’s door, looking for his restaurant’s next investor.

“I laid the proposal on the front door and never heard from them,” Taylor says.

Perot wasn’t the first, and definitely not the last, to overlook Taylor’s vision for Texas Roadhouse, a chain he founded in 1993 and has since scaled to 527 units with revenues north of $2 billion. There was the time he chased NBA legend Larry Bird through the airport in Louisville, Kentucky, only to watch Bird hop in a car and speed away. “He thought I was some lunatic or something,” Taylor says.

Or the day he brought ribs and beer to the offices of country music megastar Garth Brooks. “They took the beer and the ribs,” Taylor recalls, “but I never heard back from them.” 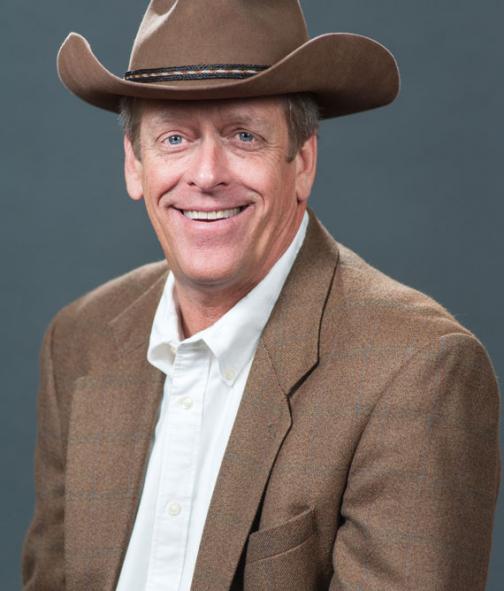 Kent Taylor opened the first Texas Roadhouse in 1993. He still has a poster that says "Persistence" on his office wall.

Even today, many of Taylor’s operational beliefs aren’t exactly industry standard. As Travis Doster, the company’s senior director of communications, explains: “If you said today to a bunch of investors that I want to open a concept, and we’re not going to do national advertising. We’re not going to open for lunch. We’re going to cut all of our steaks-in-house, and we’re going to serve 22 million in free bread and free peanuts, they’d say, ‘no thank you.’”

And just like those who doubted Taylor when Texas Roadhouse was in its infancy, they would be very mistaken. The chain posted same-store sales growth of 5.8 percent this past quarter at company-operated units (4.7 percent at 70 domestic franchised), making it 32 consecutive quarters of positive comparable restaurant sales growth. Guest counts rose 3.5 percent for the year and traffic climbed 4.7 percent in Q4, year-over-year.

If you’ve followed the casual-dining headlines in recent months, beside these numbers sounding like fabled results, you know trends come in buzz-worthy waves. Off-premise and delivery? Taylor once told a call full of investors that he encourages competitors “to do as much delivery as they can so they can deliver lukewarm food to their people that order it.”

Limited-time offers? Texas Roadhouse’s museum, which showcases its history, has menus on display that look remarkably similar to what’s being dished out today.

In fact, Texas Roadhouse’s No. 1 selling item, its 6-ounce sirloin, has been its top-ticket draw for 25 straight years—since day one if you’re counting.

When asked about the last big menu change, Doster pauses before answering. “We added a steakhouse filet salad,” he says. “That was one of the more recent ones. That’s been four or five years.” 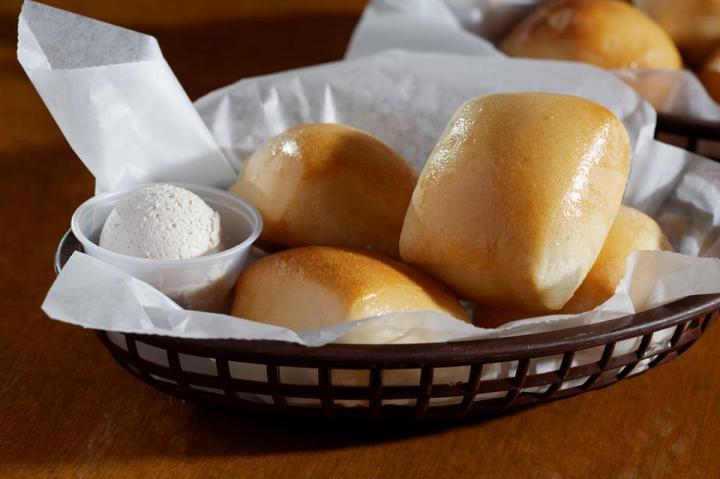 Free bread at Texas Roadhouse. Along with free peanuts, it's a fact that will never change.

This isn’t about a stubborn nature. Taylor and Texas Roadhouse simply know what works and are not interested in rocking a boat that isn’t sinking. “We focus on what we can control, and you know, a lot of people seem to not understand that,” Taylor says.

To fathom where this comes from, it’s worth rewinding back to the beginning. Taylor worked at casual-dining icon Bennigan’s from 1983–1989, before heading over to KFC. At both stops, Taylor earned a reputation for being a bit of a rule breaker. He liked to experiment with recipes and stray from the blueprint, devising made-from-scratch items he thought customers would enjoy. At KFC, Taylor even sold bottled water and crafted a chicken sandwich before these things were anywhere close to mainstream. “He thought he was doing a great job,” Doster says, “because guests were loving it. But then his bosses came to see him.”

It was clear Taylor had the makings of a bridled entrepreneur eager to break out. But it’s this background, Taylor says, which shapes so many of Texas Roadhouse’s current practices. He knows how the flow works at the fry stations, the salad stations, the broiler stations. Taylor doesn’t have a background in finance or marketing. He’s a straight restaurant lifer who knows the ins-and-outs of how food comes together and goes out the window, as he says.

“A lot of times I believe decisions are made that don’t really take into consideration how the restaurant actually operates,” Taylor says.

Taylor also carried Texas Roadhouse to the summit by surviving the gauntlet of early restaurant ownership. Three of the first five locations failed. The biggest issue was real estate. Texas Roadhouse opened initially in conversion buildings, including an old Western Sizzler, across the map in a way you couldn’t connect the dots unless you felt like drawing abstract art. There was a Cincinnati, Ohio, store. One in Sarasota and Clearwater, Florida—those to balance the original Clarksville, Indiana, location.

In 1996, Taylor tossed aside the playbook and decided to build a prototype with George Lask. This unit, which opened in Texas Roadhouse’s home base of Louisville, Kentucky, still looks like the stores built today. Take away the kitchen upgrades and Texas Roadhouse’s bar remodel—a move to open the concept and allow sightlines throughout—and it’s pretty much a replica.

In addition, back in those days, Texas Roadhouse had to prove it could carry the branding of a region where subpar beef will get you excommunicated from the religion of The Lone Star State. Taylor knew he had the culinary know-how and dedication to quality, but consumers can be a fickle breed when it comes to image.

His solution: Despite being in Louisville, Taylor secured a PO box in Dallas and put the Texas address on all his comment cards.

“I have no idea why I did that,” he says, laughing. “I could make some stuff up but I don’t remember. It worked.” 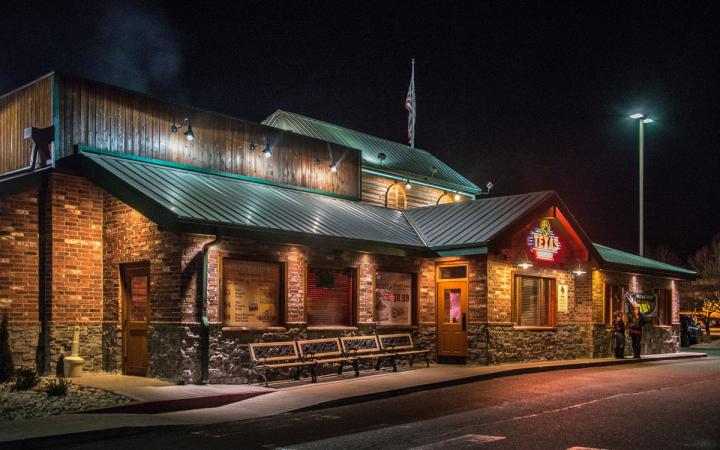 Texas Roadhouse looks pretty much the same as it has since Kent Taylor redesigned the prototype in 1996.

Ever since reimagining the prototype, Texas Roadhouse’s growth sizzled. The concept serves an average of 6,000 guests per week and stores are pushing $5 million in average-unit volume. This traffic is one reason Taylor says Texas Roadhouse doesn’t view delivery through the same lens as some of its peers. “We’re on a wait typically seven days a week, so I do not need delivery to fill in the gap, because we’re already very busy,” he says.

And Texas Roadhouse has been a model of financial stability. For five-year compounded-annual growth rate, totaled revenues are up 2.1 percent. Operating income 11 percent to $186.2 million. Net income increased 13.1 percent to $131.5 million. AUVs have climbed 3.9 percent. In fact, across the board, from diluted earnings per share (13.1 percent) to average restaurant gross square feet (0.4 percent) to average sales per square foot (3.8 percent), there isn't a negative drop to be found.

The overall experience plays a leading role in this success, Taylor says. Hand-cut steaks. Warm plates. Cold salad bowls. Friendly service (line dancing), and other factors are so uniform across Texas Roadhouse’s system that it boggles some competitors and even investors. This past quarter’s industry-fronting results didn’t even shift the needle much on the stock market since Texas Roadhouse is nothing if it’s not consistent.

How the brand keeps this quality and performance legendary, as its tagline claims, is another day one detail. Texas Roadhouse’s operators put up $25,000 (the first forked up $30,000 because Taylor was low on startup cash) and get 10 percent of the store’s profits.

This partnership model, Taylor says, separates Texas Roadhouse from its competitors who don’t offer a similar deal. There’s nothing complicated here as far as why it works, and why it’s been successful for nearly three decades.

“If you think about it, Kent wanted to serve food he was proud of. Well, the men and women running our restaurants, they have that same mentality,” he adds. “They want the restaurant clean. They want to serve food they’re proud of. They can create their own paycheck in a sense the more successful they are.”

In this past fiscal year, labor as a percentage of restaurant sales was 135 basis points higher than the prior-year period and total labor dollars per store week grew 9.5 percent, and the company is expecting mid-single-digit labor inflation in 2018.

Doster says Texas Roadhouse is looking at some ways to ease the burden, but, for the most part, it’s just a side effect of their success. And working at Texas Roadhouse is definitely an experience unlike many others in the restaurant game.

For example, line dancing started in Ashland, Kentucky, and has morphed into one of the chain’s signature traits. Texas Roadhouse even hosts a line-dancing competition each year for its restaurants, where the winners come to Louisville and receive rock-star treatment. It’s the same with meat cutters. Every year, the brand’s top meat cutter takes home a $20,000 bonus.

“So all of this stuff just kind of bubbles up and I think that’s one of the things that’s attractive about working with us,” Doster says. “Kent always says happy employees make happy guests make happy accountants.”

Texas Roadhouse has never had to shed the stodgy, velvet booth image so many steakhouses grapple with. Taylor understood the importance of ambiance from the outset. Texas Roadhouse sets the tone with music and a family-first atmosphere where guests can come, be loud, laugh, and never worry about stealing a glare from the pretentious couple cutting through steaks and silence at the nearby corner booth. It’s another reason Taylor doesn’t want the typical guest ordering steaks to their couch. Texas Roadhouse isn’t eager to dilute its brand or misrepresent itself.

“You can’t package the service element and the atmosphere element into a bag that delivers to your door,” Taylor says. “The folks that are talking about delivery have potentially given up on having full restaurants inside.”

Looking ahead, the international aspect is one that excites Taylor. He says they’ve gone about it slower than some since they’re only interested in markets capable of hosting 10-plus Texas Roadhouses. And Bubba’s 33, of which there are 20 corporate stores, Taylor says the company is ready to inject superior service and food into the sports-bar arena.

But regardless of which initiative you focus on, Taylor will approach the task with the same care as those days when he had more ambition than cash in his pockets. And, hey, if you’re interested in joining the ride, chances are he’s still carrying a proposal or two around.