Bar Louie has returned to profitability.

Inside Bar Louie’s Emergence from Bankruptcy and $82.5M Sale

The gastropub has closed 60 locations since January.

Howard Meitiner, managing director at Carl Marks Advisors, was in the midst of a lively meeting with Bar Louie’s management. He asked them to leave the room and brainstorm how many restaurants they could envision closing. Afterward, the parties would compare lists. But before doing so, Meitiner threw out a number of his own—somewhere in the range of 40.

“There was initial shock,” says Meitiner, who was serving as the chain’s chief restructuring officer. “But I did that because I didn’t want them to come back with eight or nine.”

Bar Louie ended up shuttering 38 locations as it filed for Chapter 11 bankruptcy protection in January. And more recently, with COVID-19 looming, the company closed another 22. Meitiner says Bar Louie realized it would take years, not months, for those units to return to acceptable profitability.

Before filing in January and slimming its footprint, Bar Louie had 134 locations. Today there are 73 (50 company-run and 23 franchises). On April 27, the company received approval for a sale to secured lender Antares Capital LP, which assumed control from BL Restaurants Holding LLC and acquired $82.5 million of debt. The sale forgave Bar Louie’s secured debt and allowed it to temporarily put off landlord and vendor payment issues.

At the time of bankruptcy, Bar Louie reported assets between $50 million and $100 million and owed roughly $110 million to creditors. Sysco held the biggest unsecured claim at $3,046,275.52.

On May 27, Bar Louie told a Delaware bankruptcy court to cancel its planned auction. It was ready to move forward with the sale to Antares Capital LP, which had served as stalking horse bidder. Bar Louie informed the court no other qualified buyers came forward.

The gastropub emerged from bankruptcy at the beginning of June.

Meitiner and Carl Marks Advisors’ role in the process, however, began well before Chapter 11. Bar Louie engaged the firm in September 2019 to conduct a strategic review. Meitiner took on the role of chief restructuring officer January 23.

The good news, he says, was Bar Louie was essentially a profitable business, and was generating good EBITDA. But like many brands on the brink of bankruptcy, it was burdened with debt.

Bar Louie’s tale was not an unfamiliar one. In previous years, it primarily drove sales and profit through new-unit expansion. Yet this practice mounted concern. The company funded growth partially through new debt, but also with cash flow from operations.

Bar Louie, founded 1991 in Chicago, grew to 31 stores by 2010, when it was acquired by its previous owner. Over the course of the next nine years, it ballooned to 110 corporate restaurants and 24 franchises in 26 states.

Suddenly, when a host of underperforming locations began to drag the system, Bar Louie didn’t have enough cash on hand to fix them.

The chain was left with an “inconsistent brand experience,” it said in the filing, resulting from restricted liquidity otherwise needed for store refreshes, equipment maintenance, and modernization.

But for Meitiner, a turnaround guru who previously helmed Phoenix House, the largest nonprofit organization at the time, there was clear silver lining.

This included a Louie Nation Loyalty Program, the construction of private dining rooms, adding covered patios to limit the impact of weather on outdoor seating areas, store-level planning sales managers, and corporate gift card partnerships. For 72 of the company’s 110 corporate locations, the program was returning quick results. The lagging units, though, forced a reduction of expenses and other investments—a step back felt throughout the entire organization.

And here’s where the lack of available liquidity surfaced. Bar Louie had a proven blueprint to boost performance, but no investable capital to make it happen. So a broad roll out of initiatives to other locations was put on hold and Bar Louie couldn’t implement further marketing related to these updates compared to competitors.

While Bar Louie’s same-store sales declined 4.2 percent in 2019, with revenue (12 months ended December 31) down 3.7 percent, year-over-year, to $252 million, the 38 initial closures generated a loss of $4 million last year. Comps at those venues dropped 10.9 percent. If you remove them from the equation, Bar Louie’s corporate system witnessed just a 1.4 percent decline in same-store sales, with runway to gain from new tactics. Additionally, the bulk of sales declines occurred as late as Q4 2019, “when financial conditions and a lack of liquidity forced management to significantly reduce marketing spend,” the company said. 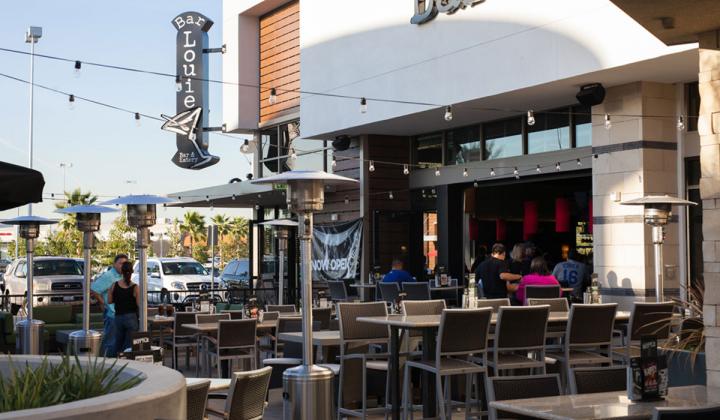 Bar Louie's patios were proving successful even before COVID-19 landed.

As it began to look for buyers (101 potential strategic buyers and 153 financial buyers were initially contacted, with 73 executing confidentiality agreements), Bar Louie continued to suffer a drain on cash flow from struggling units. It soon became apparent liquidity troubles would require a sale process to continue in a Chapter 11 arena.

Another challenge was Bar Louie’s real estate amid a general decline in traditional mall traffic.

“What we were able to do was to outline through the constituencies involved that, at its heart, this was a good business,” says Meitiner, now a Bar Louie board member.

Carl Marks Advisors assisted the company in securing bridge funding. And part of the task was to refine operations and prove Bar Louie could generate a return for its lender on the other side.

Meitiner says the chain’s comeback strategy had legitimate legs for the future. “This was a viable business that was making profit,” he says. “But it had two problems: It was burdened by debt servicing and it had [38] locations that were not profitable.”

“So imagine then how profitable the other locations were that not only were they able to offset the losses from the unprofitable locations, but they were able to generate a decent EBITDA,” he adds.

Once again, the unique nature of Bar Louie’s situation came into focus. Management had answers, which is seldom the case in these turnarounds, Meitiner says. It just didn’t have any capital to implement them.

Yet there’s no question the case draws a cautionary tale. Meitiner served as president and CEO of retailer Sephora in 1998 when it entered the U.S. market. In 2020’s first quarter, it threatened to close 600 locations (inside J.C. Penney stores) before coming to an agreement to keep them open. Retraction is far from an uncommon reality in retail or otherwise, and it often stems from similar missteps, Meitiner says. “The thing I would say is location and store growth must follow a strict adherence to objective site assessment prior to any decision being made to sign a new lease for a new location,” he says. “And this must include local-market restaurant, evaluation of competition, site visits, and visiting competitors to really assess the ROI and financial model.

“And when you look at businesses that end up having to close lots of location, they did not adhere to that discipline.”

Bar Louie invested so heavy in new stores that it couldn’t invest as much as it needed in things like IT systems and infrastructure. It’s the notion of keeping your powder dry so you can put money into areas you know work. Like patios, for instance.

“You need to make sure you have a really efficient operating base. That’s what distinguishes winners from losers,” Meitiner says.

So what happened when COVID-19 entered the fray?

Bar Louie acted early and aggressively to shut down stores, maintaining a core staff of three per venue.

For the first time in brand history, Bar Louie partnered with third-party delivery platforms. Today, it works with six. The company progressed from basically no delivery revenue to it representing 15 percent of sales. Meitiner says Bar Louie stood the system up in four weeks.

It’s also dove into the ghost kitchen pool. The chain is currently working on a virtual concept, Sweet Lou’s. Focused on wings, dessert, and sandwiches, it’s piloting in Dallas and Cleveland, with future markets on tap if all goes well.

Bar Louie resized its corporate office and moved into more of a shared workplace. “As we got through to the end of the bankruptcy period and revenues kept increasing, we hired behind those revenues, we didn’t get ahead of it,” Meitiner says. “So we were able to operate well within budget. And importantly, it provided the lender group with the confidence that their support of the business had been warranted.”

There are new marketing partners, particularly social media marketing. “All of these things would have happened, but they wouldn’t have happened in the timeframes they ended up happening in,” Meitiner says of the COVID-19 effect.

Closing the additional 22 stores was a very similar process to the original 38.

The brand planned to open about 15 units per year before 2020’s bankruptcy. Meitiner expects a more measured approach moving forward, especially as the pandemic lingers. While the brand has climbed out of the red and back to profitability, guarding near-term strengths will lead it through crisis times and beyond, Meitiner says.

“It’s building around the 50 locations, building those ghost kitchens, broadening the delivery business, making the core locations even more profitable,” he says.