Bar Rescue’s Jon Taffer: The Future of Restaurants Will Be Led by Trust

Right now, operators in the restaurant industry are focused on staying afloat and making it through the next few weeks.

Jon Taffer, star of Bar Rescue and owner of full-service concept Taffer’s Tavern, understands the pressure. But he’s concerned that not enough restaurateurs are thinking about the post-pandemic future.

“What I’m worried about is that not enough of us is focused on what’s going to happen after these next few weeks,” Taffer says. “What does the reset look like, and how does our industry look coming out of this?”

Taffer foresees a significant shift in the industry. Using himself as an example, Taffer says that in the past, he’d go to restaurants because of their food quality. That won’t be the case going forward—not only for him, but most consumers, too, he explains.

Instead, he is going to eat at the brands he trusts the most, even if the quality isn’t as high.

“This industry is now going to be led by trust. Not products. Everything is going to be about trust and transparency,” Taffer says. “So that changes the game as far as restaurants are concerned.”

Although governments may lift stay at home mandates, Taffer says there will be a consumer expectation that restaurants spread their dining rooms and bars to create distance.

“If you cough today, it’s like you’re a criminal,” he says, describing the paranoia caused by the COVID-19 outbreak.

He estimates that chains will have to reduce capacity by 40 to 60 percent. Servers will no longer be able to bring food to guests and bus tables at the same time. The new normal will require designated food runners to have the sole responsibility of transferring food from the kitchen to the table.

The hospitality mogul also envisions a reduction in menu items to reduce complexity and improve quality, uniforms for kitchen staff, and security cameras in the kitchen to enhance transparency.

Taffer recalls seeing an image on social media of a cook in a kitchen laying lasagna in a pan while wearing gloves, but in street clothes with no hat and no mask. He believes those standards won’t be accepted by guests after the pandemic.

“Those are the images that will destroy our industry if we don’t understand that our customers now expect the transparency to trust us,” Taffer says. “Everything about a restaurant today is trust. And there is nothing that is more important than trust. I have to trust that you have people in the kitchen that are completely sanitized. … Kitchens can’t have street clothes anymore. People won’t accept it. We can’t wear baseball caps from home when we’re cooking on the line.”

"There needs to be some bridging as restaurants start slowly to build and get back to a normal operating scenario," Jon Taffer says. "I think if we start with 40 percent less seats, I think in a month or two, we add a table. In another month or two, we add another table. I think we eventually move out of this once we have a vaccine and get it under control, but I don’t see that happening very very quickly, so we have to step up.” 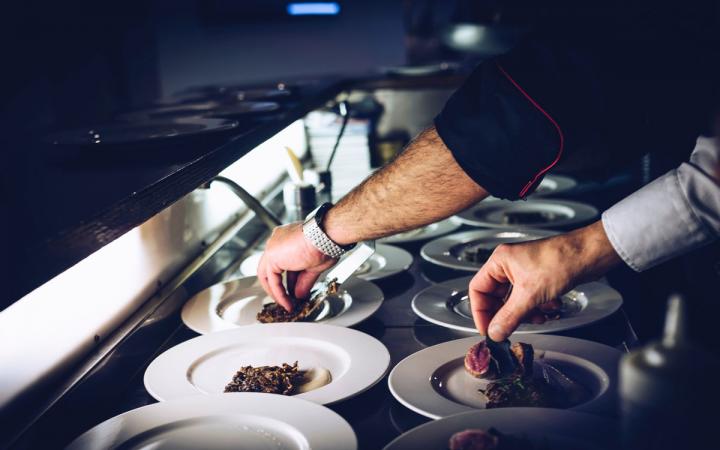 If your restaurant wasn't known for sanitary measures before, it might be time to change that.

In addition, he believes cities should allow more outdoor seating to offset the lower in-restaurant capacity.

“Somebody has got to emerge in the next few weeks and months as owning the premise of clean and safe,” Taffer says.

While Taffer believes brands must spend more money on creating an image of cleanliness, it doesn’t mean restaurants should shift focus from their food product.

At Taffer’s Tavern, all the kitchen equipment is built into the wall. The brand’s robotic kitchen includes only a couple of workers and doesn’t use raw product. The company utilizes sous vide cooking, a method in which food is vacuum sealed and then cooked over a long period at a low temperature. The cooking method, along with the equipment layout, results in cleaner kitchens, Taffer says.

“The sous vide Taffer’s Tavern concept we put together—we have 72-hour ribs that are the best you’ve ever tasted,” Taffer says. “Our burgers are to freakin’ die for. There is no quality loss when we use great cooking techniques like sous vide and other ways to maintain quality that are inherently clean. Sous vide is a powerful answer to some of these issues.”

Regarding the response from the federal government, Taffer says the CARES Act—which includes $349 billion in forgivable loans for small businesses—was a solid first step because it helps restaurants pay employees, rent, and utilities for eight weeks.

But like other independent operators, Taffer says restaurant owners need more to help restart their business. He would like to see funds to help restaurants replenish their inventory.

“… We also need to realize that restaurants might not be packed overnight,” Taffer continues. “There needs to be some bridging as restaurants start slowly to build and get back to a normal operating scenario. I think if we start with 40 percent less seats, I think in a month or two, we add a table. In another month or two, we add another table. I think we eventually move out of this once we have a vaccine and get it under control, but I don’t see that happening very very quickly, so we have to step up.”

Taffer says this is an opportunity for marketers to correct and reposition their brands. Companies that realign their operations and enhance safety protocols will exit the pandemic in great shape, but Taffer says those that refuse to adapt won’t survive.

Companies should start working on rearranging their business model now, Taffer says, and analyze how that affects their budget.

Nothing good will come to those who wait, the industry veteran insists.

“You don’t want to think about that the day this ends,” Taffer says. “You want to hit the ground running the day this ends. Everyone in this business should not be paralyzed by this right now. They shouldn’t be staring at the news all day. They should be working on their business models.”