Here’s One Way to Upgrade Your Offerings

Mediterranean diets have long been lauded for their apparent connection to longevity and reduced risk of diseases—including diabetes, cognitive decline, and osteoporosis. In fact, the Mediterranean diet was recently given the #1 overall spot in US News & World Report’s annual rankings.  For chefs, dishes that feature iconic Mediterranean ingredients such as extra virgin olive oil or tahini, for example, tend to be very popular with customers, who are increasingly seeking healthier options in the full-service space.

By incorporating more Mediterranean ingredients and inspired dishes on their menus, chefs and operators can capitalize on the growing global foods trend and also attract customers across demographics who have an increasing desire to eat good-for-you foods.

“One of our most popular banquet pasta dishes is an orecchiette with braised Swiss chard, garlic, olive oil, and fresh mozzarella,” says Michael Poompan, executive chef at the Ritz-Carlton in Denver. “It’s a simple dish that’s satisfying and easy to keep seasonal.”

At the recent Mise Conference for hotel chefs, Krasilovsky’s team demonstrated a Mediterranean bazaar concept, which featured a variety of pastas and regional flavors from France, Israel, Italy, and Spain. When menuing Mediterranean dishes, Krasilovsky recommends stocking up on fresh, seasonal produce—such as tomatoes, cucumbers, peppers, and eggplants in summer, and squashes, fennel, and citrus in winter. In addition, quality grains like pasta or legumes provide a solid base for serving these dishes, and can even be used in combination.

“Mediterranean ingredients are generally widely-available and familiar to customers’ palates,” Krasilovsky says. “And because this cuisine encompasses a wide geography—from Southern France and Italy to Turkey and Morocco—there’s also a lot to work with to keep flavors fresh, new and interesting.”

Put it on the Plate 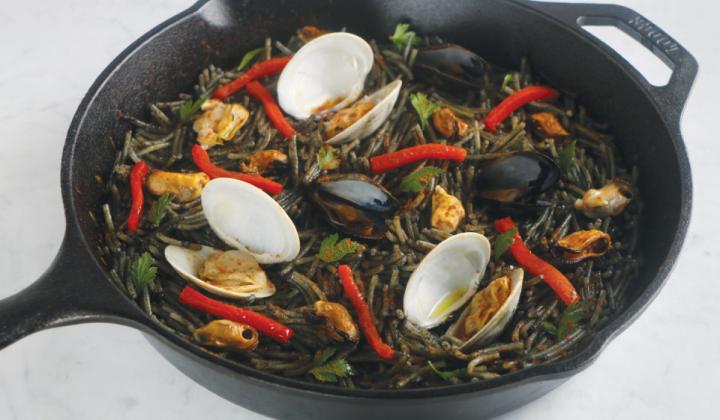 1. Bring a large pot of water to a boil and cook the pasta for ¾ of the recommended time, then toss with 1 tablespoon of the olive oil and place onto a sheet tray to cool down.

2. Add ½ cup each of the white wine to two separate pans, then add the mussels and clams. Cook until they are fully steamed open, then strain off the liquid into a separate container and set aside.

3. In a 12-inch cast iron skillet add remaining olive oil, garlic, shallots, and paprika, then cook over medium heat for 2-3 minutes. Add in seafood broth and squid ink and bring to a simmer. Add pasta and stir to combine. Top with piquillo peppers, clams, and mussels, then finish by baking for 10 minutes at 425°F. To serve: Remove from oven and dress with olive oil and parsley.