On the edge of acquisition, bartaco still knows what sort of experience it's looking to create for its guests.

This 2018 collection of 50 emerging chains with 50 or fewer locations offers plenty of insight into how a full-service restaurant concept can grow. We’ve got the numbers driving the most exciting chains—and tips that will help your growing brand chart its own world domination.

3 units With locations in Madison, Milwaukee and Washington, D.C., RARE Steakhouse has quickly established itself as one of the premier dining experiences in each market it operates in.

7 units Providing scratch-made, responsibly sourced American food isn’t new. Doing so under an ownership model that brings the farmers to the table—excuse the wordplay—is. The brand is poised to hit 10 units in 2019.

7 units All of The Ainsworth’s locations offer classic American fare, signature cocktails, and stimulating decor in a mixed space of restaurant, bar, lounge and events areas.

8 units Getting local is the Lion’s specialty—each location caters to its market, with queso in Texas and charcuterie in the Northwest. Giving guests a true gastropub experience is leading the Lion to expand.

8 units This chef-driven gastropub delivers an education in the art of food and beer. Is it the Bacon Cheddar Tots, known affectionately as “infamous” by the restaurant, that’s pushing the brand to expand?

9 units It has taken b Restaurants the last decade to expand to nine locations, but the next couple of years are heating up for the brand that was founded in 2006 around the belief that great food and drink bring people together.

9 units After its founding in 2010, Babalu has taken the Southeast by storm using hyper-local produce and products for its made-from-scratch dishes. Each Latin-inspired dish has unique Southern flair.

9 units Started in 1997 by three New Orleans chefs inspired by rotisserie cooking in Europe, Zea has continued to turn out fresh menus that delight guests at an affordable price point.

10 units The Italian brand landed in the U.S. with its headquarters in Miami and has locations in four states. Piola means “meeting point” in Piedmontese (a Venetian dialect) and is bringing Americans to the table for authentic, artisanal pizza.

10 units Pairing an upscale Italian-American menu with bowling and bocce has been a recipe for success at Pinstripes, which expects to expand to 15 units in 2019.

11 units Scratch-made Mexican cuisine and an assortment of tequilas are behind the Matador’s drive to develop new markets in its five-state footprint. 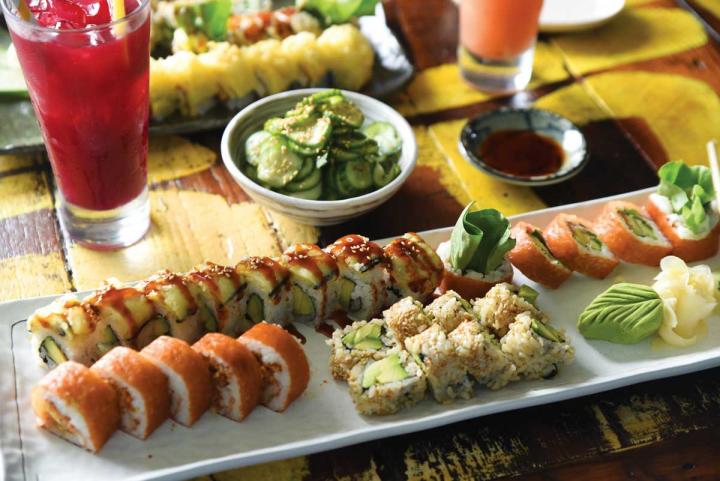 Blue Sushi is on a roll.

13 units This sushi brand is on a roll as it climbs the ranks closer to the 20-unit mark. Read more about Blue Sushi Sake Grill.

13 units Sauce is putting the fine in fine casual with its focus on quality food made fresh daily and looking to add six units in the next two years.

13 units How a fine-dining brand made its offerings more accessible and affordable—a move that’s been a success that keeps growing.

14 units Known as the fine-dining jewel in the Cameron Mitchell Restaurants portfolio, Ocean Prime is an ideal place to socialize, talk business, celebrate, or indulge, with a vibrant energy that is driving the brand forward.

14 units The casual yet upscale atmosphere at 110 Grill is complete with open kitchens, large horseshoe-shaped bars, and outdoor patios with fire pits. All this combined with dishes made from scratch on seasonal menus is propelling the brand.

14 units What’s brunch without a runny yolk? Yolk is a brunch brand that pushes the envelope with new ideas, creative breakfasts, specialty juices, private label premium coffee, and new locations that are hot and ready.

16 units The simplicity of the Cody’s mantra—“Just Plain Good Food”—is just what the diner ordered, taking the fondness for the familiar to its finest.

16 units After 20 years and 16 locations, The Flying Biscuit still maintains its quintessential neighborhood feel with its Southern-inspired comfort food menu. 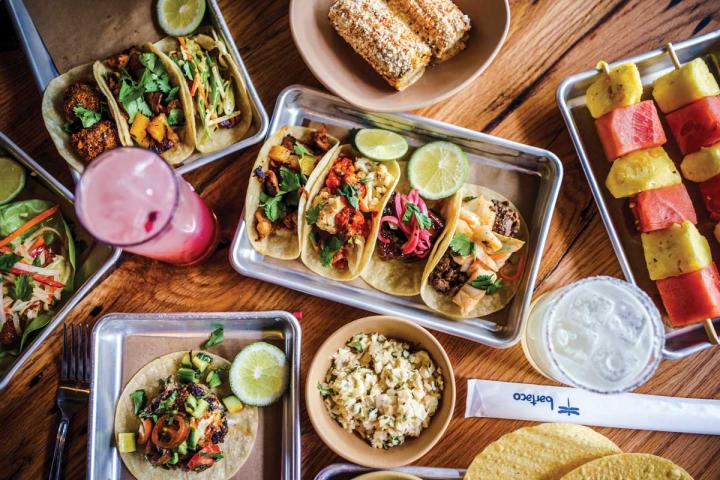 Bartaco is headed to the Del Frisco's portfolio of concepts.

17 units On the edge of acquisition, bartaco still knows what sort of experience its looking to create for its guests and is sticking to it. Read more about bartaco.

17 units It’s been 10 years since Arooga’s opened its first location in Harrisburg, Pennsylvania. The passion to offer guests more is still driving the brand as Arooga’s begins to offer the latest technology such as table payment and an app-based jukebox.

19 units A low table-to-server ratio is the trademark of concepts in the J. Alexander’s Holdings group, and nowhere is that more evident than in the signature brand.

19 units It’s game day every day at Walk On’s where Louisiana fare meets sports bar flair by a brand that aims to more than double its footprint in two years.

21 units Pizza, burgers, beer, and sports rule at Bubba’s, named for the founder’s nickname. Kent Taylor, founder of Texas Roadhouse restaurants, created Bubba’s in 2013 and has been expanding rapidly.

21 units Darden proves a corporate group can deliver fine-dining excellence with this upscale seafood concept that continues to expand.

22 units This over-the-top burger shop has a cult following and big plans to spread that cult around the globe. Along with international expansion, the brand plans to add 40 units in 2019.

23 units Founded in 2002, the sister company within the Cameron Mitchell Restaurants group calls itself a casual-dining experience, but each location features an executive chef guiding from-scratch menus.

23 units Realizing the need for authentic ramen in the U.S., Tokyo restaurateur Tomonori Takahashi opened JINYA’s first location in Los Angeles in 2010. Despite fast growth—12 new units this year and 25 planned for next—JINYA is known for a slow-cooked approach to ramen.

24 units Family-friendly casual dining and the high-energy sports bar vibe coincide at Boston’s, which has specialized in relaxing atmospheres and scratch food for over 50 years and is still growing. 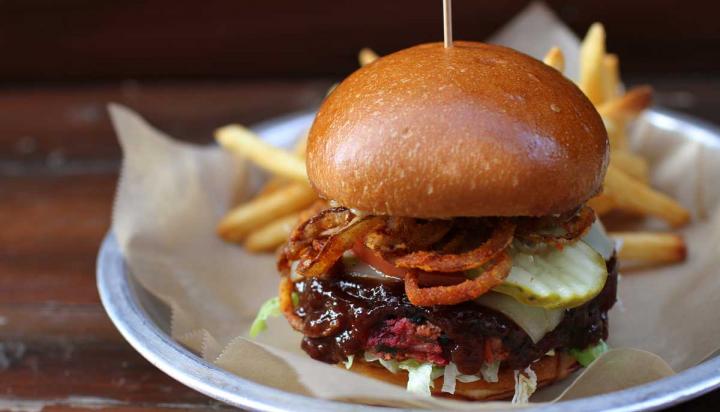 Lazy Dog is leading the next wave of casual dining concepts into the future.

26 units While the name lends itself to the casual atmosphere, the growth strategy at Lazy Dog is anything but lazy. Read more about Lazy Dog.

31 units Up from 20 units in last year’s FSR 50, Snooze is growing sustainably with the goal of being an asset to each of the communities it operates in.

32 units Best friends turned business partners Brian Burchill and Robert Maynard opened the first Famous Toastery in 2005 and quickly grew to three locations. Up 10 units from last year, the duo is crushing their goal to break through the otherwise boring casual breakfast segment.

33 units This family-friendly wing spot has been around since 1979 but is anything but old news. Coupling America’s longtime love of chicken wings with new strategies—a mobile app, loyalty program, online ordering, and third-party delivery—has proved to be the key to growth.

34 units This Florida sports bar has become a regional leader in top-quality casual dining with an emphasis on fresh ingredients and more than 80 TVs broadcasting endless sports entertainment.

37 units This modern Mexican spot has replicated its sophisticated atmosphere in 16 states, the United Arab Emirates, and the United Kingdom.

38 units The Abuelo’s story is simple—extraordinary flavor, impeccable service, and memorable experiences, all coupled with everyday value. The chain is fast approaching the 50 mark with two more units added each year for the next two years.

41 units Darden’s chic green brand with a focus on seasonal and local is steadily growing.

45 units Soon to be a graduate of the FSR 50, this contemporary-polished chain offering an energetic twist on the traditional grill is firing up each community it lands in.

47 units Due to grow beyond 50 this year, Bareburger has been banking on its no-funny-business attitude and reaping the rewards. The chain proudly serves its communities with the goal to make the whole world smile.