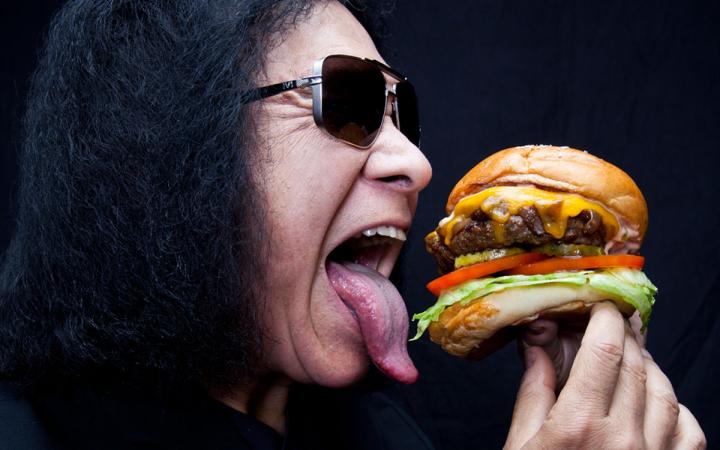 Gene Simmons and Paul Stanley, cofounders of the legendary rock band KISS, are also the owners of a budding restaurant concept—Rock & Brews. The restaurant opened its first store in El Segundo, California, in 2012, and has since grown to 21 locations, including in airports and stadiums, and two locations in Mexico.

Read more about the restaurant and its plans here.

With added leadership from fellow co-owners Michael Zislis, a brewmaster and restaurateur with more than 20 years of industry experience, and brothers Dave and Dell Furano, long-time concert industry and merchandising pros, the Rock & Brews concept has always been staged for success.

Here are some tips from Simmons, the legendary rock icon, on how to run a thriving business. 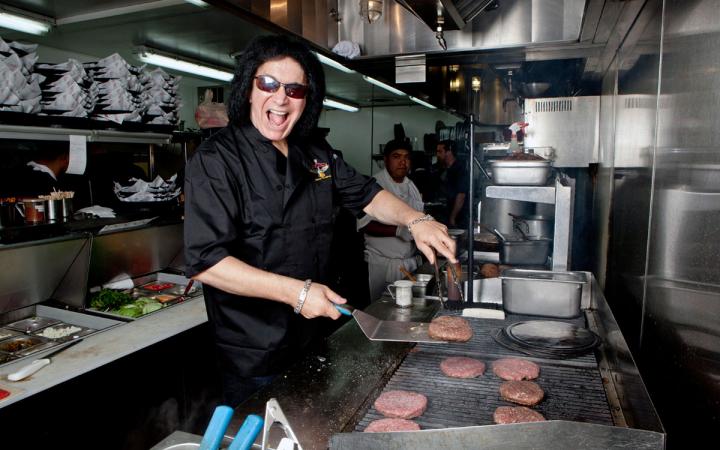 We All Work for the People

“You’re going to live and die by whether or not people like you—all of us, the pope, rock stars, rulers of countries—we all work for the people,” Simmons says. “If the people don’t like us we’re out of business.” 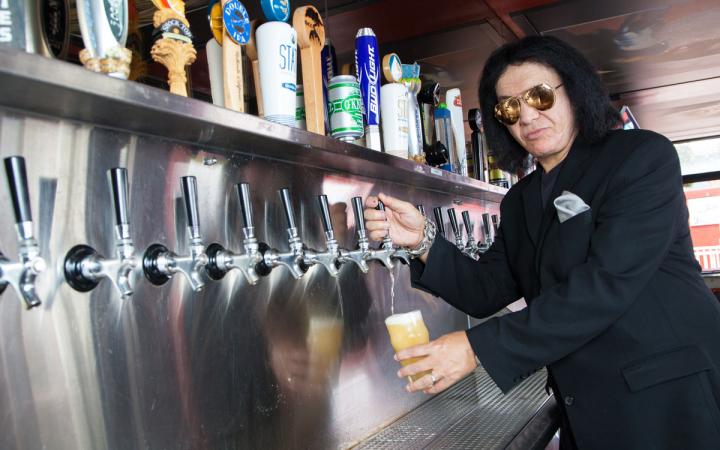 You Can Taste Test

“For those that like Heineken and the other beers you can find all over the place—those are mass produced, and there is nothing wrong with them, but neither you nor I believe there is one single brew master for the large brands. No, there are tanks full of them—enough to fill an ocean in there, so how do you keep the quality up? That’s what we try to do. We make sure all of our food is fresh, the beers are exceptional and unique, and you can taste test.” 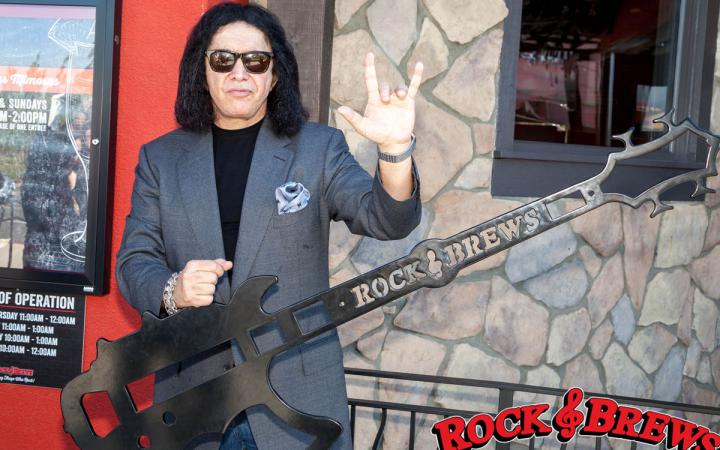 Guests are Doing Restaurants a Favor
“When you think about it, people are doing you a favor,” Simmons says. “It’s a privilege that somebody will take the time and fight traffic just to get to our eatery.”
5 of 17
Rock & Brews 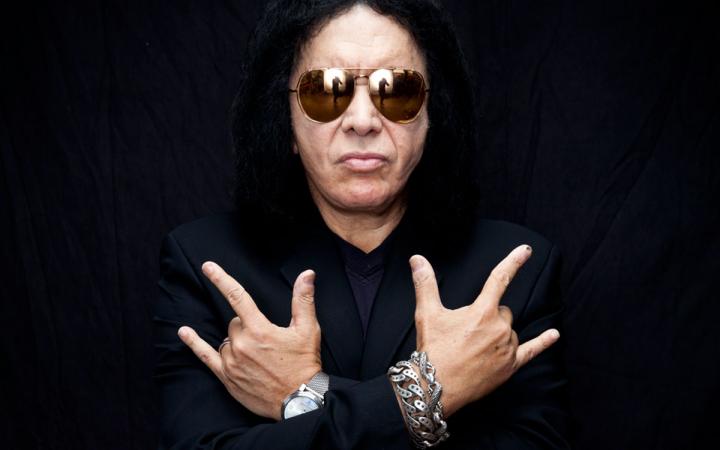 Take The Plunge
“Our restaurant is more than an eatery. It’s a meeting place because people use it for business. I officiated at a wedding at our Rock & Brews. Divorces happen there, marriages happen there, everything happens there.”
6 of 17
Rock & Brews 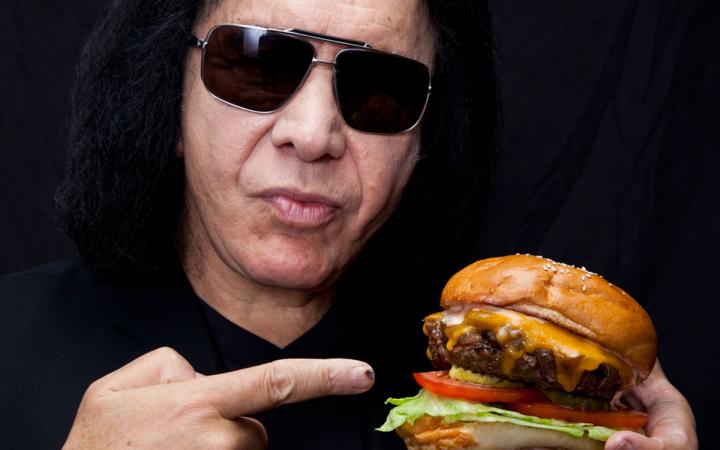 Shut Your Pie Hole
“On opening day of every Rock & Brews, Paul and I show up, close the door to the general public, and it’s only available for our military, and it’s dedicated to vets. We give them a big fat check, everyone stands still, shuts their pie holes, and we all say the pledge of allegiance.”
7 of 17
Rock & Brews 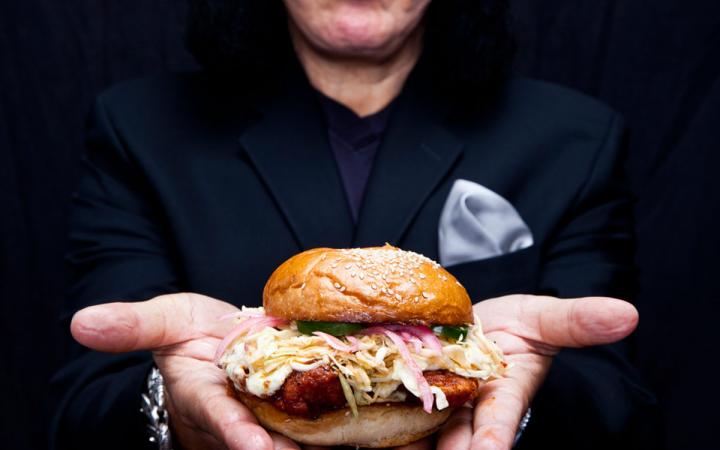 Why Not Have it All?
[On what it was like to transition from rock star to restaurant owner]: “Transition means you’re leaving one behind, and I think life is too short to make choices. Why not have it all? Transition nothing. You should be able to have your cake, eat it too, and swallow."
8 of 17
KISS 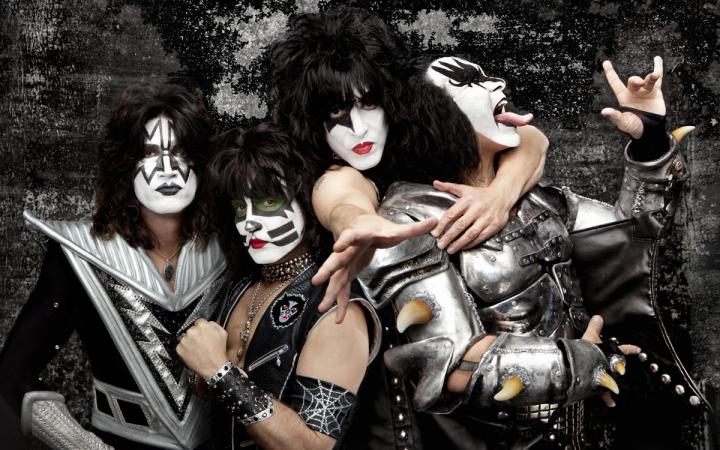 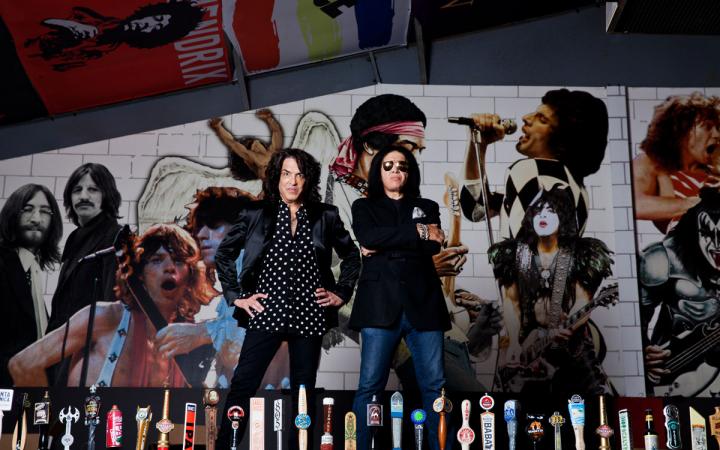 Don’t Micromanage (Ever)
“Don’t micromanage—We live in Beverly Hills, and we’re only as good as our local partners. You want a local partner who gets up every day, sends his or her kids to school in the neighborhood, and has a vested interest in coming into work and making sure everything is kosher, and I don’t mean dietary laws. To make sure that people are treated well, that the food is delicious, that the pots and pans are clean—there is a lot of painstaking work that goes into a restaurant’s success, and it’s not just about ‘this kale salad is out of this world.’ That’s nice, but there is so much preparation that goes before that to make sure the greens are crisp and fresh. We are dependent on our local partners. We make sure that Paul and I don’t micromanage and get in there and say, 'I don’t like the color gray'—it’s not about that. It’s about making sure that the local flavor and tone represent local culture.
10 of 17
Rock & Brews 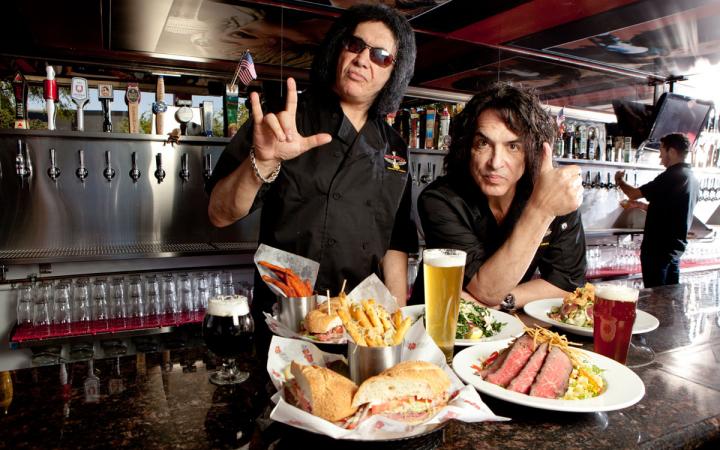 Area Code Awareness
“There is a difference between the southern states and the northern states, the eastern, and the western. The palette is slightly different. The farther south you go, the spicier it is and some people from the South go up to the North and say the food is bland to them. And, of course, the northerners that go all the way south to Texas, they get some hot peppers in their mouth and aren’t used to it, so you have to be sensitive to the area you are from.”
11 of 17
Rock & Brews 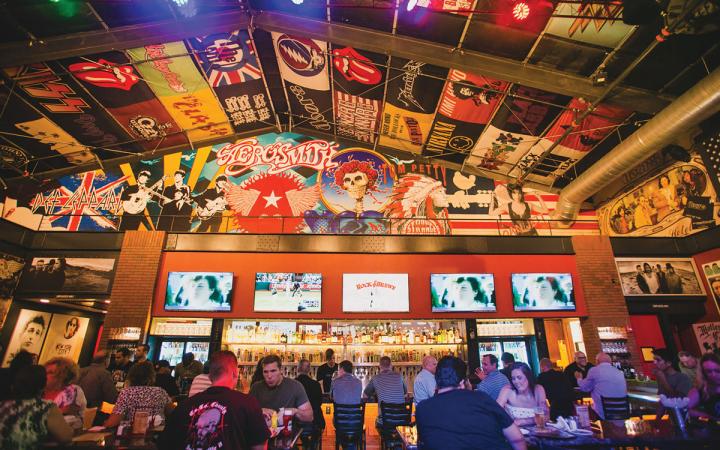 Make People Feel at Home
“If you walk into an eatery and the food is great but you’re treated like crap, you’ll never come back. If you walk in and the first impression is, ‘Gee, these people are really nice and make me feel at home,’ you might, but your taste buds are going to speak to you or they’re not. So it is a combination of the environment, the food, and the people. It’s really got to be an experience, and obviously we’ve hit the pleasure button, because we not only have folks that come in, but come in often and bring their friends, and they have birthdays and work lunches and work dinners there. We take great pride in the fact that people like coming to our places.”
12 of 17
Rock & Brews 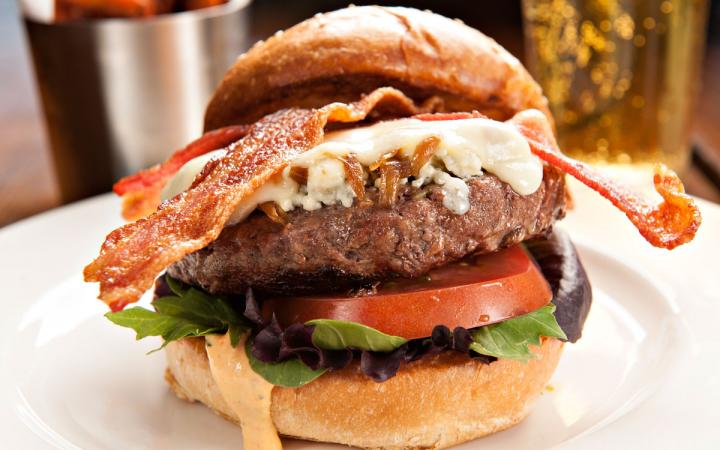 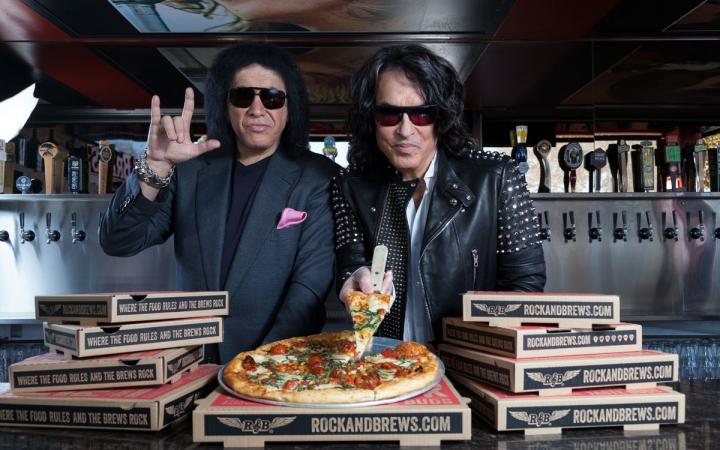 To Thine Own Self be True
“The best thing to do when you run a race is to just look forward and do the best you can. To thine own self be true. Don’t worry who is over your shoulder, don’t look behind yourself or to the left and right; just be the best you can be. There is plenty of room for everybody, and we wish everybody well. We’re not here to talk down anybody else. And we know Rock & Brews is not going to be the only eatery you go to, but we’re going to make you remember us.”
14 of 17
Rock & Brews 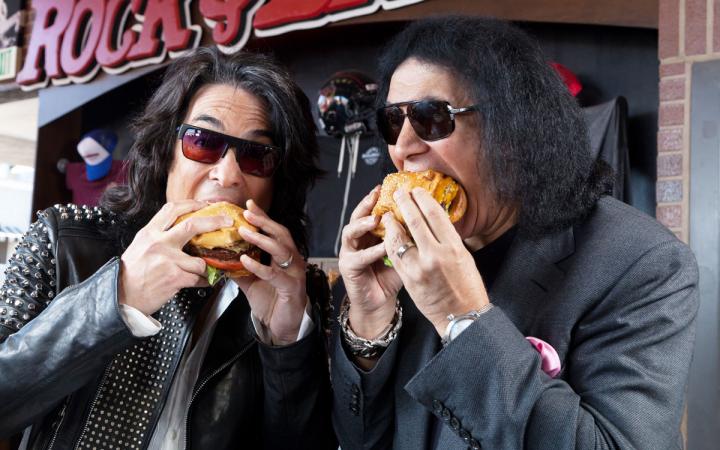 [On the brand's philanthropy and support for veterans]: “Politicians can raise billions of dollars for their own agenda, and yet if someone risks their lives and goes overseas and happens to survive in combat either wounded physically or mentally, they aren’t even guaranteed a job. Shame on us. There is no amendment to the constitution that says if you risk your life we will at least get a job. You won’t get a job or become rich and famous, but at least you’ll be able to feed for family. This is the least we could do.” 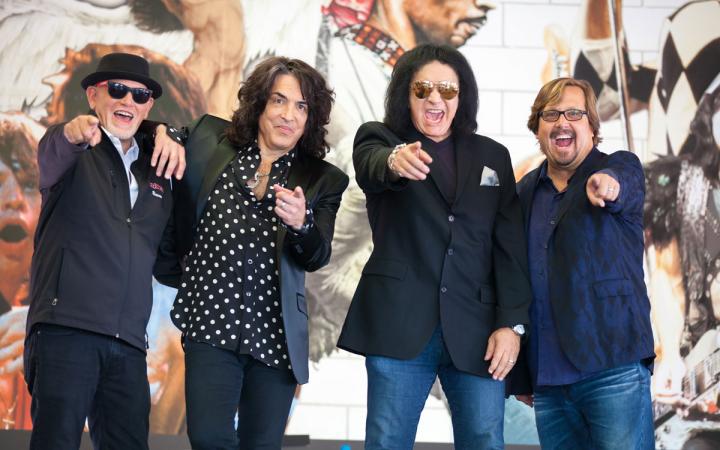 [On the future of Rock & Brews]: “It will be bigger and better, and most of the time we spend saying no. We get tugs on our shirtsleeves all the time saying, ‘Hey let’s open one in Anchorage Alaska,’ but hold on. Before we do that, let’s talk about it and find out a little bit about the land, and the culture, and who is there, and who is going to come in every day, as opposed to fast food joints, which open everywhere—that’s their brand, it’s not ours. We want to make sure that every single Rock & Brews is as good as it can be.” 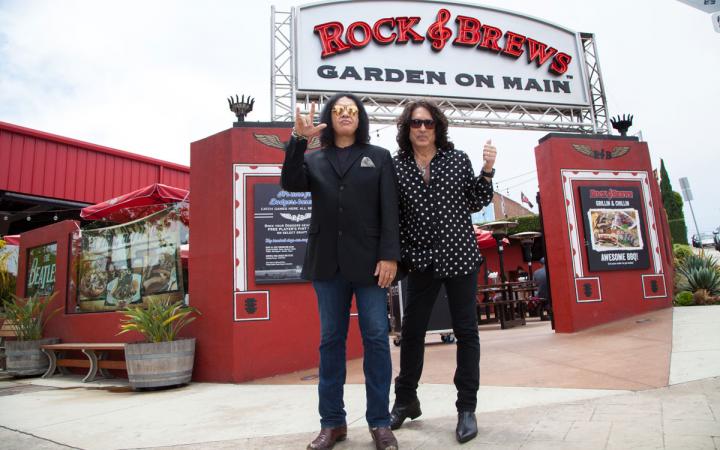 “Social media is your best friend and also worst enemy. If somebody has a bad experience anywhere they go then the world knows, so it is a incumbent upon us to make sure that everyone is happy when they come into one of our Rock & Brews. That means keeping a close eye on it, and that means having partners who send their kids to school in the same neighborhood as our restaurants and come into work and make sure everybody is happy.” 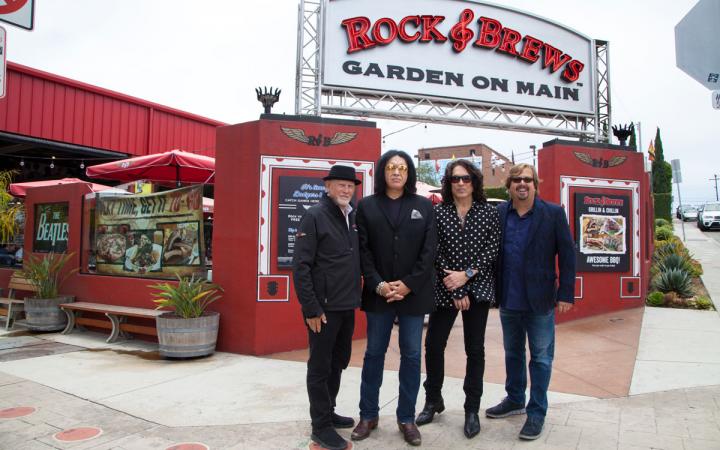 Listen to the People
“Work harder today than you did yesterday. When you ask a question, shut your pie hole and listen to the answer. You’re doing market research, and most often you have to pay for market research. You should consider the following: Steven Spielberg would never have someone tell him how to edit and write and direct, yet after he’s done, he goes to some place you’ve never heard of and asks the most unqualified people you’d know what they think. Listen to the people, and work harder than the guy who is standing next to you.”