The 7 Hottest Cities to Open a Restaurant 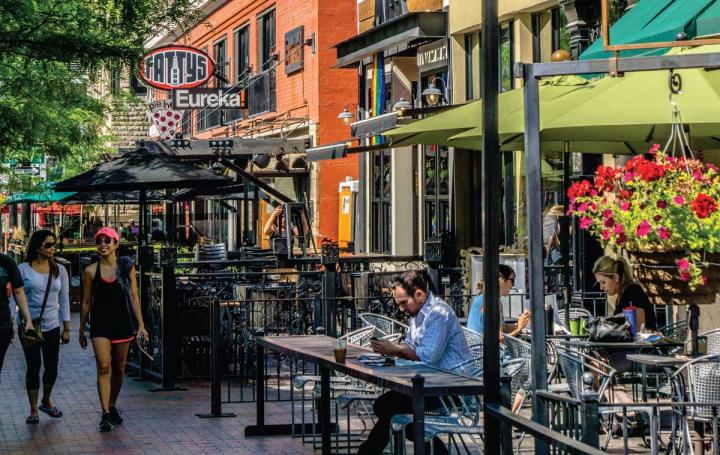 Known as: The City of Trees

Home of: The Blue Turf at Boise State University

With James Beard nominees moving in and funky concepts opening, Boise is quickly gaining notoriety as a hot market for restaurant owners.

In Idaho’s City of Trees, the economy is booming and residents and tourists spend their leisure time and discretionary income exploring the city’s growing culinary buffet. At least a dozen new restaurants have opened or been planned in 2018—including Madre from John Cuevas, a 2018 James Beard award semifinalist from San Juan Capistrano, California. Cuevas and his wife, Julie, are among a flock of former Pacific dwellers relocating to Boise. The population grew 3.08 percent in 2017 and is projected to grow another 2.34 percent in 2018. That 2017 number landed Boise at the top of Forbes magazine’s list of fastest-growing U.S. metro areas.

Boise is one of the most geographically isolated cities of its size, says Shea Anderson, a spokesman for the city. “There’s no big city just down the highway. So, as our mayor has often put it, if we want something special—from orchestras, libraries, or even world-class skate parks—we’ve had to build it ourselves,” he says.

As a result, residents are eager to see new restaurants come in. Many of them are working up their appetites daily, while enjoying a hallmark of Boise’s character—accessibility to outdoor recreation. Diners are likely to work up a sweat on any of the nearly 200 miles of hiking and biking trails that are located just off Boise’s walkable downtown. The community’s ski area, Bogus Basin Mountain Recreation Area, is just 16 miles away.

The city also has a growing craft beer and winery scene. A recent count showed about 19 breweries in Boise. And with four distinct seasons but almost 250 days of sun, Boiseans love patios. It’s a sweet spot for outdoor dining and chef-driven concepts. 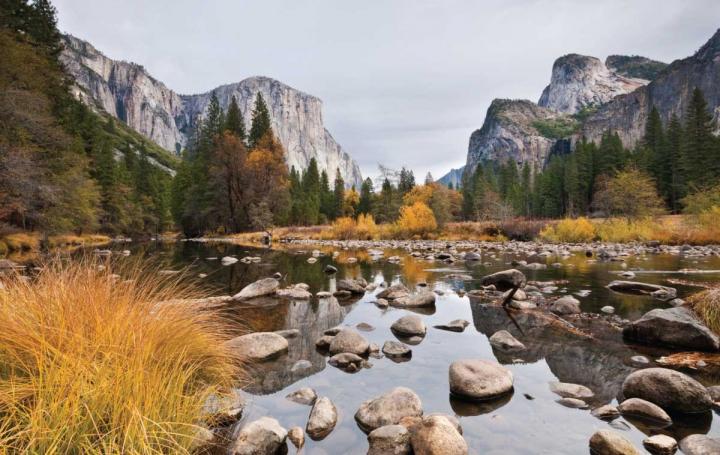 Known as: The People’s Republic of Boulder

Known for: Hiking and Start-Ups

A tiny tech metropolis surrounded by nature, Boulder is a growing destination for start-ups and their notoriously food-savvy employees—millennials and Gen Z. Boulder is known for being a college town with scenic beauty, outdoor recreation, and natural and organic foods.

It’s that burgeoning start-up activity and spirit of innovation and entrepreneurship that continue to drive growth surrounding a collaborative business environment. As far back as 2010, Boulder had six times as many high-tech start-ups per capita than the nation’s average, according to a 2013 study by the Kauffman Foundation. Not only are these folks hungry, but they’re also hungry for what’s trending on full-service restaurant tables today: healthy-ish, mostly plants, and sustainable ingredients.

In fact, Boulder is known for its farmers market, the largest in Colorado—it was estabilshed in 1986 and named the No. 1 Farmers Market in the U.S. by USA Today. In addition to 45,000 acres of open space surrounding Boulder, organic farms surround the community as well. Many Boulder restaurants, including Top Chef Hosea Rosenberg’s Blackbelly, have embraced the farm-to-table movement. It’s the place to be for local agriculture, sustainable sourcing, and a highly educated clientele. 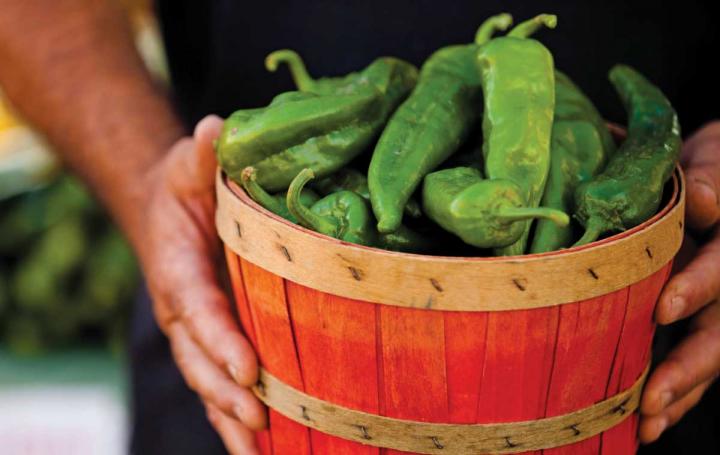 Known as: The City Different

Known for: World-class art and Spanish-influenced cuisine; the green and red chili

The food scene in Santa Fe is steeped in history and culture—three cultures came together to establish and grow the city after it began as a Spanish settlement in 1610. The cuisine is influenced by not only the Spanish, but also America’s natives and pioneers. It’s one of the oldest cities in the U.S. with one of the highest elevations—7,199 feet above sea level.

Visitors flock to Santa Fe for its scenic desert views, history, and world-class art scene. The city is home to 17 major museums and 250 art galleries. But after a long day gallery hopping, visitors spend their vacation dollars on food and beverage, second only to lodging in overall visitor spending. Santa Fe visitors spent $828 million in 2015, and $14 million of that was on food and beverage. The demand for unique culinary experiences from these 2 million annual visitors fuels the restaurant scene for growth.

The city of Santa Fe processed 29 applications for new food establishments in the last fiscal year. Tres Colores brings Santa Fe’s tradition of cultural amalgamation to the table with its cooked-to-order tacos. Owner Hugo Sena says his family’s own blood—African, Spanish, and indigenous—are behind the name, Tres Colores.

Meanwhile, Tumbleroot Brewery and Distillery showcases another trend: manufacturing. A local doughnut shop, Whoo’s Donuts, was once a small retail store and now sells to Whole Foods with an eye toward expansion into larger distribution. Whoo’s Donuts’ operation is supported by Santa Fe’s Job Training Incentive Program, which is funded by the State of New Mexico.

New restaurant owners may be eligible for the job training program or for the city’s Local Economic Development Act incentive if they locate in a historic building.

At its core, Santa Fe is a city of creativity and the arts, where visitors and locals alike seek unique cultural and dining experiences. 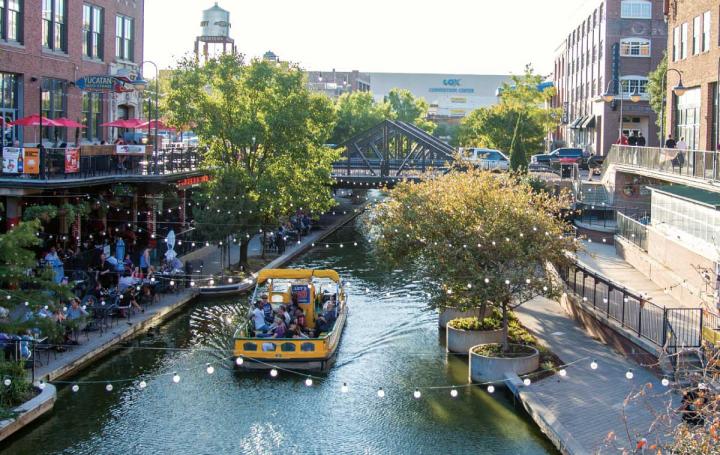 Known as: The Big Friendly

In a city known for chicken fried steak, a vegan can still find a doughnut. Oklahoma City may be known for the Oklahoma National Stockyard and its claim to the title of Horse Show Capital of the World, but underneath its seemingly all-American reputation is a burgeoning food scene with trendy bites like Sichuan soup dumplings and craft cocktails. And yes, there are trendy steakhouses, too.

Innovation has been at the heart of the OKC food scene since Great Depression-era days with the birth of the Onion Burger—a hamburger patty bolstered by chopped onions to make meat go further in otherwise austere times. The Mother Tucker at Tucker’s Onion Burger is one of the most famous bites in the city, while the Chicken Fried Steak at Cheever’s Cafe is a staple. While OKC-ers are loyal to their local institutions, their Big Friendly attitude carries to newcomers, as well.

Oklahomans have the Oklahoma Standard to live by, according to spokeswoman Tabbi Burwell. In times of tragedy, Oklahomans pull together as a community and are stronger and better because of it, she says. The Oklahoma City bombing is an example of how the city weathered a tragedy and became stronger. Over the years, many chefs have donated time for fundraisers that benefited community needs.

Data shows the city is growing and incomes are rising, too. The population grew 1.12 percent between 2015 and 2016 and the median household income rose from $50,739 to $52,915—a 4.29 percent increase. And with its highest paid, most specialized workers in mining and quarry, OKC’s big spenders are likely hungry for new, interesting, exciting ways to use that disposable income.

In short, Oklahoma City is a fast-growing dining destination in America’s heartland where the palate is expanding far beyond meat and potatoes. 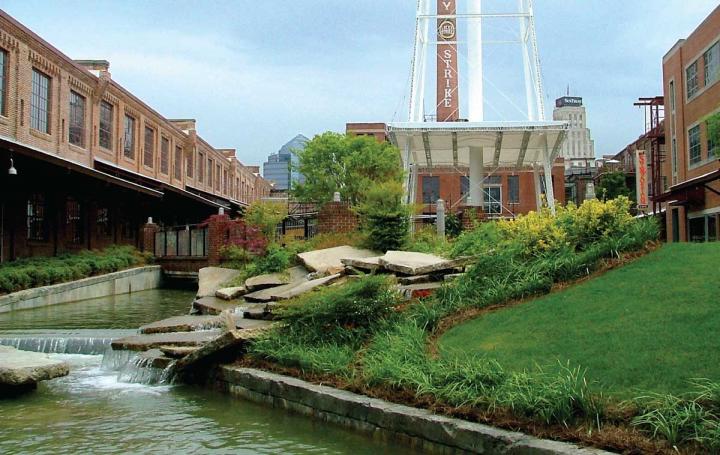 Known as: Officially, the City of Medicine; affectionately, Bull City

Durham, North Carolina, has its history in tobacco. But the town has transformed itself into a medical, tech, and start-up city. And along with that came a vibrant food scene that has gained national recognition by foodies and food magazines alike. Thirty-one new restaurants have already opened so far in 2018, says Aaron Cox, a Durham spokesman.

As evidenced by these new businesses, Durham prides itself on being a haven for these restaurateurs. The revitalization of Durham’s downtown core has created a slew of new, exciting spaces for restaurants. The spaces themselves, which range from old tobacco buildings to repurposed motels and banks, have inspired chefs and restaurant owners to take on new concepts. James Beard award–winning chef Andrea Reusing, for example, provides food for the Durham Hotel, a striking mid-century building that was formerly a bank. Durham’s restaurant scene has a long history of encouraging innovative cooking and experimental dishes, which allows restaurant entrepreneurs to try new ideas in an environment that looks for it.

The goods are not for locals alone, of course. More than 16 million people visit Durham annually, and there is always someplace new for them to try. What brings these millions of visitors each year? Durham is home to two D-1 schools: Duke University and North Carolina Central University. It is are also home to Research Triangle Park, American Tobacco Campus, Burt’s Bees headquarters, and the Durham Bulls baseball team. Many visitors, it would seem, then decide to stay. Durham’s population growth has been at a fast, steady rise. The 2017 population estimate is an increase of more than 4,500 over 2016 numbers. An average of 12.5 people move to the fast-growing, open-minded city of Durham each day. 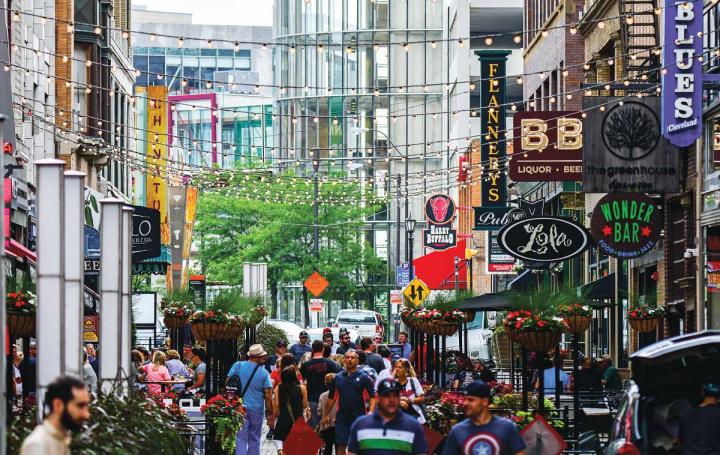 Known as: The CLE

Known for: The Rock & Roll Hall of Fame, LeBron James

Former Cleveland Cavalier turned actor turned restaurateur LeBron James isn’t the only famous foodie to come out of Cleveland. Michael Symon, a Food Network Iron Chef and host of ABC’s “The Chew,” has been lighting up the food scene. As the 16th-largest metro area in the U.S. and the 15th-largest consumer market, it’s not to be overlooked by growing restaurant chains and curious independents. More than 30 new restaurants have opened in downtown Cleveland since 2017.

The Greater Cleveland metro area hosts nearly 3 million residents—much more than the nearly 400,000 in the city of Cleveland alone. The surrounding county’s population is projected to decline by 65,000 people per year over the next five years, while the population within the city of Cleveland itself is projected to rise as areas like downtown experience millions of dollars in new residential developments and renovations. That leaves plenty of room for more new restaurants, too.

But what are restaurateurs in for? Clevelanders have a sophisticated and diverse culinary palate, with the ability and resources to appreciate everything from fine dining to Midwest classics. Many neighborhoods and destinations for new restaurants have an established footprint and built-in foot traffic, in places such as Gordon Square, Tremont, and Ohio City.

Chef-owned independent restaurants are leading the growth in burgeoning neighborhoods that highlight the unique creativity and diversity of cuisines in Cleveland. Popular Cleveland chefs such as Symon, Zack Bruell, and a gang of up-and-coming chefs have put Cleveland on the map as a culinary destination.

The city’s culinary profile as yet is heavily influenced by its large Eastern European population—think pierogies, corned beef, and those Polish doughnuts called paczki. 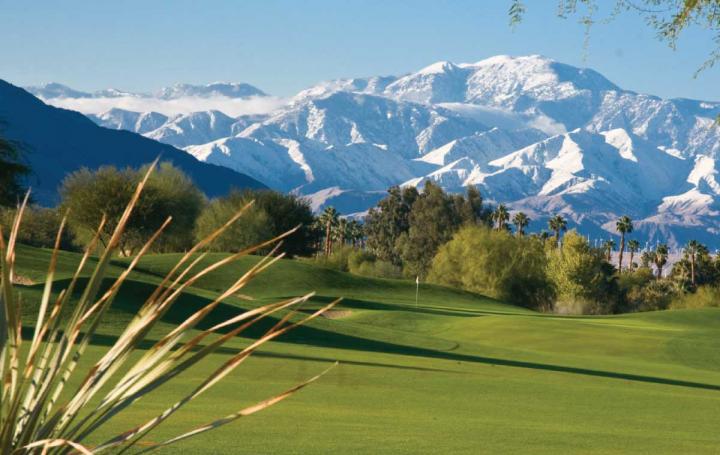 Home of: The Palm Springs Aerial Tramway, the largest rotating tramcar in the world

With the rise in popularity of mid-century design and decor, along with the seemingly lifetime American lust for palm trees and endless summer, it’s no surprise that Palm Springs, California, is a hot destination for more than just snowbirds.

The small desert city is known for sunshine, relaxation, outdoor activities, and—of course—all that style, modernism, and vintage Hollywood glam. Lesser known to the world outside Palm Springs is its Native American heritage.

The city’s food scene has a history of well-curated, chef-driven, and locally owned restaurants with unique design and unusual menus. Few chain restaurants make Palm Springs home, and those that do know they must tailor their offerings to the city’s vibe, such as the Tommy Bahamas Marlin Bar inside the retail store, described as a desert oasis. It's a laid-back outdoor space complete with umbrellas, mist on hot days, and heaters on cool evenings. After a day of retail therapy, it's the ideal spot to take in the vibrant energy of downtown Palm Springs.

As the restaurant business grows in Palm Springs, restaurateurs who choose to locate there are rewarded with the resort lifestyle as they work on projects they’re passionate about in a thriving community that is hungry for creative dishes and spaces. The community is friendly and many live (and play) there part-time. As a result, they appreciate a welcoming atmosphere with new treats to delight them while they’re there.