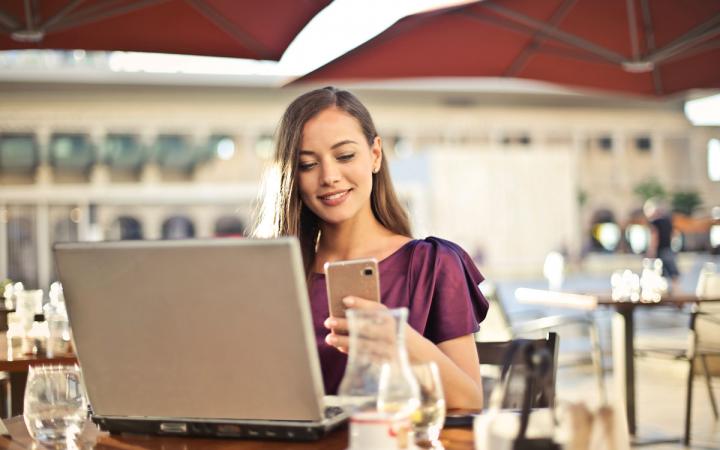 Social Drink & Food represents the latest entrant into this legacy, a spot that blends resort-style flair with the sights and sounds of urban living.

Launched last May, the rooftop space at Social Drink & Food, explains owner Gil Rubenstein, was designed by Kimberly Hall Creative and envisioned to transport guests to a more laid-back place, something akin to a beach in California or a secluded island bar in the Caribbean. Admittedly, that can be tough to find in Midtown Manhattan, where velvet ropes and $20 cocktails are the norm and the pace of life rarely slows.

In fact, Rubenstein says, “If it weren’t for the views of the entire Midtown skyline, guests would forget that they were in the center of New York City.”

At 7,000 square feet, Social Drink & Food boasts New York’s largest open hotel rooftop space. With a project of this size sure to capture attention, Rubenstein knew he needed to construct a distinctive rooftop terrace capable of standing out in the ultra-competitive Manhattan marketplace. The vast rooftop patio accomplishes that with a creative, though calculated, mix of beach chairs and beer pong, film screenings and globally inspired street fare.

“We wanted a place where someone coming from a long day at the office could feel equally at home as a hotel guest,” Rubenstein says, calling Social Drink & Food “a different kind of urban experience.” 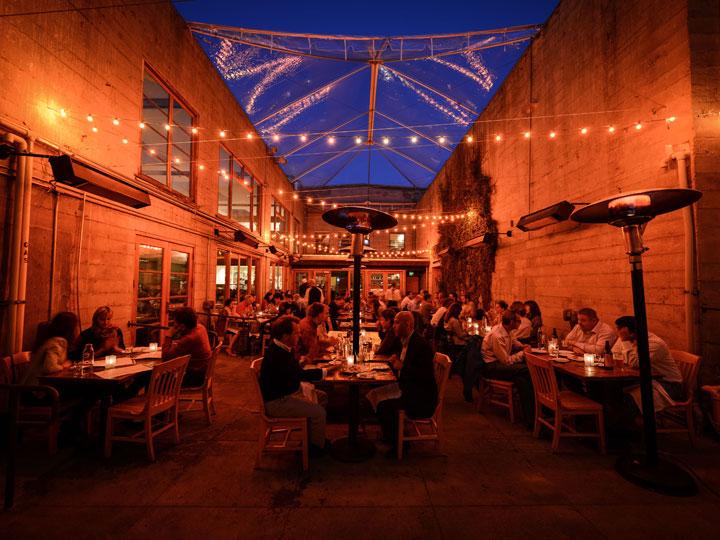 Perhaps no restaurant in the U.S., however, blends those elements together quite like San Francisco’s Foreign Cinema, where diners can enjoy nightly movies such as “Cabaret” or “Casablanca” on the courtyard’s white-painted brick wall alongside Mediterranean and Californian fare crafted by Chef Gayle Pirie.

Pirie, who took over the then 2-year-old restaurant in 2001 with partner John Clark, says the courtyard is central to Foreign Cinema’s spirited atmosphere—a space natural and elegant, open yet intimate.

“The feel of the courtyard was to create an environment of community and conviviality, a shared space to celebrate the moving pictures on the wall at dusk and to create a piazzalike feel to enjoy the microclimate the Mission District offers,” Chef Pirie says.

To accommodate San Francisco’s oft-finicky weather, an overhead tent encapsulates Foreign Cinema’s courtyard. Pirie says the large, ambitious covering takes a beating in storms and must be replaced every two years. It also becomes difficult to heat in cold weather, which the restaurant addresses by offering auxiliary spaces to sit or by minimizing tables and placing seats closer to the building.

“But the film always shows, so there is that central focus even when seating is reduced outside,” Pirie says.

Those operational hurdles and expenses aside, Pirie wouldn’t have it any other way in her effort to supply a “rare experience in San Francisco and even the world.”

“[The courtyard] is a unique and magical space that creates a seductive landscape and transports the guests away and out of their normal dining-room experiences … [to] a lively and enriched setting that feels intimate,” Pirie says. 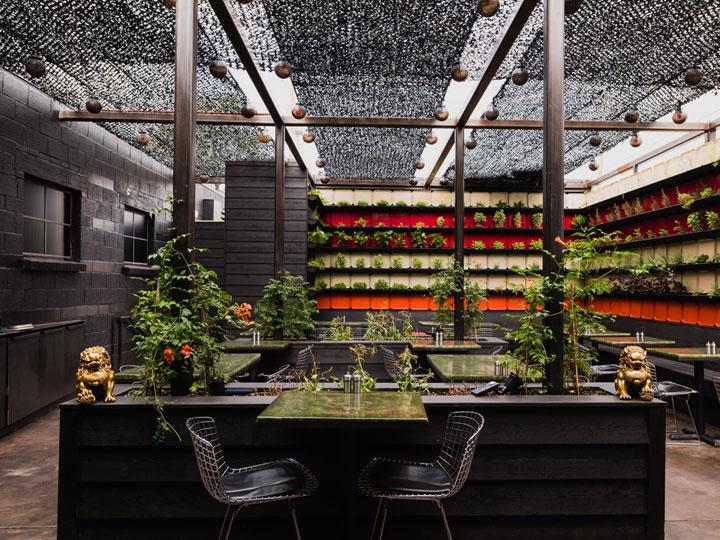 DENVER | In the beginning, Chef Justin Cucci clutched but a single inspirational idea for Vital Root’s back patio setting: He envisioned a tree house.

“I wanted something that was protected and fun,” says Cucci, whose restaurant is located in a former nut factory.

Everything else would come in time, confirms Cucci, who favors the design-build approach and the strategy of developing ideas along the way rather than crafting advance plans. When he went to the city to show his plans, for instance, he only showed where the walls would be.

The organic design process produced a striking patio that rejects the sense of sameness Cucci sees dominating new restaurant design. “It was a conscious decision to go against the grain, a rage against the machine type of thing,” he says.

The patio’s theatrical design includes stark black walls and benches, a startling counter to Vital Root’s whitewashed dining room. On two of the four walls, hundreds of vintage red, orange, and cream lunch trays serve as the backdrop for a zig-zagging live herb garden that covers a half-mile. The herbs are planted in roof gutters, a salute to Cucci’s penchant for using materials in creative and unexpected ways.

For the tables, Cucci poured epoxy over a vibrant artificial grass teeming with plastic ants and caterpillars.

“Each table has its own vignette, which is a real talking point for our diners,” Cucci says.

For seating, the restaurant’s chairs are 1960s-era concoctions from Harry Bertoia, an Italian-born furniture designer known for his rousing mid-century modern design.

Overhead, meanwhile, Cucci purchased camouflage netting akin to the fabric military outfits use to cover their tanks. He double- and triple-wrapped the fabric to provide shade, but also to create silhouettes of the sun. 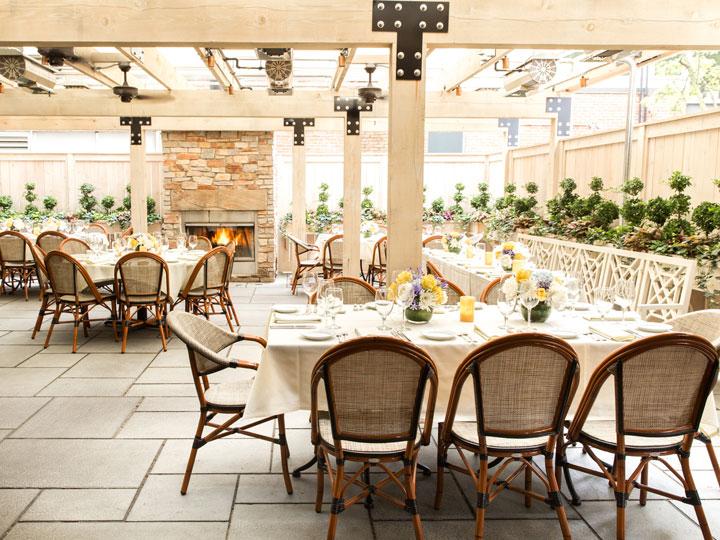 CAMBRIDGE, MASSACHUSSETS | For more than three decades, the outdoor patio at the Harvest Restaurant, an upscale American eatery tucked in the shadows of Harvard University, was more sidebar than showpiece. A few planters separated Harvest’s patio from the street and its neighboring buildings—enough to provide guests an opportunity to dine al fresco in a classic Harvard red-brick-paved hideaway with linden trees, but little else.

That began to change in 2008 when the Himmel Hospitality Group, which acquired Harvest in 1998, renovated the patio to create a refuge from the Harvard Square commotion. Ownership integrated a stone fireplace, lattice work, updated planters, and gas heat floor lamps, effectively creating a patio much more conducive to dining al fresco for numerous months throughout the year.

Then, in 2015, Himmel leadership ordered another major patio renovation, adding folding glass walls on two interior walls to create a seamless flow of inside to outside. The renovation also included slate flooring, additional greenery, and updated seating.

The most daring addition, however, was a custom overhead structure—designed in Germany and installed for the first time in the U.S. at Harvest—to provide protection from the elements, while maintaining the outdoor feel. The structure includes retractable awnings and overhead heaters that can bring the temperature up to 70 degrees in still-nippy months like March or November. The crew installed the custom structure around one soaring linden tree, a natural centerpiece that enhances the patio’s cozy feel.

Today, Harvest’s 50-seat patio is widely considered one of Boston’s most romantic outdoor dining venues. “In the end, the new patio at Harvest means our guests most enjoy the privacy, a serene environment, and a unique oasis in the middle of Harvard Square,” Himmel says. 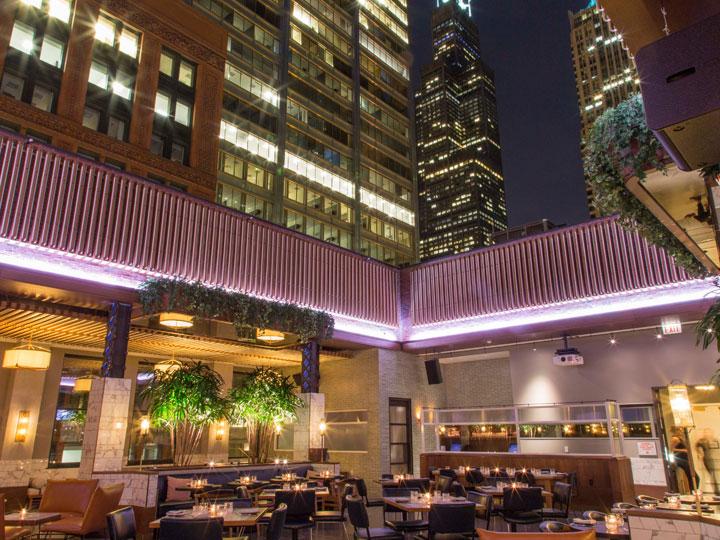 CHICAGO | Amid another harsh Chicago winter, it can be difficult for residents and visitors to the Windy City to feel a beachy vibe.

Located 15 stories high within the newly opened Kimpton Gray Hotel, the South American–inspired Boleo delivers a laid-back, tropical setting right in Chicago’s Loop. One in which diners can enjoy traditional and contemporary interpretations of authentic Peruvian and Argentinean street fare like ceviches, tiraditos, anticuchos, and empanadas.

During the winter, Boleo guests sit inside a snow globe as 360-degree windows and a retractable glass roof offer guests protection from frigid temperatures, but also stunning vistas of Chicago’s ravishing skyline. In warmer months, of course, the roof disappears in favor of fresh air and even clearer views of the city’s architectural splendor.

“Guests appreciate having a multi-season dining venue where they can take advantage of both the daylight and the moonlight,” says Andrew Cohen, owner of the Parts and Labor Design firm that crafted Boleo, which opened last August.

By installing vertical and horizontal trellises over brick, Parts and Labor Design gave the high-up space a true courtyard vibe, an outdoorsy feeling many nature-starved Chicagoans relish as the city’s greenery turns brown or becomes blanketed by snow.

Cohen’s favorite design element, however, remains the repurposed steel columns that the Parts and Labor team decorated with marble-clad tile halfway up. The columns are original to the historic New York Life Building, a once-endangered, 114-year-old structure designed by architect and engineer William Le Baron Jenney, a man considered the father of the skyscraper. 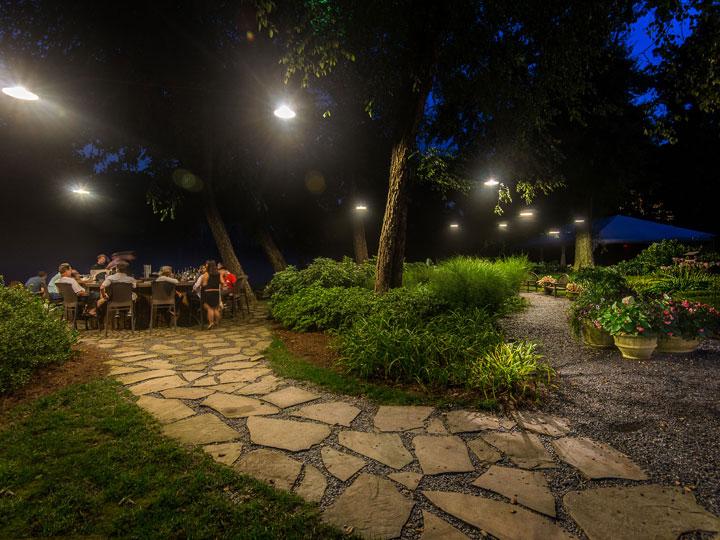 ATLANTA | Located 10 miles north of downtown Atlanta along the banks of the Chattahoochee River, the colorful gardens and meandering walkways that define Canoe’s outdoor dining area provide a pastoral escape from the clutter and industrial feeling so entrenched in the urban living narrative.

And that’s precisely the point, according to Canoe general manager Vincent Palermo, who considers Canoe’s outdoor-dining space, with its waterway views and lively foliage, more like a home garden than a commercial venue.

“[Our outdoor dining] provides a reprieve from the hustle and bustle of Atlanta,” Palermo enthuses.

Inheriting the raw riverside space back in 1995, Canoe leadership embraced the opportunity to craft an outdoor-dining venue unlike anything else in Atlanta. They envisioned an environment that transcended traditional al fresco dining, particularly those carrying big-city addresses, and drew inspiration from the Robinson Tropical Gardens, a dance and drinking venue from the mid-20th century that previously called Canoe’s property home.

Heralded as one of Atlanta’s most romantic and cozy dinner spots, Canoe guests can today dine overlooking the tranquil river or take a glass of wine in hand and walk the property’s gardens, which include a quartet of 4-by-16-foot raised vegetable beds and even live chickens. The award-winning, 21-year-old restaurant also hosts a River Bar near the bank of the river that serves food and cocktails for guests’ enjoyment.

“Guests come here for a delicious meal and to enjoy the nature of the river and the gardens. They can sit out on the patio, riverside, or just walk around enjoying the nature,” Palermo says.