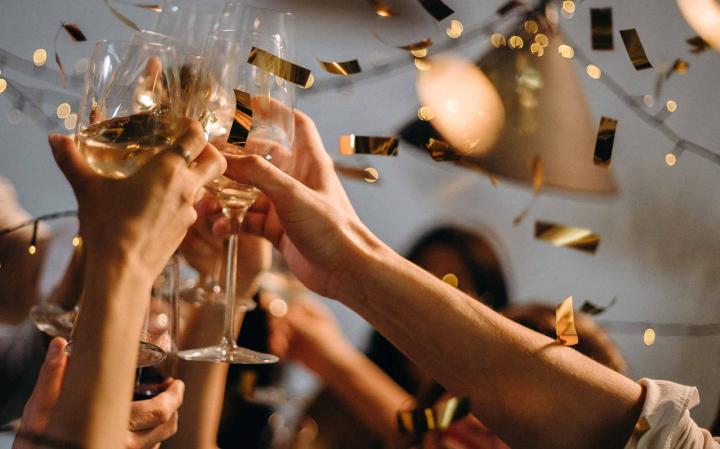 As the New Year arrives, restaurants embrace new realities. The turning of the calendar is a seemingly fitting time to embark on adventures designed to propel a business’s present life and its future prospects: new personnel, new menus, new ways to engage diners, and more.

As the consumer landscape evolves, savvy restaurateurs across the U.S. understand that simply maintaining the status quo represents a risky proposition, which is why many concepts enter 2020 with fresh initiatives designed to energize diners, strengthen marketplace standing, and drive results.

Whether opening that second location or overhauling the menu, these 11 restaurants are starting 2020 with bold moves. 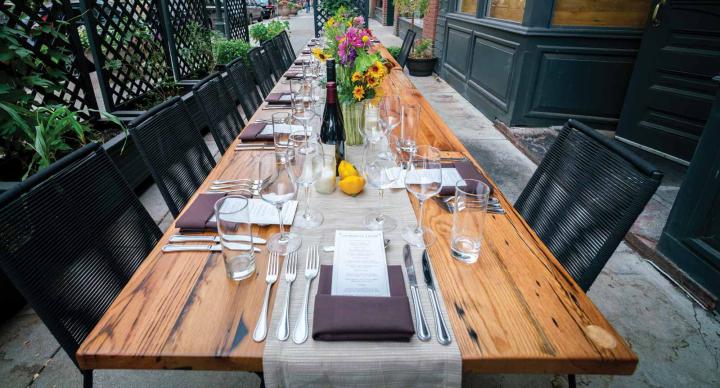 Urban Farmer, a two-year-old contemporary chophouse located in Denver’s Oxford Hotel, enters 2020 with bold plans for special events at its new outdoor patio, including distinctive initiatives like a chef’s tasting menu and other exclusive dinners. To deliver a more compelling, interactive experience, the chefs themselves will serve their off-the-cuff creations to diners.

Executive chef Chris Starkus says the heightened focus on these chef-driven special events—tickets to which will be sold through restaurant ticketing platform Tock—is designed to drive private-dining revenue, while also offering enhanced, esoteric experiences in a cozy, exclusive environment.

“My hope is to provide both new and returning guests a different and intimate chef-driven, seasonal dining experience,” Starkus says of the programming. 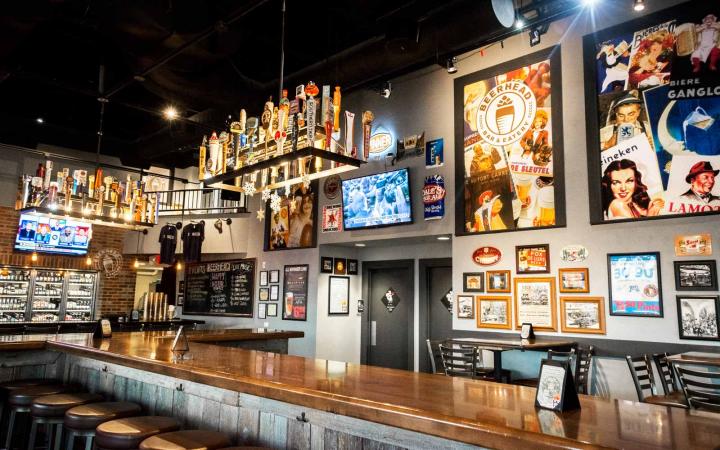 Beer as a loyalty reward

Inspired by a development pipeline of some 20 units, Beerhead Bar & Eatery began investigating programmatic and infrastructure improvements that could expose more guests to the fast-rising Beerhead brand. Among that exploration’s noteworthy results: the launch of the Beerhead 365 Rewards program that cofounder Greg Goodrich describes as “a top-tier rewards program for our budding top-tier restaurant franchise.”

While Beerhead 365 functions much like other ubiquitous restaurant loyalty programs by offering rewards points for every dollar spent as well as access to food-and-drink enticements and special events, its signature characteristic is the 365 Beer-of-the-Day component in which members can purchase the day’s designated craft beer for $3.65. With the spotlighted brews rotating daily, Beer-of-the-Day allows guests to try different options and economically expand their beer-tasting horizons.

“Our Beer-of-the-Day is truly a special feature of our rewards program that we think our guests are going to love and talk about throughout the year,” Goodrich says. 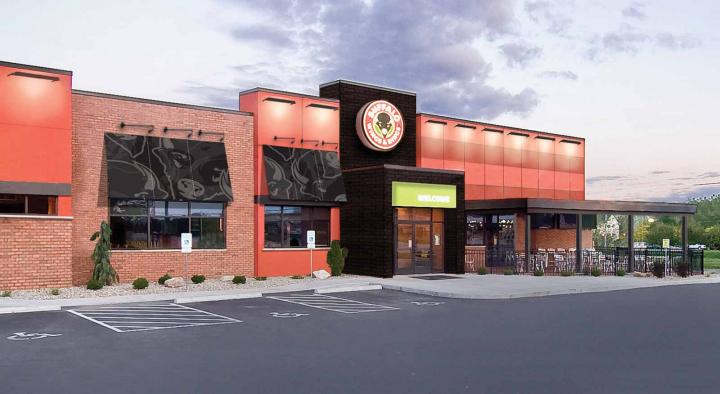 This summer, Buffalo Wings & Rings will debut its next-generation prototype restaurant approximately one mile away from its Cincinnati headquarters.

The updates are designed to increase unit profitability, especially on a sales-per-square-foot basis, and to energize both existing and prospective franchisees. The corporate-owned pilot location will feature a signature look with a tower on the exterior, al fresco seating, and a designated to-go and pick-up area for accommodating off-premises sales. Meanwhile, the interior will include zoned seating, a U-shaped bar, a party room, and a keg wall. This new design also cuts about 1,200 square feet from the chain’s typical restaurant kitchen to further reduce costs.

Leaders of the 82-unit chain began working on the next-gen prototype in early 2018. That process included extensive research on consumers and competitors, focus groups, ideation, and value engineering to arrive at a prototype that both honored the brand’s 35-year-old heritage and the investment of its franchise partners.

“We have spent a lot of time to further engineer the model to take as much cost out as possible while maintaining and elevating the overall brand experience,” says Buffalo Wings & Rings CEO Nader Masadeh. “This is our future … [and it’s] going to help us reposition the brand as we aim to further differentiate ourselves and drive stronger profitability for franchisees.” 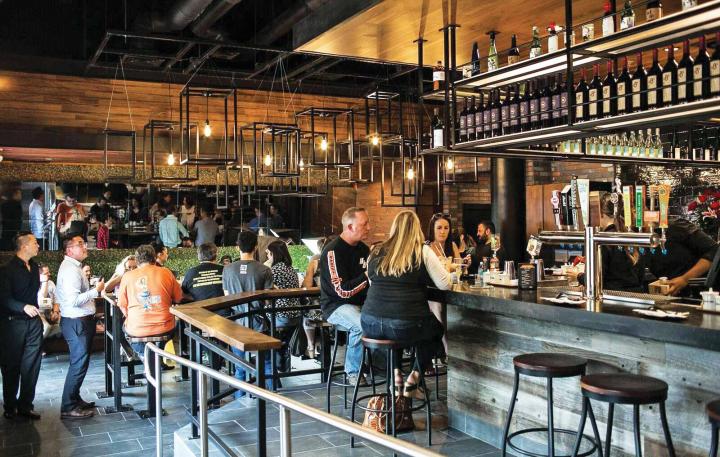 While Jinya Ramen Bar introduced its first vegan ramen options in 2015, including the chain’s popular Spicy Creamy Vegan Ramen, the Los Angeles–based operation is doubling down on plant-based options in 2020. Today, more than three dozen Jinya locations across the U.S. boast one full menu page devoted to dishes featuring Beyond Meat and three additional forms of tofu and alternative proteins.

“Our goal with the new plant-based menu is to offer a variety of plant-based options that appeal to vegans and carnivores alike,” Takahashi says, adding that dishes such as the Flying Vegan Harvest Ramen, Vegan Tacos, and Brussels Sprout Tempura offer a new perspective on plant-based dining. 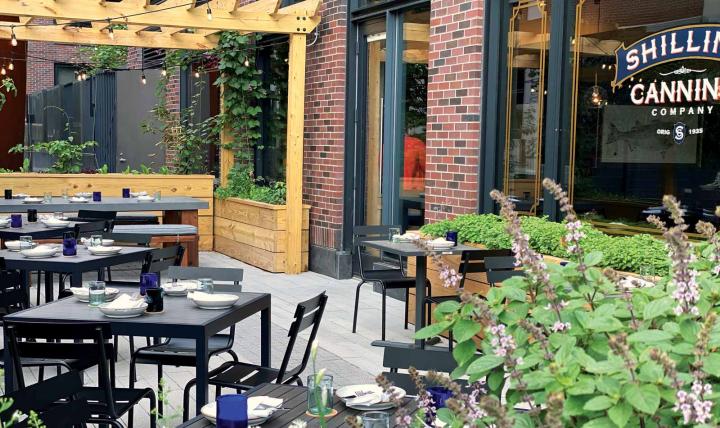 As the weather heats up in the coming months, guests of the Shilling Canning Company in Washington, D.C., will be able to enjoy the first full season of the restaurant’s new outdoor culinary garden—one that is pet friendly and capable of accommodating live music. Framed by string lights, a lush trellis, and planter boxes sprouting vegetables, herbs, and garnishes used in the restaurant’s dishes and cocktails, the al fresco setting features 27 seats, including an eight-seat communal table.

When the outdoor patio first made its appearance last October, the restaurant had to satisfy some logistical demands, such as gathering furniture, passing city inspections, and amending the restaurant’s liquor license. Shilling Canning Company owner and chef Reid Shilling touts the new fresh-air space as a snug spot for guests to enjoy libations and the restaurant’s Chesapeake-inspired menu.

“The outdoor culinary garden is beautiful and provides an oasis in our [Navy Yard] neighborhood,” Shilling says. “It’s another way for us to provide hospitality to our guests.” 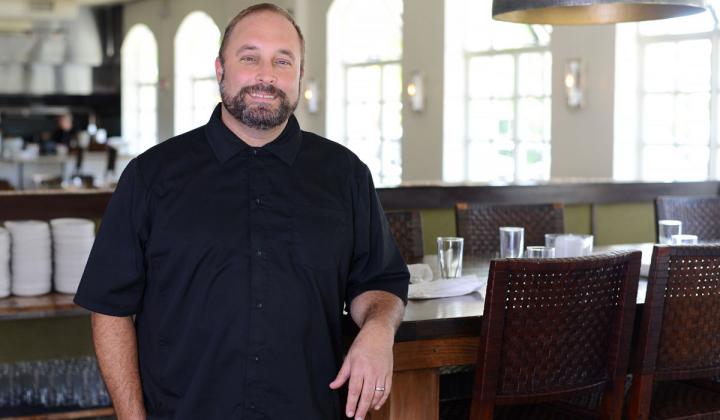 In mid-2019, the Ember Group, the Palm Beach, Florida–based restaurant chain behind notable local concepts Buccan, Imoto, and Grato, hired award-winning chef Zach Bell as the company’s first culinary director. As Ember grows its enterprise, including the upcoming opening of its first Miami restaurant, cofounder Clay Conley says the company needed a capable pro who could focus on chef development and scalability.

And Bell, a four-time James Beard Award finalist for Best Chef: South, was the easy choice.

“His talent is undeniable, and he brings exceptional organizational and team-building skills to the table,” Conley says of Bell, who worked in New York alongside celebrated chef Daniel Boulud.

As culinary director, Bell provides support and guidance for each chef de cuisine, mindful of balancing their independence with the restaurant group’s standards. He also oversees creative menu writing, recipe development, food and labor controls, health code compliance, and facilities maintenance. He is particularly eager, however, to formalize Ember’s Sous Chef Boot Camp, an intense training program that dives into the depths of what it takes to become a chef.

“The mission is simple: Make seriously good food, treat your guests and coworkers like family, and have fun doing it,” Bell says of his new role at Ember. 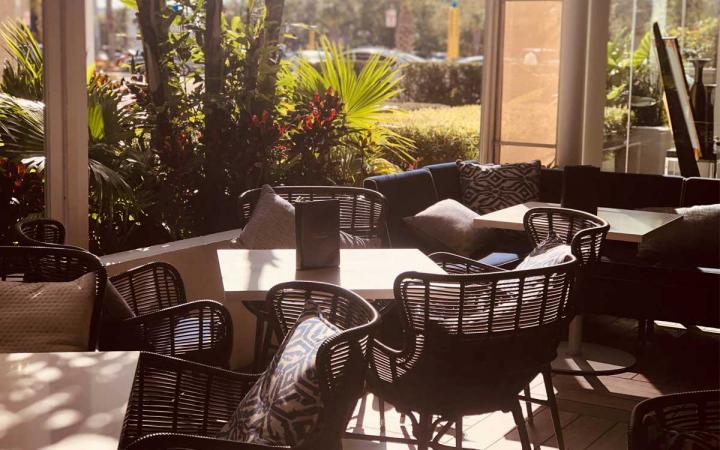 “I believe it will achieve what a captain’s list [curated collection] of wine does for the wine lover,” Hoover says of the reserve cocktail list, which will debut in March. 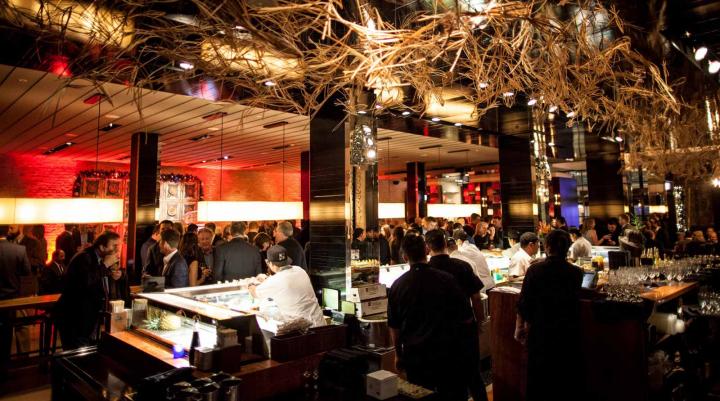 Four team members at Sunda New Asian in Chicago were recently certified as sake sommeliers through the Sake Education Council—a welcome arrival at the pan-Asian restaurant where sake now accounts for approximately half of the operation’s wine sales.

“With this effort, we hope to one day be the go-to restaurant for all beginners, as well as sake experts,” says Sunda senior operations manager Nina Dyrek. She adds that the sake sommeliers have already helped Sunda expand and curate its beverage menu to feature smaller Japanese breweries and seasonal sakes. 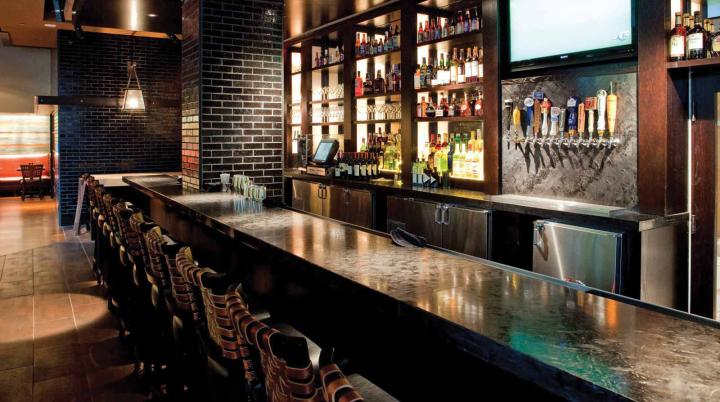 For the past decade, Post 390 in Boston fashioned itself a farm-to-table-style restaurant utilizing locally sourced ingredients from New England’s finest farmers, fishermen, and producers.

With the evolution of guests’ dining preferences, however, Himmel Hospitality Group leaders recently respositioned their heralded Back Bay eatery as an authentic American steak-and-seafood grill.

“The successful life of any restaurant is quite often dictated by its ability to maintain the qualities that made it successful in the first place while constantly growing and evolving based upon guest expectations and preferences,” says Himmel Hospitality Group president Chris Himmel of Post 390’s proactive move.

“Without this growth in identity and the changes that typically result, it makes it incredibly difficult to stimulate overall growth in the business,” he adds 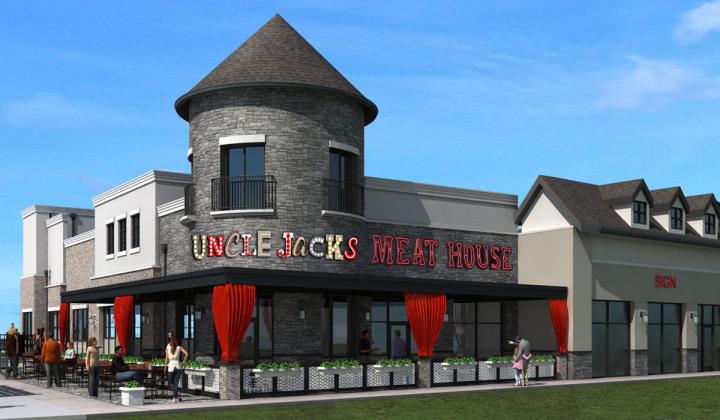 Looking to capitalize on the smashing success of its three-year-old unit in Duluth, Georgia, Uncle Jack’s Meat House founder Willie Degel and his team are preparing to launch a second unit in metro Atlanta this spring.

With a 4,000-square-foot dining room, two distinct patio spaces, and a bar lounge, Uncle Jack’s Peachtree location will be able to serve upward of 225 guests its bar-and-grill-style menu highlighted by American wagyu and Kobe cuts.

Eager to grow the Uncle Jack’s name well beyond its New York roots, the second Atlanta unit represents the Big Apple–based group’s continued push into the Southeast. In fact, Degel hopes to open as many as five more Uncle Jack’s units in and around Georgia over the coming years. 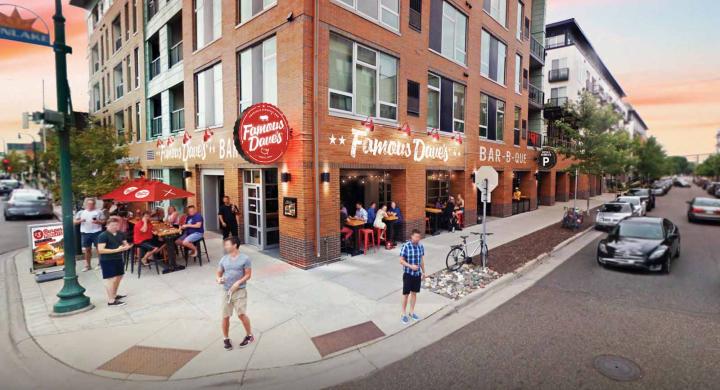 With half of its restaurant sales shifting to off-premises, Famous Dave’s leadership has emphasized technology and convenience, something that will dramatically come to life later this year when the 136-unit chain opens its first drive-thru unit in metro Atlanta.

“We’re just looking for the fastest, most efficient, and most effective way to get our food to consumers,” says Al Hank, the brand’s senior director of strategy and franchise operations.

Referring to drive-thru units as the future of the franchise, Hank says Famous Dave’s is leveraging insights from an earlier company experiment with drive-thru units in Minnesota, as well as its experienced collection of some 20 franchisees—many of whom operate other restaurant concepts—to inform the drive-thru effort. Its ultimate purpose? To entice repeat business.

“We want to provide the same great food and drink that our guests have come to enjoy for many years but do so at their convenience,” Hank says, adding that Famous Dave’s also recently partnered with celebrated pitmaster Travis Clark to open the first Clark Crew BBQ restaurant in Oklahoma City. That concept’s flagship 8,000-square-foot unit includes its own separate smokehouse and a large patio area to offer consumers an elevated barbecue experience.