Pizza, pasta, and panini were inexpensive ways to build a hearty meal while incorporating both traditional ingredients and new ingredients that were readily available in cities like New York and Boston.

Why Italian is the World’s Favorite Food

In less than a century, the cuisine has gone from relative obscurity to global sensation—here’s how.
March 2019 Nicole Duncan

Even if you regularly write about—and cook, eat, drink—Italian fare, it’s easy to take for granted just how beloved the cuisine is. Not only do those of us with Italian heritage dote on family recipes, but so too do most Americans and as it turns out, the rest of the world. In a global survey by market research firm YouGov, Italian scored the highest in terms of the percentage of people who had tried and liked the cuisine. The study polled participants across 24 countries regarding 34 cuisines ranging from Australian and Swedish to Singaporean and Moroccan. It was the most popular cuisine for Australians, Emiratis, Germans, Danes, and, not surprisingly, the Italians. In the U.S., Italian was the second favorite, just behind American food.

It’s a starkly different landscape from just less than a century ago. Before World War II, only a few major cities around the world had any Italian restaurants at all, according to food journalist John Mariani in his book, How Italian Food Conquered the World.

So how did a petite country that never boasted an empire like Spain, Britain, China, or Russia manage to woo the world with its incomparable flavors and dishes? The answer is, as you may expect, as nuanced as the cuisine itself.

The motto, E. pluribus unum, is alive and well in Italian-American cuisine. While the U.S. dwarfs Italy in geographic scale, the latter is more complex in its regionalism. In fact, Italy was not united as a nation until 1861, it would take another 85 years for it to change from a kingdom to a republic. Accordingly, dialect, customs, and yes, food, vary greatly by region. Hearty risotto (in variations like ai funghi, alla Milanese, allo zafferano) to the north varies greatly from tiella (mussels baked with potato, onion, and rice) near the Adriatic and scafata (a sautéed medley of fava beans, bitter greens, and asparagus) in the Piedmont. Such regional favorites may be on the upswing now, but the sheer number of southern Italian immigrants before and after World War II led foods like pizza and pasta to dominate the category stateside.

Many a chef—or nonna for that matter—would argue that even a dish as seemingly straightforward as spaghetti with marinara sauce is a labor-intensive feat. It’s true that hand-pressing pasta, peeling fresh tomatoes, and harvesting fresh can be somewhat involved, but the time commitment paled in comparison to the process in Italy. By and large, women spent most of their days (and household income) on food and cooking in Italy in the late 19th and early 20th centuries. By comparison, life in the U.S. required less time and money to put food on the table. By Mariani’s estimation, the extra time and discretionary funds paved the way to families striving to make the very best version of signature dishes, and, eventually, opening restaurants to serve the immigrant community and later the masses. Ironically enough, Mariani reports that the majority of these early restaurateurs had never stepped foot into ristoranti or trattorie back in Italy—save for maybe a pizzeria.

By tweaking the food to fit just about every occasion, Italian restaurateurs have built something that appeals to the masses.

Certainly the evolution from obscurity to ubiquity was made possible by the forces of globalization, but the simplification—or as some may say, bastardization—of Italian cuisine also played an important role. (To wit, a Florentine professor once asked me, “Who is Alfredo?’ in reference to the decidedly American penne alfredo.) Basic carriers like pizza, pasta, and panini were inexpensive ways to build a hearty meal while incorporating both traditional ingredients and new ingredients that were readily available in cities like New York and Boston. At the same time, these foods’ peasant roots imbue it with a certain comfort that curries near universal appeal.

While it may be Americanized Italian food that launched the category into global prominence, it was the far-reaching dispersal of Italian migrants and their descendants that championed the cuisine in their new homeland. Beyond movement within Europe, Italians moved in droves to Argentina, Brazil, Canada, and Australia.

As in the U.S., flavors and recipes from the so-called Old Country left an indelible mark on these places and have become national staples much the same way pizza is nearly as American as apple pie. Down Under, the pithily named Spag Bol (née spaghetti Bolognese) is fortified with native ingredients like grass-fed beef and mushrooms—there’s even a rumor of a vegemite version. In Argentina, the default ice cream (helado) is basically gelato but with the dulce de leche flavor winning more stomach’s than Italian favorites like pistachio and stracciatella. 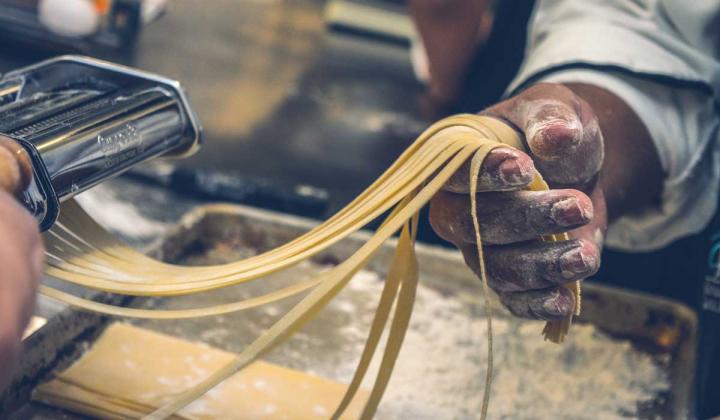 In a global survey by market research firm YouGov, Italian scored the highest in terms of the percentage of people who had tried and liked the cuisine.

If a combination of migration, economics, and taste turned Italian fare into an international sensation, its versatility and adaptability have kept it at the top. Few cuisines are as evenly distributed across the spectrum of formats and formality; Italian food can be purchased for less than $10 in a no-frills environment or elevated to a multi-course, fine dining experience that easily hits the triple digits. By tweaking the food to fit just about every occasion, Italian restaurateurs have built something that appeals to the masses. That’s not to say the feat is impossible with Chinese and French cuisine (the No. 2 and 5 most popular, per YouGov), but it has yet to be done.

Consumer tastes will continue to evolve, but so far Italian food has managed to stay in step with those changes. In recent decades, its reputation has grown to encompass healthy options rather than just indulgences like meatball calzones and cheese-smothered manicotti. The Mediterranean Diet, which pulls from Italy and other seaside nations, is held as one of the best blueprints for a healthy lifestyle.

As foodie culture continues to rise, Italian cuisine stands to shine brighter than it has to date. Regional obscurities like supplì (fried rice balls from Rome) and ravioli all’ arancia (a citrusy take on the pasta dish) could soon pop up on more menus as guests demand more than chicken cacciatore and bruschetta.

It took the simplest iteration of Italian cooking to win stomachs worldwide, but it will be the diversity that keeps us all enchanted.