Grimaldi’s Pizzeria
Grimaldi’s has grown to 43 company-run stores in the U.S. Next up? Franchising.

As far as failures go, Grimaldi’s wouldn’t mind repeating this one. When Eric Greenwald, the iconic pizza chain’s chief operating officer, helped launched the brand in Arizona 16 years ago, they strategically choose three spots to test the waters. While Grimaldi’s had no shortage of brand affinity in its legacy New York City market—Food Network named it one of the five best pizzerias in the country—could it work 2,000-plus miles away? What kind of demographic would fit? Did it need to be an affluent area? A tourist-driven one? What did the ideal real estate look like?

Greenwald admits he and CEO Joseph Ciolli, the son of Frank Ciolli, who bought the name and company from Patsy Grimaldi in 1994, just weren’t sure. So they decided on three very different pilots: Old Town, Chandler, and DC Ranch. The first, which the duo ran day-to-day without any managers for two years before expanding, had no shortage of tourists thanks to baseball spring training. Chandler was a fresher development with a lot of young families. And DC Ranch skewed higher-end.

“We wanted to see where we’d be successful,” Greenwald says. “Luckily, knock on wood, it was a failed test in the sense that we were successful in all three locations. And we have been since. They’re all still open.”

While it took two years to debut the second Arizona spot, Grimaldi’s has made up for lost time since. And the legendary brand is about to kick that growth into another gear.

New York City (in Brooklyn), Missouri, Colorado, Nevada, California, Kansas, Wisconsin, and South Carolina all have just one unit. Texas has 16 and Arizona 13 to anchor the footprint. 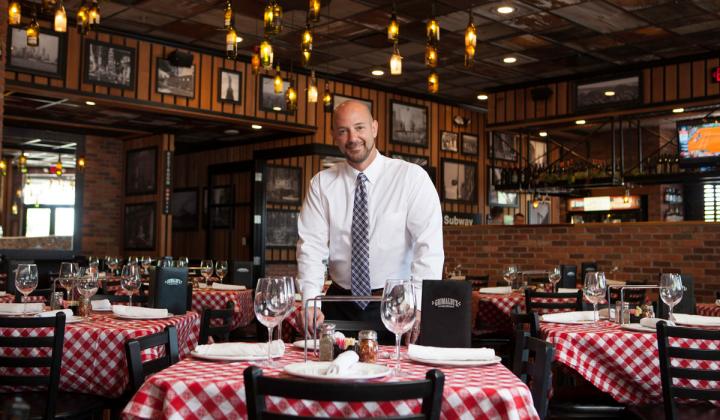 Earlier this month, the company announced its first domestic franchise program. Grimaldi’s engaged advisory firm MSA Worldwide to optimize the platform, and make sure it had the proper infrastructure in place to support partners during what promises to be the company’s most rapid expansion yet.

When Grimaldi’s decided to go the franchising route, Greenwald says, the brand met with experts who have scaled restaurants through the process. One thing kept popping up. “We heard this over and over and over—you pick a great franchisee and you put them through whatever you’re going to put them through, whatever your systems or tests or conversations or meetings might be—and they will run your business better than you can,” he says. “But if you pick the wrong franchisee, you’d be surprised how quickly it can go in the wrong direction.”

This is a critical point for a brand like Grimaldi’s, which has enough history to build—or destroy—a multi-unit company on. While every location can’t be like the Brooklyn Bridge original, known for its lengthy lines and nostalgic vibe, if new units and operators gloss over Grimaldi’s story and core traits, customers will notice. Guests have typically heard about Grimaldi’s before the food even arrives, either from trips to the Big Apple or solely off reputation. And if a franchisee doesn’t embrace that standard and everything that comes along with it—accountability, expectations, and so on—the franchising process will fall flat, Greenwald says.

What Grimaldi’s plans to do, he says, is bring perspective operators into the trenches before the ink dries. Have them live a day in the life of the brand to get a real sense of what it means to run a Grimaldi’s. “The only way to see if the glove fits,” Greenwald says, “is to try it on.”

Cultural fit is the key right now. It helps that Grimaldi’s is a pretty simplistic concept that doesn’t try to overstep its core equities. So franchisees will embrace that reality wholeheartedly or they won’t. But they definitely won’t be confused.

There are really only five focuses on the menu. Grimaldi’s specializes in whole pizzas, made with a 100-year-old dough recipe, as well as calzones and antipasto, and a variety of salads and house-made desserts, including cheesecakes. The brand has its own signature wine as well—the Mille Gradi red blend, which is produced in Tuscany.

“People have asked us, why don’t you do pasta, why don’t you do sandwiches,” Greenwald says. “If you want to know a great place to get pasta, I’ll make the reservation for you. But if you want the best pizza in the country, hopefully in the world now, you come to Grimaldi’s.” 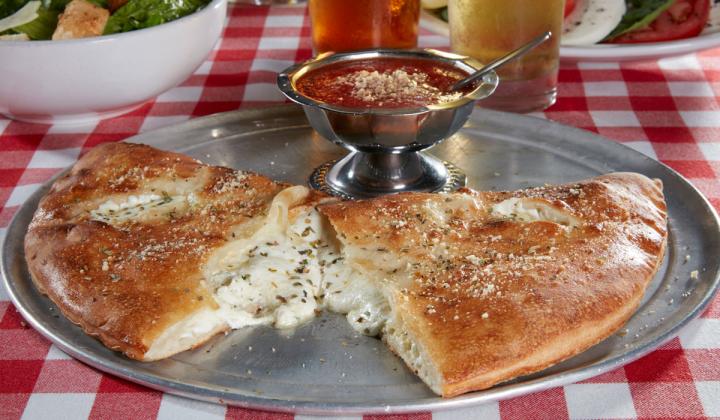 The menu isn't overly complicated at Grimaldi’s. Pizzas and calzones are the show-stoppers. 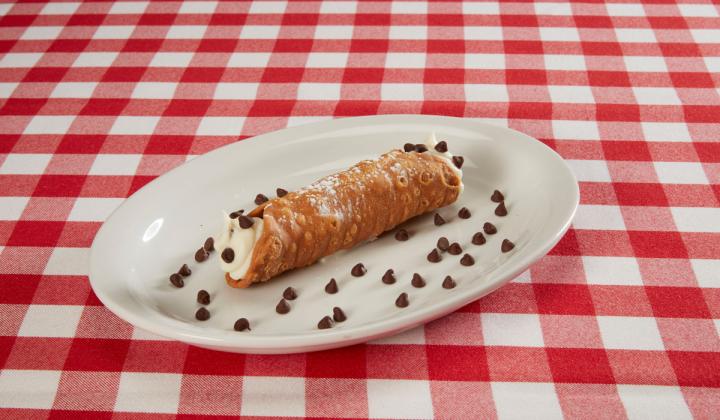 Grimaldi’s open kitchens and giant coal-brick ovens—heated by 100 pounds of coal per day at a temperature of up to 1,200 degrees—define each unit. The process gives its pizzas a smoky-flavored thin crust. Grimaldi’s also has a custom-water system designed to replicate New York City water (a key to bagels and pizzas in NYC standing out, or so locals claim). The ambiance is also instantly recognizable for fans of the concept. Red-and-white-checkered tablecloths. Sinatra-era tunes flowing from the sound system.

“We have that whole New York nostalgic energy,” Greenwald says. “We really need franchisees to fit that culture. Not only of the brand, but of our people and what we’ve created.”

As for how big Grimaldi’s can get, the graph below (which is dynamic and changing) shows where the whitespace lies for franchising opportunities. Greenwald says it’s too early to toss projections at the map but doesn’t see why there can’t be 200-plus locations in the not-so-distant future. 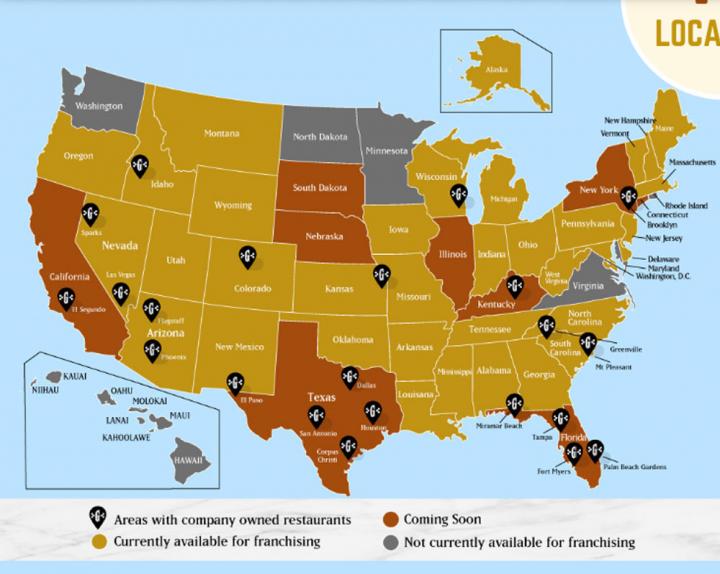 Can Grimaldi's get past 200 domestic locations?

More importantly, though, Greenwald says, Grimaldi’s wants to take a page from Starbucks’ book when it comes to scale. How people say, “That’s my Starbucks,” despite there being 13,000-plus stores in the U.S., Greenwald wants guests to feel the same about Grimaldi’s. “Our goal is to really maintain that local feel,” he says. “Whether it’s a domestic franchise or a company-owned store.”

He says the interest has been “a hair overwhelming and unbelievably humbling” so far. The original hope was to approach 50 units before thinking about other expansion opportunities. And from the outset, make sure systems were installed to grow rapidly if the chance presented itself. “When we built the model, we built it like we were going to franchise it, but really with no intention at the time of franchising,” Greenwald says.

That’s made for an easy transition. They came up with eight slices of culture, Greenwald says, will accompany Grimaldi’s expansion:

Greenwald says Grimaldi’s is looking for operators who want to add to their current portfolios. Entrepreneurs familiar with the franchising space who can run multiple stores. One established in the area who has territory demographics down pat. 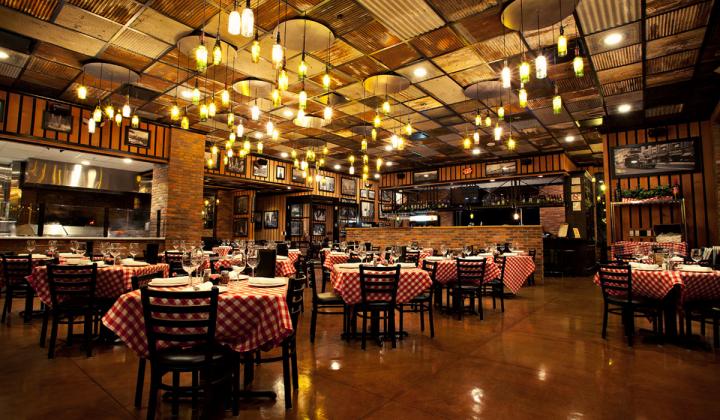 The vibe at Grimaldi’s is as recognizable as the food.

“Obviously our franchisee has to fit us as much as we fit them,” he says. “So it’s really about making that perfect match and that’s what we really based all of this on.”

“We heard there are some local, really great pizzerias, but nothing like us. And when we added Grimaldi’s to all the areas that we went in, we found very loyal fans very quickly there,” he says. That’s something he thinks can unfold in markets nationwide.

The Sparks, Nevada, location suggested different runway. Given the international flair of the area, Greenwald says, Grimaldi’s started to think bigger. They were receiving calls from interested operators outside of the U.S., including Canada and Mexico. Recently, Grimaldi’s signed a five-unit deal in Dubai.

Greenwald says domestic expansion will be the primary focus, but there’s no reason to put a lid on the possibilities.

“We are looking at everything,” he says. “