Harp & Crown takes a global approach to New American with dishes like the Spicy Soppressata Pizza (top left) with shishito peppers and honey.

Following stints in New York City, Philadelphia, and Tokyo, chef Michael Schulson launched his restaurant empire in 2008. Schulson Collective now comprises 10 hot spots dotting the East Coast. While his lauded concepts mostly revolve around Asian fare, the chef has veered into new and unexpected culinary directions of late, and Harp & Crown in Philadelphia—with a seamless blend of art deco charm, new American/global fare, and even a retro, two-lane, reservations-only bowling alley—may be the most intriguing to date. Here, he details the genesis of Harp & Crown, the company’s ambitious future plans, and his fortuitous foray into Italian fare. 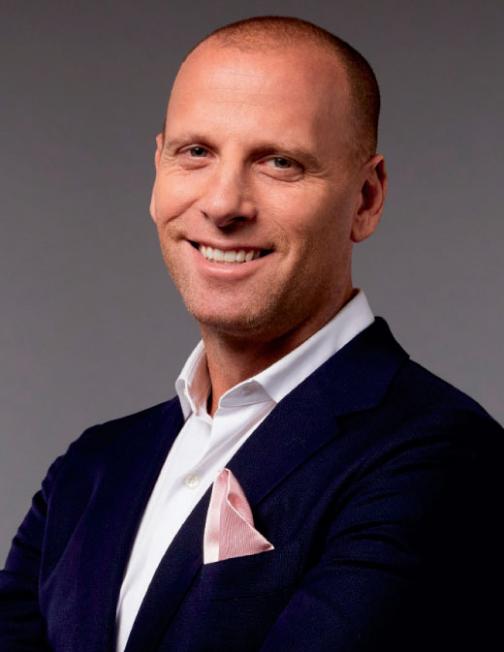 How did Harp & Crown come to be? We were knee-deep in [day-to-night Japanese concept] Double Knot and somebody came to me and said, ‘Hey, there’s a beautiful space down the street; you should take a look.’ We walked in and it was literally love at first sight. It’s not often in Center City that you see a 14,000-square-foot space and 24-foot ceilings. I knew it was something we needed to take advantage of.

Conceptwise, we wanted to do an American tavern paying homage to Philadelphia in the early 19th century. One of the great old taverns in Philly back then was called Harp & Crown, so that was our naming inspiration.

The design is so unique with its art deco charm. Was this approach influenced by the space itself? With those tall ceilings and beautiful brick walls, we knew we had to keep the integrity of the building. We built out a beautiful 40-seat, square bar that really adds to the ambiance. We did add two TVs, but we typically keep them covered up with wood-plank paneling. We’ll put them on for football and major sporting events—but in black and white.

When it came to decorating the space, we took a team to Brimfield Antique Flea Market in Massachusetts, which is one of the largest in the United States. We packed two 24-foot trailers to the brim with things we bought there and used our finds to decorate the space.

And how did that bowling alley come about? In the basement of the building was this space that stretched from one city block to the next with 9-foot ceilings and 20-foot-wide columns expanding from one end to the other. I looked at my wife, Nina, and said, ‘What in the world do we do with this?’ Right away she said, ‘How about a bowling lane?’ We then found out that the original Harp & Crown was on a street called Elbow Lane, and that’s how we came up with the name of the bowling alley.

What are some of Harp & Crown’s menu highlights? We spotlight seasonal American cuisine and cocktails with fresh, local ingredients. This winter we have a butternut squash salad with wild kale. There are three different colors of roasted root vegetables and braised beef short ribs with celery root purée for an entrée. Pizza-wise, we bake in a hearth oven, and our best-seller is the Spicy Soppressata pie with provolone cheese, shaved shishito peppers, and a drizzle of honey. You get that salty-spicy-sweet-acidic treatment. We just try to do good American food.

Since Harp & Crown opened, you also launched Giuseppe & Sons and took over at Osteria. Have you developed a newfound interest in Italian? Well, we’d been working on Giuseppe & Sons awhile. We have good friends, the Termini family, who have owned an Italian bakery in South Philly for 93 years. We partnered with them to do something downtown in Center City area. We built a 17,000-square-foot restaurant with 200 seats, which became Giuseppe & Sons.

While we were building that space out, another friend approached me after recently buying a restaurant called Osteria. He had realized he didn’t want to be into fine dining, so he asked if we’d be interested in buying it. It was already an amazing restaurant, and I said absolutely. I bought it with my partner, Jeff Michaud, and we shut it down for a bit to renovate and tweak the menu then reopened with Jeff as the chef. That’s how we ended up doing two Italian concepts back to back.

What else is on the horizon? This winter we plan to open Alpen Rose, a steak boutique where the meat is dry-aged and cut in-house. We’ll cook over an open-flame, wood-burning grill. We’re really excited; it’s this old-school, small steakhouse with beautiful chandeliers and crystal. It’s going to be really unique because you don’t see many 40-seat steakhouses.

Then around July, we’re opening a restaurant on Locust Street. It will be an homage to American food with an Italian spin, so I guess I’ll be into three kinds of Italian at that point.

Lastly, just after that we’re opening two restaurants right over the bridge in New Jersey: a Mexican concept and an Italian concept, which will put me up to four Italian. So then I’m done with Italian! It’s threatening to surpass my number of Asian spots, and I can’t have that happen. Maybe I’ll just need to open more Asian restaurants.