An 1870s Gothic revival church. A former blacksmith's quarters. A brick walk-up where Barbra Streisand used to perform on the balcony.

These historic locales don't sound like the average restaurant setting, but that hasn't stopped plucky owners and chefs from transforming storied buildings into restaurants with stories. The renovations come with their challenges, from high costs to a lack of modern heating, but owners say they reap rewards that new construction simply can't provide.

"If you're doing a concept that's very new, clean, and modern, it makes sense to be in a new building; otherwise, I think old spaces have charm and history," says Yassmin Sarmadi, owner of Church & State Bistro, which opened shop in the former Nabisco bakery and offices in Los Angeles.

The restaurant's history gives her staff something to tell customers that few competitors can rival.

Kevin B. Malone grew up surrounded by Civil War history in his hometown of Manassas, Virginia, 45 minutes west of Washington, D.C. As proprietor of the upscale dining venue that bears his name, "It was only logical that I would open my first restaurant in historic Old Town Manassas," Malone says. Perhaps less obvious was his selection of the former Manassas Presbyterian Church as the site for his restaurant, which opened February 2013.

Built in 1872, the church was an architectural landmark in the community, reflecting the population that lived there post-Civil War. From the exterior, with its red sandstone and Gothic, traceried windows, the restaurant still looks like—and could even be mistaken for—an antiquated church.

The renovation inside included a comprehensive kitchen update from the tapas restaurant that existed there before, which entailed replacing 65 percent of the kitchen equipment. Items replaced ran the gamut from refrigeration equipment and dishwashers to exhaust fans and ventilation hoods, as well as safety and fire-suppression equipment. Restrooms had to be updated and an existing HVAC system was replaced after the first year of operation.

Once the renovation began, several old relics were uncovered, including the antique Tiffany stained glass windows. As the old scaffolding was removed, personalities from the past emerged in details, like initials dating back to 1874 inscribed just below where the belfry had stood.

Today, dining tables sit comfortably near the old church's windows, so guests can look out over the town. The inviting ambiance reflects the contemporary American cuisine grounded in meats and seafood.

Malone says there's pride in reinvigorating such a historic building, though the fact that Malones is a historical site slows down architectural evolution. Malone wants, for example, to renovate the upstairs of the church into a 40-seat sports bar, though its approval will have to go through the National Trust for Historic Preservation first.

While he says it's impossible to calculate the renovation's total cost, Malone states, "I've found one major benefit of opening a restaurant in an historic building is that guests are not only experiencing award-winning cuisine, they are also engulfed in the soul of the destination." 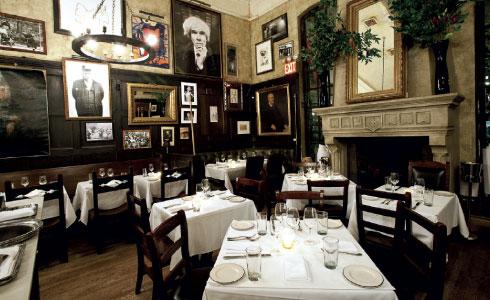 Diners at The Lion in the West Village always ask about the building and what used to be there before the restaurant. The staff love to tell them: In the 1920s and 30s it was a speakeasy, and it eventually gained notoriety as a spot where Mae West and Barbra Streisand performed on the balcony.

The charm of the old building on the corner of West 9th Street and Sixth Avenue appealed immediately to Largotta and his partners, Mark Amadei and John DeLucie. "I grew up Italian, worked overseas, and love Old World architecture, as well as buildings that have great history and structural bones," Largotta explains.

The partners fast-tracked the remodel and the Lion roared to life in May 2012, representing Crown Group Hospitality's first building and restaurant venture together.

The building's century-old structure required some finagling. In the speakeasy era, the kitchen was on the second floor, but Crown Group Hospitality transferred it downstairs and refashioned it to reflect the old New York-style—open and visible to diners—and that, too, required considerable design efforts. A mechanical engineer came in to determine the building's capacity to support the tonnage and wattage demands of high-performance equipment; a steel beam had to be added to the balcony, since it wasn't up to code; and the HVAC required a new system on the roof.

"This renovation actually posed more of a challenge to us," Largotta says. "The piping was archaic and hadn't been touched in 40 years, so the challenge was to get the building up to code and also restore it very carefully."

Today, the salon-inspired dining room lends itself to hearty comfort foods. The walls are delightfully smothered in more than 60 framed artworks, from a close-up of Andy Warhol to photos of historic criminal families lifted from the New York Daily News archives.

Despite the extensive work, Largotta says the project was rewarding on many levels. "For me, I love to curate spaces, not just create them." 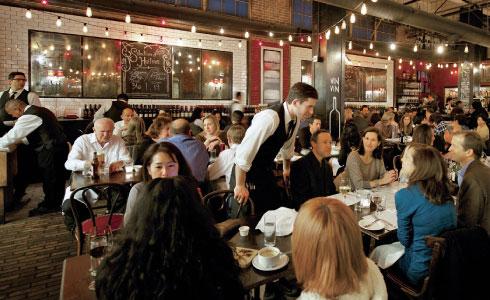 "This building was an old factory for Nabisco, the National Biscuit Company—so that was special to me because they created food there, and that is what we are doing at Church & State Bistro," says Yassmin Sarmadi, proprietor of the French bistro that opened in 2008, nestled into the arts district of downtown Los Angeles.

It was a floor-to-ceiling project for the building constructed in 1925: Brick flooring from the old biscuit company's loading dock was laid down as the foundation of Church & State, while bricks from elsewhere in the building were used to extend the storefront and construct the outdoor patio.

The remodel came with a price tag of $832,000 as well as some rare accommodations. Even before Church & State began its renovation, the building's developer had already completed structural retrofitting in 2006, making way for several floors of loft units that reside above the restaurant. This structural backbone made the kitchen hood impossible to vent normally through interior air ducts, so the restaurant installed a new vent system, along with an HVAC unit.

"The building was a blank slate," Sarmadi says. "We were able to build the restaurant out while maintaining the integrity and history of the building."

This gave Sarmadi the freedom to design the interior with a decidedly French touch: chairs with rounded wooden backs, food and drink specials scribbled in chalk around the interior, and tables positioned in cozy proximity to each other to foster a community feel.

Despite the hefty price of renovation, the restaurant is just as the owners had hoped. Sarmadi says she has a fondness for old buildings, which come with a warm aesthetic built-in.

"The history of the building evokes conversation as people want to know where they are— especially in a town like Los Angeles, where there isn't that much history," Sarmadi explains. "It gives the service staff, and certainly me, the opportunity to have a conversation with people, to tell them where we are, why we're here, that the floor they are sitting on was laid down in 1925, that the mirror they are looking at was the bay of the loading dock." 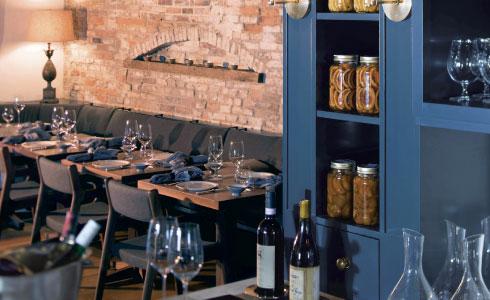 Transforming Fish & Game from its roots as a 19th century blacksmith shop in the Hudson Valley into a farm-to-table restaurant wasn't easy.

"This building had every ounce of period material removed," says Michael R. Davis, the architect who led the Fish & Game project. The building had been home to multiple businesses, including a late-night sausage and hot dog eatery, before Fish & Game opened there in May 2013.

At the time Davis started with his renovation, all that was left of the original architecture were two brick walls standing on stone foundations. Those walls became the focal aesthetic point for the interior of the restaurant, whose concept evolved after Patrick Milling Smith, the film and theater producer, bought the building. Smith involved the restaurant's husband-and-wife chef team, Zakary Pelaccio and Jori Jayne Emde, as well as Davis, in the renovation. All of them shared a desire to create a restaurant that was "distinctly Hudson," Davis says.

Davis salvaged what elements he could of the period masonry and combined them with contemporary methods to create a rustic setting and ambiance.

Both exterior chimneys were constructed from brick and stone salvaged during the renovation, and the makeover introduced a handful of charming elements, such as the fireplace in the dining room and the kitchen brick oven. The kitchen itself was built in a single-story extension created solely for that purpose, in what had previously been a parking bay off the back of the building.

While Davis led the facelift of the old blacksmith's shop, the owners set up a small farm called Fish & Game Farm five minutes away from their eponymous restaurant. The farm boasts crisp produce, free-range chickens, onsite beekeeping, and trees, which provide the restaurant with fresh-tapped maple syrup.

Between the farm-fresh produce and the old-world décor, retrofitted with handsome leather couches and dark wood finishes, Fish & Game earned a semifinalist nod for best new restaurant by the James Beard Foundation this year.

"Working with historic buildings is not to be undertaken lightly, and can add complexity and expense to a renovation," Davis explains. "Handled sensitively, however, an historic building can lend character and ambience to a restaurant that might be impossible to achieve otherwise." 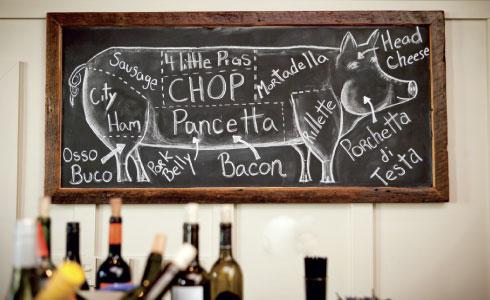 When executive chef Kevin Johnson wanted to open a restaurant in Charleston, South Carolina, he faced a head-scratcher: In a city renowned for its historical character, there was little vacant land, and city guidelines prohibited new buildings.

Casting around for real estate, Chef Johnson came across Altman's Furniture, an old furniture warehouse built in the 1950s in the city's historic downtown area. With its high ceilings, brick walls, and concrete flooring, the architectural frame fit perfectly with Johnson's vision of The Grocery.

"The owner built the warehouse as a two-story furniture showroom," Chef Johnson explains. "His sons grew up running around the building and, as adults, converted the upstairs into their law offices."

The site required an overhaul of everything but the existing ductwork. Additions included new water lines, plumbing, electrical setup, air handlers, and a 17-ton HVAC system. Johnson also had a large wood-burning oven, four ranges, a fryer, a walk-in cooler, a dishwasher, and seven workstations installed in the kitchen. In all, the remodel rang in at $800,000.

In addition to the hefty price tag, the downside of renovating an old building was the time it required—The Grocery took the better part of a year to complete, though Chef Johnson says the wait was well worth it. His restaurant, fashioned after a small-town grocery and serving seasonal menus, has received accolades for both its food program and its archaic allure.

"Older buildings have stories to tell," he says. "We certainly wouldn't have that story in a new building, and I like the layers and depth created by the refurbishment of an old building."

As for the former owners of the warehouse and law offices? "They are now good customers at the restaurant," he says.