The classic buffet chain is forging ahead with a revamped image.
January 2019 Rachel Taylor

In order to keep up with the growing competition and draw a younger crowd, Golden Corral is undergoing the company’s largest redesign yet as it aims to revamp the look and feel of its restaurants.

The Gateway prototype features a contemporary look, which includes stone exterior features, wood-toned interior ceilings, and a double-sided fireplace. The dining rooms are broken up into more compact, intimate spaces, which allow guests a quieter dining experience. The enhanced buffet platform now offers more interactions with servers who refill drinks, clear tables, and make sure customers have fresh plates when they go back for another round.

Unlike other companies who outsource restaurant designs and pass along prototype plans to franchisees after corporate approval, Golden Corral wanted to give the power of design to its franchisees. Of the 490 stores, only about 40 are company-owned. It made sense then to involve franchisees from the beginning, says Golden Corral’s vice president of franchise development Van Ingram, who joined the company last October.

“We, from day one, had franchisees on the exploratory board,” Ingram says. “They were the ones who met with the design company. They helped pick the design companies we chose. And then they were actively involved in every step of the way developing the new prototype.”

Some Golden Corral locations were built 25–30 years ago, and those stores were reaching their life expectancy. The maturity of the brand and deep roots franchisees had in their communities factored into the development of the Gateway prototype. “We had to come up with something that helped our franchisees maintain the business they had already created, but then also appeal to today’s customer,” Ingram says.

Considering the age of these older units, the company customized plans to fit outdated locations. “We know in some of the locations if it’s an older store in our system there may not be the room,” Ingram says. “There may not be the structural integrity or structural capability to integrate some of those elements, so we go in and we have different applications for different levels of prototypes depending on when they were built in the past.”

“We have a lot of mature stores that have been in their towns for a long time and are very successful,” he adds. “We just want to make sure when we rolled out the Gateway it would be for new stores going forward, but could easily be implemented into our existing locations. These people invested a lot of money when they built that restaurant to begin with. We just want to find a good way to make sure their investment has legs going forward.”

Over the past year, franchisees and customers alike have become more attracted to the new prototype. The renovated store in Greensboro, North Carolina, was seeing a sales boost as well. “Our first [Gateway prototype] that was opened by a franchisee has had a significant sales increase, much higher than what the industry average is for a remodel or refresh or upgrade that people have done,” Ingram says. “We were able to prove to them the Gateway works, customers respond to it and they’re willing to come back and see it as something different.” 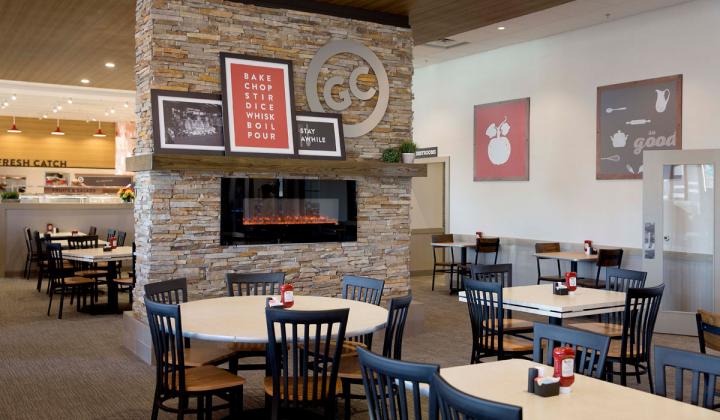 It made sense then to involve franchisees from the beginning, says Golden Corral’s vice president of franchise development Van Ingram. 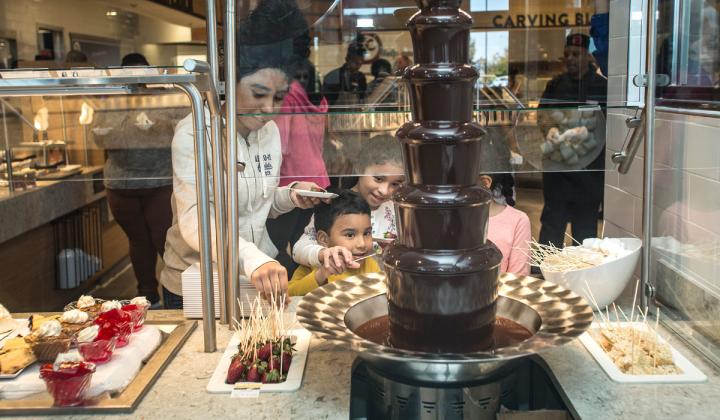 Over the past year, franchisees and customers alike have become more attracted to the new prototype.

The Gateway prototype is not only improving existing customer traffic, but it is also growing engagement with customers who might not have considered dining at the brand before the renovations.

“We always want to broaden our horizons and bring in more customers,” Ingram says. “People who may have not considered Golden Corral in the past would potentially look at our new prototype and layout and say, ‘hey I want to give that place another try.’”

This proof of concept led to more and more franchisees signing on for the new look. Golden Corral franchisees must, at some point during their franchise agreement, go through a store refresh. Ingram says, “These franchisees that have to do something to upgrade their store—because if you’re not upgrading or refreshing your location it’s going to get stale for customers.” More and more franchisees are using elements of the Gateway design to update their locations.

Currently, 42 units are undergoing a Gateway refresh. When those locations come up for their renewal term, Golden Corral will complete the remodel. More franchisees are looking at doing early refreshes and complete remodels because they want locations to be as successful as the other prototype stores have shown to be.

The initial Gateway design transformed over the past year. In order for the design to be successful systemwide, the company listened to customer feedback. “We’ve gone back in and did kind of a post mortem on [the Gateway stores] and determined what’s working, what’s not working, what are some things that we can tweak to make it even better,” Ingram says.

The Gateway prototype is an important part of Golden Corral’s growth strategy. Ingram says it will help improve the success of existing franchisees and attract new operators in the future. “The function of [Gateway] is twofold,” Ingram says. “It is to bring in new entities to get new capital invested into the brand, but then convince and provide the motivation to get our existing franchisees, the people that are already out there operating, to get them to add stores to their portfolios as well.”

Golden Corral has its foot in most markets across the U.S. However, there are some areas where the brand sees opportunity to still grow. Some potential markets: Pennsylvania; Washington; Oregon; and more specifically, Des Moines, Iowa; and Northern California.

One surprising area Golden Corral has found success in is Southern California. In 2018 alone, the company signed eight new franchise entities to develop their first locations with Golden Corral and 14 other unit commitments were made by existing franchisees. With an average investment of $4 million and $5 million per unit, these commitments brought in a large amount of new capital for the company.

Ingram believes Golden Corral’s success in Southern California can be attributed to the chain’s strong value play and how that resonates. “We do well in certain populations and that population is represented in California,” he says. Since 2012, when the first Golden Corral opened in the City of Industry, there have been 19 store openings with another two slated to open in 2019.

Golden Corral’s homestyle offerings aren’t the typical menu items you might see in California-based restaurants. By offering comfort foods like pot roasts and fried chicken along with healthier offerings, the company’s menu variety attracts a broader crowd. “People can go in and get a very healthy meal if they choose to or they can get a very unhealthy meal if they choose to,” Ingram says.

Ingram says the company is seeing an increase in younger franchisees attracted to working with Golden Corral. Millennials, especially those with families, appreciate the variety of food Golden Corral’s buffet dining style offers. Having those choices makes it easier to dine out with children.

“We’re finding that the franchise prospects that are coming in are being driven to us because their kids were part of looking at Golden Corral, felt an affinity our brand, and wanted to be involved with it,” Ingram says.

Millennials are known for their philanthropic efforts and, specifically, choosing brands and products that are sustainable or have a cause attached to them, Ingram says. Having younger franchisees who care about connecting business with giving back is important for Golden Corral. Philanthropy runs deep in the company’s culture. “That’s one thing that Golden Corral is a leader in in the entire industry,” Ingram says. 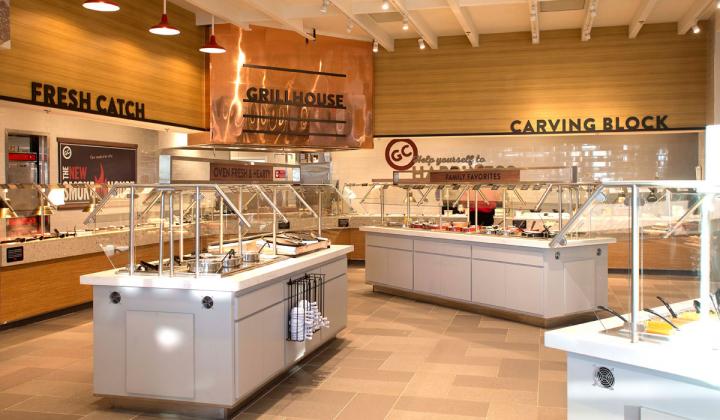 More franchisees are looking at doing early refreshes and complete remodels because they want locations to be as successful as the other prototype stores have shown to be.
“It’s a really good mix of experience, longevity and knowledge of Golden Corral, and what we mean to our franchisees and our communities where we operate our restaurants." — Golden Corral’s vice president of franchise development Van Ingram.

Golden Corral’s Camp Corral allows the children of active military members and veterans to have a fully paid and sponsored camp experience. Over the past eight years, $11 million was raised for the camp and more than 21,000 people have been able to “enjoy a carefree week away from what their life was on a general basis for free,” Ingram says.

“That’s one important thing [we talk about] when we bring in new franchise prospects groups in for their corporate interview,” he adds. "We talk with them about this but many of them are already familiar with it because it’s touched them in some way shape or form before they ever came into become a franchisee.”

Many of the millennial franchise prospects aren’t going into the deal alone. More often, Ingram sees millennials as the driving force of the investment or partnership. In a two- or three-person deal, for example, at least one person is usually younger and is helping guide a family member, business acquaintance, or mentor with the investment.

“New franchises are a combination of generational considerations,” he says. “Millennial-aged individuals entering the system is a great step for us because we have a more mature system, and we need that new injection of new capital, new ideas, new franchisees to run this brand for our 100-year plan.”

Golden Corral is only 46 years into its 100-year plan. The new prototype, growth, and addition of new franchisees are building blocks for its long-term success.

“It’s maintaining a legacy brand and then making sure that legacy brand has legs going forward,” Ingram says. “This brand will be here in 54 years so we’re not even halfway through what is the 100-year plan for Golden Corral and that’s going to require that we evolve. So we’re constantly doing those things as well.”

He adds, “It’s a really good mix of experience, longevity and knowledge of Golden Corral, and what we mean to our franchisees and our communities where we operate our restaurants. Then it’s also new people being integrated into the system to make sure that we’re evolving that we are providing innovative options like the Gateway prototype.”