Situated on the 18th floor of a hospital, WoodWind’s location is anything but conventional.

With an eye on brand awareness and revenue, sit-down brands are looking outside the typical storefront.

Matt O’Neill never envisioned opening a restaurant in a hospital.

In fact, when representatives from Northwestern University reached out to O’Neill’s Craveable Hospitality Group and asked about its potential interest in opening a full-service restaurant at the university’s downtown Chicago medical campus, O’Neill balked at the overture.

Not only did O’Neill, vice president of culinary at New York City–based Craveable, question the viability of a full-service concept at a hospital, especially one inhabiting a space 18 stories above the street, but he noted that GreenRiver, the Michelin-starred eatery and cocktail bar from Danny Meyer’s Union Square Hospitality Group and New York City’s Dead Rabbit, lasted little over two years in the same space.

“There was reason to hesitate,” O’Neill allows.

But when O’Neill and his colleagues toured the space, their entrepreneurial energy intensified. They envisioned a more approachable concept, brainstormed food-and-beverage programs catering to the hospital’s 9,000 employees, and discussed ways to leverage the 400-seat banquet hall punctuated by stunning city views. After a year of negotiations and a six-month prep period, Craveable opened WoodWind last October. 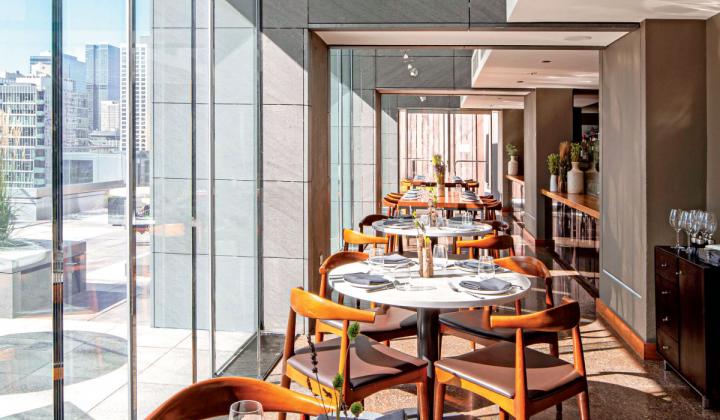 Between the restaurant and patio, WoodWind can seat 200 guests.

“And we’re off and running,” O’Neill says of his firm’s upscale American concept that features an 80-seat restaurant, a 120-seat patio, a speakeasy, and lounge.

While shopping malls have long been the major nontraditional hub for full-service eateries, restaurateurs like O’Neill are increasingly bringing their game into venues once dominated by quick serves, buffets, and utilitarian foodservice concepts championing speed and function over quality and pizazz. At casinos and colleges, arenas and airports, water parks and food halls, full-service restaurants continue entering nontraditional spaces with an eye on capturing brand awareness and revenue—though it’s been a slow march, says longtime industry observer Gary Stibel, CEO of the New England Consulting Group.

“We’ve been beating this drum for years, telling restaurants to look into these nontraditional spaces, and they’re finally coming around,” Stibel says. “We see it as a revenue extension with a large, captive audience willing to pay and play, but also as a trial device that can drive traffic to traditional restaurant locations.”

“You ate at airports because you had to,” says Vito Buscemi, vice president of brands and concepts for Delaware North, one of the world’s largest privately held hospitality management groups.

Airlines have largely ditched in-flight meals, and at the same time, added security procedures have dictated earlier airport arrivals. The combination of these factors has put a spotlight on airport food and drink. And now, per Buscemi, airports of all sizes are devoting resources to food-and-beverage outlets that are more customer-focused.

“We didn’t differentiate the street from the airport,” says Buscemi, whose firm played a leading role in the airport’s dining reinvention. “Now, the culinary experience starts at the airport.”

Natalie Davidson is a senior interior design lead with Arcsine, an Oakland, California–based design and architecture firm that specializes in restaurant spaces. She has also observed airports’ ambitious efforts to redefine dining.

“These airports are going after notable chefs and local concepts, pressing for that local vibe that gives travelers a sense of place,” Davidson says.

“The Centurion Lounges have upped the game, changed the whole complexion of airport dining, and served as an example of the opportunity when restaurants provide quality to guests in environments where there is little currently available,” Stibel says.

Airports are far from the only nontraditional venues welcoming full-service restaurants inside their doors. Like airports, sports and entertainment venues, such as ballparks and arenas, traditionally favored function over form, but they, too, are changing. Sports stadiums are pursuing a livelier game-day experience while also adding special events like concerts to the roster, thus bringing in year-round revenue. Full-service restaurants have, accordingly, inherited a more prominent role both inside the bowl as well as outside the arena’s walls in connected entertainment districts.

Outside Lambeau Field in Green Bay, Wisconsin, for instance, the Titletown district mixes a large public park with a variety of full-service restaurants, including the Hinterland Brewery and Restaurant and The Turn, a recent arrival that features Topgolf’s virtual gaming technology.

“There’s a lot of vacant time in these destinations, and that’s compelled the development of more year-round amenities that people can enjoy more frequently,” Buscemi says of sports venues.

“These landlords want to find ways to bring people into their spaces, and dining is one potential way to do that,” says Roth, adding that so-called eatertainment concepts like Punch Bowl Social and Pinstripes prove especially enticing, given their ability to attract through dining and entertainment.

Full-service restaurants are also finding a place in food halls, which continue popping up in markets across the U.S. Though Boston’s new Hub Hall, like many food halls, is dominated by quick-service brands, the 16,000-square-foot dining emporium did carve out room for one standalone full serve: Momosan Ramen Boston from “Iron Chef” Masaharu Morimoto. Buscemi touts food halls as an inviting venue in which full-service eateries can deliver signature items, test concepts, and propel brand awareness. 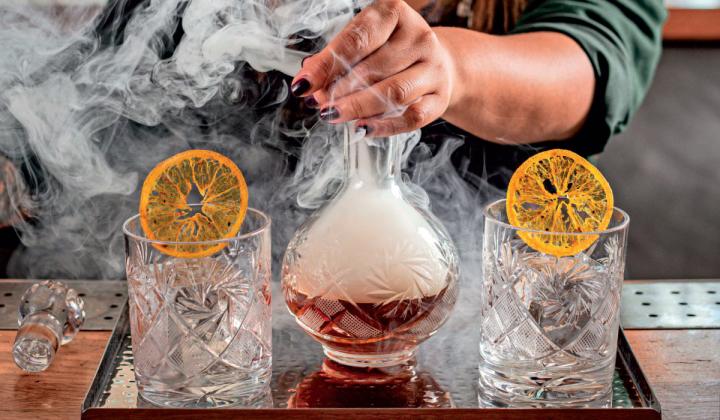 At WoodWind, the beverage menu boasts nearly a dozen craft cocktails, including the Smoked n’ Mirrors.

And the more that full-service restaurants establish themselves in nontraditional settings, the more consumer appetite for such dining experiences will accelerate, Buscemi says. The dynamic will likely spur deals, thereby opening even more possibilities for full-service concepts and possibly leading the trend to snowball.

“People are now eating at these [nontraditional venues] because they want to, and that’s created new opportunities that restaurants are looking to capture,” Buscemi says.

“It’s definitely romantic to see a captive audience,” he says. “I wouldn’t say the industry is swaying toward nontraditional spaces, but I do think it’s an area that’s evolving, and there’s opportunity for those who are creative about it.”

The Message is Clear: On The Border is Back
Red Lobster to Name One Lucky Fan its First Chief Biscuit Officer
Jon Taffer Inks Agreement to Open Taffer's Tavern in Washington, D.C.