“It was time to transition into something different. We needed a fresh start.”

5 Tips for Remodeling Your Restaurant

Expert advice from five restaurants that started from scratch on their space.
February 2018 Daniel P. Smith

Greg and Gabi Denton knew it was time.

Though SuperBite wasn’t failing by any measure, the Dentons wanted to pivot their downtown Portland restaurant space toward a new direction. Between running their heralded restaurant Ox, a book project, and national events, the Dentons admitted they simply didn’t have the time to describe the ambitious SuperBite concept appropriately. And as a practical matter, SuperBite didn’t lend itself to lunch, either, a particular area of opportunity in downtown Portland.

To reinvent SuperBite as Bistro Agnes, the Dentons toned down the restaurant’s existing blue walls, removed a five-seat chef counter, expanded the kitchen to accommodate a walk-in fridge, added track lighting in the dining room, and lowered the height of booths to provide better viewpoints into the restaurant.

“It was time to transition into something different,” Greg Denton says. “We needed a fresh start.”

In spaces across the country, from New York City’s Eleven Madison Park to San Francisco’s State Bird Provisions, restaurant leaders are taking on the mighty task of remodeling and sometimes even reconcepting their existing spaces to keep pace with the competition.

From Lark to Southpaw 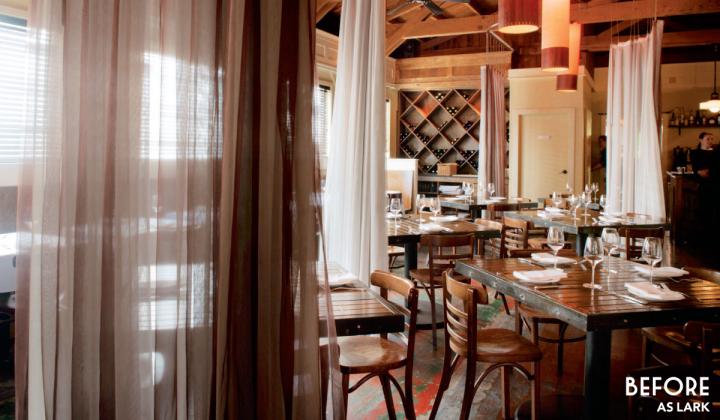 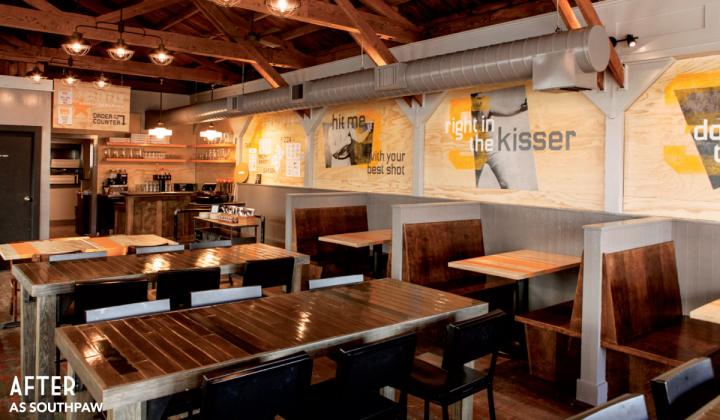 Chef John Sundstrom traded the sophistication of Lark for a more punchy vibe at Southpaw.

“We made Southpaw much more casual and approachable, but still something different than the norm,” Sundstrom says of the 1,700-square-foot restaurant, which debuted in December 2016.

“Compared to Lark, Southpaw has a more lived-in feel, and people have been overwhelmingly positive about the space,” Sundstrom says.

Remodeling Tip: “It was difficult to see the restaurant with fresh eyes and detach from something so familiar. That’s why we invested our money not as much into buying new things, but rather into utilizing our designers’ time. Working with pros to help us concept the idea and design the space made a big difference. We were better able to see the opportunities for improvement and how to tell a cohesive story throughout the space.” 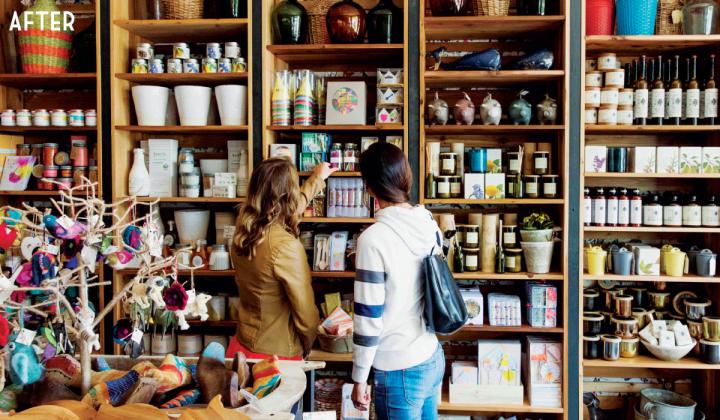 For the first 18 years, Borkum’s Kensington Grill earned a loyal following and sparked Borkum’s Urban Kitchen Group empire in Southern California. In 2014, she re-created the space as Fish Public, a chic seafood concept. But when Borkum quickly sensed Fish Public was struggling to gain traction, she began plotting another metamorphosis for the space, which carried a favorable lease, as well as Borkum’s heart.

She dispensed a 20-question survey to neighborhood residents about their dining interests. Collecting some 450 responses, the survey made it clear residents desired their own version of Borkum’s already successful Cucina concept.

In mid-2016, Borkum closed Fish Public and spent the next year fashioning the 3,500-square-foot space into Cucina SORELLA.

While keeping “the bones” of Fish Public intact, including repurposing the existing open oyster bar into a pasta-making area, Borkum otherwise transformed the space in her signature bohemian chic design aesthetic. She added pops of bright colors and floral prints, plush pillows and textiles, custom-made fixtures and furniture.

Borkum also carved out space at the front of the store for retail, an area selling Cucina SORELLA’s house wines and sauces alongside other “boutiquey” items such as candles, soaps, and hand creams.

“Retail gives the space a secondary experience and an invitation for people to stop in beyond dining,” she says.

Knowing she needed something dramatic to signal the shift, Borkum devoted much of her budget to two big-ticket items: enlarging the existing windows and overhauling the building’s exterior, punctuated today by a neon Cucina SORELLA sign sitting atop wooden planks in a herringbone pattern.

“We needed to mark this space as something new, and you can’t do that just by slapping a new color on the walls,” Borkum says.

Remodeling Tip: “Take your time, run the numbers, and really consider where you’ll get the most bang for your buck. Opening up the windows was expensive, but it created a major impact for our space.”

Spiaggia Gets a Fresh Look 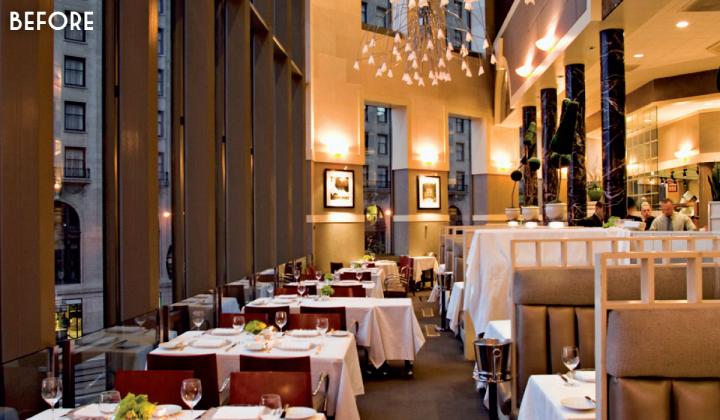 One of Chicago’s most renowned restaurants, spiaggia ditched its wood and marble tones for brighter colors. 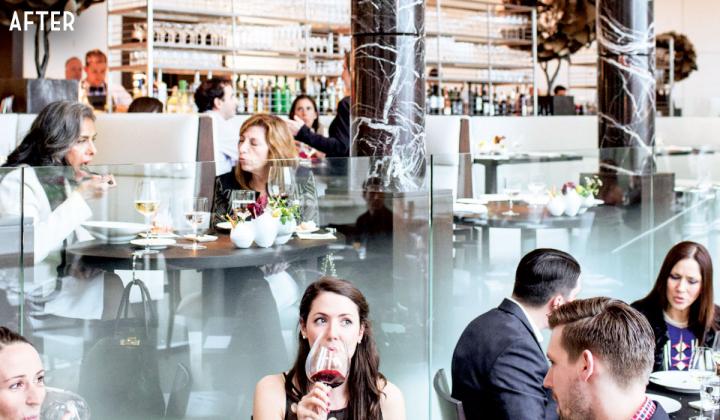 “The space started feeling dated to us. We needed to freshen it up and remove the stuffiness.”

As landmark Chicago restaurant Spiaggia approached its 30th anniversary in 2014, management embraced the milestone as an opportunity to reimagine the award-winning restaurant known for its enterprising cuisine, dramatic 40-foot ceilings, and sweeping views of Chicago’s cityscape.

“The space started feeling dated to us,” chef-partner Tony Mantuano says. “We needed to freshen it up and remove the stuffiness.”

At the start of 2014, Mantuano and his team quarterbacked a five-month renovation project. Crews enlivened the space by replacing dim wood tones and dark marble with brighter colors, and they moved the bar, long anchored to a sidewall, into the center of the 90-seat dining room. That move alone transformed the space, which also ditched its white tablecloths and jackets-required policy.

“Moving the bar proved to be a giant hit for us,” Mantuano says. “People at the bar were now a part of the action, and it completely energized the space.”

Spiaggia leadership also decided to create a posh, 25–30-person lounge space featuring soft seating and contemporary adornments. Almost immediately, however, Mantuano and his partners recognized the lounge, while great in theory, was a bust in reality.

“We just couldn’t get people to leave the bar,” he says.

Leadership acted quickly, flipping the lounge space into a 20-seat, glass-enclosed private dining room that has turned out to be a brilliant move. Mantuano says the private room is booked five to six days each week and produces significant revenue.

“That’s a reminder that you can’t be too married to your ideas,” Mantuano says.

Nearly four years after completing its renovation, Spiaggia continues its decades-long run as one of Chicago’s most heralded restaurants.

Remodeling Tip: “Do a competitive set. Spend two to three days visiting other restaurants and seeing what’s out there. We went to restaurants in Chicago and elsewhere to take the temperature of the dining public, and that greatly informed our renovation.” 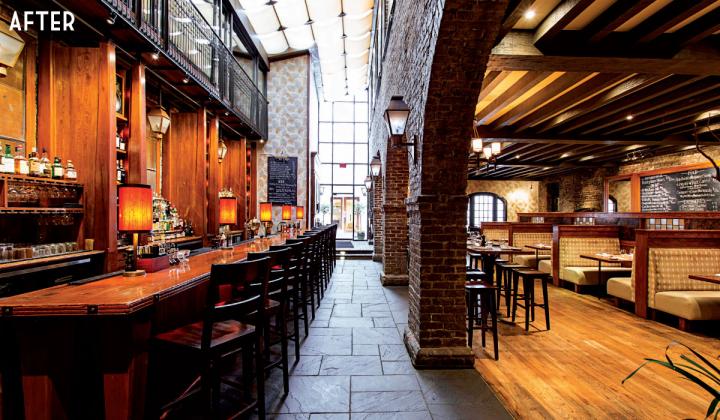 In a move to knock the formality out of dining at McCrady’s, one of Charleston, South Carolina’s most revered restaurants, Neighborhood Dining Group president David Howard and his team abandoned fine-dining traditions and carved the expansive space at 2 Unity Alley into two distinct concepts: McCrady’s, a 1,000-square-foot tasting room, and McCrady’s Tavern, a 3,000-square-foot, pomp-and-circumstance-bashing sister concept.

“Evaluating what lies ahead, we analyzed our concepts, and it was clear we needed to provide a more relaxing, casual environment for our guests,” Howard says.

In August 2016, McCrady’s, which opened 10 years prior inside an 18th century building that once hosted George Washington for dinner, closed on a Saturday. Two weeks later, the tavern space debuted. Six weeks after that, the 22-seat tasting room opened with a handmade walnut counter, along with freestanding tables.

On the 100-seat tavern side, Howard eliminated alcoves separating the bar from the dining room and discarded the formal upholstered seating and white tablecloths. In its place, he installed an oversized community table, copper-topped tables, and cozy booths. Howard also removed all of the fine art that lined the walls, exposing the building’s centuries-old natural brick.

“After all,” Howard says, “history like that is why people come to Charleston.”

In a restaurant that needed a punch of energy, Howard says, the renovation and more laid-back tavern concept has given McCrady’s fresh momentum, a new clientele, and increased guest counts.

“We took away the unnecessary clutter and unnecessary formality, because that’s the direction we felt would serve us well moving forward,” Howard says. “So far, so good.” 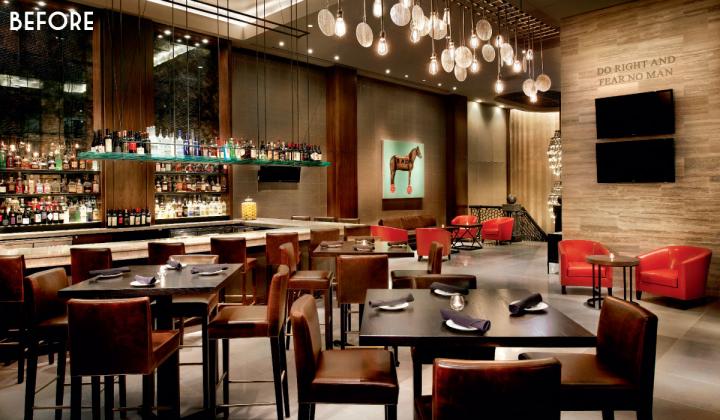 In late 2017, Texas-based Del Frisco’s Restaurant Group initiated a contemporary refresh of its Double Eagle Steakhouse in Chicago, one of the concept’s 13 locations peppered across the U.S.

“Especially at this price point, we wanted to bring warmth to the space,” general manager Don Adams says.

The new seating arrangements reduced capacity from 382 to 284.

“But now there’s a more spatial feeling of comfort,” Adams says. “Some seating areas that weren’t the most desirable before are the most sought after today.”

Once carrying a lighter feel with pastel colors, the remodeled dining room possesses a bolder feel today, with walnut paneling and darker hues, including a weighty marble table sitting adjacent to the restaurant’s breathtaking three-story wine tower. But Del Frisco’s extended its remodel beyond the steakhouse’s main dining room.

“This was underutilized space that we’ve turned into a new entity Chicago will take notice of,” Adams says.

Remodeling Tip: “Don’t overlook spatial alignment. If you think a table is too tight with another or a walkway is too narrow, it probably is. Given the money guests are spending, they’re looking at the entire experience, which includes food and service as well as the environment of the restaurant, right down to where they’re sitting and the space they occupy.”