The Golden Lamb is one of America's most historic inns, and Ohio's oldest continually operated business.

The FSR annual Top 100 report salutes restaurants that are legends and landmarks, and—in some instances—measuring success across centuries.

Imagine owning a restaurant that’s older than our Independence Day celebration. Impossible for most of us to grasp, but restaurants that have stood the test of time are lessons in excellence and entertainment. This collection of Top 100 Independents pays tribute to some of the industry’s oldest and most esteemed operations, including more than half of which have operated for 100 years or more. History always comes with its share of skeletons in the pantry, ghosts returning to haunt, and colorful stories—so to some extent there are restaurants among the group that are thriving on their own reputations.

Check out the Top 100 Independent Restaurants from the 1900s.

The younger “oldies,” those that are 35 to 50 years old, are equally interesting because they’ve managed to succeed across decades without the benefit of historical precedence. Many of these independents have transitioned across multiple generations as well as through shifts in ownership and catastrophic events. Following the profile on Commander’s Palace, our Top 100 is presented from oldest to youngest, including some of the highest-grossing restaurants in the industry and others with modest, but sustained, performance.

See the 2016 story on the Top 100 Independents
Footnote: All sales reflect the annual revenue of the restaurant. The average check is per person and for food only, unless otherwise noted. Estimated figures are indicated as E. 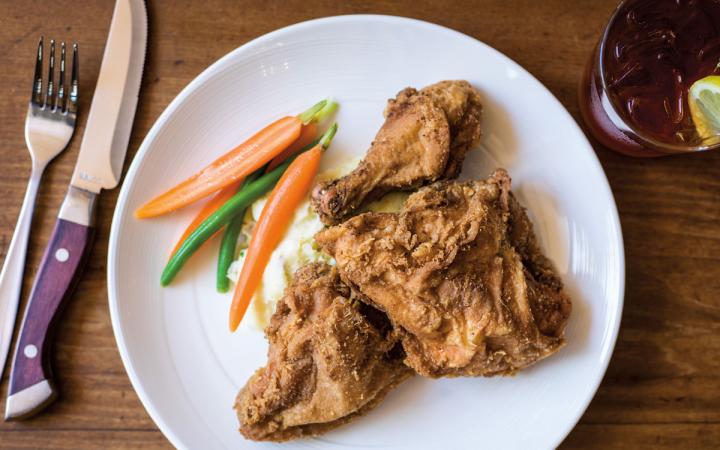 The Golden Lamb has been visited by a dozen U.S. presidents.

The family of the longest-serving innkeeper, Robert Jones, who purchased the property in 1926, still owns the Golden Lamb. It has been visited by a dozen U.S. presidents, ranging from John Quincy Adams to George W. Bush.

Built by Joseph Huston Sr., the tavern has been continuously serving the public for 180 years and is now owned by the State of Missouri. Listed in the National Register of Historic Places, the tavern initially served as the family home and then became a respite where immigrants heading west could spend the night and eat.

In 1923, a local resident, along with the Daughters of the American Revolution, persuaded the Missouri legislature to purchase the tavern for $5,000, making it the first building in the state set aside for historic preservation using public funds.

Flamenco shows could rival the food in popularity.

Said to be the birthplace of American classics: the Delmonico Steak, Eggs Benedict, and Baked Alaska. 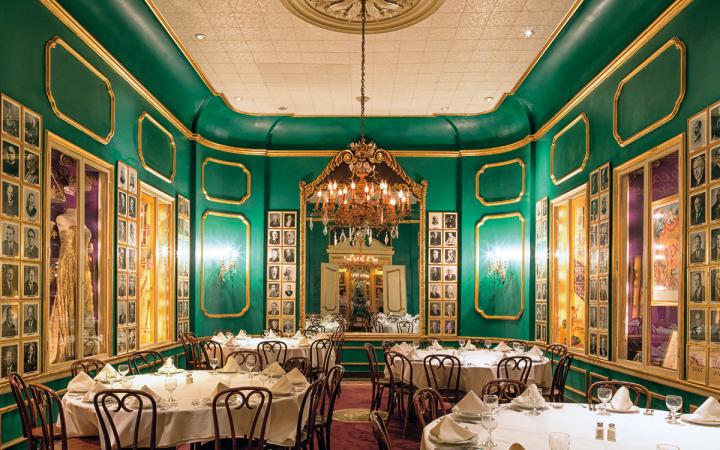 Antoine’s has one of the most impressive wine selections in New Orleans.

Antoine Alciatore set up the restaurant, which has remained family-run and claims to be the inventor of Oysters Rockefeller. The current location opened in 1868, a block from the original restaurant. Bill Clinton, Franklin Roosevelt, and Pope John Paul II are only a few of the notables who have dined here. The Wine Cellar, which measures 165 feet by 7 feet, holds around 25,000 bottles.

Claimed to be the oldest restaurant in this city, it was started by Croatian immigrants and went through a couple of names and temporary locations before settling on the name Tadich Grill in 1912.

Within a span of just 10 months in 2007 and 2008, Breitbach’s was destroyed by fire twice, but managed to rebuild both times.

It’s the birthplace of the Boston Cream Pie, Parker House Rolls, and Boston Scrod. Culinary and political history abounds: Emeril Lagasse got started in this kitchen; John F. Kennedy is said to have proposed to Jackie here; Vietnamese leader Ho Chi Minh served as a baker from 1912 to 1913; and Malcolm X was a busboy in the 1940s.

Said to be the oldest saloon in Washington, D.C., it’s existed in a number of locations and has welcomed presidents dating back to Ulysses S. Grant and Theodore Roosevelt.

Opened as a restaurant and trading post by Seth Hays—Daniel Boone’s great-grandson—Hays House has been the site of many activities, from church services to theatrical performances. Tavern bottles were allegedly covered on Saturday night so church services could be held Sunday morning, and legend has it that the restaurant served Jesse James and George Armstrong Custer. 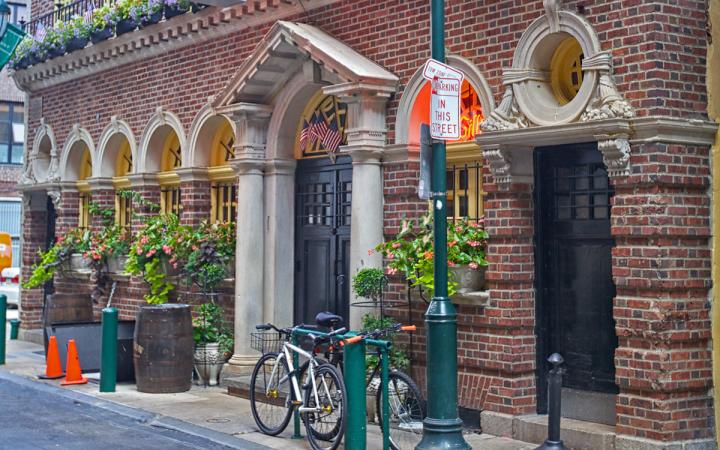 The oldest continuously operating tavern in Philadelphia survived the Civil War, Great Depression, and Prohibition. The original owners lived upstairs with their 13 children.

The Reges family has run this restaurant for 60 years, since attorney John Reges bought it in 1957 for his wife, Olympia. Since taking over management, their son Mark has made it a destination for dining out as well as weddings and catered events.

Has always remained in the same location and initially was connected to the city by about two miles of plank road. All guests are served a glass of clam juice as soon as they are seated.

Survived the 1906 earthquake, but the building burned down in 1907 and was rebuilt.

The walls are lined with more than 600 tap handles of beers that have been served across the years, including one of the original Jacob Wirth beers. The restaurant relocated across the street in 1871, and has been under the ownership of just two families.

Each table contains a handmade crock filled with peanut butter, a practice that dates to a shortage of butter during World War II.

In 1900, The Palace was destroyed by the Whiskey Row fire, but patrons managed to save the ornately carved 1880s Brunswick bar, which is still in use. 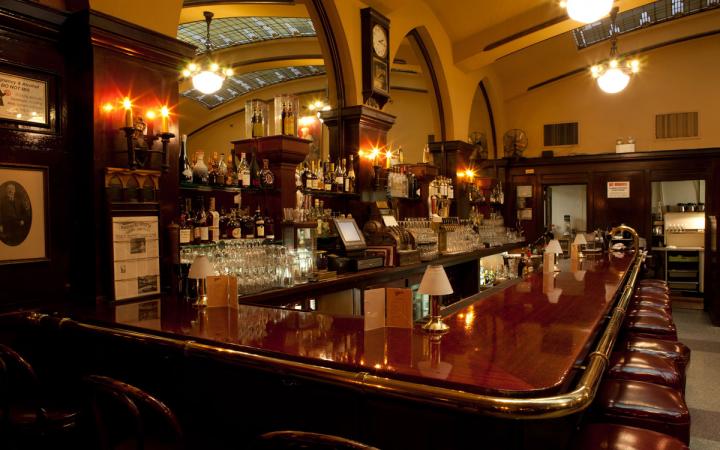 Numerous hunting trophies and stuffed animals decorate the walls at Sleder’s, and many patrons kiss a moose named Randolph for good luck.

Once a classic old boys’ club, it has a collection of more than 50,000 pipes and is known for its Mutton Chop, priced $52. In 1905 an actress, Lillie Langtry, petitioned the restaurant and won women the right to dine here.

The restaurant opened an espresso bar on the lower level to serve coffee, tea, snacks, and pastries.

A 1958 photo of the restaurant’s open kitchen and drop-down hood inspired “the Shoe’s” 2015 renovation. There’s no chef on staff, just lots of cooks.

Owner: The family of Sol Forman

Legend has it that after Peter Luger died, the steakhouse fell into disrepair and Sol Forman was the only person who showed up at the auction to bid on the restaurant. For the price of the real estate, Forman was able to acquire his favorite eatery in 1950. Since then, three generations of his family have led the steakhouse to widespread acclaim. 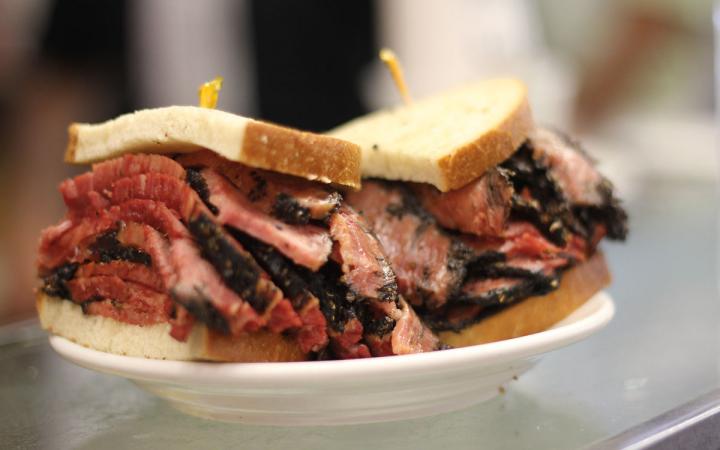 In New York City, Katz’s Deli is the “the one constant," says owner Jake Dell.

A New York City institution and the oldest deli in the city, it has stood in the same place for the past 100 years, since it was moved there due to construction of the city’s subway system. Now it serves up to 4,000 customers on busy days.

The Jewish deli opened its first outpost—at DeKalb Market Hall, in the heart of downtown Brooklyn—earlier this summer. The market will be a grab-and-go location, serving the restaurant’s top-selling dishes, says Jake Dell, who officially took over operation of the restaurant in 2009, but says he’s been working in it since the moment he was born.

In a city where everything changes, “we’re the one constant,” Dell says. The restaurant caters to regulars and tourists, many still coming thanks to the movie “When Harry Met Sally.” It has also grown its shipping business. Meats, mustard, pickles, and soups are all part of the shipping business, which launched during World War II when the owners’ sons were serving in the armed forces. The family sent food to them and developed the slogan “Send a salami to your boy in the army.”

Claims the oldest hand-carved bar in the U.S. 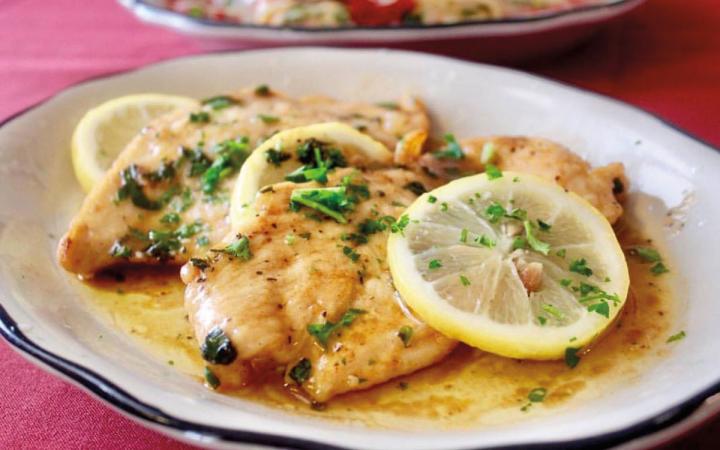 Roma Cafe claims to be the oldest Italian restaurant in Detroit.

Essential item: A pasta machine imported from Italy years ago.

Any person in charge of a classic restaurant understands the demands of the loyal guest. Janet Sossi Belcoure, owner of Detroit’s Roma Cafe, believes nostalgia goes a long way: Add a dish to the menu? Just make sure you don’t take anything off.

Three years ago, Roma Cafe hired a new chef, and people started complaining about the red sauce. “It wasn’t different,” she says. “The same people who had been making it forever were still here—but that just shows you how sensitive people are to change at a place they love.”

The Roma Cafe is a true institution in the Motor City. We’re talking 127 years of perfecting a type of cuisine that people never tire of. The venue, which calls itself Detroit’s oldest Italian restaurant, opened in 1890 after the Marazza family developed a culinary reputation at its boarding house. The business was sold to John Battaglia and Morris Sossi in 1918. Sossi’s nephew, Hector, began working as a busboy in 1940 and bought the restaurant in 1965. He held the reins for the next 50-plus years.

Belcoure, despite swearing to never enter the restaurant industry, has made sure Roma Cafe remained in the family. Her brief flirtation with a different career, by the way, ended 35 years ago.

“I have a master’s degree in guidance counseling,” she says, laughing. “But I ended up back in the business and have worked it with passion for the past 35 years.”

Around 15 years ago, she really took over the operation. Having the chance to work with her father, she says, allowed her to truly appreciate Roma Cafe for its nuances and its hold on the community. She has a server who has been here as long as she has. The chef, who just retired, manned the line for 33 years. Waiters last decades, not days.

“The great-grandchildren of people I served are coming in now,” she says. 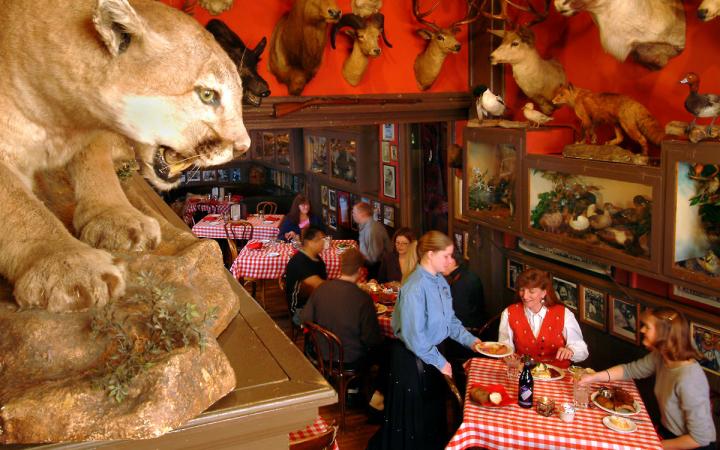 Renovations at The Buckhorn Exchange will double the size of the line and allow for more creativity.

Owners: William Dutton, general manager, and a group of investors

This restaurant survived Prohibition by opening a grocery in front, and legend says the owner hid bottles of alcohol in hollowed-out loaves of bread. Under the men’s room is a secret passageway through which guests escaped during Prohibition raids. Four presidents—Theodore Roosevelt, Dwight Eisenhower, Jimmy Carter, and Ronald Reagan—dined here, and not a lot has changed, according to general manager William Dutton. “We offer Old West hospitality and exotic meats,” Dutton explains.

However, there’s only so much the past can offer, and even Buckhorn has found it has to innovate. This year it will undergo a complete renovation of its “very old and very small” kitchen. “We don’t have a very exciting kitchen for the new crop of chefs, and recruiting has been hard,” Dutton explains. The renovation will double the size of the line and allow for more creativity. “We need to do this to make sure The Buckhorn Exchange is successful for the next 100 years.”

The entire building is in authentic German style. 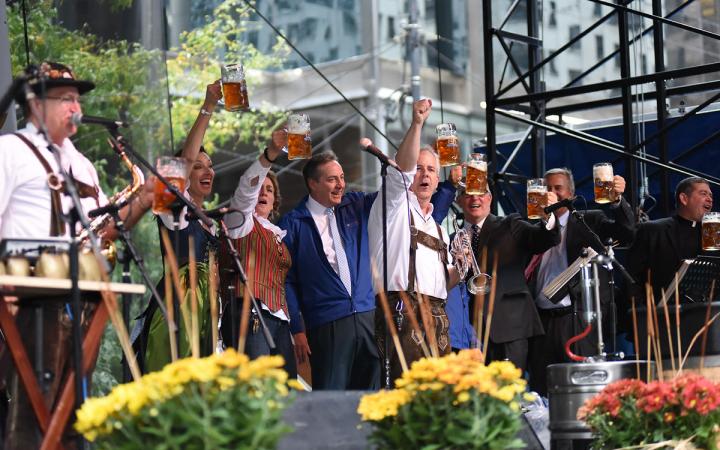 The Berghoff Restaurant calls itself "The Most Iconic Restaurant & Bar in Chicago."