In today’s market, restaurant groups might be the best way to rock the independent restaurant.

When Luke Dirks and Joshua McFadden created Submarine Hospitality in Portland, Oregon, in 2016, there wasn’t an existing group of restaurants they were building an umbrella brand for. Instead, the group came first.

McFadden already had one restaurant—Ava Gene’s. He and Dirks knew they wanted to create another, Tusk. They built Submarine Hospitality first, bought Ava Gene’s from McFadden’s former partner, and then opened Tusk, all between February and August of 2016. Now the group operates five concepts total and is planning something scalable in the future.

“I think everyone in our industry is kind of seeing that scalable concepts are important in a portfolio to stay financially solvent,” Dirks says. “It’s harder to make one-off, service-oriented restaurants pencil out financially.”

But with the power of Submarine Hospitality behind Ava Gene’s and Tusk, Dirks and McFadden had faith. Dirks started Submarine after serving as partner in Happy Cooking restaurant group in New York City. The experience informed what Submarine has become.

“One of the things that’s important if you’re going to do a multi-concept, multi-individual space restaurant group—it’s really important to not have it feel like a chain,” Dirks says. “Otherwise they’re all basically the same, [so] why are they named different names?”

For Submarine’s restaurants, there are three core values that each must embody, and when combined they give a feel that Dirks says creates a common thread. The first is sourcing and relationships with farmers, a founding tenet that began with Ava Gene’s when it was created in 2012. The slogan at Ava Gene’s is “locally sourced, aggressively seasonal.”

“Ava Gene’s is a little more expensive than other restaurants in Portland, but for us, there’s a great degree of value to be had there,” Dirks says. “Whether we’re doing a fast-casual concept or a super-expensive, fine-dining restaurant, we want it to be packed with a lot of value.”

The second core value is interior design, which Dirks says is more important in a restaurant group than folks might realize. Each restaurant needs to be different, and each experience needs to be unique.

“We believe restaurants are supposed to feel transportive,” he says. “It’s important you think you went somewhere and not just substituted eating out for eating at home. It’s aesthetic design and vibe. For us that’s about furniture and visuals, but also music curation, the way the lighting works, the way the sound quality is. We’re really trying to direct physical spaces as much as anything else.”

Third and perhaps most important if least unique is hospitality. Guests in Submarine restaurants should feel welcome, educated but not talked down to, and just have a great time.

“We try to hit the point of education and excellence,” Dirks says.

At Tusk, the first restaurant Submarine conceived and executed, the sweet spot was reached. Guests latched on to the concept immediately, Dirks says, and the press was far ahead. The buzz for Tusk was formidable, and awards shortly followed. But Dirks says all that buzz was a big lesson for the duo in building out a new concept. He says if he could do it again he’d have less buzz in the press and more financing in his pocket before making any promises about opening dates.

“We got a strong early buzz going, which was really exciting and fun and not to be taken for granted, but when we experienced a few months of construction delays, I think there was even a little bit of a feeling of negativity starting to creep up,” Dirks says. “Wait until you actually know when you’re going to open until you push the PR side of things. Raise a lot more money than you think you need to raise and give yourself the time you need to get it done.” 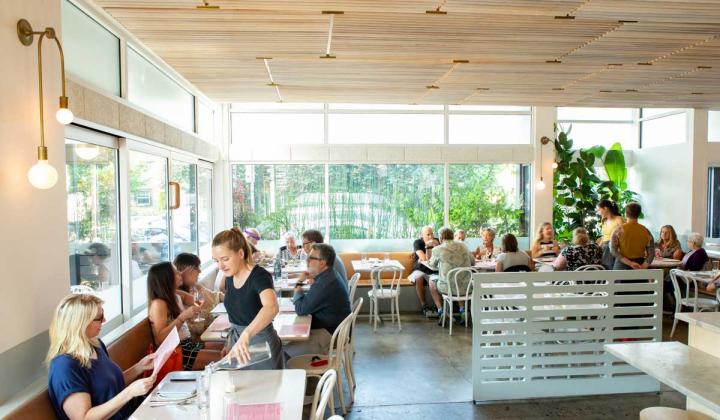 At Tusk, guests latched on to the concept immediately.

But since then, Submarine has had an additional partner in its new concepts. The Hoxton, a boutique hotel group, approached Dirks and McFadden when opening its second U.S. hotel and requested three concepts. Submarine operates the hotel restaurant, La Neta, a rooftop bar, Tope, and an alley cocktail bar known only by its location, 2 NW 5th.

Each concept has been a lesson and an opportunity and, looking to the future, Dirks and McFadden see more growth coming in spades thanks in most part to their leverage as a group.

“There’s safety in numbers, there’s some economies of scale when you have one office that’s managing the finance for two restaurants, and then you add a third—you’re not actually tripling the work, you’re using a lot of the same vendors and a lot of the same processes,” Dirks says.

This builds a powerful platform. In creating the menus within their Hoxton concepts, Submarine tapped Johnny Leach, a chef native to Portland who had spent time in New York City working under the famed Korean-American chef David Chang. Dirks says that Submarine provides the ability to elevate chefs whose work might not otherwise survive the way the market treats independent restaurants.

“Your average industry professional who is working at a restaurant, whether they’re a really talented bartender or a really talented server or sommelier, they don’t have access to the infrastructure that they would need to open a restaurant,” Dirks says. “Obviously the path forward there would be to just bootstrap it and slowly build your own concept and slowly raise money and figure out how to do the finances and HR and payroll. But I think a lot of restaurants fail because there’s no clear correlation between being a great restaurant industry professional and being a great backend business person.”

Folks in other restaurant groups put this theory into practice, too. At Sage Restaurant Group in Denver that power means efficiencies in the home office, purchasing power, and a seamless strategy throughout the system.

“We’re what I like to call a ragtag group of really competent professionals,” says Brent Berkowitz, chief operating officer at Sage. The group consists of six concepts, a few of which have started to scale. Urban Farmer, for example, has locations in Cleveland, Denver, Philadelphia, and Portland. But each location still makes a commitment to the local community, which guests demand, Berkowitz says.

That includes locally sourced food and wine on the menu. Cleveland guests want perogis. Denver guests want chili. While there are four Urban Farmer locations, only about 40 percent of the menu is replicated.

“If you work at Departure Portland, you work for Departure Portland, you don’t work for Sage Restaurant Group,” Berkowitz says. “We’re able to use what’s good out of both sides—as far as being a group, we have purchasing power. There are efficiencies at the home office—finance, marketing, HR. That’s where the group part really comes in and the ability to mesh everything together, but not for our guests, for our internal guests, which is our staff.”

“Because of our hotel purchasing, we have purchasing power through a vendor program and access to pricing at a much larger scale while still staying small,” he says. “From a business-to-business perspective, we’re a big company and there’s safety and confidence and trust that goes along with being a big company for 30 years. From a business-to-business perspective, there is this idea that we just really have strong ethos about operations and how we treat our guests and our teams.”

Having made big moves in hotel restaurant management and scalable concepts, Berkowitz says Sage is looking toward true indies as a big area for growth. The hotel partnerships has allowed Sage to take creative leaps, Berkowitz says. Now he’s imagining what those creative leaps can look like without the time that is tied up with in-room dining and other ancillary duties that come along with hotel hospitality.

“We’re very successful and bottom-lined focused so we’re ready to maybe try something on our own,” he says. “We think it would help our rate of growth.”

The Jump into Diversification

For some restaurateurs, though, one independent concept in this market doesn’t seem like a safe bet, or even an interesting one. While scalable fast-casual units seem to have been all the rage in recent years, Kyle Noonan has thus far only been interested in scalable full-service concepts. 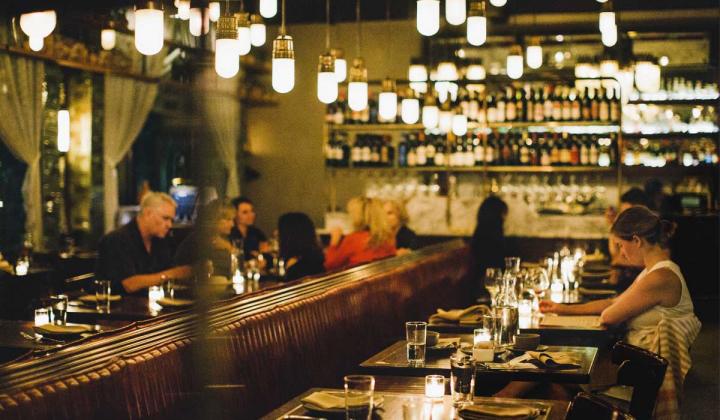 The slogan at Ava Gene’s is “locally sourced, aggressively seasonal.”

He launched FreeRange Concepts with his business partner Josh Sepkowitz in 2012. The duo of college besties put three out of four of their concepts on the market at the same time. It was a bold decision, but one that paid off.

“Frankly it was probably just sheer stupidity, or maybe just naivete, that you think you can just open a bunch of stuff and you don’t realize how hard it actually is to do,” Noonan says in hindsight. “But we knew once we were committed, we could make it happen.”

The duo launched their first three concepts in 11 months—and they weren’t just restaurants. FreeRange is an experiential brand. Each business included some sort of large venue—a bowling alley, a concert stage, or a dog park.

“I’m not going to say I would do it again,” Noonan says. “I wouldn’t advise anyone to do it in the way we did.”

Still, there are some things Noonan and Sepkowitz did that he would recommend, especially to those looking to grow in the market today. One of the biggest advantages to launching such a multifaceted set of concepts was the diversity. FreeRange’s main concepts are different enough that there’s something for everyone—which means some locations are always busy.

“The concepts kind of ultimately complement each other,” Noonan says. “When the weather is perfect and it’s 75 and sunny, Bowl & Barrel isn’t very busy; people don’t want to be inside. But Rustic or Mutts, which are great outdoor venues, they’re screaming busy during that time. Then the inverse is true when it’s raining. So from a complementary cashflow standpoint, that’s one of the benefits we have with multiple concepts.”

The FreeRange array has also helped Noonan understand the consumer better. The experiential concepts allow him to observe consumer traffic patterns and desire to give the team a better lens on where to go next. And it seems wherever these groups go, they’ll do so with the same powerful moves.

“We’re looking to have a diverse portfolio, from super-basic, fun fast casual, hotel management contracts, and then our own brand pillar restaurants like Ava Gene’s and Tusk,” says Dirks of Submarine. “And we’re trying to be more vertically integrated as a company.”