The fanfare of today’s farm-to-table movement all started with one woman in a small, one menu restaurant nearly 50 years ago.

It's a familiar comedic moment these days—the sharply dressed couple seated in a hip restaurant. One asks the server where the chicken on the menu was raised. The other asks how comfortable its life was, what it was fed, what its name was.

While restaurants aren’t going so far as to give these details of where a meal comes from, it is commonplace to see the name of the farm and even the name of the farmer. And while this trend has come mainstream thanks to consumer demand, there’s one person who is credited with starting that trend, and that person is Alice Waters.

When Waters started her restaurant Chez Panisse in Berkeley, California, in 1971, it was almost a happy accident. Waters says all she wanted to do was cook for her friends in a place that felt like home. Up until that time, Waters had been a Montessori teacher and left that job to follower her passion—cooking for friends.

“I naively thought that if I had a restaurant, that [guests] would pay and that would be a great way for me to make a living,” Waters says in hindsight. “I wanted it to feel like people were coming to my house, so we actually found a house that was commercially available for restaurant use and so that was kind of lucky that it was affordable in those days.”

And so Chez Panisse, the French-inspired, farm-to-table legend, was born. What’s now two restaurants in one—a café upstairs for casual dining and the original, fine-dining restaurant below—had humble beginnings. It started as just one floor and had only one menu, and everything was by design. It was meant to feel like the restaurants Waters had visited while living in Paris, where families ran the business and menus changed daily based on what farmers and fishers brought in.

“I wanted it to be this very unpretentious, informal place where I could feed people like I did at home,” she says. “That was the original intention. I don’t think it could have evolved if it hadn’t been in such contrast to the food culture that had emerged.”

What was the food culture at the time? Fast, easy, affordable—the pillars of American dining, some would say. But consumers today want more; they’ve come to expect local sourcing, transparency, authenticity, a sense of place. They want what Waters created. Looking back and knowing this and what an impact she’s made, Waters thinks she wouldn’t have done anything differently. And the one-menu practice she put in place in the beginning still endures.

“It’s an everyday challenge to change the menu so that it reflects the moment in time, the season, the ingredients that come in that day, the aliveness of the food,” she says. “It’s a challenge, but it’s something so interesting to me, so exciting, that honestly if the restaurant wasn’t vital anymore, if we got into a routine, then maybe it was time to close.” 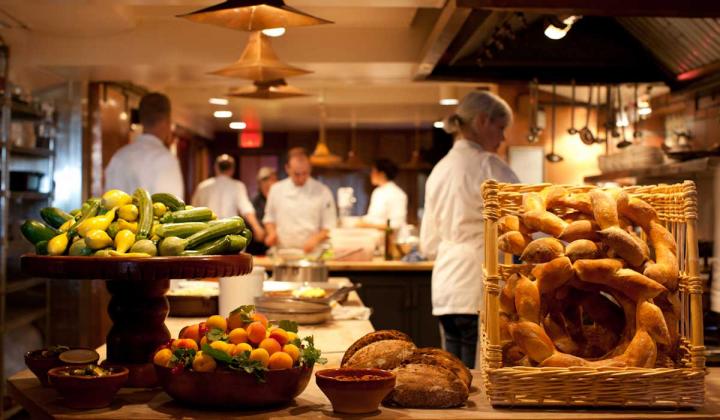 Chefs at Chez Panisse work three days and are paid for five. No one burns out, and many perspectives are welcomed before decisions are made.

But Chez Panisse hasn’t arrived at a place of stale routine yet after nearly 50 years. In that sense it has been and remains a testing ground for the farm-to-table movement. Waters is delighted, she says, when she sees so many other restaurants working with farmers and changing menus seasonally, if not daily, just like Chez Panisse.

“I was just in New York and—again, it’s about that moment in time that you’re eating that asparagus and maybe you had other vegetables prepared in that same manner, but right now it’s about asparagus and you just feel so connected to nature and where you are in time and place,” she says.

Time and place are integral to the restaurant template Waters has created. What’s more—texture, smell, sound. All of these, and the connection to nature, seem to stem from the training Waters received as a Montessori teacher. Maria Montessori, who originated the immersive teaching style, believed children learn through their senses. Waters believes restaurants should be sensory experiences, too.

The experience reaches from the dining room into the kitchen, where Waters has always encouraged guests to explore. The open kitchen is on display for view, and she often invites guests in for a chat and to show them how their meal has been prepared.

“I love sitting in the kitchen because it always feels like a ballet to me,” she says of the restaurant’s fluidity. “When someone needs help, the others just come in so graciously to help put a plate together. Whatever it is, if they need help upstairs, one of the people might go up and help on the line. They’re not tied to their position in a way that other restaurants work. And I think that is inspiring for the people that work there.”

The kitchen is another place where Waters’ revolution has taken place. In a restaurant that innovates throughout, labor practices have not been missed. Chefs at Chez Panisse work three days and are paid for five. No one burns out, and many perspectives are welcomed before decisions are made.

“There isn’t just her way of doing it; there’s his way; there’s that person’s. It’s like colleagues who are really communicating with each other about the way something could or should be done, and I’m part of that conversation, too, so we’re having six chefs instead of three and I’m always helping to pass information from upstairs to downstairs,” Waters says. “Now we have a system where we always have one person from the café who works for a period of time in the downstairs kitchen so those ideas are moving around and again, keeping the restaurant alive.”

Aliveness is at the core of the revolution Waters leads. She says when she first tasted wild strawberries in France, she was awakened—she came alive. It’s that transformative moment that delicious food can facilitate, and it’s what she seeks to spark in everyone with the hope that it will drive them to make more sustainable food choices both at home and in business.

When Waters became a mother 35 years ago, she says, the reality of the food system’s challenges became apparent to her. Everything seemed connected.

“We couldn’t be an island unto ourselves in Berkeley,” she says. “What was happening upstream was going to come downstream—what was going to happen in [my daughter’s] lifetime.”

Back to the Start

The gardens provide the school with food for the cafeterias and to fuel cooking classes. She calls it school-supported agriculture. It cuts out the middleman, she says. Through this program, she brings that awakening she experienced in France to Americans at a very young age. If Chez Panisse was the future of restaurants when she started it in 1971, Waters says she has to believe that the Edible Schoolyard is the future of the food system from here.

“I have to believe this is the future,” she says. “I think we can start in kindergarten. If they grow it and they cook it and they eat it, it doesn’t matter what it is. They’re opening their senses and learning about food and nature.”