Daniel Boulud signed on as Spyce’s culinary director and investor in the spring after four MIT engineering students approached him with the idea.

Inside the Rise of Restaurant Automation

People are an essential element of the hospitality business. Use smart machines, including robots, to augment what a restaurant can offer.
September 2018 Maggie Hennessy

The menu at Boston fast-casual spot Spyce Kitchen is rife with personal touches from head chef Sam Benson. The Lebanese chicken-and-lentil bowl reminds him of the smell of his mother toasting coriander to grind with cinnamon when he was a child. The former executive sous chef at New York’s Cafe Boulud also loves how the aroma of ras el hanout fills the restaurant whenever someone orders the chickpea- and tomato-based Moroccan bowl. He thought he’d coax the most flavor out of the spicy Latin bowl by braising the black beans with chilies, onions, garlic, and toasted spices.

But when customers walk up to a kiosk and select one of seven $7.50 grain- and vegetable-based bowls, they won’t see Benson or any other human frying up these carefully selected ingredients. Instead, a robotic chef with seven magnetically heated woks and finely tuned temperature and time sensors tosses and sears the ingredients and dumps them into compostable bowls to be garnished and delivered to the customer, all in less than three minutes. Hot water jets instantly scrub the woks clean before the next order is cooked.

Benson was recruited by fine-dining chef Daniel Boulud, who signed on as Spyce’s culinary director and investor this spring after four Massachusetts Institute of Technology engineering students approached him with the idea. There are humans on staff at Spyce, too—a GM, a guide who greets and assists customers, and a garde manager who garnishes bowls and passes them to customers, and helps the robot replenish ingredients. 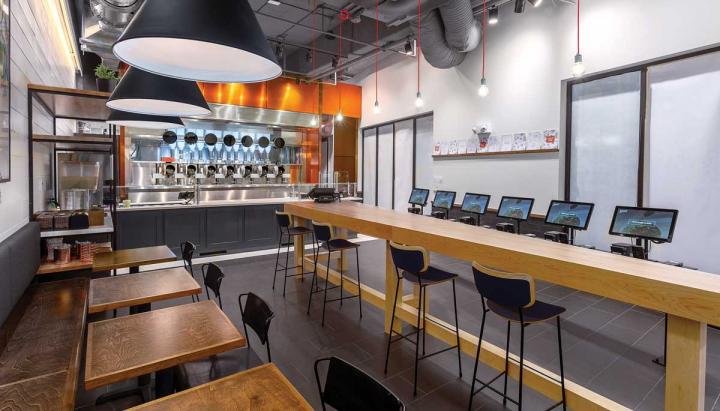 At Spyce Kitchen, a robotic chef with seven magnetically heated woks and finely tuned temperature and time sensors tosses and sears the ingredients and dumps them into compostable bowls.

“There’s a challenge with a lot of restaurants to improve efficiency,” says chief operating officer and one of the four founders, Kale Rogers. “We’ve taken the repetitive hot-cooking process, standardized it, and taken it out of the way to allow people to focus on hospitality—chatting with customers, adding finishing touches and handing the food to people with a smile. What we looked to optimize was the repetitive tasks we could do with a robot.”

Driving efficiency throughout the process (ingredients are prepped at a commissary beforehand) allows Spyce to staff strategically based on demand, Rogers says.

Then again, being a fast-casual concept, service jostles with speed, convenience and price more so than in a full-service setting.

“I think the concern [about robotics in restaurants] comes from this notion of trying to replace people in general,” he acknowledges. “For the customer experience and hospitality aspect, I hope that will never be taken away. We might be able to partially automate or improve the cooking side, but customer experience is something people are intrinsically so good at.”

“I recognize that there’s a lot of people that want to be first to do things,” says David Morton, co-owner of DMK Restaurants in Chicago, which employs 1,000 people across 10 concepts. His father Arnie Morton started Morton’s Restaurant Group. “Restaurants are very en vogue, there’s low barrier to entry—a lot like other bubbles of my lifetime, from real estate in the ’90s to tech in 2001. But I would caution operators about the dehumanization of restaurants through robotics. The industry has evolved, but it hasn’t fundamentally changed. It’s about people.” 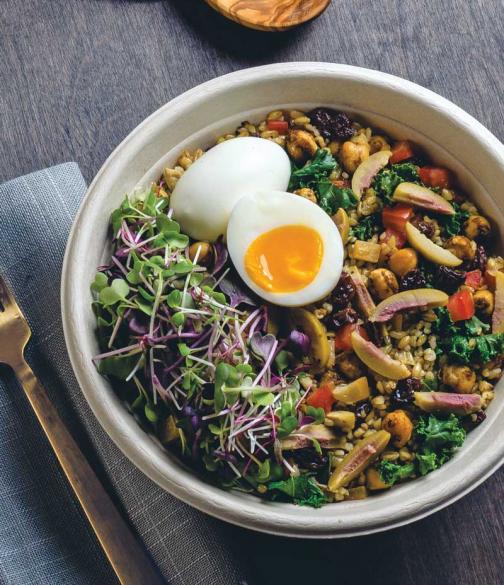 Restaurants using automation often cite customer satisfaction as the driving force behind automation, but the affordability of the technology and rising labor costs are undoubtedly contributing to the trend, too. In 2015, 14 cities and states approved $15 minimum wages—double the current federal minimum. According to U.S. Census Bureau data analyzed by Fortune magazine, 17 percent of Americans will live in a state or metro area with a $15 minimum wage in less than five years.

CEO John Ha, a former Google engineer, designed the robot after assuming ownership of a Korean restaurant in Milpitas, California, where he got a crash course in restaurant labor—filling in for dishwashers, cooks, and servers when someone called in sick or quit unexpectedly—and thought robotics could help.

The robot, which costs about a third of the salary of a minimum-wage employee per month, is designed to navigate a restaurant’s crowded, narrow pathways using only forward movement and sensors to avoid obstacles. Staff program the location of each table and the kitchen, and the robot makes itself a map of the restaurant. Servers use a tablet to summon the robot whenever food is ready, telling it where to go.

Like Rogers, Higueros stresses that it’s meant to assist, not replace, people. “This is meant to augment the people you have—make their jobs easier and take on routine things they do,” he says. “That way, the people you’re employing are more social and adding more value to your concept.”

Noting that customers don’t become regulars because of the robot, Higueros says servers actually benefit most from Penny—for the new skills they gain as much as the extra set of robotic hands. “They have their own assistant they’re managing,” Higueros says. “Once they start using it, it becomes a natural part of their workflow.”

Bear Robotics has a specific target customer in mind—casual-dining concepts with footprints of 2,500 square feet and above. 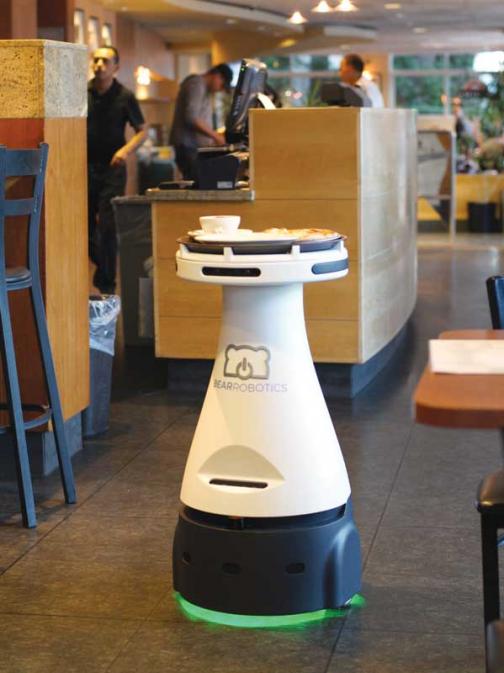 Penny, a robot that helps servers run food, costs a third of the salary of a minimum wage employee per month.

A boon for casual?

Indeed, the category has already widely embraced one form of automation: self-pay tablets, now mounted on tables at roughly 8,000 eateries nationwide—such as Chili’s, Olive Garden, and Outback Steakhouse. Not having to wait for servers can expedite the dining experience by six to nine minutes per table; plus, servers with customers using tablets see a 15 percent increase in tips, according to leading provider Ziosk. The lack of human interaction in the ordering process appears to encourage upselling, too. Ziosk competitor Buzztime claims that tables with its self-service POS system spend 21 percent more per check.

It’s not all good news, though. More customers are filling out the built-in customer satisfaction surveys, which are logged automatically and anonymously—the latter to the detriment of wait staff. More restaurant operators are using the data to assess job performance, making an already difficult working environment even more unfair, dredging up the sorts of personal attacks one might read from a long-winded, disgruntled Yelper.

Morton wouldn’t consider using self-pay tablets at any DMK restaurants, agreeing that they’re better suited to large casual-dining chains. DMK has found a place for automation, however, at Marshall’s Landing, the cafe, lounge, and eatery it opened in 2017 as part of Vornado Realty Trust’s redesign of the Merchandise Mart in Chicago. The sprawling second-floor space mainly serves employees of the massive, tech-forward commercial building.

“Vornado wanted something that didn’t feel like a traditional restaurant, more a center of gravity … where people could go and enjoy a meal or coffee with limited interruptions and maximum service,” Morton says. “So our challenge was, how do we make this as accessible as possible without being intrusive?”

The answer was Kallpods, or small, RFID-enabled call buttons created by New York design firm A+I that customers can push to summon a server or get their check. They’re situated on tables throughout the cafe and lounge, and a portion of the eatery. Pushing one prompts a special device on servers’ belts or in their aprons to vibrate and display the table number.

“There are so many group outings and one-on-one coffee meetings,” Morton says. “In that environment you want to feel taken care of without interrupting your conversation or presentation.”

“Then we found that guests, who always show us the way, actually preferred not to have them,” Morton says. Moreover, despite that Kallpods have optimized Marshall’s Landing staff and enabled servers to make more money, Morton stresses it was a one-time solution to a unique problem rather than a panacea.

“Restaurants aren’t just about putting food in front of the customer for the lowest cost possible to the business,” Morton says. “There are so many other inputs, including the culture of restaurants, training and development of people, and the art, very much so from a human standpoint. And culinary arts are thriving and will continue to.”

Automation isn't just about robot cooks and servers. Below are four automation innovations already in use at restaurants around the country.

Pay with Your Face

Brands like tech-centric holding company Cali Group are taking self-pay tablets a step further. Cali recently rolled out a face-based payment pilot program at its fast casual CaliBurger in Pasadena that enables customers to order, pay, log into their loyalty programs, and even reorder custom meals.

Building on the success of Coca-Cola's Freestyle machines, self-serving beer bars like Tapster in Chicago and Clouds Brewing in Durham, North Carolina, are jumping on the pour-your-own trend as a means to cut down on wait times and put control in the customer's hands. Customers pay by the ounce using an RFID-enabled card or wristband they purchase upon entering the bar.

Optimized staffing can save a restaurant thousands per month in labor costs and hours. Software providers like 7shifts analyze restaurants' historical scheduling data, then automatically schedule employees based on skill level, roles performed, and demand.

About 69 percent of consumers order food using online platforms, according to research from the Interactive Advertising Bureau and media platform Viggle. Various platforms support different levels of automation. Apps like Square Order enable customers to pre-order food and customize pickup times; online ordering sites with integrated payments like eHungry allow restaurants to decide how and when orders come in; while apps like Splick-it integrate with a restaurant's existing POS and support beacon-based ordering, email marketing, and existing loyalty programs.