Walk-On's Sports Bistreaux is the first partner on board. Expect more to follow.

The multi-concept operator out of Texas is feeding furloughed workers, and enabling restaurants across the country to do so as well.

Front Burner Restaurants CEO Randy Dewitt cried in the car on his way home. The day before, he furloughed 99 percent of hourly employees and many of his Texas-based company’s managers. Executives eliminated or cut paychecks. Restaurant managers lucky enough to stay on sliced salaries in half.

They did this so Front Burner’s seven restaurant brands could keep the doors open. Not just to serve curbside options and collect whatever revenue they could, but also to feed employees. Every furloughed worker in Front Burner’s system, now fractured by COVID-19 like so many other hospitality chains nationwide, is eligible for a free meal per day from the restaurant they just left. And the compensation cuts allowed Front Burner to also cover 100 percent of medical benefits for everybody, furloughed or reduced (the company paid about two-thirds before, depending on the plan). Additionally, Front Burner opened the tip pool from takeout to give back to furloughed employees.

Dewitt, who founded Twin Peaks in 2005 with Scott Gordon as well, hopes these steps will keep workers tethered to Front Burner throughout the crisis. It might inspire them to come back when it finally ends, if possible. Additionally, this was simply the most Front Burner could do, he says, given the massive drop in weekly sales (the best spots are doing 30 percent of typical business) and uncertain future facing restaurants.

And what bystanders overlook sometimes, Dewitt says, is that while restaurants are often considered a stepping-stone for people entering the workforce, they also serve a critical day-to-day function. For many, working at restaurants is a bankable way to get a meal each day. Front Burner didn’t want to lose sight of that.

However, there was one place the group came up short, Dewitt admits.

On March 20, a few days after Front Burner pivoted its restaurant fleet to takeout only, with a focus on meal kits, a small group of leadership met. Jordan Swim, the founder of Vestals Catering, who now runs the platform for Front Burner, told Dewitt his brand’s events had been cancelled. All of them. So he furloughed the staff and shut the doors.

“And I thought, what a terrible thing that is,” Dewitt says. “We took better care of our restaurant than we did the catering company.

“Then, I just had this bolt-of-lightning idea.” 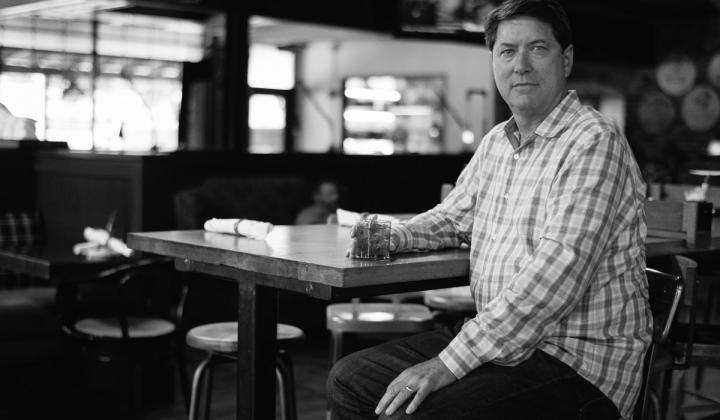 Randy Dewitt hopes to inspire restaurants to keep the doors open, if they can.

In the same spirit of its restaurants, Dewitt decided to create an entirely new concept and house it in the defunct catering venue. Only it would reopen as a spot designed solely to feed furloughed hospitality workers—laid-off restaurant professionals, regardless of employer.

Swim hopped on the phone with CitySquare, a Dallas nonprofit that provides affordable housing, and made arrangements to secure a 501(c)(3) status for “Furlough Kitchen.”

Dewitt donated money, as did some other company leaders. A Front Burner landlord put up $15,000. Over the course of the weekend, with help from his wife, a former PR professional, and two daughters, home from college, they came up a brand image, website, menu, operating hours, and interfaced it all with the charity. By Wednesday, Furlough Kitchen was open for business.

Dewitt, who estimates he’s concepted at least 15 brands over his career, says it typically takes a full year to devise a new restaurant at Front Burner, which also directs Legacy Hall. “This one happened in four days,” he says.

Furlough Kitchen allowed Front Burner to bring back the entire 10-person staff of Vestals Catering, too. They’re all taking a flat hourly fee, regardless of what they made before, and serving up to 1,000 ready-to-eat meals per day to local hospitality workers.

Front Burner bought a bunch of orange traffic cones from Home Depot and set up a make-shift drive-thru lane in front of the restaurant, located at 4318 Eastside Ave. in Dallas (formerly Vestals Catering), where people can pull up for a curbside handoff. Employees give out boxes and wear gloves. Front Burner asks people wear something with their company’s logo on it. But truly, it’s an honor system where nobody is getting turned away, Dewitt says.

As admirable and successful as this has been in the Dallas area, Front Burner is thinking bigger. Dewitt created a Dropbox of sorts with all Furlough Kitchen’s marketing materials. The look, feel, guidebook on how to run it, and so on. Almost, he says, like a franchise. Only this one is free.

The gated Dropbox allows Dewitt to screen interested parties and make sure they’re capable of bringing Furlough Kitchen to life. There’s already another group in the fold. 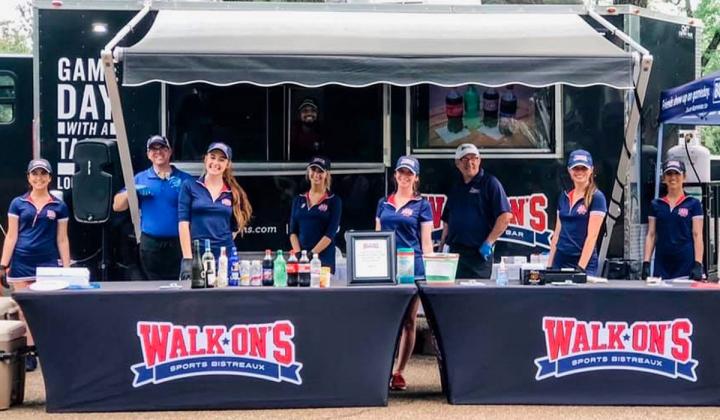 Walk-On’s plans to serve meals out of a food truck.

Walk-On’s Sports Bistreaux, an emerging concept out of Baton Rouge, Louisiana (read why Walk-On's was FSR's 2019 Breakout Brand of the Year), is set to open its own Furlough Kitchen this week. President and COO Scott Taylor connected with Dewitt and, just like the nonprofit’s birth itself, put together the program in a flash.

Walk-On’s plans to serve meals out of a food truck—a free Classic Burger with Cheese and Fries—to furloughed hospitality workers from 2 to 5 p.m. March 31 and then on April 2. It also sees 1,000 meals as the initial potential. “With help from donors, we have the ability to lessen the impact that COVID-19 has caused, one meal at a time. We are all in this together,” Taylor said in a statement.

Walk-On’s is the first partner for Front Burner’s Furlough Kitchen initiative. Dewitt doesn’t expect it to be the last. But, he adds, the company hopes it doesn’t get too big because it would signal the coronavirus crisis has gone on too long. “Our goal with expanding Furlough Kitchen is to, first of all, inspire other restaurant owners to reopen and feed people,” Dewitt says. “And if they choose to do so, use our collateral that we collected in our Dropbox to speed their ability to get open and raise the money through our charities.”

Past just donating money, some suppliers have linked with Front Burner to provide product. Beyond Meat called and now Furlough Kitchen offers a vegetarian option to hospitality workers.

Donations can be made at furloughkitchen.org and here.

Dewitt also pointed out Furlough Kitchen can’t take volunteers, unfortunately. Everyone who works there, he says, needs to be trained on Front Burner’s COVID-19 best practices. They can’t afford endangering current employees or guests by opening the door to outside help. What the concept needs right now isn’t time, but donations. And so far, it’s going well, Dewitt says.

Out of the gate, Furlough Kitchen had enough in the tank to provide prepared meals for at least 90 days. “We’re in great shape,” he says. “Money is trickling in. It looks like it’s going to be sustainable here locally. The goal right now is how do we inspire others and help them get open.”

A change in business

Dewitt says meal kits have really been the heart of Front Burner’s early COVID-19 strategy. The idea of giving guests the brand experience outside the four walls—something more than just providing food. Whiskey Cake’s Plano, Texas, location has offered a variety of survival kits. For example, the “So Fresh and So …” kit, which runs $60, includes a pound of flank steak with seasoning, a pound of ground beef, a whole marinated chicken, a pack of cherry tomatoes, a cucumber, red onion, two ears of corn, a pound of red potatoes with garlic and rosemary, a head of broccoli, two rolls of toilet paper, a gallon of milk, a pound of butter, and 15 eggs.

These options allow guests “to recreate that Whiskey Cake experience at home,” Dewitt says. Customers have loved it so far, and it keeps the brand in consumer’s minds as this crisis prolongs.

“Our customer base pick it up pretty fast,” Dewitt says. “And it’s safer than a grocery store. They get higher-quality food and they’re having fun with it.”

Dewitt hopes restaurants can make that latter point crystal in the coming weeks. “One thing I haven’t really seen happening in the consumer media is just the realization that using a restaurant curbside is safer than shopping in a grocery store,” he says. “I don’t think the average consumer is getting that pitch.”

9110 Forest Crossing
The Woodlands
TX
800-789-7655
Since 1989, AllianceHCM has worked with the unique needs of thousands of restaurant (more)
Find restaurant equipment and suppliers
Start Now!