Chef D. Brandon Walker and the Art of Doing Good

Early in his career, chef D. Brandon Walker (often known simply as “Chef D”) had a clear goal in mind: become the executive chef of a multi-starred, fine-dining restaurant. But his vision took a sharp 180 in the midst of intense, often toxic kitchen environments. “That’s the school I came up in,” Walker says. “And that was ultimately the school that burned me out.”

Changing tack, Walker became the executive chef of Bread and Roses Café, a restaurant serving and training people facing housing insecurity. (He often credits his 2013 “Chopped” victory to the unpredictable nature of this work.) 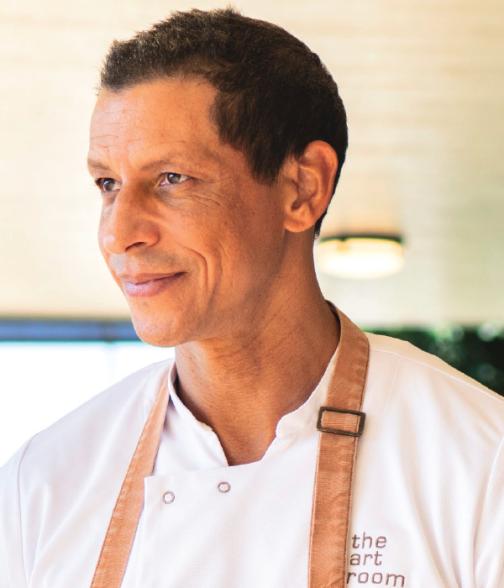 In 2016, Walker opened his first restaurant, The Mar Vista, an elevated yet relaxed full-service restaurant that eventually spawned a smaller quick serve, the Mar Vista Grab & Go. Both concepts work with the nonprofit St. Joseph Center to extend their hiring pool to historically overlooked candidates, including the formerly incarcerated, underhoused, and impoverished.

Walker has continued to refine this operating model, as evidenced by his newest concept, The Art Room, which just opened last month. The restaurant may be fast casual, but the ambiance echoes upscale establishments, with a mini art gallery, curated playlists, and a broad, chef-driven menu, from breakfast burritos to New York strip steak.

Walker, who got into his “fair share of trouble” as a young man, hopes he can help others overcome similar challenges through employment opportunities at The Art Room. “Cooking was certainly my pathway out of it, and I thought that it could work for others,” he says.

How is The Art Room different from other restaurants?

I opened my first restaurant, The Mar Vista, in 2017, but I was really interested in this intersection between social service and for-profit restaurant work. So I’ve kind of been tinkering on that ever since, and this is my latest iteration. I think—I hope—I’ve gotten it right this time around with The Art Room.

I think it’s really important to lead by example. I found the management style, at least in the back of the house, could be toxic at times; the criticism was not always constructive. I think people do better when they’re being nurtured and invested in as opposed to being treated as if they were interchangeable. So we stay away from overtime and try to keep our shifts somewhere between six and eight hours. I just feel like people do better when they have shorter days. The restaurant industry has been notorious for working people 10-12-14-16 hours.

It’s also very important to give people a clear path to promotion, to be elevated in the work structure and the pay structure, and to create that willingness. I think instilling willingness is the most important thing that we can do for staff. Willingness comes when you feel like you’re part of a team, when the higher-ups are willing to do the same work that they’re asking you to do.

What are the benefits in staff working every position?

I think it unlocks potential they might not even know they have, and it increases accountability and willingness—not to mention pay because we use a universal tipping system. Every person who’s on staff that day or that shift shares equally in the tips (except as the owner, I take none). Whether you were working the hotline or making espressos or working the cash register or running food to tables, everybody’s sharing equally. With universal tipping at my existing restaurant, Mar Vista Grab & Go, we’ve been able to elevate our hourly rate by $4 an hour. So somebody starting at $18 is actually walking away with $22 an hour.

How do you make this model financially feasible?

Cutting food costs, renegotiating the lease, and controlling that overhead are some ways that restaurant owners can put more money into payroll. Ultimately, the place is only as good as its staff. I think a lot of restaurateurs will agree with that statement.

I’m also getting away from a lot of the big purveyors and utilizing urban farming, which is another thing we’re very excited about. Not only are the fruits and vegetables fresher, we can also get them to the restaurant cheaper. Our partners over at Alma Backyard Farms are opening a new location. They’ve got four urban farms going on right now, and they’re being staffed by the same population that I’m working with, which is really cool.

Finally there’s the aspect of looking at a different type of candidate, going into communities that have not traditionally been in the restaurant industry and certainly not considered for management or front of house. But I think the timing may be right for change. Restaurants that are having trouble staffing post-COVID and the underemployed or unemployed that haven’t been invited into the restaurant industry—they can finally come together and be mutually beneficial.

Why don’t more restaurants hire from these communities?

I think there’s still a really strong stigma that comes along with folks that have been incarcerated for one reason or another. But when you really take a look at the candidates that I’ll be considering for my next ventures, these are people that come through really great programs. I’m partnering with social-service organizations that have already done a lot of the vetting and pre-screening for me, and they’re putting forth people that have already reached those benchmarks within the programs.

When you take a cursory overview of the idea, I think you might be missing that step; by the time somebody actually gets to you, you’re going to be dealing with a person that’s done a considerable amount of work on themselves and has really earned that opportunity.

What qualities do you look for in potential hires?

What I’m looking for is a real passion for food and wanting to make this a career. I don’t really need a ton of experience, and I think that you’ll find a lot of these folks have experience in very surprising and unexpected ways. They could have been working at their sober-living homes or at their rehab or while they were in prison. They could have grown up in a very strong cultural food scene. So you find these bits of experience that are not traditional but are just as useful.

Ultimately, it’s my philosophy that cooking is easier than we’ve made it out over the last 30 years. I believe there’s a culture that seeks to make cooking kind of inaccessible, like somehow you have to have magic powers to cook. I really want to dispel that; I want to bring it back to basics. Cooking is not that hard. You can get really beautiful, really delicious food without all the pretense.