Not Even COVID Could Stop Walk-On’s Remarkable Run

The Louisiana-themed brand plans to open 150 additional restaurants over the next five years.

Brandon Landry didn’t envision this. And either did his college professor. The first business plan for Walk-On’s, initially sketched on the back of a napkin, was returned with a C. Six banks rejected the idea.

“We were just trying to make a living,” Landry says. “Trying to open up one restaurant and hopefully pay the bills.”

On Monday, March 22, Walk-On’s Sports Bistreaux debuted its 50th location in Viera, Florida. The improbable nature of Walk-On’s 18-year journey isn’t lost on Landry, a former LSU basketball “walk-on” who developed the idea with teammate Jack Warner, who has since moved on to other ventures.

And the fact No. 50 arrived in the shadow of COVID-19 isn’t understated, either.

Walk-On’s came into 2020 as one of the country’s hottest full-service concepts. A month before the New Year, it adjusted branding ahead of what promised to be a significant growth spurt. The chain dropped “bar” from its name and embraced a fresh category—Sports Bistreaux. The idea, essentially, was to separate from the “bar” image—something brought to light as Walk-On’s attempted to partner with local businesses and community organizations. Namely, it signed a five-year “Tiger Partnership” with LSU to become the school’s official sports restaurant. LSU, however, asked for the “bar” to come out. And so Walk-On’s, which once beat 5,000 nominations to secure ESPN’s honor as the “Best Sports Bar in North America,” began to picture its image long-term. Not just what it stood for, but how new guests would perceive it as it landed in fresh cities across the country.

Just five or so years ago—in the summer of 2016—there were only eight Louisiana locations. By the end of 2017, there were 16 total, with Texas as the first new-market entry. Eight were added in 2018 to bring the footprint to 24. Nine came on board the following year. Walk-On’s approached 2020 and its soon-arriving COVID storm as a 33-unit brand with plans to debut 20–25 restaurants, backed by a pipeline roughly 155 units deep.

Like chains across all sectors, though, the pandemic stymied development and pushed some projects into the following calendar. As March’s 50th opening reflected, however, COVID stalled Walk-On’s—it hardly stopped it. By the end of this month, with a Fort Smith, Arkansas, venue opening March 29, Walk-On’s will have 51 restaurants, or net growth of 18 since the beginning of last year (10 opened in 2020).

And the brand’s targets are back on track. It expects to open upward of 25 restaurants this year, and is holding steady on its broader view of 150 additional venues over the next five.

About six months ago, another unlikely milestone arrived. Landry says Walk-On’s wasn’t actively seeking a private-equity deal—heck, it was the middle of a pandemic—when 10 Point Capital came knocking. 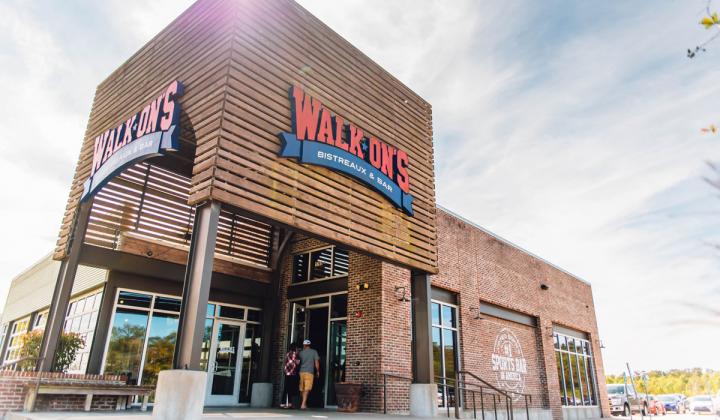 Store design and agility will play a lead role in future growth for Walk-On's.

The firm, known for its efforts with Tropical Smoothie Café and Slim Chickens, has long run by the mantra of helping “founders create dominant brands.” And managing partner Tom Wells saw that in Landry.

“We believe Walk-On’s is the future of the casual-dining segment,” Wells said.

The deal arose from a friendship Wells and his partner, Scott Pressly, developed with Landry over the past three years.

For some perspective, Tropical Smoothie opened 99 restaurants in 2020, signed 254 new franchise agreements—70 of which came from existing franchisees—and is on track to eclipse the 1,000-unit mark in 2021. The top 50 percent of operators boast AUVs north of $982,000.

Slim Chickens, meanwhile, closed last year having signed 150 multi-unit agreements with 15 groups and expects to open more than 50 restaurants in 2021. The 116-unit brand grew its franchise system 30 percent as it opened 15 stores during the crisis stretch.

Today, just four of Walk-On’s 50 restaurants are corporate. And the goal moving forward is to scale via franchising. So this mettle 10 Point Capital brings to the table isn’t anything to undervalue.

“For us, it was a strategic play,” Landry says. “I never wanted to get down the road and say, ‘man, I wish I would have.’”

Landry admits one of his strengths as a founder-owner is knowing when to surround himself with “great people,” like president Scott Taylor, who joined 11 years ago when Walk-On’s had just five corporate employees, including its two founders. 10 Point Capital was like that in a way.

The company might not have experience in the sports-grill-bar category, but it surely understands the nature of growing franchises.

“We’re looking at development. We’re looking at all types of different things that they’ve been there and done that with other companies,” Landry says. “So, for us, it’s awesome to sit there and pick their brain.”

And it’s doing so with some COVID lessons in tow. 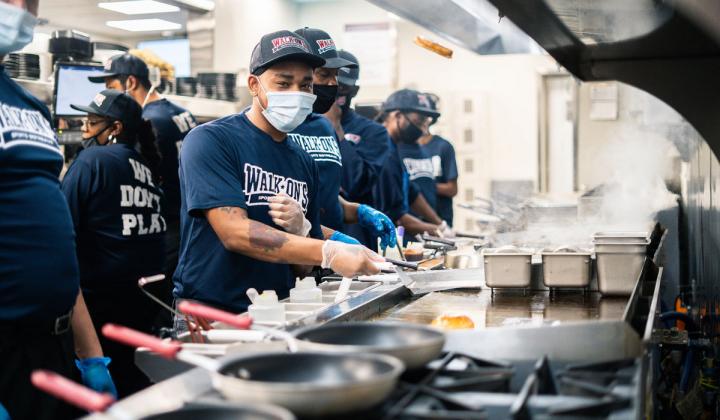 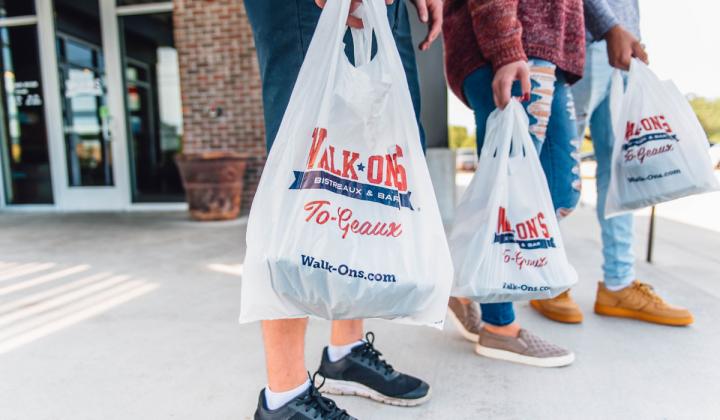 Walk-On's to-go business is sticking about twice as high as before, even with reopenings.

Walk-On’s began the pandemic by suspending royalties for franchisees. The company suggested operators pour those funds, if possible, into homegrown efforts and support for team members.

It then partnered with Front Burner Restaurants (now FB Society) on a Furlough Kitchen program that allowed restaurants to feed hospitality workers struggling from shutdowns. Walk-On’s took food trucks and cooking equipment wherever it could, Landry says. The non-profit movement has served more than 30,000 meals across five states. Walk-On’s also pledged $100,000 to the Barstool Fund in hopes of helping small businesses and other restaurants.

These revenue streams allowed Walk-On’s to claw back. The brand ran 60–70 percent of normal business just on off-premises alone. And takeout has remained roughly twice pre-COVID levels as indoor capacity limits came back.

“They don’t teach global pandemics in restaurant 101 or your business class in college,” Landry says. “You kind of just have to figure it out on the go.”

“But yeah, we went curbside right away,” he adds. “We tried to get monitors in all of the restaurants as soon as we could. We had to learn on the go. We had months and months of training. And I think customers and our guests appreciated that. That, OK, this is something new and it may not be perfect right off the bat. But they understood we were trying to help, and get some sales and get some people meals.”

Naturally, it’s been a market-by-market dynamic. Texas and Florida bounced back quicker, for instance.

No. 1, casual dining is not going anywhere. If anything, these past months proved its resiliency, Landry says. “Even when dining rooms got opened 25, 30, 50 percent back a couple of months into the pandemic, people were just like, man, I want to go sit down and get waited on and order a drink and get somebody to bring me food.”

Secondly, Walk-On’s asked itself something many restaurants today are questioning—can it shrink builds? The brand saw an opportunity out of crisis performance. There were restaurants opening at 50 percent capacity doing nearly as much sales as full units pre-COVID. “And so, we got a lot more efficient,” Landry says.

It was actually more like 6,800 until a Tampa-area franchisee suggested they add a dedicated take-out entrance with a waiting area. This smaller design, however, should allow Walk-On’s to capitalize on second-generation spots as they pop up from COVID-related closures.

This past December, Walk-On’s announced a partnership with Aramark to open its first non-traditional location. It’s expected to anchor the “Purdue Marketplace” on the university’s West Lafayette campus. Construction began in the fall and should finish by January 2022.

The restaurant will be 4,800 square feet and offer a pared-down menu focused on favorites, like Boom Boom Shrimp PoBoys and Duck and Andouille Gumbo, with a full bar.

The deal came to place, in part, thanks to Drew Brees, a Walk-On’s co-owner and the recently retired quarterback of the New Orleans Saints, who attended Purdue University.

“This is a new world for us,” Landry says of nontraditional development. “This will be the first time we’ve ever done this. But we’re excited about the opportunity and it may open up opportunities at other places. Maybe airports. Maybe other universities. Getting in with Aramark was a big deal for us.” 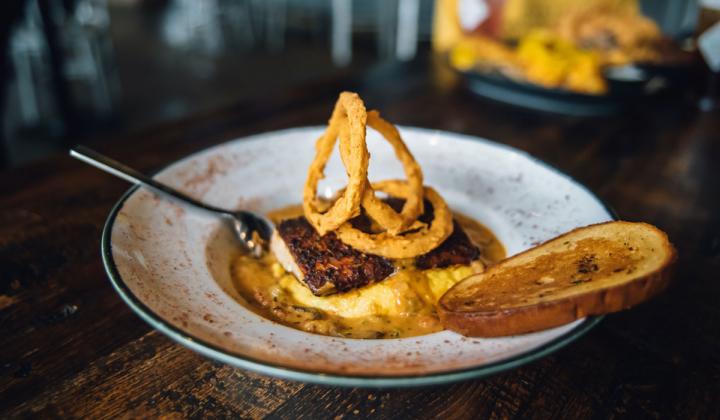 Walk-On's food has been a differentiator from day one.

Speaking of Brees, he invested in Walk-On’s, along with his wife, Brittany, back in May 2015. Despite being a Jimmy John’s franchisee, and the whole football thing and all, he’s remained an active part of Walk-On’s. After Brees announced his retirement March 14, Landry says they exchanged texts. “I can tell you, he’s going to be a lot more involved now. Our team is excited about that,” he says.

As Walk-On’s prepares for its post-pandemic act and beyond, Landry doesn’t plan to get too far from the company’s center. There are a lot of sports-themed concepts in America. And anybody can drop in and try to replicate Walk-On’s Louisiana-inspired recipes. Or its design. Put more beers on tap. Or hang twice as many TVs on the wall.

“But you can’t come in and steal someone’s culture,” Landry says.

If anything, this past year only reinforced the company’s “WOW” or “Walk-On’s Way,” he says.

“Culture is scalable,” Landry says. “But it’s not easy. You have to invest in it. And the day you stop investing in it is the day it can go the other way. And so it starts with us—it starts here at the top. But it lives from the bottom up.”

Walk-On’s fosters a strategy from author Jim Collins called, “The Hedgehog Concept.” Taylor explained this to FSR last year. It’s a concept that flows from understanding about the intersection of three circles: What are you deeply passionate about; what you can be the best in the world at; and what best drives your economic or resource engine.

Walk-On’s even formed a “hedgehog committee” made up of hourly team members and store managers who met with executives. Before a new menu rollout or decision, the conversation flowed up and down the ladder.

“We’ve doubled down over the time of the pandemic,” Landry says.

Yet while the food might be something competitors can attempt to mirror, it’s unlikely they will. At least in this space. Walk-On’s is more than 70 percent food to alcohol sales, which is hardly typical for sports bar brands.

“That’s something we’re proud of and that’s a big point of differentiation for us as we’re growing throughout the country,” Landry says. “Typically, sports bars aren’t known for their food. And we’ve kind of broken the mold on that.”