Despite myriad hurdles, culinary schools, like the restaurant industry, are adapting to keep class in session.

Culinary Education in the Age of COVID

Culinary schools face the challenges of both restaurants and higher-education institutions, but they are finding creative ways to adapt and bolster their coursework.

All industries and sectors have faced adversity during the pandemic, but a few have been so greatly impacted that their modus operandi may never look the same. This camp includes foodservice as well as higher education, so when it comes to the realm of culinary schools, the difficulties are doubled.

“The impact was sudden; it has, and will have, a lasting impact on higher education,” says Susan Marshall, interim dean at Johnson & Wales University, based in Providence, Rhode Island, with multiple campuses across the U.S.

CHECK OUT THE 18 BEST CULINARY SCHOOLS IN AMERICA

Like most post-secondary institutions, culinary colleges are grappling with on-campus considerations like housing, dining, and in-person classes. And though many of these programs had already adopted distance-based education options for specialties like restaurant management, nutrition, and culinary science, the heart of culinary school remains grounded in hands-on, tactile training.

Externships are also a common requirement, but at a time when restaurants can barely keep their permanent staff employed, bringing students into the mix is a near-impossible ask.

Despite myriad hurdles, culinary schools, like the restaurant industry, are adapting to keep class in session.

In mid-March, Johnson & Wales’ four campuses closed. The school quickly translated its non-lab courses, including culinary science, culinary nutrition, and beverage lab, into virtual programs. As for hands-on classes like food production, culinary arts, and baking and pastry arts, the university leadership and faculty laid the groundwork in the spring so it could reopen in the summer. From July 6 to August 14, students returned to their respective campuses to complete in-person lab courses. 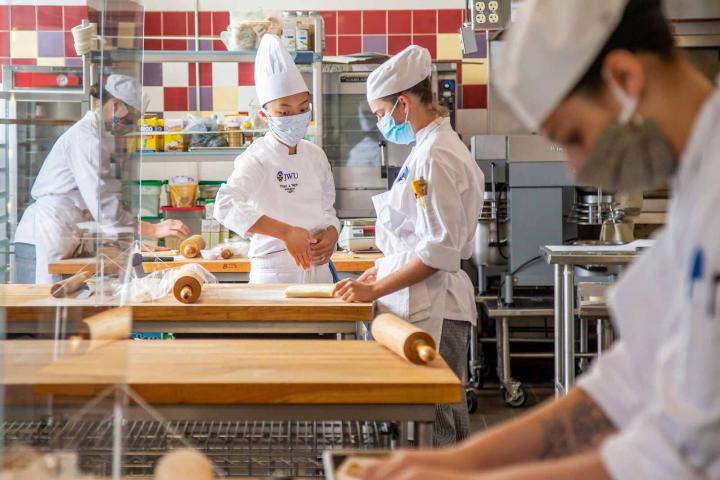 The success of this six-week period paved the way for the fall semester—but that’s not to say the summer session was a pilot program. Leadership carefully crafted a strategy that not only coordinated thousands of students, but also adhered to state and local ordinances at each location. “This was not a dry run; it’s the real thing,” Marshall says of the July 6 reopening.

The undergraduate fall semester began August 31, albeit with stringent restrictions in place. Prior to returning to campus, students, faculty, and staff had to complete coronavirus-specific virtual training, and those returning from current hotspots were required to self-quarantine for 14 days. Around campus, plexiglass barriers were installed in culinary labs and reception areas, while on-campus dining halls have, like restaurants, transitioned to grab-and-go meals.

Like Johnson & Wales, the Culinary Institute of America (CIA) has enacted a multipronged plan—one that would work across its campuses in Hyde Park, New York; St. Helena, California; San Antonio, Texas; and Singapore.

“There are significant logistical details that we have worked out—and continue to work out—in terms of managing campus density through phasing of student arrivals, balancing a combination of online and hands-on instructions, and creating additional protocols and contingency plans,” says provost Mark Erickson at the CIA.

“The restaurant and hospitality industries will be a vital part of our country’s return to normalcy, and now, more than ever, will need highly trained individuals to lead the charge.”

On March 13, all four campuses suspended classes while the administration hurried to bring study-abroad students back to the U.S. Exactly one month later, the school resumed the spring semester through online classes, at least for coursework that didn’t require labs or in-person work. The transition was more seamless than it would have been a mere five years ago.

“Fortunately, the CIA had introduced a predominantly online master’s degree program two years ago, so we had the infrastructure in place to quickly move the lecture and theory portions of our undergraduate curriculum online,” Erickson says.

Students returned to the Napa and Texas campuses in mid-June, but the school’s New York headquarters had to delay until late summer due to state regulations. At press time, the fall semester was slated to begin systemwide on September 8.

In anticipation, the CIA has stocked up with face masks and shields. It’s reinforcing social distancing by reducing seats and eliminating self-serve in dining rooms, installing sanitation stations throughout campus, and marking 6-foot intervals for queuing and in kitchens. Erickson also says the CIA is fortunate in that most of its kitchens are large enough to accommodate 6-foot buffers. 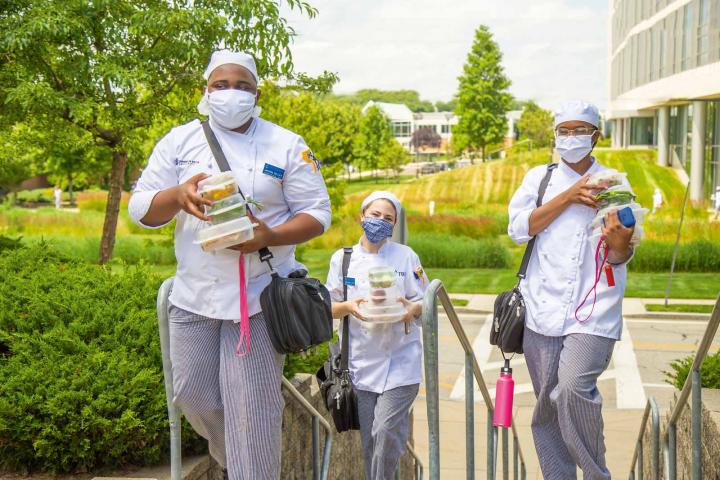 Beyond adaptation, COVID-19 has spurred fresh ideas in culinary education. Though established in 2013, New Orleans Culinary & Hospitality Institute (NOCHI) didn’t open its doors to students until January 2019, so the operation was barely a year in before it was forced to pivot.

“We’re fortunate to be a resilient startup in New Orleans—one of the country’s most resilient cities,” says NOCHI executive director Leah Sarris. “We’re accustomed to change and adaptation.” The nonprofit school moved its accelerated, vocational-style curriculum to the digital realm when the pandemic struck while simultaneously preparing for the school’s eventual reopening.

NOCHI also expanded its programming to include an online educational program designed for existing operators and staff rather than students. HOSP, which stands for Hospitality Operators, Staff, and Patrons, is a multi-component program to help restaurants incorporate the best practices into their business models and prepare for reopening. In light of circumstances, HOSP is flexibly priced with suggested donations of $6–$10 per person depending on the size of the operation in question.

Similarly, the CIA embraced educational components specific to the coronavirus era. The school closed its campuses to the general public, including its on-site restaurants, save for one. In San Antonio, upscale concept Savor, which typically specializes in Latin American cuisine, changed tack in early July to offer curbside a la carte dishes, family packs, and cook-at-home meal kits at competitive price points.

Given the seismic changes rippling through the industry, learning how to adopt an elevated, full-service menu and operation to an off-premises one will be an invaluable tool in any restaurateur’s arsenal.

“We’ve seen some extraordinary nimbleness in our industry the past few months,” Erickson says. “The restaurant and hospitality industries will be a vital part of our country’s return to normalcy, and now, more than ever, will need highly trained individuals to lead the charge.”