Walk-On's is creating multiple formats to help franchisees enter markets of all sizes.

By the end of next year, the NextGen Casual will have opened its smallest ground-up design ever in Central, Louisiana.

One of the few benefits Walk-On’s gathered from COVID is understanding its business model from a different perspective, says president and CEO Scott Taylor.

When restaurants shut down, sales immediately dropped 93 percent, with to-go and delivery being the only source of income. As dining rooms were able to open again, a handful operated at 50 percent capacity. Despite that, stores were still setting opening-week sales records. The thought crossed everyone’s mind—maybe the concept doesn’t need 280 seats and that much stress on the kitchen. Perhaps throughput could be faster and, in response, table turns.

“The other part is just looking at the increased costs of everything right now from steel to lumber to utilities for an open business,” Taylor says. “Everything's gone up, like commodities on your food. So we needed to take some dollars out of this cost of our building.”

From these discussions came the 7,000-square-foot, 200-seat Bulldog prototype, slimmer than Generation One’s 8,200-square-foot design. Development actually began before COVID arrived, but everything Walk-On’s discovered about obtaining similar volumes with less seats accelerated the process. The first one debuted in Lakeland, Florida, in 2021. Several more have opened since.

However, Walk-On’s found an opportunity to go even smaller by asking more questions—what’s important to keep in the design and what are things you’d like to have, but maybe don’t get credit for with the customer? Taylor says it was about thinking outside the box and creating something that was “sufficient, looks good, represents the brand in a clean and classy way, and takes 20–30 percent out of costs.”

So Walk-On’s introduced the Wildcat, a 6,000-square-foot design that removes about 400 square feet out of the kitchen and 600 square feet from the front of house, in comparison to the Bulldog. That includes fewer seats and a reduction in table sizes. The footprint of the bar is smaller as well. Instead of it being at the center of the restaurant, it shifts to the right side and seating moves from about 40 to 25. Walk-On’s believes that in this smaller space, it can execute the same experience and menu and more than $5 million in AUV.

The restaurant, which will be based in Central, Louisiana, is in the final design stage. Construction should start in February, and the store should debut sometime between September and December. Originally, the unit was going to be a corporate location, but DMBC—Walk-On’s largest franchisee with 16 open across Louisiana, Mississippi, Alabama, Florida, and Tennessee—volunteered to take on the task.

“We were going to build it, operate it, and think on all the burden of building a first-time prototype because there's always going to be something,” Taylor says. “You think you've got everything covered, but you're going to find something and so we were going to do that. But we have a tremendous relationship with DMBC.”

Walk-On’s has four basic ground-up prototypes. Generation One accounts for most of the footprint—Taylor estimates it to be around 60 percent. There’s also another big version called IDA, but there are only three of those in the system. The other two, of course, are the Bulldog and Wildcat. There are also some spinoffs. For instance, there’s a Pony prototype, which is just the Bulldog without a banquet room. 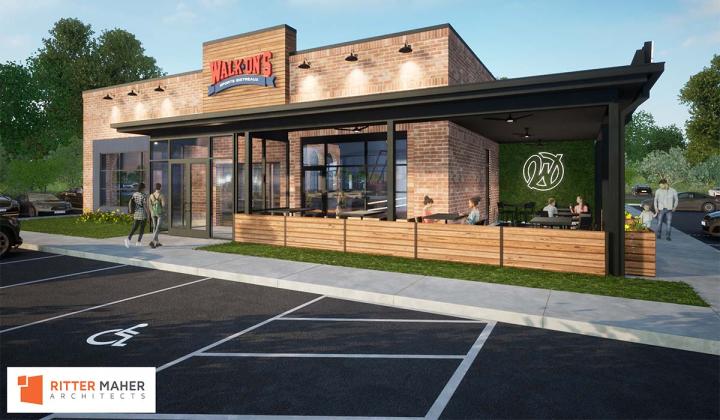 “We just need to focus on being better,” says Scott Taylor, president and CEO of Walk-On's. “Either get better, get worse. Nobody stays the same. We just want to get better every day. And so that's set for us. But innovation—that's what's happening here.”

These smaller designs take into account that Walk-On’s now does 15-16 percent off-premises, with some stores surpassing 20 percent. Taylor says those numbers should elevate in the new year after the chain rolls out a massive technology suite update, including a new online ordering platform, loyalty program, website design, and POS system. And within these prototypes, Walk-On’s will be more mindful of to-go and delivery, like a separate entrance so the off-premises guest doesn’t disturb the dine-in consumer checking in with the host.

Franchisees are still building Generation One stores, and Walk-On’s agrees with those decisions because sometimes a bigger box is necessary in certain markets, Taylor says. Looking at the overall picture, the concept wants to give franchisees a suite of options for wherever they may want to grow. Sometimes, that may mean entering a smaller market that can hold a Walk-On’s, but not necessarily at $5 million AUV. The chain recently opened in Clemson, South Carolina, after converting from a 5,500-square-foot historic theater. The location can seat up to 130 and features a patio. Taylor says a 5,000-square-foot Walk-On’s is possible too after refining the menu and streamlining prep areas in the back of house. It would be a better fit for a market with fewer than 70,000 people.

“There are options because we will always have Gen Ones out there, we're going to have some Bulldogs,” Taylor says. “It's just giving the franchisees and us different ways to look at different markets and develop, but also cast a much wider net so we can go into some of these much smaller markets that we think are great markets for us, but probably don't justify the investment of a big freestanding building.”

Walk-On’s has 70-plus restaurants across 14 states. That’s after opening more than 40 locations between 2020 and 2022. Taylor attributes growth success to servicing franchisees as soon as the pandemic began. Operators then saw how quickly stores were able to claw back sales, and confidence soared. The chain also used COVID to take advantage of real estate opportunities; stores were converted from TGI Fridays, Romano's Macaroni Grill, Tilted Kilt, Twin Peaks, Houlihan’s, and more. Even with the new Wildcat prototype, Taylor says Walk-On’s will continue to seek second-generation spots—anything that allows for franchisees to experience better unit-level economics.

The company will finish 2022 with 16 store openings, and that’s after a tough year from supply chain and sourcing equipment. But Walk-On’s learned from those trials and is now ordering far in advance.

In 2023, the plan is to debut 20 restaurants. Beyond that, the goal is to set a pace of 20-25 new locations per year. At the same time, Taylor and his fellow leaders constantly preach for everyone not to get caught up in the headlines and triumphs. Taking on the hard-working spirit of a walk-on athlete is what got the restaurant here, and no one wants to lose that fire. He wants team members to be proud of their wins, but also recognize that innovation never ends.

“We just need to focus on being better,” Taylor says. “Either get better, get worse. Nobody stays the same. We just want to get better every day. And so that's set for us. But innovation—that's what's happening here.”