Tupelo Honey hangs its hat on elevated Southern staples like Shrimp and Grits.

Along the way to growth, the NextGen casual brand hasn’t lost sight of who it is or what its customers want.

Tupelo Honey chief operating officer Caroline Skinner is watching a movement unfold. Perhaps driven by the pandemic, or simply uncovered by it, full-service consumers aren’t shy about what they want from restaurants. They expect brands to wear sourcing and ethos on their sleeves, to treat employees with care and serve food they feel good about—and do it all in a box that doesn’t look like it was designed in a lab.

The good news is this is who Tupelo Honey has always been, Skinner says. Founded 22 years ago in Asheville, North Carolina, the Southern-centric brand has spread to 18 locations with three fresh markets on deck for this year (Indiana, Iowa, and Ohio). In fact, ever since current owner Steve Frabitore acquired Tupelo Honey in 2008 when it had two stores (it was founded by Sharon Schott), the concept webbed out instead of sticking to concentric growth. In addition to its home state, Tupelo has restaurants in Colorado, Georgia, Idaho, Michigan, Ohio, Pennsylvania, South Carolina, Tennessee, Texas, Virginia, and Wisconsin. And seven of those have only one location.

That speaks to both Tupelo Honey’s runway as well as the stakes with every opening. “As we’ve expanded,” Skinner says, “we’ve wanted to hold true to that food integrity, brand integrity, and also the spirit of individuality that’s unique to Asheville.”

Skinner says casual restaurants of yesterday were a status symbol for diners. Now, it’s about self-expression and values.

Tupelo Honey guards that personality throughout its supply chain, employee care, and approach to food. It purposely designs large prep kitchens so chefs can make everything fresh—four-time James Beard Award semifinalist chef Eric Gabrynowicz is the brand’s vice president of culinary and corporate executive chef. Purveyors are highlighted in-store and online. Tupelo Honey describes items on its menu as Forever Free, a way to explain that the majority of its proteins were raised without antibiotics or hormones.

“We use the term ‘responsibly sourced’ because as we grow, we try to have aspects of local sourced,” Skinner says. “But more important than that is we’re able to have integrity behind the vendors. And sometimes it’ll be a single purveyor that is able to accommodate the needs of our company across 18 locations. Sometimes, they may have a regional emphasis and then we can work with them in a few markets. … It carries down the supply chain when you’re doing good and you’re working with people who have integrity with their business, you can share in that journey together.” 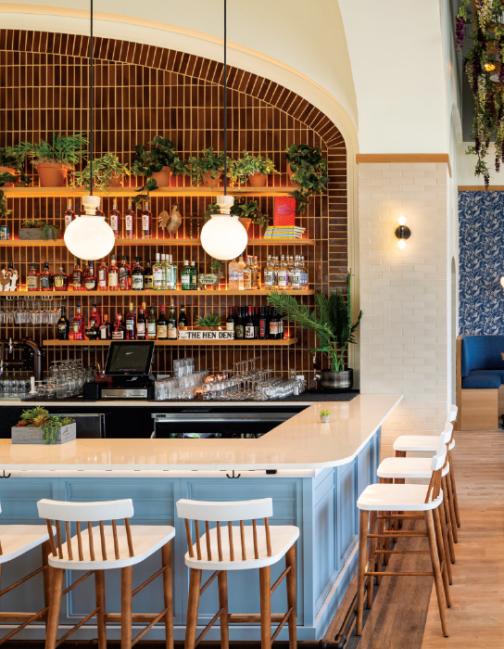 Tupelo Honey is resonating with millennials and younger consumers in particular, she adds. And the brand’s biggest impact, thus far, has come in emerging, or reemerging cities; not big metropolitans. This is a guest base that values social issues and product integrity. They’re also willing to pay slightly more for it, Skinner says, “because they care about the quality behind the food that they’re eating.”

Additionally, and this speaks to how Tupelo Honey has grown thus far, the brand is looking at markets where it can introduce Southern as a core identity and pillar. It’s not going to open in Charleston, South Carolina, in other terms. “We’re giving these places something unique, and we’re really creating an experience there within the food, within the spaces that we create,” Skinner says. “And then, we partner with the local communities to say, we can honor your history, but bring something new and unique there.”

This latter point is taking shape broadly in full service, she believes. In early 2022, Tupelo Honey opened in Station Square—a former Pittsburgh & Lake Erie Railroad freight holding building. The brand designed a wall mural of a train that pays homage to the city’s historic “Little Giant,” as the railroad was called.

“We’re not going to do a cookie-cutter box,” Skinner says. “We’re going to be part of the community. We’re going to design a restaurant space that’s a part of this community that honors the people and really appreciates the history.”

COVID-19 amplified the brand’s aforementioned commitment to people. Skinner came up through human resources. She started as an HR rep at supermarket Earth Fare before climbing to operations strategist. Her first position at Tupelo Honey, from 2013–2015, was as senior director of HR. She stayed on that path (first as vice president of HR and then senior vice president of HR) before taking on a role as executive vice president and chief of staff in fall 2019. Skinner assumed her current COO post in December 2020.

She joined Tupelo Honey as it was building its first out-of-market location, leaving the familiar confines of Asheville for Knoxville, Tennessee. As it did so, the company wanted to answer a question, Skinner says: Amid expansion, how could it hold as true to its commitment to workers as it did when it had just one store?

The chain has what it calls, Honey Pot benefits, which expanded in 2021. The brand increased wellness reimbursement by $100 (up to $350) and tuition reimbursement up to $1,000. It offers transportation reimbursement—also to $100—and recently broadened paid parental leave to cover both parents and adoptive parents at 50 percent of an employee’s wages for up to six weeks.

To combat turnover, Tupelo Honey increased PTO allotments, starting with 10 hours for each full-time worker when they pass 90 days. In 2022, the chain will up the accrual rate for all employees. Full-timers will accrue 40 hours in the first year, 80 in the third and thereafter.

Employees can even opt-in for pet insurance and sign up for a 401K. Healthcare, which was not common in 2011 and 2012 for restaurants, has been a part of the Honey Pot for years.

When the pandemic hit and Tupelo Honey was forced to close dining rooms, it saw an opportunity to take its No. 1 selling item, biscuits, and pay it forward. Pre-virus, the brand gave them away with every meal. It started selling Biscuits for a Cause in 2020 and adding profits into a fund. In turn, it’s helped about 300 employees with more than $350,000 for everything from financial hardship to medical issues.

The program funded Tupelo Honey’s Project ASPIRE as well, which is a diversity and inclusion project formed in fall 2020 to elevate BIPOC and female members of the chain’s management team. Members participate in panel discussions and receive 30-plus hours of additional training throughout the year.

Going forward, with inflation and lingering pandemic hurdles, Skinner says value as experience will remain a core strategy of Tupelo Honey. If customers understand what goes into everything that comes out of the kitchen, they’ll embrace the cost. And that starts internally.

“We know we can’t carry out that commitment without the quality of employees,” she says. “You can see that as you go out to dine, or order takeout—it’s few and far in between these days that you can say ‘I’ve had an exceptional experience.’ And I believe a large part of that is this labor shortage that we’re dealing with. So for us, we’re going to put it all on the line and say we want great people, and we’re going to invest to have those great people, because great people execute great food.”

As in-person dining returns, Tupelo Honey is becoming more selective with some of its pivots. It’s pulling back on QR codes and getting more selective with third-party partners. It’s keeping curbside and transitioning its table management system so it can glean better visibility into what customers actually want. In other words, it’s doubling down on data as a means to deliver experience, rather than replacing human contact with technology.

“If we know someone is coming in and they have a social media engagement presence, we can introduce them to things like our selfie wall. If we know someone really cares about sourcing, we can give them more educational points on our purveyors,” Skinner says. “Our hope is the systems we put in place allow us to get to know our guests better and to customize how we interact with them.”

“It all comes back to that element of individualized self-expression,” she adds, “and creating unique experiences for everyone.”