The concept could potentially open 14–15 restaurants this year, nearly doubling its footprint.

For most of the restaurant industry, the proverbial “light at the end of the tunnel” still seems far out of reach.

According to a National Restaurant Association survey of 4,200 restaurant operators, 76 percent said business conditions are worse now than they were three months ago. Additionally, 63 percent said sales volume in 2021 was lower than it was in 2019.

Count Toasted Yolk out of that group. Cofounder and CEO Chris Milton calls 2021 “a really fantastic year” and currently, sales are increasing anywhere from 15–20 percent at the chain’s 19 locations.

Before COVID, off-premises mixed 5 percent, but during its peak, sales outside the four walls represented 20–25 percent of sales. The channel has now settled at 10–12 percent, which Milton attributes to Toasted Yolk’s lunch menu. In July, the chain reported 20 percent of sales took place after 11 a.m.

It also helps to be part of a surging daypart. In the last three months ending November, online and physical visits to restaurants for breakfast increased by 11 percent, compared to a 10 percent drop in 2020, according to the NPD Group. Visits to dine-in at breakfast grew 51 percent in September through November in 2021, whereas in 2020, traffic declined 55 percent.

“What we've picked up and what seems to be kind of staying there is that we've become that meeting place outside of your house and there's a big segment that is going back to the office and so they're going to conduct business,” Milton says. “Typically, they do it in one of our locations, and I think that's a big part of our sales increase right now.”

With sales growing in the double digits, franchisees are eager to engage in unit development. More than 90 percent of existing operators want to own more stores, according to the breakfast concept.

Ten locations are in various stages of construction, which takes the brand through August. Several more are looking for sites or in the final stages of signing franchise deals. Milton says Toasted Yolk could realistically see 14–15 openings in 2022, which would nearly double the brand’s footprint. At least 16 more stores are in development for 2023.

The Houston market, where Toasted Yolk is headquartered, is sold out, but other Texas cities are ripe for growth. The concept plans to open its first three stores in the Dallas-Forth Worth area this year and open another unit in Austin. Outside the Lone Star State, there’s growth planned in Southeastern states like Kentucky, Arkansas, Mississippi, Tennessee, and the Florida Panhandle.

All of Toasted Yolk’s footprint is in Texas, except for a Dothan, Alabama, unit that opened in December. The 5,100-square-foot restaurant includes several flat-screen TVs, a large patio, and a dedicated table for first responders. To illustrate its tie to the community, the store partnered with local artist Katie Hughes of Eye Catchers Artworks to paint a mural inside the restaurant.

The Alabama-based Toasted Yolk is owned by Elri Parker, who’s also a multi-unit franchisee of Clean Juice and a single-unit operator of Golden Corral.

“Anytime you leave your backyard, you're a little nervous to see how your brand is perceived," Milton says. "We were fortunate that we've got a great operator there that was really entwined in his community. Our PR and marketing team did a fantastic job."

“ … With the way technology is, they've gone online and were able to see the food and the offerings that we had, and I think everybody was excited to have us,” he adds. “The restaurant's really doing fantastic, and it proves to us that I think that we can grow certainly in the Southeastern United States, if not nationally.” 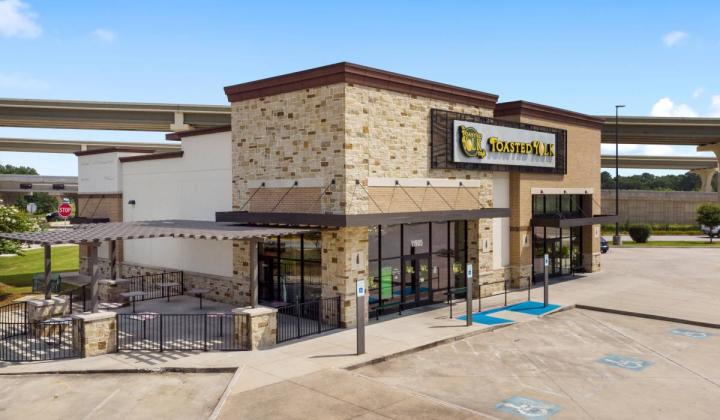 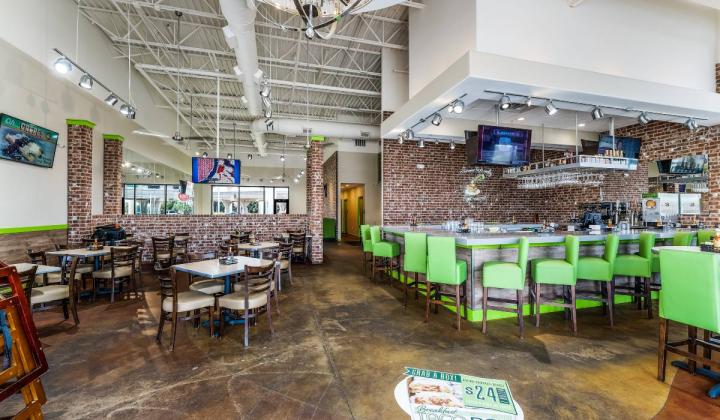 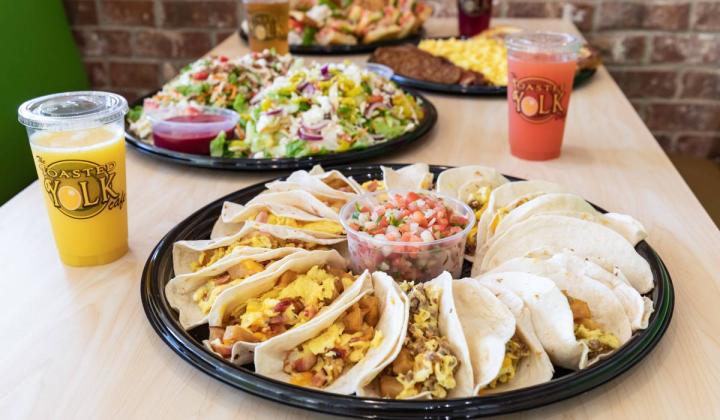 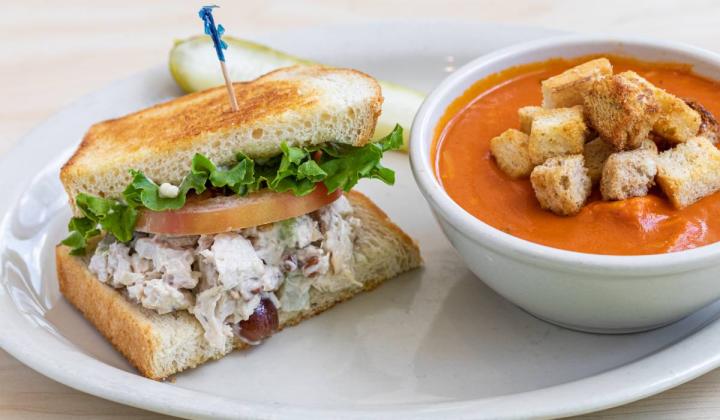 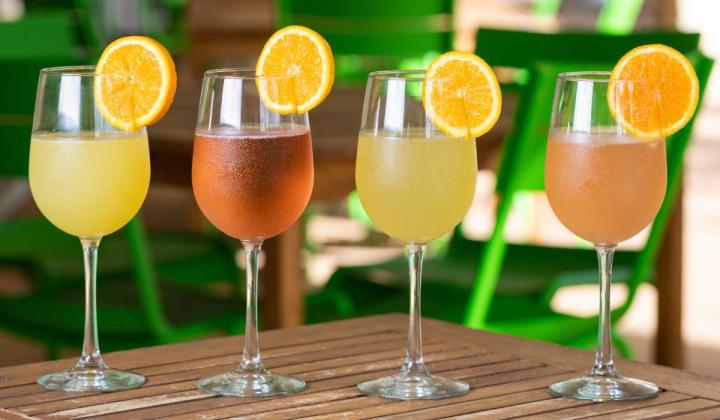 Of the chain’s 19 restaurants, 13 are franchised and six are company-owned.

Toasted Yolk restaurants are typically 4,200-4,800 square feet, with most of the system housed in endcaps that have generous patio space. Milton describes the brand as a destination breakfast place, meaning “we're not the cheapest game in town and don't intend to be.” To that end, restaurants are based in affluent areas that have good daytime traffic and a solid mix between residential and business.

Fellow breakfast chains like Perkins and IHOP are opting for smaller boxes to cut costs and improve efficiency, and Toasted Yolk will look to do the same in some areas. However, he is wary of the process; kitchens have to be a certain size, or else it will interfere with operations. He thinks the brand is capable of shaving 200 or so square feet, but nothing beyond that.

Of the chain’s 19 restaurants, 13 are franchised and six are company-owned. There are plans to develop another corporate market other than Houston, but that spot has yet to be determined.

“Through all this franchise growth, we kind of had to retool our system and make sure that we could offer the support that we promised, and so I think we've been able to do that,” Milton says.

The breakfast CEO says franchisees are attracted to Toasted Yolk’s family atmosphere in which operators know they are “more than just a number” and the brand isn’t “trying to grow as fast as we can.”

“There's something to be said to have your day finished by 3 o'clock in the afternoon and be able to come home and eat dinner with your family and have your day be finished,” Milton says. " … If you want to work in full-service restaurants, you're coming to us first. I think that's been the biggest selling point for our system and people in our segment is that we're not feeling a lot of the crunch that the dinner houses and some of these other places are. Our restaurants are fully staffed and people are excited to come to work.”

Because of inflationary pressures, Toasted Yolk has raised prices, but Milton says the brand is doing its best to keep those hikes as minimal as possible.

He believes the biggest opportunity is with supply chain, where the company is combatting product and equipment shortages. To ensure the brand’s growth strategy remain on track, the chain pre-purchased equipment for six restaurants to avoid similar situations faced in 2021—anything to keep the ball rolling in what could be a banner year for the company.

“We're super excited about 2022,” Milton says. “I think we came through the pandemic, which was probably one of the worst things that a restaurant could get through, and I think our team came through extremely well. So as we look forward to the rest of this year, I think we could become a real leader in our segment.”