THRōW Social is looking to expand further in Florida.

THRōW Social Looks to Be 'Golden Ticket' of Eatertainment Industry

After a major scare early into the pandemic, the concept is thriving in Florida, earning $1 million per month.

Entrepreneur Ginger Flesher-Sonnier has spent the past eight years building the Ginger Companies, a budding social entertainment empire. Her latest achievement, THRōW Social, appears to be the catalyst.

The former math teacher began with Escape Room Live in 2014. Three year later, she jumped to Kick Axe Throwing, housed in what she calls a cozy, Canadian lodge environment as opposed to the typical warehouses she came across. Her concepts gained traction, with the likes of Twitter, Google, and Facebook all holding corporate team building events at these locales.

“It was a totally different vibe, but still immersive, with making it a Palm Beach chic look and feel, so very summery,” Flesher-Sonnier says. “The exact opposite of what Kick Axe was. And I just ran with that idea. … Some people say, for example, our coconut shrimp is the best they've ever had. It's nuts. People have been asking us to sign up on Grubhub. So it's not what you expect. It's not your typical bar food. We really care a lot about that.” 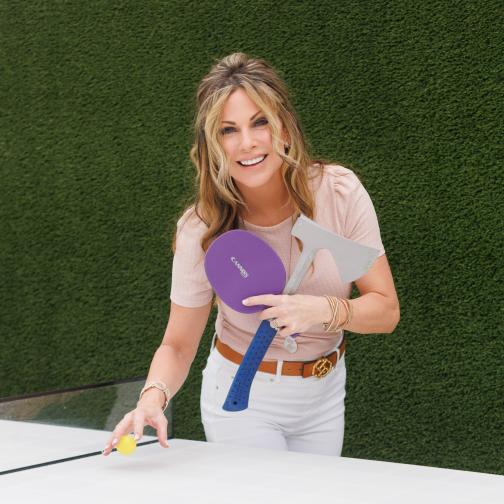 Because of building delays and permitting issues, THRōW Social didn’t officially debut until 2020. The good news—the opening was “phenomenal,” Flesher-Sonnier says. The bad news—it was only open for three weeks before the pandemic locked down activities. At that point, there wasn’t much confidence in the concept’s survival. All of her brands are self-funded, and COVID wiped away financial reserves. Even worse, THRōW Social didn’t qualify for the $28.6 billion Restaurant Revitalization Fund because of its entertainment offering and couldn’t apply for a Shuttered Venue Operator grant since there weren’t live performances. THRōW Social was stuck in limbo, and it was terrifying, especially with what the landlord commanded in rent.

The brand’s saving grace came 1,000 miles away in Delray Beach, Florida, where Flesher-Sonnier opened the second location in January. The 12,000-square-foot outpost is an enhanced version of its Washington, D.C. counterpart, with outdoor space and live music. The new unit is earning $1 million per month—the best performer among Flesher-Sonnier’s collection of concepts.

“During COVID I moved to Florida—not very far from Palm Beach—and I decided to do another one here because everything was open and businesses were thriving,” she says. “I recreated the concept down here, but with it mostly outside. This venue was kind of a pocket [listing] deal. It had 6,000 square feet of patio with a huge stage and bars. And I just jumped on that opportunity and recreated it down here and then got to add the live music and all kinds programming that made it super exciting.”

The Washington, D.C. location didn’t reopen until June 2021. Business picked up once customers returned, but it’s nowhere near what’s happening in Florida.

The inaugural location attracts 25–45 year olds, primarily women because of the aesthetics, Flesher-Sonnier says. The Florida unit attracts a swath of people from 21-70, including a good portion of active retirees. Because of that wide range, live music starts at 7 p.m. instead of 9 p.m. to allow older demographics to enjoy the entertainment. As the night goes on, the playlist caters more toward the younger crowd, and then a DJ gets involved. 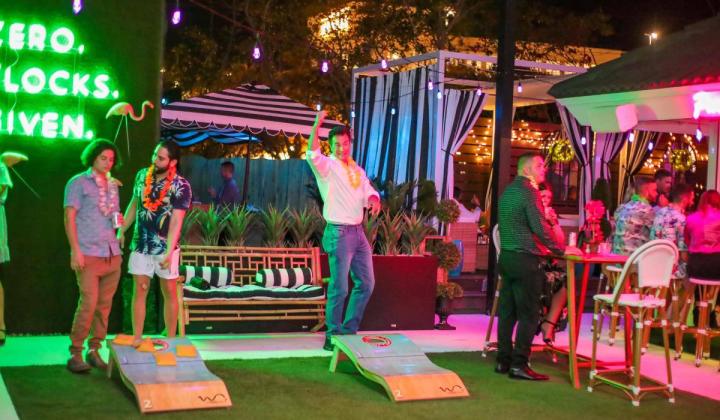 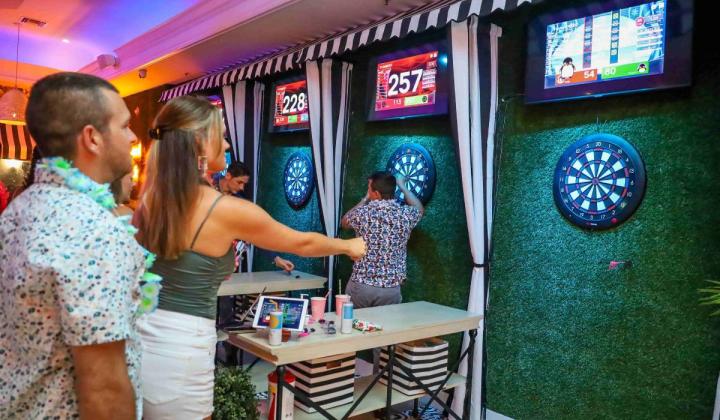 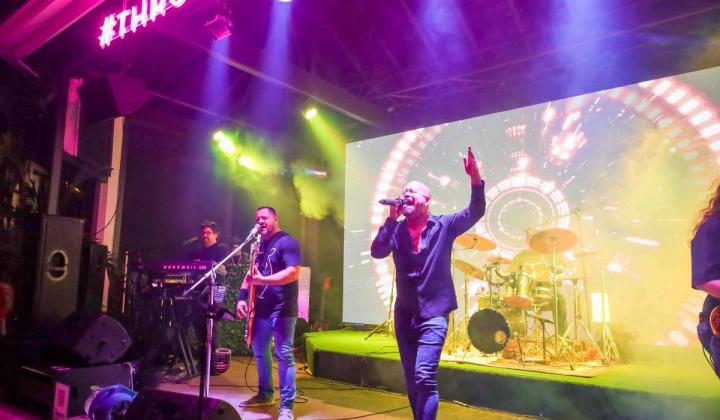 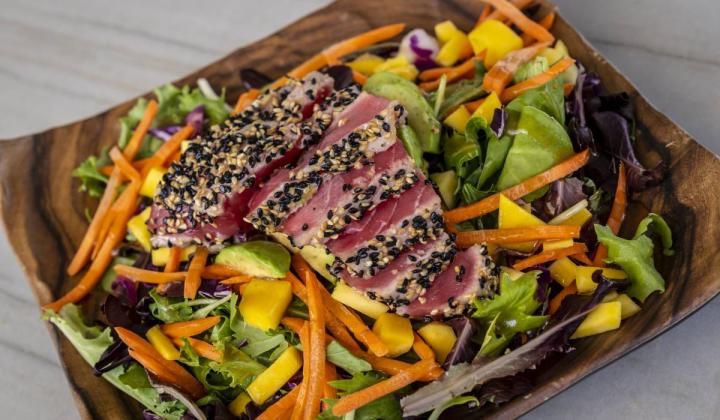 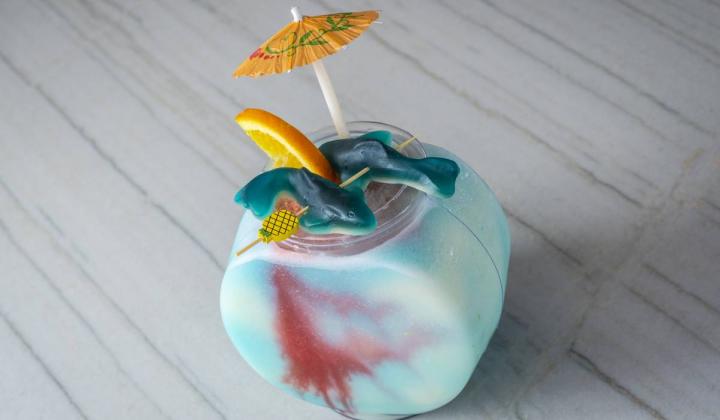 Due to success in Florida, THRōW Social is looking to expand.

Flesher-Sonnier is taking learnings from the successful Delray Beach location and applying them in Washington, D.C. For example, the unit in the nation’s capital had football bowling and indoor curling, which hogged a lot of space. The venue has since gotten rid of those in favor of TapGlo ping pong, LED beer pong, light-up shuffleboard, giant board games, and multiple cornhole sets. Also, it now has a big stage for live entertainment and a rooftop deck—all of which are a part of an official revamp.

“We used to charge for the football bowling and the curling and it was more of a really niche environment, and we've just gone to becoming a super fun cool venue," Flesher-Sonnier says. "You can reserve the cabanas if you want to, but there's plenty of open seating otherwise."

Due to success in Florida, THRōW Social is looking to expand further in the state. Flesher-Sonnier has scouted a few developments, but she won’t sign any leases until completing the updates in Washington, D.C. However, when the time comes for growth, she believes the Sunshine State has enough room for a location every 60-80 miles. The concept is specifically focusing on destination markets like Miami or Fort Lauderdale, and walkable neighborhoods surrounded by other bars and restaurants. She’s open to licensing THRōw Social if the right opportunity comes along.

Flesher-Sonnier says real estate is competitive in Florida, but THRōW Social does have the advantage of requiring a bigger space that’s harder for others to fill. She’s exploring a variety of areas, from locations that don’t have the floor done yet to second-generation restaurant spaces. Beyond Florida, expansion will stick to Southern states because of the slower recovery up north. The Kick Axe in Brooklyn is still not even one-third of what it was pre-pandemic.

“We have a feeling that people are number one, still afraid there, number two, have left,” Flesher-Sonnier says. “For the past year when we've driven up [to Brooklyn], the traffic has gotten less and less. We don't stop for traffic anymore. It used to take an hour to get over the bridge. Parking is available in front of our space now. It's kind of scary, so we're sticking away from the northern big cities. I know that sounds political, but it is simply financial.”

Flesher-Sonnier does have more ideas heating up in the pipeline. She claims one of them has never been seen before and could go nationwide fairly quickly.

But as of right now, THRōW Social is her “golden ticket.”

“We have found something that really offers us a good return on investment for our time,” Flesher-Sonnier says. “So that's what's important to us now is we're a fairly small corporate team looking to grow. We're focusing on what's bringing us the best returns.”