Southerleigh Brings Elevated Dining to Forefront by Honoring its Roots

The NextGen Casual restaurant group continues to build its portfolio, from French brasserie to brewpub to fast-casual pizzeria.

The last of those descriptors speaks closely to how Jeff Balfour, cofounder and executive chef, approaches culinary innovation. As a Texas native, he recalls growing up on the Gulf Coast and taking summer trips to San Antonio. Those types of childhood memories and genuine connections are what he hopes to spark as visitors enter Southerleigh’s collection of restaurants.

The success of this approach speaks for itself. The group’s first brand, Southerleigh Fine Food & Brewery, has earned $41 million in revenue over the past seven years—the highest of any culinary concept at Pearl, a historical district and cultural hub in San Antonio that features more than 22 acres of shops, restaurants, and businesses, and nearly 3,000 parking spots.

“When the food is good and the next time you come, the food is still good and you like it and you’re in a fun environment and it doesn’t break the bank, then people keep coming back. We love that,” Sérot says. “When you truly love what you do and when you’re truly sincere about how you approach a business exchange with customers, it shows. And the formation of Southerleigh is based on that.”

Southerleigh Fine Food is housed in what used to be Pearl’s Brewhouse, built in 1894. By 1916, the venue became the largest brewery in Texas and was the only one in San Antonio to survive prohibition. The menu marries Balfour’s experiences from coastal Galveston, Texas, with comforting Southern cuisine, including Fried Snapper Throats, Antelope Tartare, and Galveston Bay Shrimp Boil.

The restaurant group repeated its triumphs with the debut of two additional concepts in 2020—Brasserie Mon Chou Chou and Southerleigh Haute South.

The former highlights Southerleigh’s French roots. In France, restaurants use the term brasserie to describe an informal and casual setting in comparison to the more upscale locations typically associated with the cuisine. “Chou chou” is a term of endearment in French; your chou chou could be your best friend, your dog or cat, or your favorite place to be. Similar to Southerleigh Fine Food, the menu invokes memories of families and friends from three French founders: Sérot, Laurent Réa, and Philippe Placé. Some of the comfort dishes include Souris D’Agneau (slow braised lamb), Plateau D’Huitres (East Coast oysters), and Côte de Porc (seared pork porterhouse).

“We were basically the first great news that people were waiting for,” says Sérot, remembering the store’s opening in December 2020. “People were starting to get out a little bit more. It was in between the vaccine starting to come a little bit. So all of that contributed to, ‘Oh my gosh, finally something to do and something new.’” 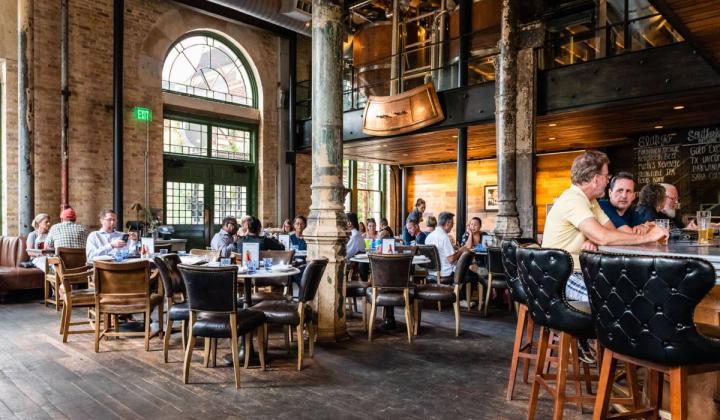 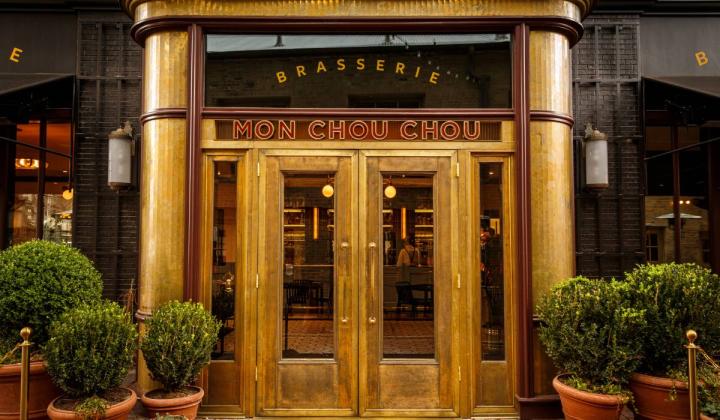 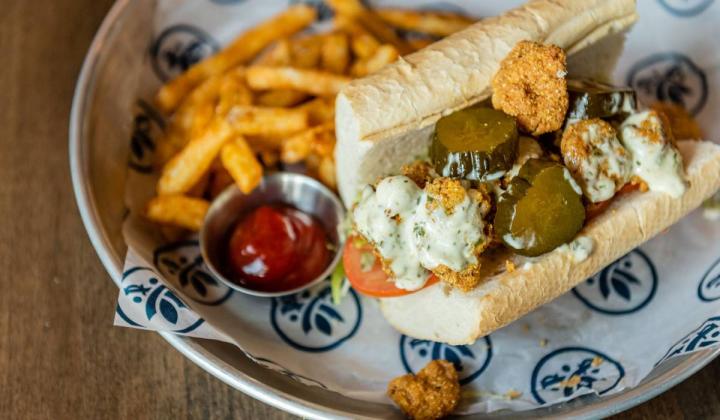 A few months prior to opening the French restaurant, the team debuted Southerleigh Haute South at The RIM, another large mixed-use development based in northwest San Antonio. “Haute” translates to “high” in English, or in this context, a higher quality menu. The word is pronounced as if it rhymes with “coat,” but for Southerners who grew up saying “hot,” that works too, Balfour says. One pronunciation is an ode to Southerleigh’s French leadership, while the other is a double meaning alluding to the warmer temperatures of Texas.

Serving breakfast, lunch, dinner, and weekend brunch, Southerleigh Haute South is labeled as a pressure-fried chicken and Gulf Coast seafood location. The menu includes fried and rotisserie chicken, sandwiches, po-boys, pork chops, fish filets, meatloaf pie, and more. The restaurant is likely to be the first Southerleigh brand to add a second unit. There are plans to open a pop-up in New York City and experiment with the concept’s affinity in a different market.

Brasserie Mon Chou Chou and Southerleigh Haute South both debuted during some of the worst stages of the pandemic. The unpredictable future gave Southerleigh pause, but ultimately, leadership decided to power through. That’s the ethos of the company, Balfour says.

“We operate with this internal confidence that we’re really our best when we’re faced with different scenarios and different odds of being successful,” he says. “And that was one of the things we just carried over. We’re not going to stop. We can adapt and we can, with what we’re given, try to put forth a good product. I think so far we’ve been successful in that.”

The New York pop-up is scheduled to launch in the first quarter of next year. Around that same time, Southerleigh plans to debut its first fast casual, Pizza Fritta, and Southerleigh Brewery, a 12,000-square-foot facility and tasting room meant to increase its beer production capacity.

Pizza Fritta will offer fried Neapolitan pizza, which is akin to a handheld fried calzone. The company says few restaurants in the U.S. serve this specific dish, and none do in San Antonio. The idea is for the first store to serve as a template for future expansion across the country.

Southerleigh Brewery will open so the company can send supply to grocery stores and other retailers throughout Texas. Balfour explains that through being creative, pushing limits, and being approachable to consumers, Southerleigh Fine Food found large demand for beer in its 128-year-old building. But the multi-use nature of the facility prohibits expansion of brewing operations, and that’s where Southerleigh Brewery fills in.

Balfour believes the company is capable of becoming a leader in San Antonio’s craft beer market, if not Texas—just like the original location was back in the early 1900s.

“Right now, we produce about enough beer for our restaurants only,” Balfour says. “We are going to get off the ground very quickly and expose more people to our beer, which is exciting for us.”

Sérot has little trouble explaining the reason for those accomplishments. To him, it’s not complicated.

“I mean, at the end of the day, service, hospitality, it’s in our blood,” Sérot says.