As a former president of Topgolf, Troy Warfield is quite weary of the term “eatertainment.”

He says the word suggests a venue where customers will indeed be entertained, but also have an average—or even below mediocre—food and beverage program.

Warfield insists that’s not the case with Oche (rhymes with hockey), a rising global chain with four units in Norway, the Netherlands, Australia, and Sweden. The concept essentially automates the game of darts and combines it with a menu crafted by Michelin-starred chefs and award-winning mixologists.

“We are a technology business in hospitality, and we are here to create shared happiness for our guests,” says Warfield, who’s served as Oche’s CEO since March 2021. " … We use technology to take out all the pain points of service. And then obviously people elevate the service experience by the way they bring their personality and the brand to life in terms of interactions with their guests."

At Oche, the days of using chalk and mental math to track scores are over. Players use real darts and real dartboards, but video-tracking technology and algorithms take care of everything else.

The chain offers a selection of creative dart games. One example is “Killer”: If a player hits their assigned number three times, they become a killer, meaning they can start targeting other opponents and take them out of the game. There’s also “High Striker”: players, each with three lives, battle to beat the previous person’s high score; if one can’t beat it, they lose a life.

Oche’s typically sees an even split between male and female, which Warfield attributes to the gender-neutral nature of darts. The brand primarily focuses on bringing in women between 25 and 35 years old.

“The game itself, really what it does in terms of using technology, it becomes a game that everyone can play,” Warfield says.

The chain’s menu is globally inspired, with influences from Asia, Latin America, and Europe. The specific choices depend on location. For instance, in Australia, the food options include red and white pizza and a variety of shareables, such as Mexican Falafel and Vietnamese Pork & Lemongrass Skewers. In the Netherlands, there’s Fresh Toasted Pita, Spicy Tuna Cone, and Oven Roasted Romanesco.

“Within that you sort of get a taste from around the world,” Warfield says. “And what we've been able to do is fine-tune that over time to ensure that what we present, the favorites have ended up on the menu. When we enter any cities, we obviously test that out, and if there are any really specific local cuisines that stand out that are almost must-haves on the menu, then we take that consideration as well.” 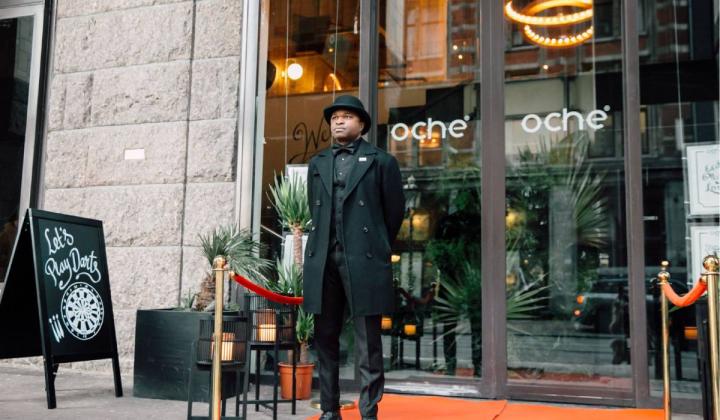 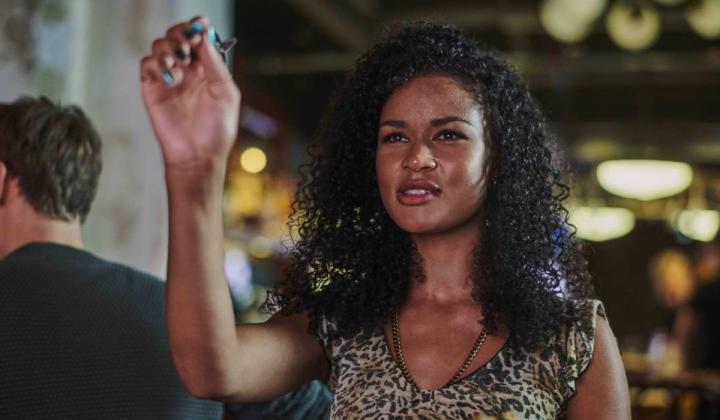 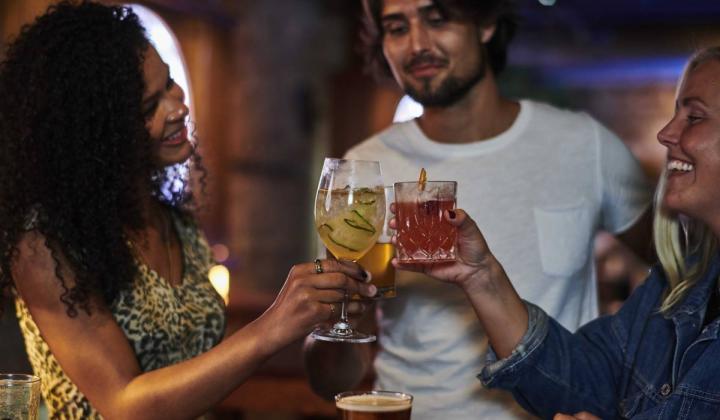 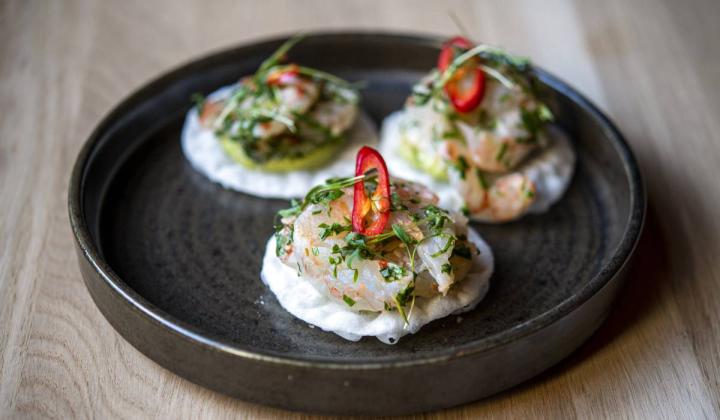 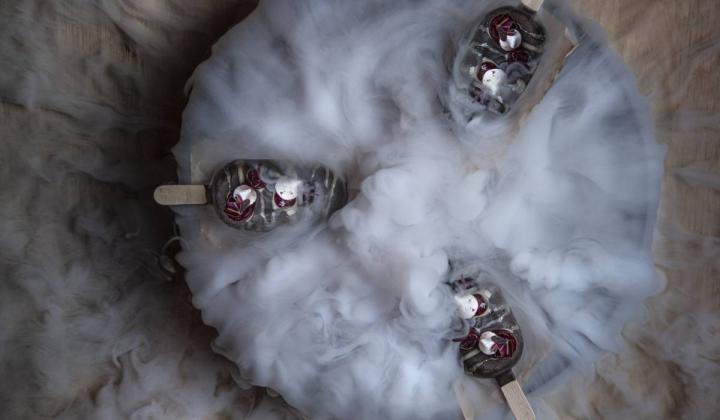 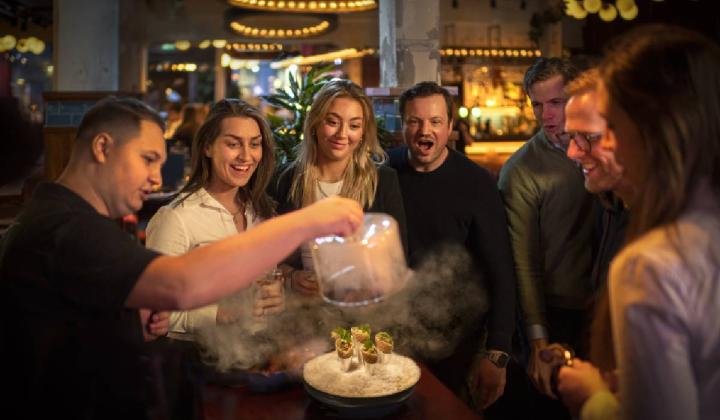 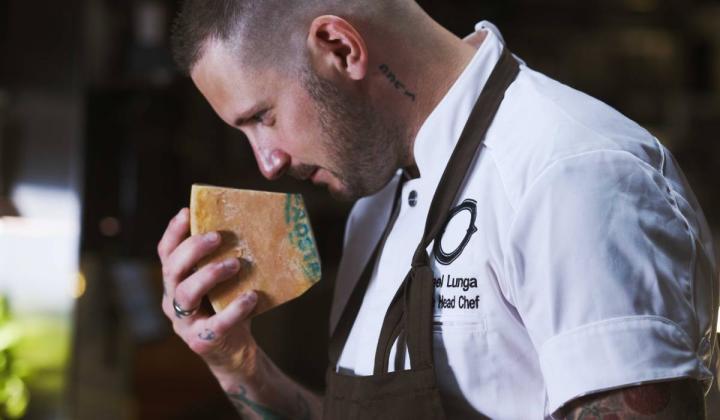 Oche’s four locations are thousands of miles apart, but Warfield says each store has proven to be equally as compelling to consumers. Because all units are doing “incredibly well” in different continents, the CEO feels confident in the concept’s ability to enter the U.S. and deliver the same proposition to franchisees. The brand will leverage an experienced leadership group that collectively has prior experiences at Gordon Ramsay Restaurants, Burger King, PizzaExpress, and Walmart.

The domestic journey isn't theoretical either. Oche opened its first U.S. location last year in Miami with 13 tech-driven dart booths, food items like Sweet Chili Prawns Mofongo and the Wagyu Burger, and beverages, such as Mango Tip and Tamarind Sling.

The outlet closed because the landlord sold the building, but not before Oche gathered enough positive results.

“We were delighted with the response,” Warfield says. “When people tried it and they got that combination of what I've described before—of the fantastic food, the great service, the game itself—they not only thought it was a unique experience, but a really, really enjoyable one. And the feedback was there's nothing like this, and they loved it as a result.”

The CEO feels the brand would work in any U.S. geography, including a potential return to Miami. Warfield, who recently attended a franchising conference in Las Vegas, says conversations are beginning, and the company believes it could “get into a good situation through the course of this year.”

Ideal franchisees have hospitality-based backgrounds and a defined geographic area in mind.  Experience with combining food and beverage with entertainment is a plus, but isn’t necessarily mandatory since “the world of competitive socializing is at the beginning of its growth journey,” Warfield says.

“[The market] really could be as big or as small dependent upon the size of the franchise partners that we find,” Warfield says. “ … The financial benefit for a franchisee lies in the fact that they make money from the [food and beverage] and the revenue from the gaming is cost of goods free, hence a great EBiT and return for capital.”

Warfield recalls that much of his Topgolf days were spent taking the U.S. business and building it around the world, and learning to take a core proposition and tailoring it to a local environment—not too far off from what he’s trying to accomplish with Oche. Both companies also cater to a younger age group that wants to use its disposable income on experiences as opposed to material things.

In many ways, the CEO says, what Topgolf did for golf entertainment, Oche is trying to do the same in the dart space.

“I'm encouraged by the interest that we've already started to get in the brand, and people are getting the proposition and how clearly we are differentiated to many things out there,” Warfield says. “My ambition would be that we translate a lot of conversations into some multi-unit franchise contracts and we can start seeing some venues open in the U.S. this year.”