Mr Brews is based in Arizona, Florida, Kansas, Kentucky, and Wisconsin. More could come in new market sTexas and Arkansas.

In 2021, Mr Brews Taphouse sent a message to NFL quarterback Aaron Rodgers—come back for another season and get free burgers and beer for life.

Rodgers did indeed return last year, even winning the MVP award. However, COO Mark Leach would be lying if he said Rodgers picked up the phone and asked how the deal works. But that’s okay with him. Mr Brews is getting plenty traffic without the pro football superstar.

In May, the 15-unit NextGen Casual reported a 46 percent increase in sales in the first quarter, including a 28.1 percent rise in transactions. The chain closed the period with 15 straight months of positive sales growth and five consecutive quarters of increases. Then, in early September, the chain debuted a 2,800-square-foot store in Venice, Florida, which proved to be the company’s most successful opening in history. It topped the previous mark by 18.5 percent, racking in $45,000 in the first week.

Leach owes that success to Mr Brews’ familial and community-focused atmosphere. It’s as simple as hosting cornhole leagues, a sport that’s quite popular in Wisconsin. Some restaurants have around 20 teams. Customers can come watch the big game on television, but by no means does Mr Brews identify as a sports bar. Guests can also taste test among 40-60 beers on tap to find their favorite, immediately getting face-to-face interaction with the bartender. The restaurants only range from 2,500-3,000 square feet, creating a warm, intimate dining environment, Leach says.

“To give you the comparison, and they've done a great job recently, but Bar Louie is looked at as the late-night hours,” he says. “Matter of fact, they do 30 percent of their business from 11 p.m. to 2 a.m., and we're just not like that. We’re more of that Cheers atmosphere where people come in, they can connect, we have a wide selection of beers that folks can taste, so no one ever gets a bad beer that they didn't want. Sometimes I think we're the best kept secret out there to be honest with you. Just very simple and gives us the opportunity to really create an environment where people want to come.”

Leach also notes “freedom within the framework,” which allows franchisees to embrace local breweries and interior design that matches the community vibe. The COO emphasizes the food menu, as well, comprised of many scratch-made items and burgers pressed in clam grills. As for the record-breaking opening, Leach says the newness factor helped. Venice is Mr Brews’ second Florida location, but the other one in Melbourne is 200 miles away. The previous record was set by the Mesa, Arizona, location that opened in 2021. It’s the chain’s first store in the state and run by Tomomi and John Milleson, franchisees that “had so much background, we really felt [they were] a safe bet.”

“The beauty of that situation is we had a little fun with that,” Leach says. “We called it the dream team. We knew each other for 15 years prior to that. So I knew what I was getting when I had the opportunity to bring them on so we could hit the road running with—here's what we need in training, here's what we need in HR, OK here's what we need in analytics. Not everybody gets to bring some folks that they've worked with in the past, but I had that privilege, and it's really worked out well.” 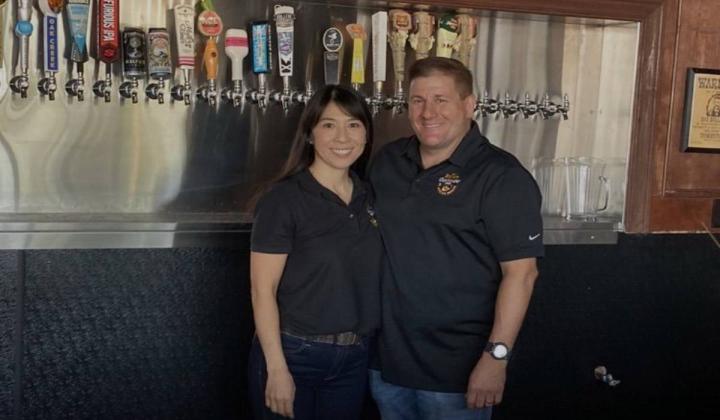 “We're not wired to be alone, and our pubs really create a fun, good atmosphere,” Mr Brews Taphouse COO Mark Leach says. “We’re looked at as a gathering place for friends and family, and people were just ready to get back.”

Amid this growth, Mr Brews is ensuring it has the proper staffing. In August, the company announced its partnership with hiring platform Workstream, which posts to more than 25,00 job boards and engages candidates via text message. Leach says staffing is not where he wants it to be, but it’s much better than before.

“We pride ourselves on our culture, and creating a great work environment. We want our teammates to say, 'I'm glad I get to go to work, not that I have to go to work,'” he says. “So we try to create that environment. I think if we do that, coupled with the partnership with Workstream to help those key individuals, I think we’ll be really poised in 2023 to be back to where we were before COVID and the Great Resignation came into play."

In terms of future growth, Mr Brews is close to a deal in Texas and Little Rock, Arkansas, which would be new markets for the brand. The franchisee in Venice has three more locations in the queue, too. The beer chain is even sending out feelers internationally that Leach believes will come to fruition. The COO acknowledges that some groups have appeared hesitant because of the economy, but he’s confident Mr Brews can alleviate much of that worry by demonstrating recent success, especially with new store openings. Prospective operators may also be attracted to the company’s potential prototype innovation.

Leach says the chain is exploring drive-thru pickup lanes in partnership with franchisees, although nothing is close to solidified yet.

“We're looking at all the revenue streams and understand that that may be something for our guest to still have a great experience at home with our product and maybe not at the restaurant,” Leach says. “We see that off-premise is such an integral part. My hope is that we can continue to capitalize on that. We probably doubled our carryout and third-party percentage over the past couple of years, so we still think that there's room to grow with that. And if there was a viable drive-thru that made sense that still kept that pub feel in the restaurant, we would look at that.”

Mr Brews is based in Arizona, Florida, Kansas, Kentucky, and Wisconsin, meaning the chain isn’t necessarily beholden to growing regionally. The company started in the Midwest, but the chain has learned in the past year—like the record openings in Florida and Arizona—that it’s well-accepted in warmer climates. Customers can enjoy year-round patios, which played an integral role during COVID, and Mr Brews in turn takes advantage of higher AUVs.

The goal is to open one, if not two, more units in the fourth quarter. In 2023, the brand will look to add four restaurants. Right now, the chain stands at 13 franchises and two company-operated units, and Leach says that style of growth will continue going forward.

“We're not wired to be alone, and our pubs really create a fun, good atmosphere,” the COO says. “We’re looked at as a gathering place for friends and family and people were just ready to get back.”