The Lost Cajun opened four stores during the pandemic.

The Lost Cajun Finds its Way Back to Growth

After a bankruptcy and every COVID twist and turn imaginable, the revered brand is ready for a comeback.

Raymond Griffin is still learning to be the “no guy.” In the infant years of The Lost Cajun, it was a high-speed train racing through a fairy tale. Griffin, a fishing lodge owner from Louisiana, was on vacation to Durango, Colorado, when his late wife, Belinda, needed a break for a back injury. The pit stop was Frisco, Colorado, a town 9,000 feet above sea level and a long way from the Bayou. He took $35,000 and started an 850-square-foot restaurant, which wasted little time surprising Griffin. He called himself “a babe in the woods.”

One investment turned into a $100,000 bill. Griffin had to learn food costs, how to balance his hours, and when to recognize bad hires wanted to sell him “a bill of goods.” But the other unforeseen reality was the response, as customers snaked around the building as soon as the doors opened. Quickly, franchisees wanted to get in on the ground level, too (the original store, which is now owned by Griffin’s granddaughter, earned $300,000 in revenue in the first year).

Come 2015, The Lost Cajun started franchising and much of its early connections were organic. Griffin didn’t advertise and found himself linking up with admirers of the brand as much as opportunists. “Look, anybody that wanted it, and they could show me excitement, I was saying, ‘yeah, let’s go,’” Griffin says. “And then I paid for it.”

In that momentum, though, came another turning point for Griffin. This time as a franchisor. “Too fast growth is too fast growth,” he says. “You can’t do it well.”

Griffin realized The Lost Cajun didn’t need to open 10 stores per year. It could bring five or six to market and protect the magic that gave one of the category’s most differentiated brands its backbone to begin with. Cajun staples built to scale, with great service at an accessible price point.

Early success proved, Griffin says, The Lost Cajun’s model was profitable and its food stood up. “We know it works without a doubt,” he says. “… But they have to have the right operator.”

So now, Griffin looks for three boxes: Franchisees should have business chops; preferably experience in restaurants; and boast a people-pleaser personality that fits the task.

It emerged on December 7. The Lost Cajun shed five stores in 2020 and one in 2021, as of August court documents. Across the pandemic, Griffin says, the chain opened four and is now preparing to grow again.

“You know what?” he says. “We’ve made it. The bankruptcy is over.” Griffin says he put in some personal money to get through the process and “I’m on the other side of it now.”

The Lost Cajun today has 25 units and in eight states—California (one), Colorado (eight), Louisiana (one), Mississippi (two), North Carolina (two), South Carolina (three), Tennessee (two), Texas (six), and one coming soon to Florence, South Carolina. The California store—in Rancho Cucamonga—opened on January 10. Going forward, the brand believes it can get to the six to eight annual range.

Climbing out of Chapter 11 and navigating COVID was no simple process. In 2020, the company was forced into a number of cost-saving measures, including salary reductions for employees, reductions or the elimination of franchise fees for distressed operators facing temporarily closures or capacity restrictions, and the “cessation of payments under [a] Buy-Sell Agreement,” according to filings. (More on that here)

But the lead setback Griffin still navigates today involves the brand’s pipeline. Given The Lost Cajun doesn’t have any corporate units, when those $35,000–$40,000 checks dried up, so did much of its mobility. The rate of royalties and lack of franchisees joining the system led Griffin to realize he had to explore Chapter 11.

When COVID hit, he says, there were four operators in the process of getting stores open. Leases signed. Equipment on its way. Everybody else, however, got out. Griffin doesn’t fault them. Nobody had a clue what the pandemic’s impact on full-service restaurants would be, or how long it would endure. The Lost Cajun was a brand Griffin built to foster community and hospitality. As he told FSR in 2018, “It’s more than likely your neighbor’s kids are going to be crawling on the floor next to you.” Stores were built without partitions to separate booths. It wasn’t uncommon to see children draw on the floor with chalk. 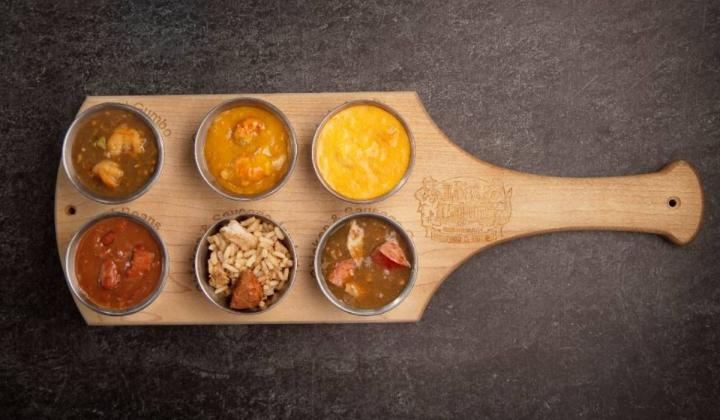 The Lost Cajun greets guests with an array of comfort staples.

Naturally, quarantines and guest fears didn’t play into The Lost Cajun’s equities. Griffin opened stores to defy expectations of what Cajun comfort food could look like. And it starts when the server walks out with a sample platter on a paddle with seafood gumbo, chicken and sausage gumbo, crawfish étouffée, red beans and rice, lobster bisque, and chicken and sausage jambalaya. It’s hard to do that through third-party delivery.

Pre-COVID, sales outside the four walls were less than 10 percent of the business. It’s closer to 35 percent now. Although that’s a major boon for operations getting back on track, as the chain figured out how to get food to travel properly, it’s also an indicator of how challenging things really became. The Lost Cajun is still not quite where it was, Griffin says. But it’s 20 percent up from the bottom. “Which is a great thing,” he says.

And future twists are sure to come. Griffin says a distributor recently told him half of their drivers and warehouse people were out sick with omicron spiking. Deliveries went down from two or three days a week to one. The Lost Cajun is readying for one of its busiest times of the year—crawfish season. But Griffin isn’t sure how labor will factor into that supply as well. The brand tends to skew an older demographic, 44–55, and they’ve hunkered down amid recent surges.

Yet success stories keep emerging. A Canon City, Colorado, opening went gangbusters out of the gates and has already done more than $1 million in sales this year. The California Lost Cajun was more than two years in the making. They struggled to get contractors, sites, equipment, shipping, and staff. “He said I am not going to be deterred,” Griffin recalls of the operator. “I am going to open a Lost Cajun because I know it’s going to be wildly successful.” And it has been thus far.

A few months ago, Griffin and his fiancée took a cross-country drive to visit every Lost Cajun. They documented the journey on Facebook, piling up miles and plates as they shook hands and talked through the last couple of years with the company’s franchisees. “I was tired, but can I tell you, it was an awesome trip,” Griffin says.

Since day one of the pandemic, Griffin jotted down in a “history book” how The Lost Cajun countered each COVID swing. How it survived variants, mandates, learned the ins-and-outs of off-premises, and dealt with each pivot and “new normal” tactic along the path. And like a lot of full-serves, the result is The Lost Cajun feels better equipped to handle whatever comes next.

Griffin is hopeful, as some pundits suggest, omicron can spike and leave a more open country in its wake. With that, pent-up demand The Lost Cajun can satisfy with a new playbook that covers everything from how to support franchisees to what kind of promotions are needed to get food to guests at home.

The big-picture is bringing prospective operators back, too, as mentioned before. Griffin says he has seven inquires on his desk now, which might not be as many as a few years ago but sure feels like a heavy stack compared to the heart of 2020. It gives him confidence, he says, The Lost Cajun can not only refill its pipeline going forward, but do so with franchisees that meet every criteria he has in mind.

“I’m going to be the no guy instead of the yes guy. You know what? I may not open as many, but I’m going to open them better because of that,” he says.

“Maybe we’ll be 50 [units],” Griffin adds of the 100-store goal from before. “Maybe we’ll be 70. But at my age, all I want to do now is have a handful of successful owners, a bunch of happy employees, and provide food that nobody else provides except for me. And you know what, there’s a lot to be said for that.”