The chain recently hired John Brisco, an executive with more than 30 years of experience, to kick international franchise development into a higher gear.

Black Tap started in 2015 as a small burger joint inside New York City’s Soho neighborhood. A year later, the concept won Time Out Magazine’s People’s Choice Award for Best Burger, and a few months afterward, the New York Post referred to the brand as a “cult eatery” and a “must-Instagram restaurant.”

By early 2017, international attention took hold. Black Tap was approached by a group from Dubai, and then The Venetian in Las Vegas—where the brand has a location—suggested how well the restaurant would do at Marina Bay Sands, a luxury, five-star hotel in Singapore. Both markets came to fruition. In fact, Black Tap has three locations in Dubai. There’s also spots in Baharain, Iraq, Qatar, Saudi Arabia, and Switzerland. After being born in NYC, the chain now has a bigger international footprint (11 restaurants) than domestic (five restaurants).

“It's just been great to see that from Europe to the Middle East to Asia, We've been well-received, and we get lots of requests for further expansion,” says co-owner Chris Barish.

The restaurateur believes Black Tap’s global appeal comes from the brand’s DNA, which is to give every customer a “wow experience.” The company wants to surprise guests and be known for more than just a burger spot. Much attention is placed into colorful wall decor, and the music is curated from the best hip hop hits of the 80s and 90s. Barish’s first DJ from his club days programs the playlists across the world, so there’s consistency. The company also became widely recognized for its CrazyShake, an ambitiously concocted milkshake stacked with slices of cake, cookies, candies, and frosting. The rest of the menu, whether it’s burgers, beer, or cocktails, is constantly being innovated. The “painstaking” focus on quality ingredients from the corporate chef is what put Black Tap on additional top lists in Bahrain, Singapore, and Las Vegas, Barish says.

Menu favorites are nearly identical among all markets. There are some differences, depending on the local taste and culture. For instance, prior to entering India, Black Tap will have to develop a menu without beef. Barish estimates 15 percent is tailored to a specific market. The rest is a similar experience across countries. Barish recalls visiting Dubai around Thanksgiving last year and enjoying a burger.

“It was like you're having one in New York or Vegas or anywhere—so consistency of product, consistency of design, music. It’s a fun place," he says. "I think we do use the word ‘fun,’ use the word ‘wow.’ We want to give you a ‘wow’ from experience, and people love burgers and we make good ones.”

The demand is clear, and to better fill that need, Barish brought on John Brisco, an experienced overseas developer, to serve as president of international franchising. The industry veteran spent time as an international executive for TGI Fridays, Ruby Tuesday, Sbarro, Tony Roma’s, and Twin Peaks. Brisco actually created Ruby Tuesday’s international business plan and expanded the chain’s franchise base to 38 countries in five years. While at Sbarro, he established agreements for 1,000 new stores to be developed over a decade.

He brings more than 30 years of experience, and Black Tap’s potential excites him just as a much—if not more—than any other concept he’s worked with.

“It's a brand that really has growth potential—in my mind—anywhere in the world,” Brisco says. “I've used this word way too many times—it’s a ‘wow’ brand. It's a concept that when you walk in there's an excitement in the store, there's a feel of, ‘Hey, this is kind of fun.’ It is Americana. It's what everyone likes I think in today's food and beverage market around the world.” 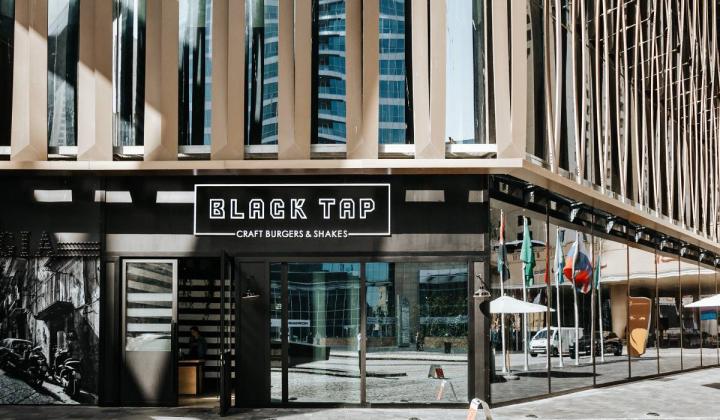 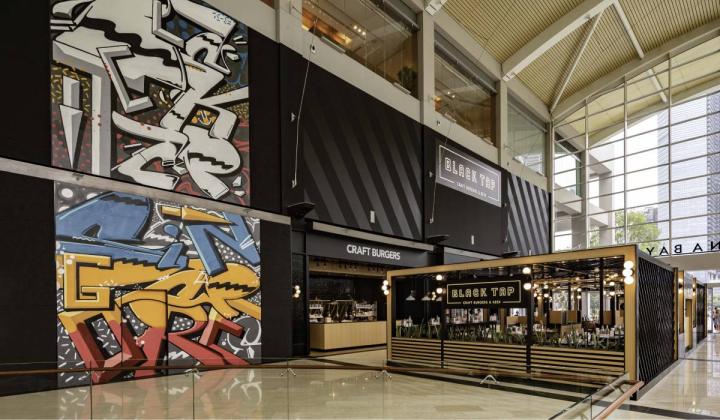 An exterior view of the restaurant in Singapore. 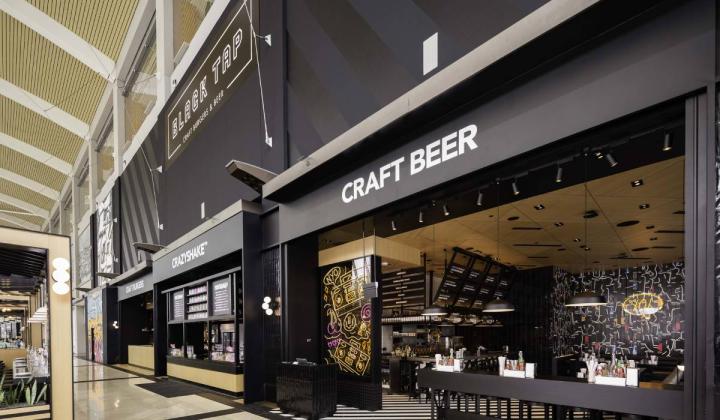 Another angle of the Black Tap in Singapore. 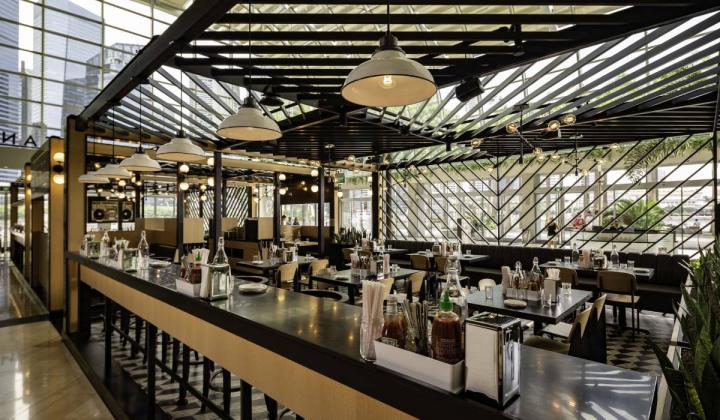 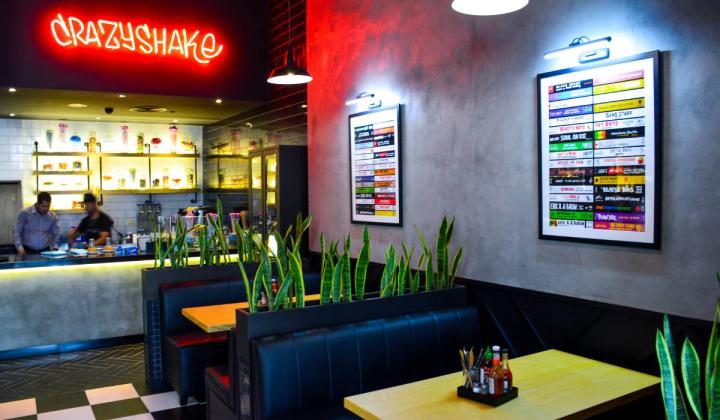 The restaurant in Bahrain.

Brisco embarked on a world tour when he joined the company in June, taking note of diverse demographics. He noted that Saudi Arabia presented difficulties for development in the past, but now women are allowed to go out unaccompanied by fathers or husbands. Brisco remembers walking into the Black Tap restaurant—with its New York hip hop vibes shining through—and seeing groups of Saudi women, families with young children, and tables of men. There’s just one location in the country, but the local franchisee group is interested in further development. He describes the unit in Singapore as “second to none,” after seeing enjoyment from businessmen in suits and ties, families, and teenagers enjoying lunch and dinner.

Black Tap caters to “virtually anybody and virtually any culture,” Brisco says. The greatest whitespace opportunities are Central and Southeast Asia, and the brand is talking to quite a few operators in those markets. There’s also room in Latin America, Chile, Brazil, Mexico, France, and Germany. The footprint is flexible, allowing it to fit in endcaps, freestanding buildings, malls, or open-air shopping centers. Brisco says he’s speaking with a group in Asia with high-volume train stations and other nontraditional sites.

Ideally, Black Tap prefers signing franchise agreements to develop three to five stores in a market, or potentially an entire country. The company hasn’t engaged in master franchise deals, but Brisco says that may come later.

“That becomes much easier from our perspective to support and frankly becomes a real business for the franchisee, rather than one store that could be just an owner-operator situation,” Brisco says, explaining the benefits of multi-unit deals.

International development is flourishing, but that’s not to say there hasn’t been any movement in the U.S., which has locations in Disneyland, Las Vegas, and NYC (three outlets). Black Tap plans to open in Nashville, right off the popular Broadway Street, in Dallas’ Victory Park development, and in Miami’s Brickell City Centre shopping destination. Dallas is a joint venture, but all other units are company-owned.

Barish says Black Tap’s grown organically. He had never been to Asia prior to The Venetian suggesting Singapore. He wasn’t looking to build in the United Arab Emirates either; Dubai officials approached him about bringing it to their country. But with Brisco joining the fold, there’s more of a strategic plan in place, and because of success in such diverse regions, from Switzerland to Asia, Barish predicts faster expansion in the years to come.

“We've done a good job at expanding internationally, and we are thrilled to have John here,” Barish says. “His expertise, experience, his contacts, his understanding of the business, I think can take Black Tap to a whole other level. It's very exciting to have him on the team and his enthusiasm for the brand is very exciting for all of us.”