Five Iron Wants to Create the Next Golfing Fanatic

The growing eatertainment chain extends its appeal to golfing athletes and casual fans looking for fun.

Five Iron Golf is the place for serious golfers. It’s also the spot for those simply looking for entertainment.

That’s been the goal since its founding, says CEO Jared Solomon. While chains like Topgolf, Puttery, and Puttshack focus on the casual golfing fan and places such as GOLFTEC and Club Champion zero in on the experts, Five Iron has created a new niche that caters to both.

“As we see it, if you're going to have a golf lesson next to someone eating a quesadilla, the golf lesson has to be a really good golf lesson and the quesadilla better be a good quesadilla,” Solomon says. “From the beginning, that was the mission, philosophy, and vision of what we're going to do.”

“[Five Iron] is one of the few places on the planet where you can come take 3D golf lessons,” Solomon says.

Solomon says Five Iron aims to change the narrative around the sport and “create golfers out of thin air.”

“When we say Five Irons is for everyone, we really mean that golf has historically been exclusive and has a borderline sexist and racist history, and really, we're trying to make it inclusive and not sort of pinpoint who can golf and who can’t,” Solomon says.

“If I ask you, 'Do you want to go play ping-pong?' You wouldn't say I'm not a ping-ponger,” he adds. “If I said, 'Do you want to play darts and have a beer?' You wouldn’t say I don't do darts. With golf, it's like, 'Oh no, I'm not a golfer,' and we're really trying to be part of the movement to change sort of the perspective on what it means to be a golfer.”

The menu is built to satisfy the varying demographics, such as salads and wraps for the healthier eater and flatbread pizza, wings, and sliders for the more indulgent customer. Specific items depend on location. Washington, D.C’s menu features tacos, pulled pork barbecue, and tuna poke, while Pittsburgh has an Impossible burger, chicken tender sliders, and a chicken quesadilla. Five Iron also offers a full beverage menu, with cocktails, wine, beer, and Swing Oil, a performance drink for golfers.

“A ton of emphasis is put on [the menu],” Solomon says. “It's a really big deal. It's not an obvious place to go eat, right? So we feel like we have to tell the story maybe more than other places.” 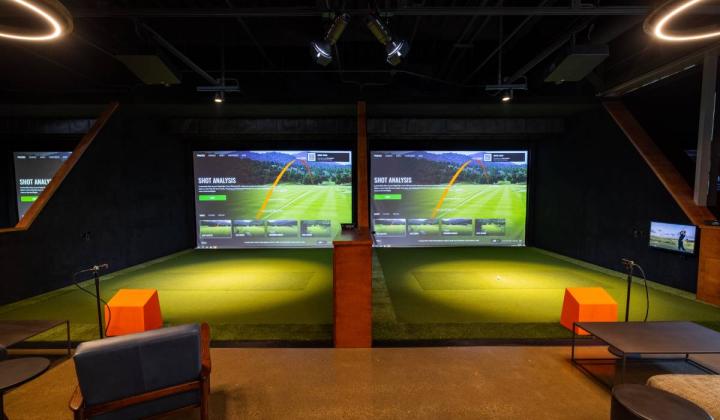 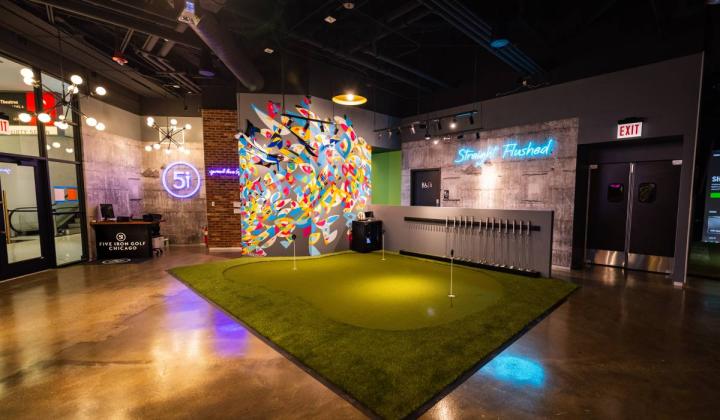 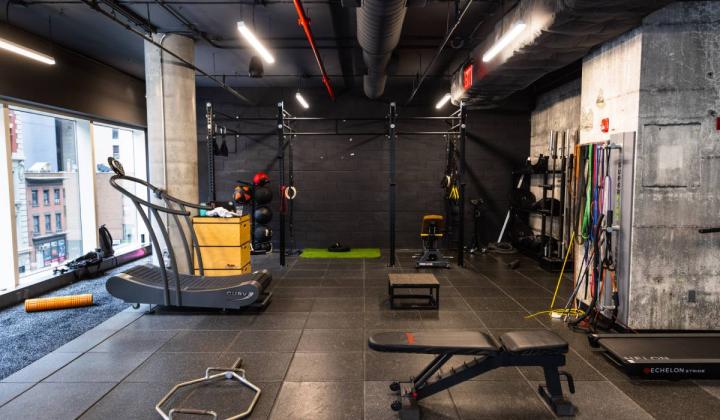 A training room for the serious golf athletes. 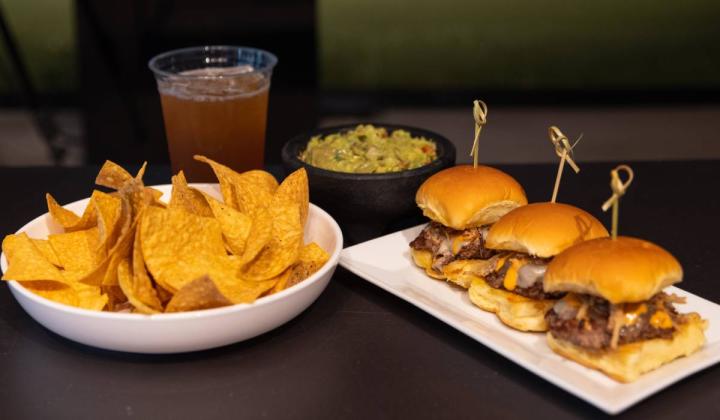 The concept features a full menu that varies by location. 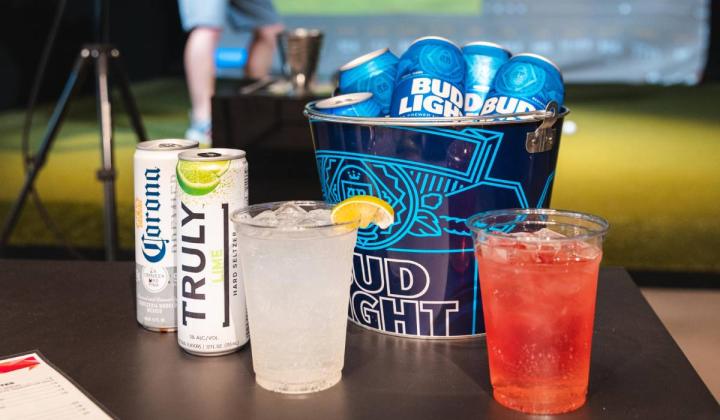 The idea behind Five Iron dates back to 2015, when Mike Doyle taught golf lessons with a simulator in the back of a clothing store. He and Solomon—his student at the time—felt there was an opportunity to open a bigger, independent space where more golfers could work on their craft. With additional co-founders Nora Dunnan and Katherine Solomon jumping in to help, the concept officially launched in mid-2017.

Five Iron’s name comes from its first location in Manhattan, a 3,500-square-foot unit on 5th Avenue in the Flatiron District. The brand has since expanded to more than a dozen locations across New York City, Baltimore, Philadelphia, Las Vegas, Pittsburgh, Seattle, Washington, D.C., and Chicago and one international outlet in Singapore.

The most recent opening came in Chicago’s Lincoln Park neighborhood, which comprises 13,150 square feet, 11 TrackMan simulators, and a full-service bar and restaurant. Later in 2022, Five Iron plans to open in Boston, Indianapolis, Cincinnati, Brooklyn, Philadelphia, and two units in Detroit. All of those will be corporate locations. In a few months, the chain will open its growth to franchises.

The concept aims for 12,000–25,000 square feet, depending on landlord interests, ceiling heights, and real estate availability.

“I would say there's no there's no magic to it really,” Solomon says. “I think that we look at a bunch of factors, but it's really hard. I mean in some ways we feel like we're inventing a four-wall concept. So it's not as if there's like a comp or a perfect thing, but our general philosophy is we want to go the best parts of the best cities in the world.”

Growing in an inflationary environment and labor shortage doesn’t make it any easier. Solomon says construction costs twice as much, and locations that took eight months to build now require 14–15 months. One spot could have everything completed, except for a piece of HVAC equipment from China, or missing parts from the walk-in cooler and the exhaust.

The Five Iron team orders as much as it can ahead of time and rents storage units, but inevitability, the process remains tricky, Solomon says.

“We're really looking for landlords that want to work with us and see us as an amenity in some ways to either their area, or to their commercial building where they want to be the best amenity ever for an office space,” the CEO says. “So if you have a multi-unit office building, we’re pretty good tenants to have in the basement or if you’re residential looking to monetize the building, we can do that and we pay rent. I think we have that advantage.”

Wherever Five Iron may expand, Solomon says the objective is same as it was when the chain started five years ago.

And that is to create a passion for golf that’s so infectious that someone’s kids or spouse falls in love with the sport, as well.

“All of a sudden, you're creating a whole new generation of people that play golf in a sport that has historically been very hard to get your foot in the door and get involved with,” Solomon says. “I hope it's our legacy and our goal and vision here.”

Another Broken Egg Dials In as Growth Heats Up
Fresh Vine Wine Partners with True Food Kitchen
Scofflaw Brewing Co. to Open at The Cotton Companies in Columbus, Georgia