First Watch earned a record-breaking $750.7 million in systemwide sales in 2021.

First Watch isn’t the best representation of how the casual-dining industry trended toward the end of 2021—and that's a positive.

While fellow public chains like BJ’s, IHOP, Denny’s, and Red Robin saw a noticeable dip in sales in Q4 because of the rise of Omicron and labor shortages, First Watch’s same-store sales lifted 20.6 percent against 2019, which was a sequential improvement from Q3. Traffic also increased 6.1 percent in the quarter versus two years ago.

The 435-unit breakfast chain returned to positive traffic in March 2021 and hasn’t looked back. It earned a company record $750.7 million in systemwide sales in 2021, good for a 76.1 percent increase year-over-year and a 34.4 percent rise compared to 2019. The company high mark was accomplished without any menu price increase for the whole year.

First Watch also opened 31 units in 12 states last year, following up the 42-store performance in 2020. Only four restaurants closed, including the planned shutdown of a corporate outlet nearing the end of its lease term and the termination of an agreement with a franchisee who owned three stores.

That’s not to say the brand is completely immune. Cost inflation increased more than 11 percent in Q4 year-over-year. Food and beverage rose about 140 basis points and labor increased roughly 20 basis points quarter-over-quarter. For 2022, First Watch expects between 10–13 percent commodity inflation and 8–10 percent for labor. Restaurant margin is trending around 18 percent, which is a percentage point lower than usual.

In response, the company took 3.9 percent pricing in January, and believes it has more to play with later in 2022, if necessary. Meanwhile, customers have not appeared to push back, and same-store sales grew more than 29 percent through January and February.

“I've been with this organization for nearly 16 years now. While we've always executed at a very high level, I don't think I've ever seen our teams executing like they are today in every First Watch, in all 28 states where we operate,” CEO Chris Tomasso said during First Watch’s Q4 and 2021 earnings call.

In 2022, First Watch projects comps growth in the high-single digits, positive traffic, and openings of 30–35 company-owned restaurants and 8–13 franchises. About $60 million to $70 million will be spent on new store projects, planned remodels, and in-restaurant technology.

If the concept were to achieve the high end of that unit growth range, 48 stores, it wouldn’t be record-breaking. Before the pandemic, First Watch once opened 60 locations in one year. But the breakfast restaurant is banking on that mark falling sometime in the future, with a goal of 10–12 percent annual unit expansion and surpassing 2,200 U.S. restaurants. 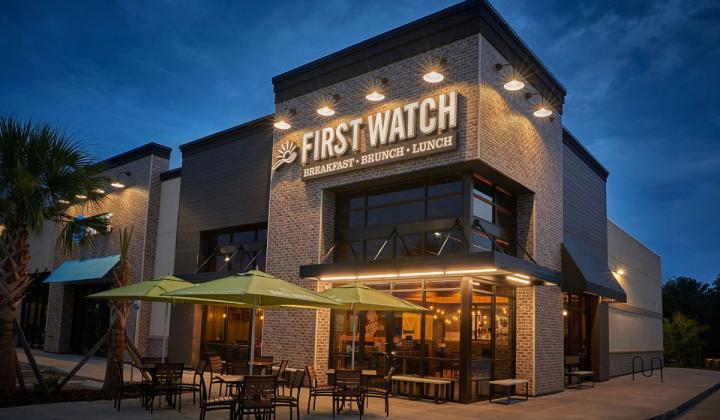 First Watch primarily searches for endcap spaces, but the chain opened a number of retrofitted standalone spots in 2021.

As for this year, Tomasso doesn’t expect the macroeconomic environment to impact the company’s cadence of restaurant openings. Building costs have risen 8 percent, meaning an additional $75,000 per restaurant, but the CEO views this as manageable and still well within return on investment.

The real question, Tomasso says, is with supply chain, but he adds that his team has mitigated those obstacles, as well. He also notes First Watch has 40-45 restaurants in various stages of development to back up its 2022 projections.

“If we start to see one running into some delays, we can accelerate another one in order to hit those opening dates,” he says. “That's why we feel confident about it.”

The 2021 class achieved $2 million in annualized AUV, which is 11 percent higher than existing company volumes. That’s mostly because newer stores are able to serve more demand with larger, enhanced patios, indoor and outdoor bars, to-go entrances, and double-make lines to support off-premises, a business that earned $34.4 million in sales in Q4, a slight increase year-over-year.

Historically, First Watch moves between 3,200 and 3,600 square feet, but the chain is now seeing spaces of 4,000 to 4,500 square feet. Tomasso says the brand is having much success finding these bigger spots because the daytime-only hours are beneficial to developers.

“We're able to fit into a mix in a center that is appealing to the landlord, but also allows them to optimize their space,” the CEO says. “So that's one unique aspect of putting us in the center. And landlords are starting to recognize that and have recognized that for a number of years—that we’re a nice complement. And we get their centers open earlier in the day, which they like. So we have not had any issues finding sites. That again is one of the great benefits of this daytime-dining segment that we lead.”

First Watch usually opts for endcaps with as many glass windows as possible for natural light. In 2021, however, the brand opened quite a few standalone stores that were second-generation builds; some of them even came with their own to-go area. The chain currently isn’t doing any ground-up leases.

The brand takes a three-pronged approach to growth. One is filling core markets where it’s been for decades, like Orlando, Dallas, and Kansas City, and another is new markets, such as opening in Chicagoland last year. The third part is emerging markets, or areas where the chain has been a couple of years and just getting started—Detroit and New Jersey being two examples. 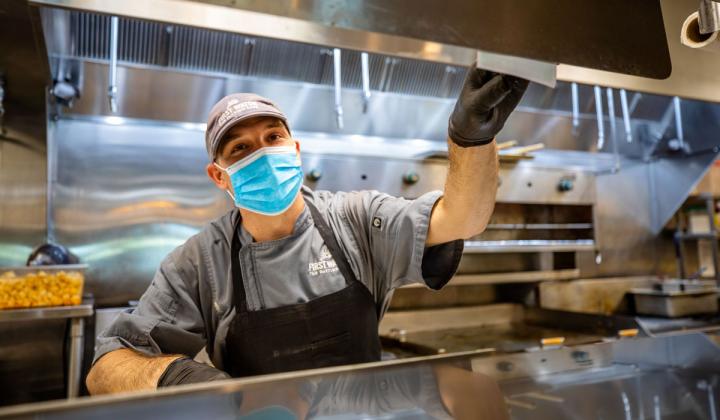 The breakfast chain is in the process of launching a kitchen display system to help simplify operations for employees.

The breakfast concept has the necessary staffing levels to fill these new stores, too. Tomasso says First Watch’s management turnover is about 30 percent lower than the industry average. At the start of 2021, there were about two managers per restaurant, but the company ended the year with 2.6 per stores. Thus far in 2022, that level has risen to 2.7 per unit.

There are 124 managers prepared to take on general manager positions for upcoming new restaurants.

To improve working conditions, First Watch is in the process of rolling out a new kitchen display system to simplify operations during peak sales hours. It’s in 20 restaurants and should be installed in more than half of company-owned stores by the end of this year.

Tomasso would prefer the launch to go even faster, but there are limitations with equipment, particularly computer chips.

“I went into one restaurant that we're testing it in the other day, and we have a long-time cook there, and I asked him how he liked it and his answer was to just give me a hug,” Tomasso says. "From that standpoint, we know that if we can make their lives easier, we can retain those folks longer, and it also helps us with hiring. Obviously, there's the quantitative benefits to that, with improving throughput and improving the customer experience. But really our focus is on improving the efficiency in the back of house. It's really checking those boxes for us.”

In terms of consumers, First Watch is leaning into its seasonal menu strategy, an initiative that mixes about 20 percent and sees guests paying more for premium proteins and ingredients.

Additionally, the brand’s alcohol program, launched in 2021, is now in 185 stores. By the end of 2022, it should be in 305 restaurants, or more than 70 percent of the system. Tomasso says the beverages are incremental with accretive margins, and doing so without much marketing effort.

From 2013 to 2019, First Watch experienced 28 straight quarters of same-store sales growth, and the concept is bullish on breaking that record as it continues to take market share.

“We're just going to grow behind great people and continue to provide opportunities for them to advance in their careers and help us with our growth. We've got aggressive plans for 2022 beyond, and we're well on our way to achieving them,” Tomasso says.