First Watch is Winning Over Customers with Trust

When the demand economy faces pressure, consumers generally button up. They don’t cut spending altogether, but they do hedge their bets, First Watch CEO Chris Tomasso said. And that’s been on the mind of First Watch from COVID’s initial rattling through its recovery and into the present view—an inflationary jigsaw that’s dragged traffic across the industry.

According to Revenue Management Solutions, October restaurant traffic was down 2.6 percent, year-over-year, and slightly negative compared to September. Basket size declined 4.6 percent versus the year-ago period (it was negative 4.1 percent the previous month). Meanwhile, sales were positive at 7.6 percent, thanks to average price being 15.8 percent higher, year-over-year. So the gap between price and top-line gains reflect Tomasso’s point: that customers, by and large, are coming to restaurants less often.

In some spots, they’re also curtailing spend. The September median check count by restaurant type decreased an average of 3.4 percent when compared to August, per Lightspeed, but the most significant decrease was found in fine dining (negative 5.42 percent) and fast casual (negative 6.49 percent).

And you can see in the charts below from YipitData how economic conditions have pushed consumers toward brands they associate with value. 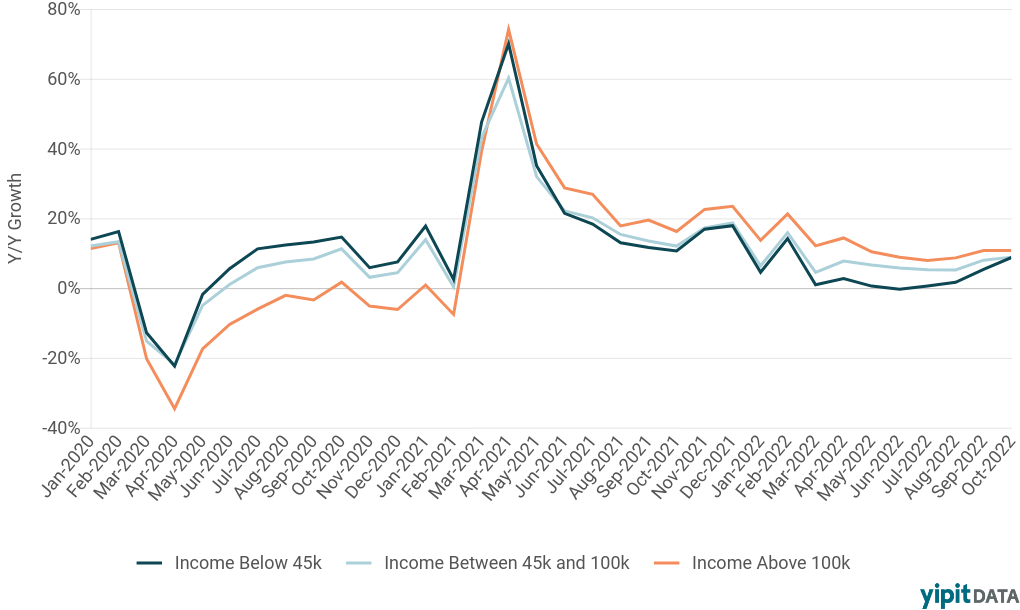 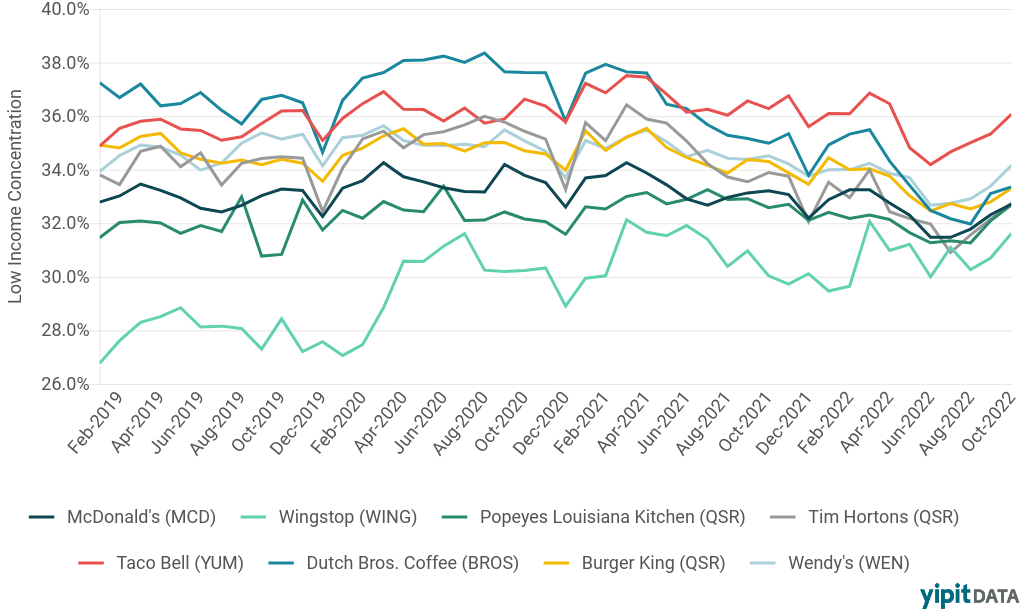 An element fueling movement is grocery inflation, which continues to outpace restaurants. Additionally, it’s proof consumers won’t fully give up restaurants when wallets tighten; rather they’ll look to reallocate dollars—trade down or place their money where they feel the value is.

“They don’t want to risk their dollars when they are being more decisive about where they go,” Tomasso said. “So, that, and the audience that we appeal to the fact that, breakfast and brunch continues to be a growing daypart and it is an experience where people feel like they can splurge a little bit. And they are able to do it in our restaurant at a very reasonable price point.” Starting in the fifth week of Q3, First Watch’s sale benefited from a menu price increase of roughly 3.9 percent.

In nearly every topic and trend mentioned thus far, First Watch has been an outlier.

Notably, though, First Watch’s comparable traffic grew 3.7 percent in the period and is 7 percent better than pre-pandemic marks.

“We know that very few brands out there are generating traffic-driven growth in this environment,” Tomasso said.

September marked the restaurant industry’s seventh consecutive month of traffic declines, according to Black Box Intelligence. In Q3, the sector was down 4.6 percent, leaving 8.3 points of separation between First Watch and the broader field.

Year-to-date, First Watch’s same-store sales are up 17 percent and its traffic 10.6 percent.

Throughout recent months, Tomasso said, internal data and external sources continue to show guests recognize the brand’s proposition and dedication to core value over discounting. Insights noted First Watch maintained a high rating related to food quality and health and wellness. And in addition to appealing to a high-income user, there’s been a balancing out of its customer base with growth among millennial and Gen Z diners, who now comprise a majority of First Watch’s heavy users.

Tomasso said growth in younger segments is, “undoubtedly,” tied to First Watch’s increased relevance and ability to deliver on its promise. Those demographic cohorts have the highest stated likelihood of increasing usage at restaurants, especially during breakfast. It’s a data point he believes bodes well for whatever economic turmoil awaits. “In an environment where consumers are nervous about inflation, breakfast and lunch at First Watch is an affordable luxury and an appealing alternative to more expensive meals like dinner with our elevated and on trend menu made with fresh, high-quality ingredients at a per person average just under $15.50,” Tomasso said.

The chain’s alcohol program is also now live in 83 percent of the system. First Watch expects it to cover the fleet by the end of next year, at the latest. “We think it’s a traffic driver and we are really looking forward to innovating around that platform once we get it rolled out,” he said.

Another trend First Watch has bucked, as RMS’ data uncovered industry-wide, is guests managing check. They’re not ordering fewer items when they go to First Watch. Beverage attachment is up. Guests are sampling premium LTOs and climbing the menu ladder. “All the signs that we are seeing are positive,” Tomasso said. “And we think that’s because of the focus that we place on just delivering a great experience for both our team and our customer during this time. We believe that as we move further into this economic environment that the strong will get stronger. So, we are really focused on within our four walls and making sure that we deliver a tremendous value and an incredible experience and I think performance in our traffic has shown the dividends there.”

The aim is to build traffic through trial while also increasing frequency of core customers. “Our industry research has seen that search is on [for value] for restaurants,” CFO Mel Hope added. “Versus 2019, we think consumers are being less promiscuous with their dining dollars and so they are sticking more to what they know and trust. We’ve been called out as a restaurant that people can trust.”

Back to operations, First Watch, in Q3, returned to full management staffing for the first time since before COVID. It’s an important note as unit expansion continues to surge and the brand works to train and staff new units, which are producing average-unit volumes of $2.2 million, better than the system average.

First Watch opened 11 locations last quarter and projects another 17 in Q4. That would bring its full-year total to 44. There are now 459 First Watch locations (356 company-owned and 103 franchise-owned) across 29 states.

Inside units, First Watch continues to add kitchen display systems. Tomasso said they streamline onboarding and training, for hourly and management, and are active in north of 300 restaurants. KDS should be in every company-owned unit by early next year, with franchise restaurants layering them in next year as well.

Hope said the KDS, while still in their infancy, are helping shed light on different operational elements. Perhaps food is being prepared faster than it’s being sent to tables. The immediate gain, however, comes from simplifying complexity based on a call verbal system. In other words, the kitchen becomes a much quieter place.

“As a consequence … it opens up to the ability to hire more back-of-house people who come from systems that already have a KDS and a reader system, and they’ve already trained on it,” Hope said. “… So just by increasing the number of qualified applicants that helps us to deal with turnover better or fewer training costs.”