First Watch Has a Growth Plan, and it's Sticking to it

For the past few years—in the face of a historic global pandemic—First Watch has achieved a level of development that’s unmatched by most in the casual-dining industry.

In Q1, the concept debuted seven units across five states and seven DMAs, including St. Louis, Miami, and Pittsburgh. Each of them are achieving annualized sales that are above AUVs of existing restaurants. At least eight outlets are projected to open in the second quarter. The long-term goal is to open 2,200 restaurants across the U.S, and the chain has filled about 20 percent of that; at the end of Q1, the brand had 441 stores (346 company-owned and 95 franchises).

The development team is seeing cost increases, but it’s nothing they haven’t been able to manage, said CEO Chris Tomasso. In terms of competition for these sites, the executive pointed toward First Watch’s longevity in core markets and relationships it’s been able to leverage.

Given those strengths, and the fact that new restaurants are achieving third-year sales in their first year, Tomasso said there’s good reason to be confident in First Watch’s upcoming growth strategy, no matter the inflation or supply chain delays. It’s also important to note that as the brand opened seven stores in the first quarter, the company maintained its average of 2.7 managers per restaurant, thereby keeping a pipeline of leaders that are ready for general manager roles at future units.

“As far as acceleration goes, again, we're sticking to what we put out there for our growth algorithm on new restaurant growth,” Tomasso said during the chain's Q1 earnings call. “And, again, just feel very optimistic about our ability to achieve that.”

First Watch’s same-store sales grew 27.2 percent year-over-year and 26.1 percent against 2019. Traffic lifted 21.9 percent versus 2021 and 3.4 percent compared to three years ago. In March, the chain experienced a surge in sales that boosted its restaurant-level operating margin to 19.6 percent, exceeding expectations. Dining rooms have recovered to 90-92 percent of pre-COVID levels, and off-premises maintained a mix of 22 percent.

The chief executive attributed new store success to continually evolving the prototype with elements that enhance the customer experience, including a much larger, more visible patio, indoor/outdoor bars, and garage doors that open up to the outside. Tomasso said First Watch is grabbing sites at or near trade area epicenters, which is not something it was achieving 16 years ago when he first joined.

He also praised the chain’s ability to use digital marketing to build anticipation.

“I think people now are more familiar with our brand,” Tomasso said. “And so, there's an excitement level that comes to us opening in a market that maybe wasn't there 15 years ago, and I think we've earned that over all these years. And I think all those elements, not to mention our great training teams and folks that we send to the restaurants to help open them, all of those things are what is really leading to the success that we're seeing there.”

Much of the passion is coming from younger consumers, a trend that’s been in the making for several years, Tomasso said. Part of it has been fueled by First Watch’s menu innovation, like the Purple Haze juice, which was in so high demand that it was recently added as a permanent menu item. Additionally, all restaurants in the system have been remodeled to a modernized “urban farm” design.

“When you look at what our restaurants look like going forward, all of our new restaurants that we built, but even the ones that we were going back and remodeling and bringing to that same look and feel, we see an impact,” Tomasso said. “So, I just think we're broadening our appeal, and we're basically filling the pipeline with the next generation of First Watch customers because of the actions we've taken.” 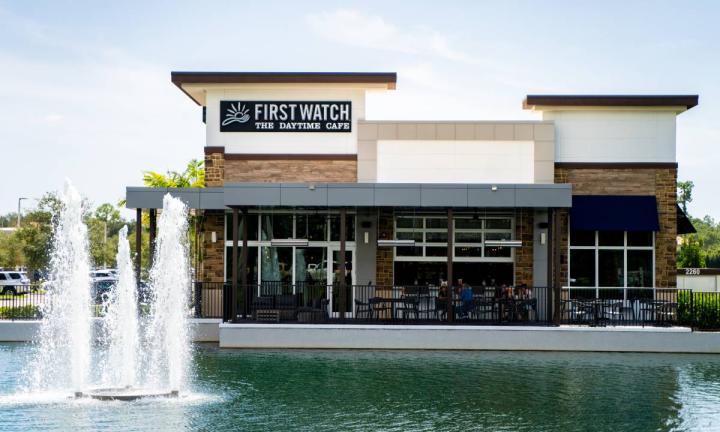 As well as sales are progressing now, First Watch believes there’s capacity to do more, especially with its kitchen display systems. Every new company-owned restaurant opens with one installed, and the chain is continuing to incorporate the system into existing stores. More than 65 locations have the technology, up from 20 about six weeks ago. The goal is to have kitchen display systems in more than half of corporate units by the end of 2022.

“The benefits where we have it in the restaurant—so we're already realizing [benefits]—are just in terms of simplifying the back of the house, operations,” CFO Mel Hope said. “And the teams just enjoy some efficiencies of having a more predictable flow of food prep and stuff and what the KDS systems are really used for in terms of helping them get things served hot and timely. So, we're already benefiting from those. But as the cohort grows, we should be able to tease out some statistics.”

First Watch began the year by taking 3.4 percent pricing after not doing so in 2021. The brand believes it has more pricing power in case another hike is necessary later in the year.

The company is seeing continued cost increases in its market basket and fuel surcharges associated with its deliveries; as a result, commodity inflation is projected to be 10-13 percent in 2022. Labor, which was at 32.3 percent in Q1, is expected to land at 34 percent by the end of the year.

“There's no really one metric that's a trigger point for us,” said Tomasso, describing how the company balances pricing and value. “Probably every restaurant company evaluates pricing, constantly based on margin, and we certainly look at it very closely. So, as we go through the year and we look closely at what our actual experience is and where we have pricing needs or inflation that we're not offsetting, then we'll constantly take a look at it and reevaluate it. But we did have a very good first quarter, and I can just tell you that we constantly look at this.”