Fresh off a championship victory, NextGen Casual Andy’s Pizza is all about in-person dining.

After debuting in 2007, the event has transformed into the largest pizza-making competition in North America, attracting hundreds of the world’s best pizza makers annually. Brown looked every year to see who came out on top, but in 2021, he wanted to see his own name on the list.

He grabbed balls of dough from his restaurant, placed them in a Styrofoam cooler, and hopped on a plane to Las Vegas to compete in late August. Once Brown arrived, he was welcomed with what he describes as a “super intimidating” atmosphere. Nearly 100 competitors around him were decorating their pizzas with specialty dough, exotic toppings, expensive olive oils, and aged cheeses, while he set up shop with one dough ball, a bag of shredded whole milk mozzarella, and a can of tomatoes to make his restaurant’s cheese pizza. 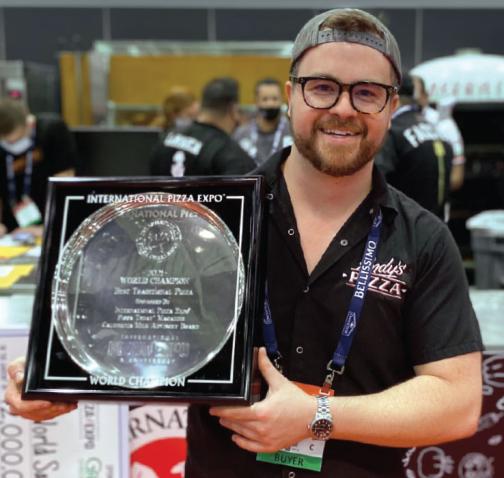 “I’m thinking to myself, am I really making the right call?” Brown says. “Should I really just make a cheese pizza? At the end of the day, my decision was based on when anybody in the industry goes to a new pizzeria, you order a slice of cheese. That’s the ultimate test of the skill of the pizza maker. We went with our classic cheese pizza, and as soon as I pulled that pizza out of the oven, I had a feeling that we would win.”

It’s a cheese pizza with dough that’s 72-hour cold-fermented and cooked in a stone deck oven, which results in a crispy, soft, and chewy texture with “beautiful blistering” in the crust. Brown says the product leaves people feeling light, yet satisfied, unlike many of the larger chains.

Judges at the International Pizza Challenge agreed and awarded Brown first place overall in the traditional division and first in the Northeast region. Word quickly spread about the brand’s championship performance. Restaurant sales doubled and stores had to limit online ordering.

While a competition might seem like the ideal venue to turn out an extravagant, time-intensive pizza, Brown is proud his winning pie is the same one Andy’s Pizza turns out every day.

“I think it’s different when you win with something that you serve in your stores,” Brown says. “The entire team knew that’s our cheese pizza: ‘I made that this morning. I made that tonight. I put that on the slice line today.’ That’s the world’s best cheese pizza for 2021, and it brought a smile to everybody’s face.”

The journey toward world champion can be traced back to 2017 when Brown started the frozen pizza company Eat Pizza. The company sells to roughly 200 Whole Foods and a number of other chains in the natural artisan market.

About a year later, a relatively new pizzeria shut down in a desirable area, giving him an opportunity to enter the retail business. The New York–style Andy’s Pizza first opened in December 2018 at Tysons Galleria, an upscale shopping center in McLean, Virginia. The restaurant sells pizza by the slice and freshly baked whole pies.

“Tysons Galleria is an absolutely A-class mall with top-tier tenants, and it legitimized us on day one,” Brown says. “I didn’t grab a carryout [location] off of a side street. We were in an absolute top-notch property that’s nationally recognized for our first location.”

Throughout the pandemic, the chain built its audience through door-to-door marketing, with staff knocking on apartment doors and distributing flyers. Prior to COVID, the company never planned to offer delivery because of how travel changes the taste of pizza, but governmental restrictions forced its hand. The concept optimized its process to improve portability, and business took off.

“I was extremely grateful that I was in the pizza business and not the steakhouse business,” Brown says.

Andy’s Pizza, which hasn’t raised any funds and isn’t backed by investors, has since expanded into multiple neighborhoods throughout the D.C. area. While the original Tysons Galleria location is a standalone business, the brand has found success in piggybacking off existing concepts. For example, in D.C’s Shaw neighborhood, Andy’s Pizza has a carryout location beside the bar concept Echo Park; across from Nationals Park (home of the Washington Nationals), it has an outpost inside Atlas Brew Works; and in the Noma neighborhood, it operates out of a Streets Market grocery store.

The growth strategy is quite simple—continue to fill in neighborhoods across the nation’s capital. Although pizza by the slice fits with office lunches, Brown says Andy’s Pizza has shied away from central business districts because of how much COVID restrictions affected those areas. Also, Brown is D.C. born and bred, so there are no plans to place the chain outside the D.C., Maryland, and Virgina (dmv) market.

“We plan on being the pizza of the DMV and having a really tightly organized corporate structure that delivers the best product we can at every store with an extreme focus on quality control and customer experience,” Brown says. “I think what happens when you go three states away, you don’t have that same team.” And when you don’t have the founding team on the ground, he adds, it can become more difficult to maintain quality.

“We want to offer all of our guests a consistent, great experience with top-tier ingredients and through true craftsmanship when it comes to the pizza,” he says. “We want to be a reliable, open-in-a-snowstorm, dependable, neighborhood spot.”

Brown’s passion to become known throughout D.C. can be sensed by most, even The Washington Post.

In February 2020, a food reporter wrote an article about six pizza chains falling just outside his list of top 10 pizzerias in the market, and Andy’s Pizza received a mention. But the piece came with sharp criticism. The food writer claimed, “The guy has the passion. Right now, he just doesn’t have the consistency. I would have included Brown’s white pizza on my original list, but the last time I ordered it, the slice had clearly sat out too long. Time had had its way with it.”

Brown took the feedback in stride but also recognized that it needed context. Reheated slices and delivery, while an important part of business, are not what earned Andy’s Pizza its newly minted world-class reputation.