Bartaco's QR dining has been a pandemic hit.

The brand has a new service model and revitalized approach to growth.

When bartaco was created by Scott Lawton, Andy Pforzheimer, and Sasa Maher-Batuz more than a decade ago, the concept initially didn’t include servers. They placed ordering cards on each table, not unlike what you see at sushi restaurants, and asked guests to check off choices and hand them over. There were food and drink runners. Bussers. But not a dedicated order-taker in sight.

Eventually, bartaco’s growth challenged the structure, and it added waiters. But still, they patrolled larger-than-normal sections since the cards remained an essential feature of bartaco’s ordering experience. Given the jigsaw-like nature of piecing tougher a meal at a small-plates restaurant, guests found it easier to visually order than do so verbally.

The fact this endured proved advantageous for bartaco in the after-glow of COVID-19. Simply, the chain’s customers were trained to order without a waiter.

It empowered Lawton, who had returned to the brand a month before the pandemic, to reimagine bartaco’s service model. The emerging chain shifted to QR dining, first with Olo and then with OneDine. Customers could join a waitlist via bartaco’s app, or call in. They receive a text their table is ready. Once there, they use a mobile device to scan a QR code where they can order and pay. The brand anchored its virtual host system with Wisely.

Importantly, however, the pivot brought forth labor questions. Could bartaco piggyback COVID reactions into a more efficient model? Lawton thought so. The brand became more team-like in its approach. It started to pool tips for the entire restaurant, including the back of the house, and put all staff on minimum wage instead of a taxed tip wage.

Firstly, to the earlier point, the switch proved seamless for guests. QR dining is, in essence, ordering from a card, just on a mobile device. And the cards themselves haven’t left. They remain for those who don’t want to use their phone.

“The goal is that the customer doesn’t feel like service has been compromised in any way, shape or form,” Lawton says. “If anything, they need to feel like being able to order with this makes their life easier. It needs to be something that is frictionless and easy and they’re still greeted when they walk in the door. Their table is cleared, and when they put the dragonfly card up someone is there if they need to answer a question. We want to give all the same feelings that you have in full service.”

So the 22-unit brand was uniquely designed for the shift, from a guest-facing angle. But how did the transformation play out on the backend?

Lawton calls results “really incredible,” as bartaco shaved 5–6 percentage points off its labor pre-pandemic and ran 30 percent store-level EBITDA, despite being down 20–25 percent in sales, year-over-year. The average income of employees is now between $23–$25 an hour, including dishwashers, Lawton says.

It’s a sizable change from before, when kitchen employees were essentially making about $15 per hour. Narrowing the gap between front- and back-of-the-house workers improved turnover and the quality of cooks and other kitchen staff, Lawton says.

For servers, it definitely changed how bartaco approaches the position. The move, naturally, capped earning potential a bit but also stabilized it. There are camps on both sides whether that’s a positive or negative thing. Yet Lawton says it’s become more of a recruitment adjustment for bartaco than anything else.

“So we’re looking for staff that is more, maybe not career servers, but people who are bright, energetic folks that understand team play and are excited to make a very predictable and great income,” Lawton said. 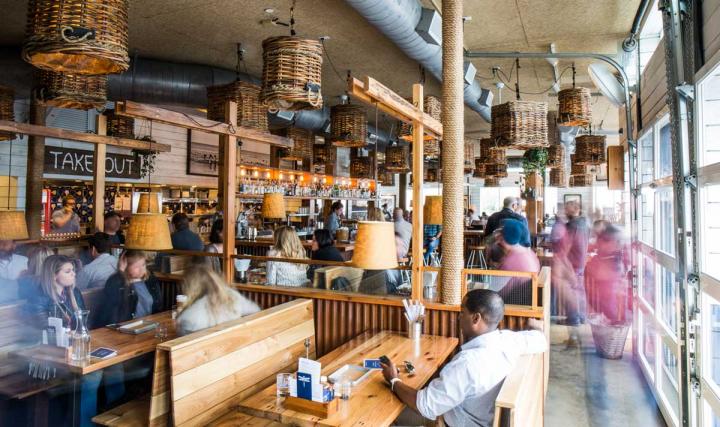 Bartaco was once touted as having the potential for 200–300 domestic locations. CEO Scott Lawton believes that's still the case.

Bartaco had to deconstruct its system, and when you break it down, it starts to feel familiar to the company’s early goals. Before QR dining, bartaco used a typical waiter system where they’d be in charge from beginning to end. Now, it’s more all-hands-on deck. There are different people performing different parts. And they share tips at the end.

It could prove beneficial long-term, too, as President Joe Biden attempts to push the country toward a $15 federal rate. “I don’t want to pay tax-tipped wage because that exposes me to all those issues,” Lawton says of regulatory changes on the horizon. “The idea is pay full minimum wage and you’re not exposed. We can manage $15 an hour under this new construct. Because we can run the dining room much leaner.”

While the transition appeared a logical step for bartaco, getting there wasn’t simple. Lawton says OneDine dedicated a large part of its engineering team toward bartaco and a “couple of thousand trouble tickets later, we have something baked.”

“We had to kind of go through this process of really getting it working, which under the cover of COVID we were able to do. So it was truly a partnership to try to get that working,” Lawton says.

He adds Wisely’s virtual host stand enabled bartaco to communicate with customers. And the data gleaned is how it figured out who its core guests were, and if they’d be willing to adopt QR technology.

Bartaco plans to continue the model out of COVID—both QR dining and the labor changes. In fact, Lawton believes the brand can unlock growth as dine-in returns and bartaco finds itself a more efficient, profitable organization. Not to mention, one that’s built a healthy off-premises business that was just 5–7 percent of sales pre-coronavirus. Today, it’s 30 percent.

The deal was a head-scratcher in some ways, but DFRG’s interest in bartaco was easy to spot. The company said then it believed bartaco, 16 units wide, could spread to 200–300 domestic restaurants. Activist investor Engaged Capital LLC, who would go on to press DFRG’s decision-making, labeled bartaco a “blockbuster concept” with “outstanding restaurant-level EBITDA margins of 28 percent,” where the “sky is the limit … if the growth strategy can be properly executed.”

Lawton left after the deal. He says the DFRG experience turned out to be an opportunity “to see some of the things we shouldn’t do.”

“It was a setback,” he says. “And it was a great chance for us to reset and figure out what the brand needs going forward. I think we saw under DFRG some erosion of culture, as well as complication of process without reason.”

It turned out to be a relatively short chapter, though. In summer 2019, Del Frisco’s was sold to L Catterton as part of a $650 million scoop. The private-equity giant spun off Del Frisco’s Double Eagle Steakhouse and Del Frisco’s Grille to Landry’s. It kept bartaco and Barcelona Wine Bar and decided to allow the latter to operate on its own.

Originally, L Catterton planned for bartaco to operate under the umbrella of polished Mexican chain Uncle Julio’s. “But they realized that bartaco needed to have its own culture and it needed to spread its wings,” says Lawton, who returned after the second deal. “And that maybe being headquartered under another old brand that’s bigger based out of Texas might be more of the same of what happened under DFRG. So they really placed a bet on us becoming independent and focusing on us, and I think that’s really paying off.”

“We’re really seeing incredibly strong guest engagement. The brand is revitalized. And we have a pretty clear path going forward for growth now,” he says.

In terms of an ultimate figure, Lawton thinks bartaco can still get to where DFRG believed it could. And especially now with a refined labor model built for scalability.

“We’re bracing ourselves,” Lawton says. “We think we’re going to be hitting new levels of volume once the pandemic subsides. You ask anybody what are you going to do after you get that second shot and most people say they will be at a restaurant, or at a bar, or on a flight to Hawaii. The service industry I think is really going to pop after this.”

“Unfortunately, we’ll have more market share at this point,” he adds, referencing industry closures. “And that’s a sad reality but it is going to contribute to our growth I think. At least in the short run.”

Bartaco’s off-premises gains should provide a lift, too. The brand has been selling taco kits and packs. Bartaco created a playlist on Spotify for customers to listen to as they try to recreate the experience. Tacos, loaded and ready to go, simply don’t travel well, Lawton says. So they break them apart and offer packages for guests to reheat when they get home.

This removed pressure from the kitchen as well. “With 30 percent of your takeout sales, even at 50 percent capacity in your restaurants—that’s a lot of pressure trying to put the other orders and bag them and get them out in what’s a traditional kitchen that’s built for an a la carte location. But now we can scoop and serve it in these packages that we can make about three times faster,” Lawton says.

And life after COVID?

“I think everyone has learned how to order food from their phone now. Everyone has been conditioned to eating a lot more takeout than they used to,” he says. “I think brands that are experiential will still have busy dining rooms but brands that are not will be relegated to ghost kitchens and things like that, and probably not want to spend the same rent they were on brick and mortar. I wouldn’t want to be just kind of humdrum average restaurant doing average things right now. I would be very frightened if I was them.”

Bartaco has opened its bars, and continues to abide by regulations market-by-market. “We have three principles through COVID and it’s one, to stay connected with our customers and keep them safe, but stay connected with them. The other is to take care of our team. And the third is to be responsible members of our community.”

The Evolution of The Restaurant of The Future
Hormel Foods Highlights Growing Culinary Trends
Study: Despite Inflation, Customers are Tipping More at Restaurants