Another Broken Egg's alcohol program has skyrocketed over the past two-plus years.

Another Broken Egg Dials In as Growth Heats Up

Indulgence, innovation, and a commitment to hospitality has the breakfast/brunch franchise thinking big.

Paul Macaluso spent the heart of his first 25 years in restaurants working in quick service, everything from a GM at Taco Bell to brand president of McAlister’s Deli. Arriving at Another Broken Egg Café in late 2019, roughly four months before COVID-19 hit, he couldn’t help but ask the obvious question. What if the brand, which runs seven hours a day (from 7 a.m. to 2 p.m.) seven days a week, kept the doors open longer?

“How much more money could we make? You’re always looking to leverage your investment in the facility, rent, equipment, things like that,” Macaluso says.

Parts of the brand’s menu, chicken and waffles, shrimp and grits, and burgers, could easily translate. But the decision wasn’t based in something material.

“It’s like the old saying, ‘every year, you set yourself 10 goals, you may accomplish them. But if you set two or three, you’re more likely to actually get them done,’” Macaluso says. “It just comes to focus.”

Through the pandemic and emerging out, this is where Another Broken Egg has dug in. Versus shifting tack, the brand instead become a more efficient, realized version of itself, Macaluso says. And it invested in tech tools to enhance what guests already gave Another Broken Egg credit for. In turn, average-unit volumes have climbed from $1.5 million at the end of 2019 to $1.85 million at 2021’s exit. A good deal of that separation—like much of the industry—credits to off-premises gains, and how Another Broken Egg fundamentally altered that side of its business.

Yet also, if you go back to 2015, alcohol mixed roughly 5 percent of sales. Another Broken Egg ended last year at 15 percent.

When Another Broken Egg unveiled this focus in June 2021, it hosted a media-only after-hours event at a newly renovated store in Lake Mary, Florida. “Meet the Mixology” showcased items like Bourbon Milk Punch and a Champagne Mule.

From a recruiting standpoint, Macaluso says, it’s always been a lure, even with today’s challenges to find staffing. It lends itself to employees seeking stability and work/life balance. That includes people from other restaurants who might want to stop clocking nights. Or perhaps a person who would like to do both.

“I think we’re one of the few brands that have an opportunity where we think people can really appreciate the quality of life they can have,” he says.

A case point is the fact Another Broken Egg hasn’t had to up wages as much as some category peers hoping to entice workers. The chain will actually see industry employees willing to take small cuts in favor of the schedule. “We’re not poached as easily by other competitors,” Macaluso adds.

This conversation extends to alcohol, too. Bartenders have flocked in, he says, because they can serve and make drinks, yet, generally speaking, not take on the late-night challenges that traditionally go along with doing so. Over-served guests, for instance, and after-shift drinks on the back-end. 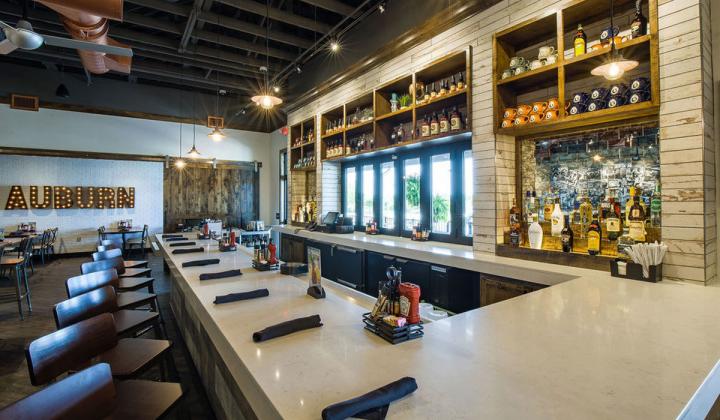 "At our place, we have a subtle difference there where we actually take care of the whole experience,” Macaluso says.

When Macaluso joined Another Broken Egg, alcohol was one visible unknown from a personal angle. He’s now on the liquor license in all corporate stores. “It’s a big deal,” he says. “It’s a whole [different] animal because of all the regulations. And so, I was like, this is kind of intense. But the way we do it, it’s all the benefits of alcohol with 90 percent less of the headaches because we’re not having to deal with all the problems that come late at night.”

Another Broken Egg’s service model in many units has bartenders run drinks to tables after servers take orders on handhelds (a system the brand has rolled in recent months that improved table turns by as much as 10 minutes during peak shifts).

Alcohol, again, although a core trait of the brand for decades, hit the accelerator in the COVID window. Why isn’t a quantifiable point as much as it’s a reflection of the consumer climate itself. Remote work extended lunch hours and let people indulge off the clock. And when customers have cashed in on pent-up demand, they’ve often treated full service as a celebratory break.

Regardless, Another Broken Egg watched alcohol sales push check and profitability to record highs. And Macaluso and company chef Jason Knoll took notice. Servers are trained to share detail on cocktails just as they do with menu items. They’ll toss out pairing ideas.

Recently, Another Broken Egg added a second, upsized mimosa option where guests can order an 11-ounce drink instead of 8.

“We’re adding more variety and flavors and innovation,” Macaluso says. “And we have many of our cafes do over 20 percent of their sales in alcohol.”

There are selections like a Brunch Blueberry Margarita: Milagro Tequila, Grand Marnier, fresh sour mix, fresh blueberries, and a blueberry rim, available by glass and by the pitcher; six different spiked coffees (one version being the Salted Caramel Spiked Cold Brew, made with Baileys Original Irish Cream and KAHLÚA with a salted caramel rim); five Bloody Marys; and seven “Brunch Bubbles,” such as the Apple Pie Mimosa, complete with Wycliff California Champagne and Simply Apple Juice. Guests can order the bubbly drinks as well as Bloody Marys by the pitcher as well.

Pitchers of Bloody Marys and mimosas soared 20 percent in 2020.

Of late, Another Broken Egg started to bring alcohol more onto the food side. A seasonal launch was the Rum Cake French Toast, which features French-toast style spiced rum cake with pecans, topped with grilled fresh pineapple, berries, and a spiced rum butter glaze. Customers have to be 21 to order. Another Broken Egg suggests a pairing with its Spiked Pecan Praline Cold Brew.

It’s all an effort to further distance Another Broken Egg from a crowding field. Although the brunch/breakfast category remains relatively undersaturated compared to other segments, it has begun to rapidly fill. It sits at an enviable intersection between social dining and value. Guests can still reconnect and get an experience outside of fast food, but do so with average checks staying in the teens.

Behind First Watch’s 440 or so locations, Another Broken Egg is the second-largest category player at 81 units. There’s plenty of challengers—Eggs Up Grill (plans to open 15 or 16 stores this year after ending 2021 with 54 locations compared to 37 year-end 2019); Toasted Yolk (potential to double this year after 14–15 openings) to 52-unit Snooze and others.

The landscape makes brand recognition that much more critical, Macaluso says. Expanding dayparts and operating hours would only let complexity in.

Alongside alcohol, Macaluso says the brand is committed to staying fully full service. Servers are going to take care of guests from start to finish and throughout the ordering journey. “With some of our competitors is more like a cafeteria style, where you might order at a central location or you pay at a central location. But at our place, we have a subtle difference there where we actually take care of the whole experience,” he says.

Another Broken Egg’s tablets allow orders to be taken quickly and checked out. There’s technology testing, too, where guests use a QR code to cash out from the receipt and the server gets a notification on their tablet it’s been cleared. However, the broad idea is all of these tools connect experience rather than replace it. Servers educate and inform; it’s simply the payment and ordering process that’s cut out friction.

Another Broken Egg moved to Revel’s cloud-based point of sale—a process the began in November of last year and spread to 36 company units by mid-2022.

Before, servers had to write orders down and stand in line at one of Another Broken Egg’s central POS stations. Tickets would stack up and orders didn’t get back to the kitchen as fast.

Today, there’s up to 14 iPads for employees to enter orders, which immediately flow back. Servers can take on more tables, collect additional tips, and Another Broken Egg gets to save on the labor line.

Coupling the QR code payment option (also through Revel) with handhelds, the brand saved 200 basis points on labor. Plus, as mentioned previously, tables are turning 10 minutes quicker in some spots.

“We really want to maintain that point of differential of really that full-service experience,” Macaluso says.

All things considered, however, the menu is where Another Broken Egg is going to plant its flag, he adds. As some chains tighten their halo on health, the chain is going to center innovation around indulgence.

In recent months, franchise interest hastened parallel to these trends, Macaluso says. Naturally, it was a bit slow going out of the COVID gates, but that’s all shifted. In his first year, the chain hosted two discovery days. It’s held one a month for the past five. Recent openings include Raleigh and Morrisville, North Carolina; and Guntersville, Alabama. In April, Another Broken Egg signed three deals to open 12 stores, including a first-time entry into Maryland and further expansion into Texas’ El Paso region. The move would also quadruple the concept’s footprint in Virginia. Another Broken Egg introduced 10 new venues to its system in 2021 and could open up to 18 this calendar.

The early daypart focus factors in there, too. Operators can diversify or just take on a concept that doesn’t keep them up long into the night.

The average cafe gross sales percentage change comparison for 2021 versus 2019 was 22.62 percent. Average EBITDA from operations for Another Broken Egg’s top quartile company-run stores was 19.1 percent. Average cost of goods sold was 27.6 percent.

“Even as tough as the business is right now with supply chain and labor issues, we’re getting a lot of interest in growing the brand, which is exciting,” Macaluso says.