Agave & Rye's design threads into its new settings, whether that's a local reflection or an entirely new concept.

The NextGen Casual has a new steakhouse, drive-thru brand, and plenty of growth ahead.

Yavonne Sarber doesn’t have many misgivings about the future of dine-in. The demand is “absolutely there,” she says. Lines at Agave & Rye in the evenings, and Sarber’s new concept, S.O.B. Steakhouse, a high-ticket, “Southern Rock Tattoo style” brand, remain well over an hour.

According to The NPD Group, dine-in visits leapt 38 percent in the first quarter of 2022 compared to a 45 percent decline a year-ago. In full service, on-premises traffic rose 26 percent versus a 34 percent decline, while business outside the four walls—currently mixing about a third of category visits—slipped 25 percent after a 63 percent increase in the prior-year quarter.

In sum, “100 percent,” is Sarber’s answer as to whether or not guests are returning from pandemic habits. However, also per NPD, full-service spending was 10 percent higher in the period, reflecting lofty costs inside and outside restaurants. Sarber says there are two guideposts worth latching onto. “Just listen to the community,” she says. “More importantly, invest in your team members, and it’ll work.”

Sarber's 10-unit modern tequila and bourbon hall Agave & Rye has six openings on deck for this year. S.O.B., which stands for “Son of a Butcher,” will look to growth starting in 2023. Sarber is also working on a standalone drive-thru called Papi Jocho's Street Dogs & Cantina, which debuted in 2020 adjacent to the original Agave & Rye in Covington, Kentucky.

Last October, Sarber closed the space to expand Agave & Rye’s seating but also to reimagine the brand's model since the venue didn’t offer the bones (small kitchen, hood capacity) to grow without a complete reconstruction. She designed a drive-thru with no interior seating, just a patio, and a double lane that pulls into a single one where guests pay. Along the way, customers peer through a floor-to-ceiling window displaying a 30-foot make-line. Employees prepare food, set up like “the streets of Mexico,” Sarber says, complete with carved pork and pineapple. Guests also watch all-beef hot dogs cooked on a griddle. “Jochos,” or Mexican street dogs, are best described as street taco fillings atop a hot dog.

The first Jocho's is expected to open Q1 2023 in Ohio. “We really do think it’s going to bring an experience to the drive-thru lane,” she says. “On top of that, I think for the most part, drive-thrus are looked at processed, high-fat, high-calorie food, where this in contrast is going to be all fresh, no preservatives, all scratch, and you’ve got a lot of healthy options if you choose you want to eat healthy.” 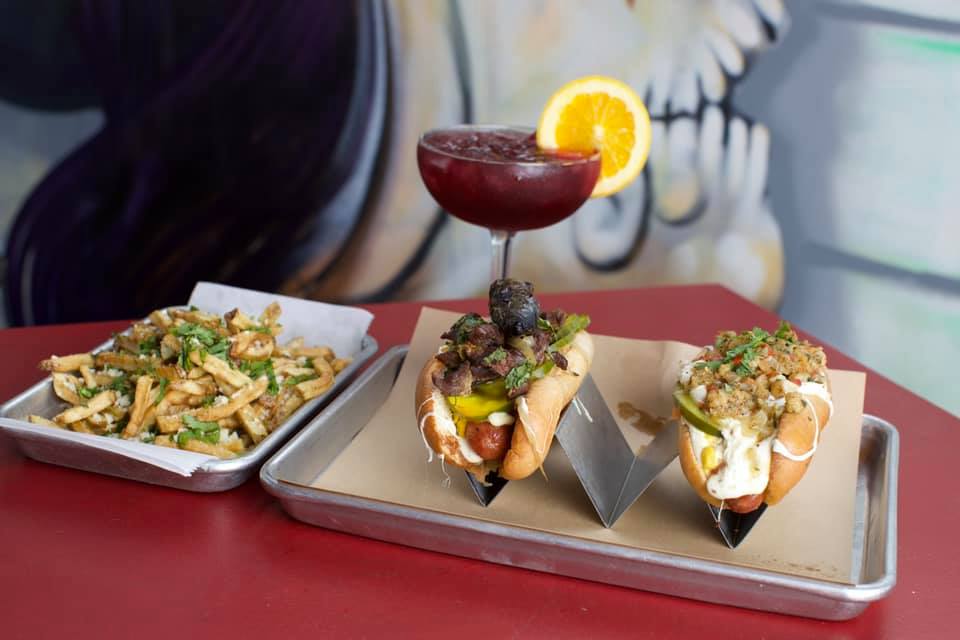 Importantly, though, this extension for Sarber’s group has internal aims, too. Once it’s been developed and proven out, which Sarber admits will likely take “a couple of years,” the “why” behind Jocho's will be to create a brand Agave & Rye can franchise to existing employees. As soon as they hit benchmarks and graduate through a program, the company will fund the franchise for them to get started.

It’s a tangible means, Sarber says, to reward and empower workers who have invested in Agave & Rye.

“The successes are all with them,” she says. “I’m just the lucky one who gets to talk about it.”

One of Sarber’s go-tos when asked about her success is, “your restaurant becomes better when the people in them become better people.”

“When we see an opportunity to hire a super star, we bring them on, it doesn’t matter if you have room at the moment, we’re a brand of culture and people so get them on board,” Sarber says. “Get them in and develop them so that they’re ready to go into the next opportunity.”

Progression has always been a A1 target for Agave & Rye. Typically, there are two to five leadership members ready to relocate as the company grows. When that happens, internal workers move up so Agave & Rye’s culture stays intact at management tiers, where it can cascade into hourly roles.

“Outside of training, of course, something that we were really able to identify—and it’s been the biggest help in our culture, bar none—is our core values,” Sarber says. “I think a lot of companies in general, including restaurants, don’t spend enough time understanding why you need core values and what they mean.” 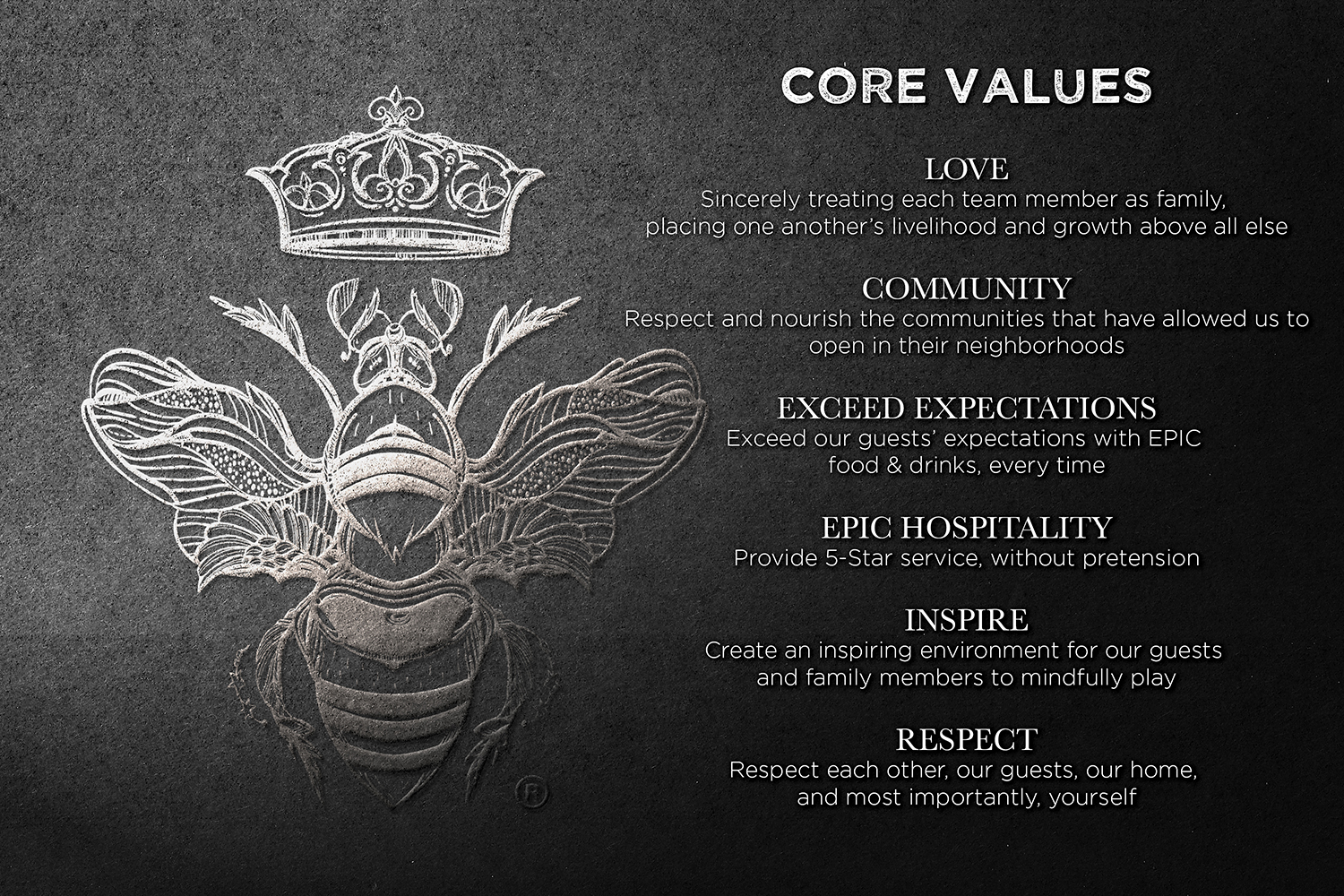 Each employee has a printed rundown of these values on them every shift. She says, as much as anything in this labor climate, it’s helped Agave & Rye make fewer “wrong-person” hires since leaders prioritize culture over CV.

It's all been critical of late for Sarber and Agave & Rye as the company spreads and creates new brands. Policies, check lists, and structural hires are elements set into place over the past year in particular. The company’s corporate arm, which it calls “The Beehive,” expanded to 11 members and now consists of roles like an IT director, operations director, and controller.

So on one level, Agave & Rye is much quicker to move now with expansion, like two Columbus, Ohio, openings (Grandview on May 25 and Short North on June 1) arriving within days of each other.

Yet Sarber isn’t losing sight of her company’s individuality, either. Her husband and Agave & Rye’s co-founder, Wade, hailed from a background in fine dining. Pre-COVID, she says there was clear whitespace in the market for high-level dining done in more accessible fashion. That was essentially how Agave & Rye, and its Jalapeño Pineapple Margaritas and truffled lobster mac n’ cheese tacos, was born in 2018. 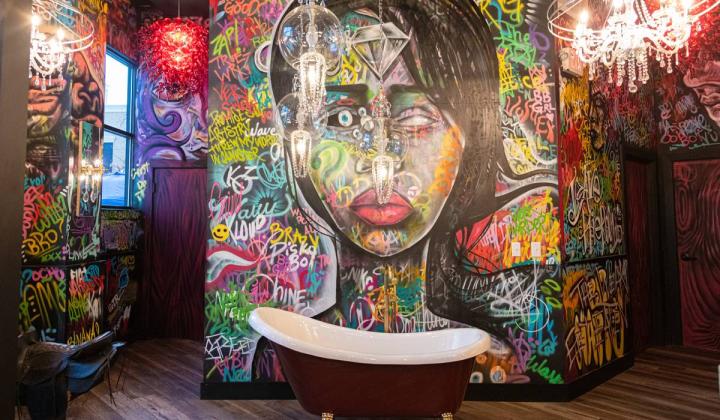 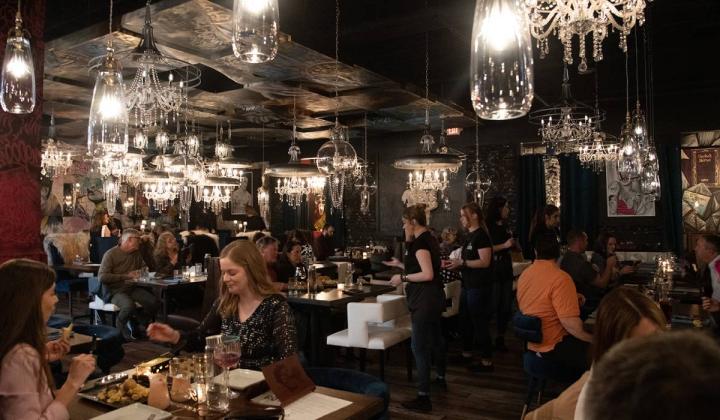 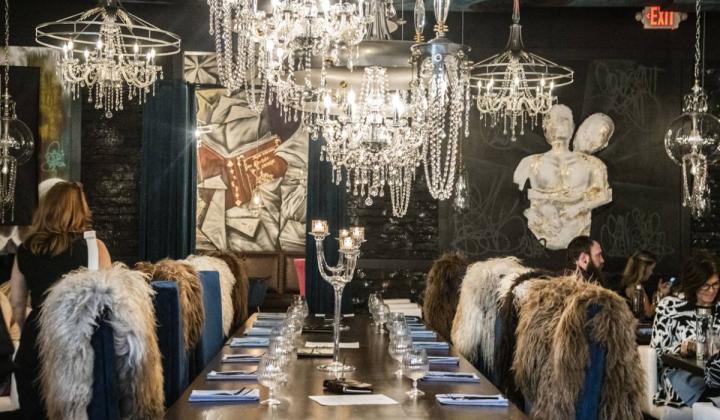 Son of a Butcher doesn't hold back on its decor, to put it lightly.

Given the brand’s success and feedback (Agave & Rye recently ranked second on the Best Of Cincinnati 2022 list for best tacos and fourth for best restaurant overall), Sarber says guests, and the landscape, felt ripe for an elevated steakhouse with premium prices, yet none of the pretention often associated with the velvet booths, heavy draperies, dark wood, and tuxedo waiters of steakhouse lore.

“We thought, well, heck, let’s maybe put together something that combined with what we know our Agave & Rye guests love and experience, and put that together with what we feel the market will embrace and we personally loved. And that’s how S.O.B was born,” Sarber says.

The fact S.O.B.’s interior walks the line between fine and street art is no coincidence. Agave & Rye laid claim to that DNA first. Sarber wants guests to recognize her overall brand as they enter new markets and states. “You can walk in and think, ‘I recognize and feel the same feel that I do in any of our establishments, even though they’re all different,” she says.

S.O.B has higher-end finishes, more lighting, and takes art to another level. There’s a bathtub in front where people pose for Instagram pics. The bar boasts real saddle stools. “We still walk that line of being slightly inappropriate and our guests seem to love it,” Sarber says. “So we’re not changing.”

Like the décor, service has to tick up to match the check as well. The training is different. As is the transition from margaritas to wine. Cocktails changed, too. Overall, however, it’s a similar message to what Agave & Rye and restaurants sector-wide heard during COVID. Today, in regard to what full-service dining has to deliver on, you can swap personal safety concerns, in some cases, with a guests’ need to justify the expense of their trip. “They can cook up quite a few things and if they can do it home why are they going to go pay for it somewhere else,” Sarber says. “You really do need to make it unique and different and make it exciting for them.”

But as many hurdles as Sarber cleared over the past two-plus years, from commodity instability to adjustments, she says 2020–2022 generated plenty of optimism for Agave & Rye and its new brands. “We found through growing in the pandemic and now as we’re coming out of it, the growth that we’ve experienced and the successes that we’ve seen in different states and different markets, it’s wonderful because we know, hey, we’re not a fluke. People love us in all kinds of areas.”