Chefs around the world are putting more plants on the menu, no longer just as inventive sides and inspired small plates—as the main event. Entrees like cauliflower steaks, elegantly sautéed mushrooms, and flavorfully seasoned legumes are leading the way.

The shift is both to meet consumer demand and address sustainability hurdles. Plant-forward menu choices, when informed by culinary expertise, can transform palates and spur the next generation of innovation, according to The Culinary Institute of America and The Harvard School of Public Health through a joint initiative called Menus of Change.

Being plant-forward isn’t necessarily about taking all the meat off the menu, according to the CIA and Harvard’s definition. For chefs leading the charge, it’s a simple shift in perception that brings vegetables into the spotlight while less sustainable ingredients take supporting roles.

“You have to stop thinking about vegetables as a side,” says Amanda Cohen, chef and owner of Dirt Candy in New York City. When Cohen opened the restaurant in 2008, her goal was always to let vegetables lead.

“I want each dish to explore as many different versions of vegetables as possible, like our brassica dish that has cauliflower, mustard, Brussels sprouts, and every version of that vegetable family, all in one dish.”

Cohen had set out to make Dirt Candy the Peter Luger’s of vegetables, and her advice to other restaurateurs for featuring more plant-forward dishes stays in the same vein: make vegetables as craveable as possible, as if they were pizza or foie gras.

“I find a lot of inspiration in seeing what other cuisines do with vegetables, like Korean or Mexican cooking. Or I look at a technique like smoking or making pâté and try to think about how to apply that to a vegetable.”

As a result, Cohen says her gateway into plant-forward cuisine wasn’t a specific vegetable, but rather the way other cuisines treat vegetables.

“When I lived in Hong Kong, it blew my mind about what you can do with vegetables and how flexible they could be,” she says. “Take a look at any of the major regional cuisines in China, or look at Chinese temple cooking, which employs really elaborate meat-free dishes. It’s a totally different approach to cooking vegetables.”

When Harden started out, there weren’t a lot of chefs focusing on plants. As a result, consumers looking for more plant-forward dining options could expect little more than a “crunchy granola” style restaurant.

“Years ago, if you had a so-called plant-based meal, you’d be in kind of a crunchy granola place with a lot of knickknacks and brown rice,” Harden says. “Now you can have a beautiful meal that’s actually made by a skilled chef—vegetables from the market prepared with care.”

But sometimes, in the restaurant business, artfully preparing vegetables can get a bad rap. Vegetables may be cheap, but the preparation can take a lot of time. For that reason, Harden says, food cost savings with plant-forward menus tend to balance out with labor.

“Everyone always says that if you don’t have proteins on your menu, it must be so much cheaper,” Harden says. “The food cost is generally, of course, way less depending on what kinds of [produce] you’re using. But the labor cost tends to be higher because there’s a lot of things to process.”

An entrée of steak and mashed potatoes with green beans takes almost no prep except to butcher the meat, blanch the beans, and make the mash, Harden says as an example. Buying vegetables as much as possible from local producers and preparing them in occasionally elaborate ways tends to take more time.

It’s that style of entrée—a protein and two sides—that Dirt Candy’s Cohen says plant-forward menus need to move away from. When it comes to plants, she says, the age-old formula no longer works.

“One way people used to steer away from vegetables as sides was to imitate the ‘meat and two veg’ format, offering a big piece of protein like tofu or seitan and then vegetables as the side,” she says. “To me, that’s kind of boring.”

Similar to Cohen’s brassica plate at Dirt Candy, abcV takes a deep dive into one vegetable with a tour of tomatoes—Harden’s personal favorite. In August, abcV’s menu featured salads of sungolds, a bouillabaisse broth over fresh shelling beans, and a chilled beefsteak tomato soup (not a gazpacho, Harden says).

In the end, diners just need to feel satisfied, so variety of flavor, texture, and taste help, plant-forward menus achieve this.

“They want food that will fill them up and doesn’t taste like someone just steamed some vegetables and put them on rice,” says Todd Gray, chef and co-owner of Equinox Restaurant in Washington, D.C. “They want thoughtful dishes and elegant presentations—and of course, great service. They don’t want to be singled out for wanting all vegan dishes or to feel weird at the table for having to ask if you can ‘create a dish’ because nothing on the menu is vegan. They want what all diners want, but they are skeptical that they can get full on just veggies—we love this challenge in particular.”

While Gray seems to know the formula for pleasing diners, plant-forward or not, Cohen says she uses her restaurant as lab for that very experiment.

“Dirt Candy, more than anything, is my lab where I get to push vegetables further than they’ve gone before and try new things, like mixing onions and chocolate in desserts, or finding new ways to use fermented black beans,” she says. “I feel like with restaurants in general you have to decide what kind of customers you want and then market to them, and it’s no different if you only serve vegetables. Some people who do vegetable-only restaurants want lifestyle customers, and so they market toward vegans and vegetarians by doing fundraisers for animal rights organizations, and making sure that the entire restaurant is 100 percent free of animal products. Some vegetable-only restaurants want health and beauty customers and market toward them by emphasizing the lightness of their dishes and offering juices with names involving words like ‘rejuvenate’ and ‘antioxidant.’ I want fine-dining customers, so I market toward them with an extensive wine list, tasting menus, and a focus on service.”

At Botanica in Los Angeles, the menu doesn’t rely solely on plants, but certainly features them heavily. Co-owner Heather Sperling says a global pantry of spices from around the world and the perfect preparation for each vegetable are two factors that surprise Botanica’s customers the most.

“The comments we hear most from diners are, one, ‘If vegetables always tasted like this, I’d eat them so much more often,’ and two, ‘I’ve never eaten so many vegetables at dinner before—and felt so satisfied,’” she says. “We’ve found that people get very excited to encounter creative, vibrant, colorful dishes that happen to star beautiful, local produce.” 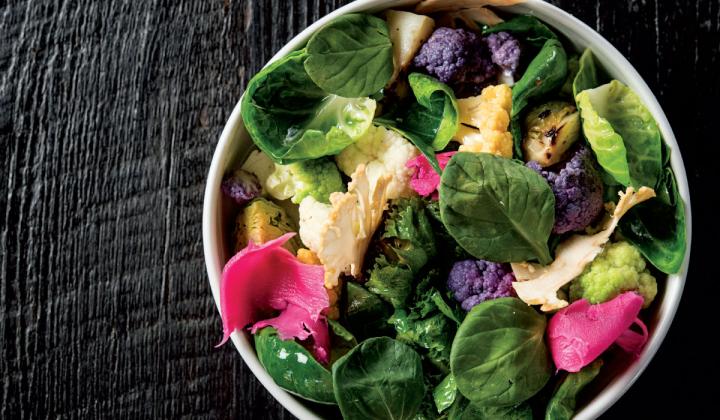 Plant-forward chefs agree that cauliflower is one of the best vegetables to prepare as an entrée or exciting plant-based plate, although some are not certain why. Customers can find cauliflower roasted whole at Botanica in Los Angeles and abcV in New York City. But Neal Harden, chef de cuisine at abcV, is particularly confused by the cauliflower craze. While the vegetable is certainly versatile and meaty—abcV serves its whole roasted cauliflower with a steak knife for a more substantial sensory experience—Harden still finds it a peculiar favorite.

“It’s very sulphurous,” he says. “I find it interesting that people love that one so, so much.”

Indeed, they do. Cauliflower has made its way into mainstream menus, camouflaged as pizza crusts and buffalo wings. Chef Todd Gray of Equinox Restaurant proclaims, “Cauliflower is king!” Gray has served the cauliflower crispy with a tahini vinaigrette and fresh pomegranate, or battered with tempura and topped with toasted cashews.

Meanwhile at Dirt Candy, chef and owner Amanda Cohen has made cauliflower pappardelle. It was one of the first dishes she served and used the cauliflower in a ragu. Now one of her most notorious dishes is smoked cauliflower and waffles, a riff on chicken and waffles for the soul food vegetarian.