At Nick + Stef’s, with locations in New York City and Los Angeles, a platter of a dozen oysters is the perfect prelude for steak.

The Secret Behind America's Steakhouse Renaissance

Starters and sides rival the best of the beef at modern steakhouses.
May 2017 Amelia Levin

Steakhouses are enjoying a renaissance these days. These newer renditions still boast the clubby vibe, stiff cocktails, and giant steaks that made classic steakhouses famous, but restaurateurs are putting a more contemporary spin on the concepts and menus, and chefs are stamping their own signatures on classic dishes.

Case in point: At the scenic Maple & Ash in Chicago, Chef Danny Grant will sous vide cuts of beef short rib in red wine and aromatics for 48 hours, until it’s medium rare, and then he slow roasts it over the wood-fired grill with a honey, beef jus, and soy glaze, until it’s caramelized on the outside like a traditional steak.

In a similarly new vein, Amy Morton, daughter of the legendary Arnie Morton of Morton’s Steakhouse in Chicago, put a lot of thought into the menu for her newly opened, modern makeover concept, The Barn, although it still hearkens back to her childhood experiences. “Everything about The Barn is a nod to my dad, but it’s my way,” she says. “The concept is a nod to steak, but also representing the whole barnyard, and we stay true to our philosophy at Found, sourcing meat and some heritage breeds from family farms and fourth-generation butchers.” (Found Kitchen & Social House in Evanston, Illinois, is Morton’s farm-to-table restaurant.)

As the lineup of proteins at restaurants like The Barn has expanded to include nonbeef proteins as well as more specialty steaks like dry-aged versions, lesser-known cuts, and locally or sustainably raised, grass-fed choices, chefs have had to think outside the box to bring their starters and sides up to the same level of ingenuity.

Chef Nicole Pederson, who’s been the driving culinary force at Found, pulled more creative tricks out of her bag to step up starters and sides at The Barn. Think Soupe de Poisson, a saffron and shellfish soup with poached halibut and herbed cream, tableside-tossed salads, and goodies like a local tomato and onion tart, which is showcased on the restaurant’s central farm table, akin to an Italian restaurant’s antipasti bar.

Sure, the seafood tower concept is nothing new—but at Maple & Ash, Chef Grant swaps the “soggy, waterlogged shellfish sitting on ice,” as he describes it, for a collection of king crab, oysters on the half shell, and shrimp flash-roasted over a coal-fired oven and lightly dressed with a mix of melted butter, garlic, chili oil, lemon, and parsley. The result: a show-stopping, double-decker platter called “The Baller” that comes out decorated with candles and sizzling seafood shells. He notes that the coal-fired oven works well for ingredients with higher water content—like seafood, and also vegetables such as asparagus and celery—because they can get a nice, blistered char and soak up the smoky flavor without overcooking.

Chef Grant offers another seafood appetizer, Shrimp De Jonghe, a classic Chicago steakhouse favorite, but his is a starter rather than an entrée. He begins by brushing jumbo shrimp and earthy trumpet mushrooms with butter and garlic, before roasting the combination in the wood-fired hearth oven and serving atop house-made grilled focaccia, painted with a little umami-rich sea urchin butter and a sherry-spiked beurre monté that is poured tableside.

David Burke Prime Steakhouse is perhaps best known for its on-site dry-aging room, lined with Himalayan pink salt—but the restaurant, located at the Foxwoods Resort and Casino in Mashantucket, Connecticut, also knows that upgraded apps are a sure bet. There, Chef Pedro Avila goes for show with his famous Clothesline Bacon appetizer. He slowly bakes the pork belly bacon for three hours, constantly basting it with a glaze of maple syrup, mustard, lemon zest, and black peppercorns, and then slices it into thick pieces. He serves the bacon pieces hanging on a makeshift “clothesline,” which arrives tableside with a smoking rosemary branch to impart even more aroma.

Chef Michael Neflas of BOA Steakhouse, an Innovative Dining Group (IDG) restaurant with California locations in West Hollywood and Santa Monica, looks past simple sweet potato dishes to yams that are cooked in the embers of an almond-wood fire and caramelized with tamarind, brown sugar, and cayenne pepper—all of which creates an intriguing balance of sweet, salty, sour, and spice. He also uses his in-house smoker to slow-cook whole heads of cauliflower over applewood, until the veggie is tender. Prior to cooking, he rubs the cauliflower with a house-made spice blend. “The remaining juices are reduced into a barbecue sauce to glaze the cauliflower,” he says. “We finish the dish with Laura Chenel goat cheese and thinly sliced red onion.” 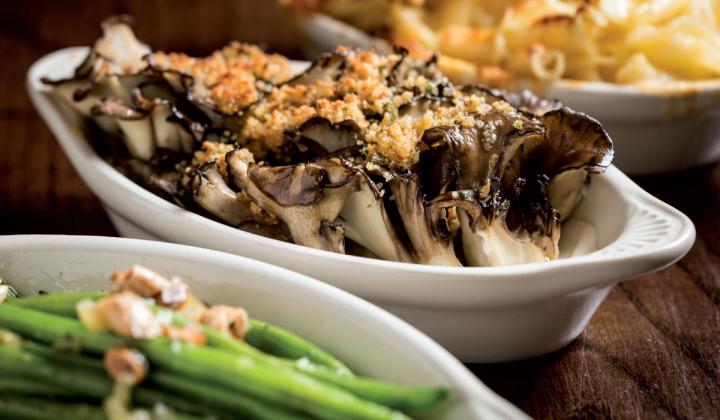 At the Barn, owner Amy Morton pays tribute to her father, Arnie, the legendary proprietor of Morton’s Steakhouse, and sides—like the Roasted Maitake Mushrooms with Creme FraÎche and herbed breadcrumbs—step up to the plate.

Executive chef Travis Strickland of the 2-year-old Baltaire steakhouse in Los Angeles draws from his love of global cuisine and his experience working at the legendary Blackberry Farm in Walland, Tennessee, when sourcing fresh, local produce for his veggie-inspired sides. He serves crispy Brussels sprouts with Thai chili and peanuts and roasted multi-colored cauliflower with an Indian Vadouvan curry spice–blend and golden raisins.

“For the roasted cauliflower dish, we wanted to play up the versatility of cauliflower while also showcasing the vibrant colors and texture you get when roasting it,” says Strickland, who first cuts the whole head into florets and blanches separately by color. He then roasts them until browned and adds the Vadouvan spice with a little vegetable stock to coat. “It’s no secret that curry and cauliflower play well together, but we wanted to introduce a more subtle, pleasing spice by using the milder French Vadouvan. Along with plumped golden raisins, crispy almonds, fried capers, and a lime yogurt, you have this really nice harmony of salty, sweet, and acid—and a texture that I just love.”

While mashed, twice-baked, and au gratin potatoes make a regular showing at traditional steakhouses, today’s chefs are playing around with other starchy supplements to augment their steaks. For an au gratin–like variation, Chef Neflas of BOA swaps the potatoes for house-made gnocchi, tossed with Alaskan king crabmeat in a black truffle–infused cream sauce, that’s topped with breadcrumbs and Parmesan cheese before being crisped in the broiler.

Chef Sean Brasel at Meat Market in Miami, reaches back to childhood memories for his Gouda tater tots. To make the dish, he roasts and shreds russet potatoes, folds in the cheese, and forms the mixture into mini-cylinders before dusting in cornstarch and frying until brown.

Once almost an afterthought, starters and sides at modern steakhouses have as much prestige on the plate as the steaks they pair alongside.