This won’t surprise anybody who has met or spoken to Chainey Kuykendall, but the Johnson & Wales senior didn’t believe she would win this year’s S&D Coffee & Tea Culinary Challenge, held at the school’s Charlotte campus. The fact she’s now the first back-to-back champion in the event’s seven-year history, and, clearly, a recipe-development guru, didn’t crack her humble demeanor. Not even a little bit.

“I just thought, ‘Yeah, my dish is tasty but it’s nothing to write home about it,” Kuykendall says.

It was clearly enough to write another $5,000 check in her honor. Unlike last year, however, when the Mount Airy native gave the prize money to her mother, she plans to gift herself an early graduation present. Perhaps she will backpack through Asia in search of culinary inspiration, she says. If her time competing is any indication, the trip will likely stir up an encyclopedia of possibility.

In 2016, with a theme of Carolina cooking built around S&D coffee and tea extracts or grounds, she whipped up a coffee-marinated beef rib dish with sweet potato and congee mixture that wowed top-line judges from around the state.

This time around, 20 submissions for “Food Truck Frenzy” made it through the first round of judging. And just like last year, the 10 finalists were paired with mentors to elevate their dishes, and to help them prepare for a live demo and performance in front of a packed auditorium.

The mentors—the winner would also earn $5,000 for a charity of their choice—all had ties in the food-truck community. Kuykendall linked up with Aaron Rivera, formerly of The Chrome Toaster.

This category was actually a better fit for her Filipino background. “Because it’s food-truck themed I automatically thought fast food. And I was like, well I watch a lot of Japanese documentaries and what have I seen? Ramen is fast food, obviously, but the different styles of ramen were really interesting for me. So I drew from that,” she says. 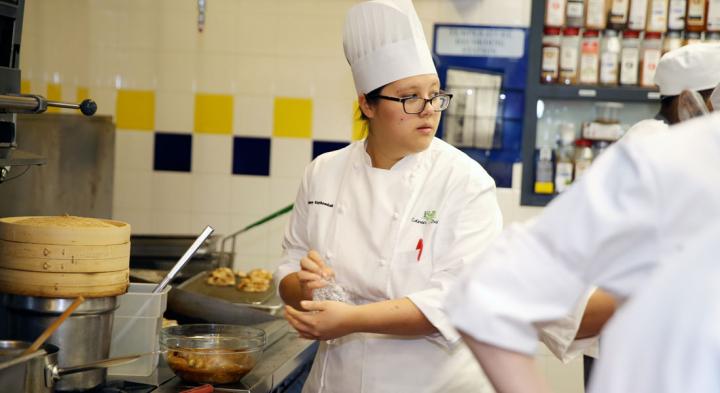 Chainey Kuykendall, a senior at Johnson & Wales, plans to use the prize money to travel.

Her dish, titled "Coffee ScenTEAd Abura Soba” used chicken fat instead of oil as the base for its broth. As for the coffee and tea angle, Kuykendall marinated the corn in black tea extract and added coffee grounds and coffee extract to the sauce. The chicken thighs were brined with tea and there were also tea-pickled cucumbers. Furikake was made with ground sesame seeds and a bit of ground coffee and fragrant tealeaves.

She used a lychee-scented black tea to play up the aromatics.

And yes, this is the same dish she initially shrugged off. “I just entered because this year I’m a senior,” she says. “I just entered to have a little fun and play around with different ideas and ingredients. So when I was doing it, I was looking at everyone’s dishes and I was like, ‘Oh they’re probably going to win.’”

“But the more I kept doing it and seeing it get plated, the more it grew into a complete dish, which is kind of cool,” she admits at last.

Rivera, who has never mentored before, says working with Kuykendall wasn’t exactly stressful.

“She knew what she wanted to do. And I was just here to either support or give my suggestions about what she should do,” he says.

They worked together on the plating, using a disposable bowl to give it that street-food vibe. They biggest issue was the egg itself, which Rivera convinced Kuykendall to cook sous vide to ensure it would come out perfectly.

“With $5,000 on the line you might as well do the best you can. And if you can eliminate any factor of a mess up, why wouldn’t you?” he says.

Rivera says he donated his prize money to the National Multiple Sclerosis Society in honor of his mother.

Another thing that carried over was Kuykendall’s feelings about the live portion of the competition. “The day before I cried because I was really nervous and too anxious,” she says.

But the day-of, she says, her mind cleared and all went well (clearly).

Kuykendall’s experience over the past two years has inspired her career path to a degree. She wants to pursue recipe development and “find somewhere that has a set of people who I can talk to about flavors and composition.”

There’s little question she would be great at it. No matter what she might tell you.