A Restaurant's Essential Guide to Winning the Holidays

Staying open the day of a holiday can endear an establishment to the community and create a loyal following. Offering the right mix of traditional and luxury menu items on these special days—and during the holiday season as a whole—can create memories for guests that will last a lifetime, keeping them coming back to the restaurant year after year. Here are how a few restaurants across the U.S. are playing to the upcoming holidays by meeting guests’ higher-than-average expectations with items filled with comfort and joy.

Roasts, ragus, braises, and bone marrow. That’s what Matt King, corporate executive chef and national director of culinary development at Smith & Wollensky Restaurant Group, sees guests wanting during the holiday season. Playing with flavors like veal, red wine, mushrooms, and pork also works perfectly for the group’s eight-location steakhouse concept. In the summer, he says, the group tries to market the menu to be barbecue-esque, but when it’s cold outside and snow is coming down, the concept’s specialty hearty steakhouse food fits perfectly with what the consumer craves.

Matt Snyder, general manager at Panzano in Denver, agrees with King’s sentiment. Holiday menus, he says, allow the Italian restaurant’s whole animal program to really shine. “People, especially in winter, want that hearty meal, not light and airy like in the summer,” Snyder says. Nic Lebas, the executive chef, will use game meat and do stews and braises with loins, but also ravioli or pasta sauce with less coveted cuts for winter and holiday menus. “We’re able to get the most bang for our buck,” Snyder says. 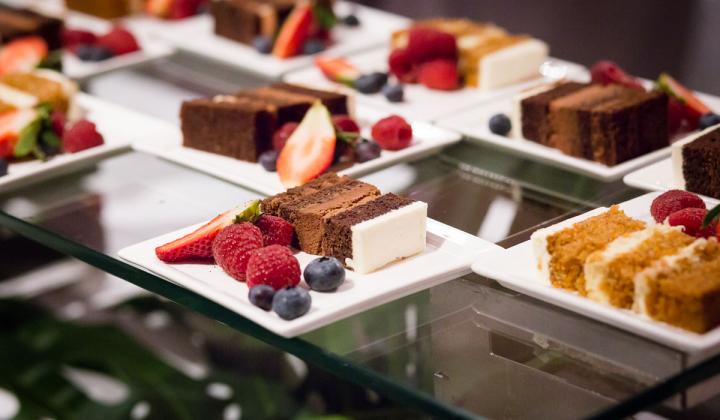 The Boston Harbor Hotel chooses to offer a buffet-style service with elaborate touches.

Playing to the concept

For easy marketing and execution, it is important for restaurants to consider what holiday traditions fit best with their concepts. Lebas at Panzano, for example, plans to serve panettone this year—the traditional Italian sweet bread loaf served at Christmas and New Year. The restaurant further highlights its Italian roots with a five-course tasting menu on Christmas that plays off the traditional Italian Feast of the Seven Fishes.

Another Italian concept, Tratto, in San Francisco partnered with a local winery for its Feast of the Seven Fishes last year. “There aren’t many San Francisco restaurants that celebrate the December holidays from an Italian angle but open to all,” says Rafe Gabel, senior vice president of restaurant operations at Puccini Group, which handles the operations and marketing for Tratto.

Holidays are special times for guests, which adds an extra layer of responsibility on restaurants. Experts in holiday dining agree, guest expectation for food and service is higher than normal for day-of dining. To meet that expectation, restaurants have taken to adding a special touch of luxury to holiday menus.

At a.o.c. in Los Angeles, chef Suzanne Goin adds a dollop of caviar to dishes to mark the occasion. Beverages, too, are a great way to up the ante on a holiday meal and make a moment feel more celebratory, like a complimentary glass of Champagne sent to each guest on New Year’s Eve to toast at midnight.

MATCH Restaurant & Lounge in Phoenix pairs wines and a signature holiday cocktail with its special menus, as does Tratto. “The menus are preset offerings with optional beverage pairings that include hyper-seasonal ingredients with some contemporary twists on classics,” Gabel says.

And The Corner Office in Denver, which has taken a renewed commitment to the celebratory aspect of the martini, plans to lean into that campaign even further when designing upcoming holiday menus. 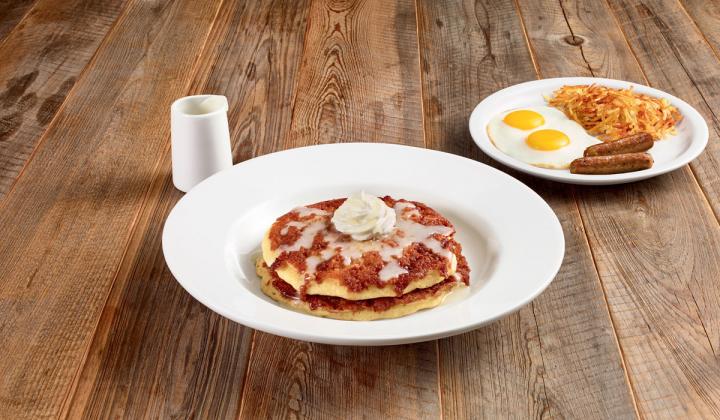 Even the most innovative restaurant professionals stress the power of traditional fare at the holidays. Although it can be difficult to stand up to a diner’s expectations of grandma’s stuffing, the favored holiday dishes are what most diners crave this time of year. Restaurants would be remiss not to include them.

Known for its holiday dinners and “always open” accountability, diner chain Denny’s relies on traditional flavors first. “The holidays are a time when people want flavors that put them in the spirit of the season, which can include cravings for pumpkin, pecan, cinnamon, and caramel,” says John Dillon, chief marketing officer. It wouldn’t be a holiday menu at Denny’s without the classic Turkey and Dressing Dinner, but Dillon says guests also enjoy holiday-themed fare like festive pumpkin- and cinnamon-flavored pancakes.

When designing this year’s menu, Gabel at Tratto similarly has classic flavors like nutmeg, pumpkin, and pomegranate in mind.

Smith & Wollensky’s Thanksgiving menu features dishes like butternut squash soup, poached cranberries and apples, and the turkey and fixings, of course. Other dishes that do well at Smith & Wollensky during the holidays include roasted prime rib, Yorkshire puddings, Waldorf salads, and beef Wellington. “These dishes are indulgent, rich, not something you would have every day, but guests are really comfortable with them,” King says.

Rethinking typical table service can be a logistical benefit when orchestrating a holiday dining program. To optimize labor and please all palates, a lot of restaurants like MATCH, Mattie’s at Green Pastures in Austin, Texas, and the Boston Harbor Hotel choose to offer a buffet-style service with elaborate touches like carving stations and raw seafood bars to make the higher ticket cost seem worth it to customers.

Oliver Ridgeway, chef at Camden Spit & Larder in Sacramento, notes large-format and family-style dishes are also nice options for holiday dinners as they heighten the community feel of a meal and can be easier on staff to plate. 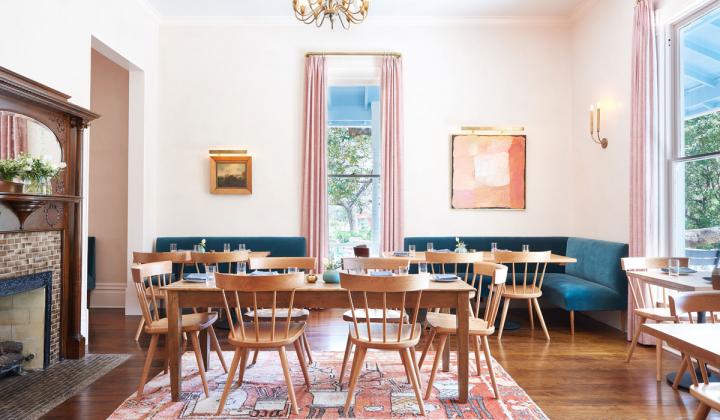 Christmas Eve is the most profitable time of the year at Mattie’s at Green Pastures.

One might think staffing would be the biggest challenge to a holiday dining program, and, while that is an issue, the challenge most present on experts’ minds is seating logistics.

“It’s a delicate balance to reach full capacity throughout the night without making a guest feel rushed,” says Julie Grimm Espinoza, general manager at a.o.c. in Los Angeles. To overcome this challenge, a.o.c. has an intricate system for holiday reservations and confirmations that involves communicating with every guest. “I stagger the time allotted for each table to create a perfect flow that will maximize the restaurant seating, create even covers for the chef while keeping the restaurant full from beginning to end,” Grimm Espinoza says.

To deal with the sheer volume of diners during a holiday, Mattie’s at Green Pastures utilizes a variety of service styles including a la carte, buffets, and private events to avoid strain on the kitchen and spread customers out.

And, although it can be challenging to honor all staff’s request for time off, Luis San Martin, general manager at The Corner Office in Denver, says the best way to overcome that challenge is to communicate effectively and be fair.

The employees who choose to work on holidays want to, Matt Snyder at Panzano in Denver says. They want to spend time with coworkers, take care of guests, and make money that they might not have been able to make if the restaurant was closed. “I think that is definitely a big incentive for most of them,” Snyder says.

While it is true that holidays hold a good deal of profit potential for restaurants, there is a lot of work involved to ensure success. Customers won’t automatically assume a restaurant is open for the holidays. Matt Snyder at Panzano in Denver says it requires an aggressive marketing push to get the word out. For Christmas, Panzano’s approach is multi-pronged and involves social media posts, reaching out to local influencers and media, sending out email blasts, and connecting with local concierge groups and hotels to let them know all guests are welcome.

Rafe Gabel at Tratto in San Francisco notes that proper marketing needs to take place well in advance of people making their holiday plans. “There are so many things happening during the holiday,” he says. “How does your offer stand out?” 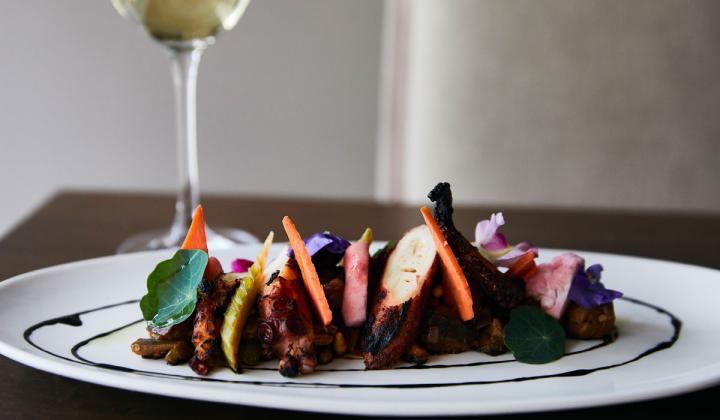 The employees who choose to work on holidays want to, Matt Snyder at Panzano in Denver says.

But eventually, as a restaurant establishes itself as the place to go for a holiday meal year after year, that reputation will begin to speak for itself. “Our guests know that we will be open, and they know it will be delicious!” says Luis San Martin at The Corner Office in Denver.

Other ways restaurants ensure success and hopefully lock down return business during the holidays is by adding special touches like carolers on Christmas Eve or offering a holiday tea service.

Restaurants should also take advantage of holiday cheer occurring around them, like the Parade of Lights that passes by Panzano in downtown Denver every December or the fireworks display a couple blocks away on New Year’s Eve.

It is important to think about what the future of holiday dining will look like, too. Denny’s is doing just that with its new Denny’s on Demand online ordering and delivery system. “This year we’ve made it even easier for our guests to take the stress out of the holidays by offering complete Turkey and Dressing Dinner bundle for four people through Denny’s on Demand,” Dillon says. Now, guests don’t even have to brave the cold to collect their restaurant-ready Thanksgiving feast, day of.

The days before Labor Day and Memorial Day, Snyder says. A lot of restaurants tend to close those days, thinking guests have barbecues to attend, but, for Panzano—which is located inside the Kimpton Hotel Monaco Denver—those Sunday nights in particular are very successful. “People are in town, maybe celebrating on the Monday with family and friends, but they don’t have to work, so they take that opportunity to go out the night before and have a nice dinner with us,” Snyder says.

Panzano has celebrated these grill-centric holidays in the past with an outdoor whole animal roast. “Chef will take a lamb or suckling pig and spend all day roasting it outside. It’s a really cool marketing piece for us,” he says. The team makes sure to place the restaurant’s logo nearby the action so those taking selfies at the scene will be able to recognize branding later.

The Most Profitable Time of the Year

We polled our experts on their restaurants’ highest grossing holidays.

“New Year’s Eve is the biggest night of the year in pretty much any restaurant. If you’re not at full capacity with every table booked, multiple times, there’s something wrong. If you haven’t invested in building a great reputation by providing great service and food all year, there’s nothing you can do last minute to book yourself on New Year’s Eve.” -King

“If it falls on a Monday, then not so much. A lot of the holidays follow this dynamic.” — Walker