Even as Clementine showcases new dishes, comfort foods like hushpuppies will still have a place on the menu.

Post-Pandemic Food Trends: A Swing Back to Exploration

It might take some time, but customers will get there.

When Modern Market Eatery started offering its new sous vide, garlic-rosemary, grass-fed steak sandwich, the menu simply called it a Steak Sandwich. The simple description wasn’t to save on word count, but to put guests at ease. Throughout the pandemic, consumers were hardly in a position to gravitate toward the unknown, and preferred to retreat from travel—both at home and on the plate.

This move from Modern Market was hardly an isolated instance of adjusting to new menu demands during the pandemic and pivoting to comfort over adventure. But as the pandemic winds down, restaurants are increasingly considering the future of flavor and what consumers might demand as normalcy gradually returns.

Nate Weir, vice president of culinary at Modern Restaurant Concepts, oversees menu development for fast casuals Modern Market and Lemonade. Before COVID-19, Weir was looking to implement more exploratory foods and offerings for the health-forward concepts, but the pandemic brought a resurgence in classics rather than palate-expanding flavors.

“What we found is that our core items have continued to do pretty well,” Weir says. “The narrative, I think, is that people were looking for some comfort and some familiarity, and were maybe being a little less adventurous overall. That seemed to continue throughout the rest of last year.”

At both Lemonade and Modern Market, consumers also gravitated toward some indulgence. As such, Weir says the group has made an effort to incorporate more luxurious options to its menus, like a Nutella & Maldon rice crispy treat and a Strawberry Nutella Liege Waffle.

Gen Z and millennial research group YPulse backs Weir’s observation about the move toward more comforting foods. It found in a 2020 survey that 69 percent of respondents believed indulgent food was their salvation in an anxious year. However, the study also found that 83 percent of respondents were eager to return to healthier eating. Weir noticed this health trend within his concepts as well, and says fulfilling the needs of these two seemingly opposite demands post-pandemic requires a delicate balance.

Nutritious foods will play a pivotal role in Modern Restaurant Concepts’ post-pandemic offerings. But instead of explicitly calling out certain dishes as “healthy,” the restaurants will give consumers the option to modify indulgent items, such as substituting cauliflower rice into Modern Market’s Mediterranean steak bowl. 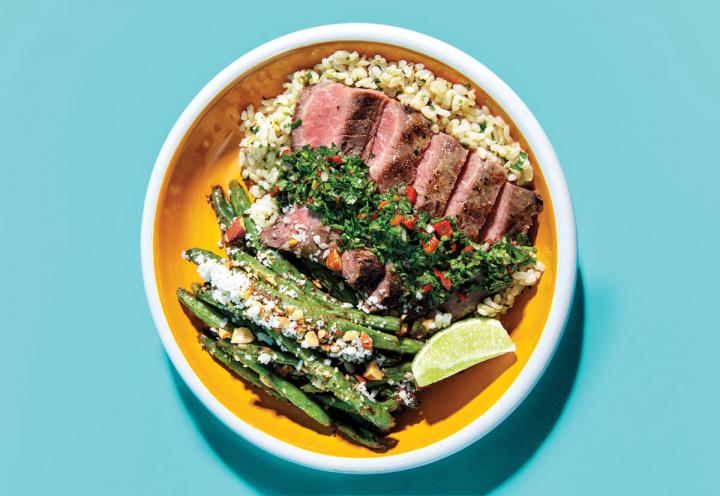 “As people start to re-engage with their favorite restaurants and re-engage with the industry and get back out there, I think you really want to focus on things that are going to resonate with people,” Weir says.

Chef John Russ, owner of San Antonio–based Clementine, believes the necessary surge in home cooking due to stay-at-home orders will change what guests expect from their favorite restaurants. It’s already changed how he approaches menu innovation. Last summer, his concept rolled out meal packages for its guests, with menus that changed on a daily basis. While serving multiple-course meals consisting of new flavor combinations was exhausting for the Clementine team, Russ says he noticed an appetite for novelty from customers.

“Anyone who had money wanted to feel something, because they weren’t able to feel anything outside their house,” he says.

This surge in exploration extended to the wine menu, too. Whereas French and Californian wines usually held guests’ attention, Russ says, he’s noticed increased demand for Italian and Spanish brands compared with pre-COVID levels. “[People] want to try new foods. They want to try new things, they want to experiment with recipes, and they want to talk to the chefs about how they’re going to get better,” Russ says.

To accommodate this momentum toward more adventurous foods, Russ is only keeping three items from his past menu and revamping the rest, as he says guests are tired of the same tried-and-true fare. He thinks people are hungry for more aggressive foods and less subtlety in their meals, and plans to bring more audacious flavors to the table—like, say, Sichuan peppercorns.

But Liz Moskow, flavor expert and vice president of brand development at online ordering platform Ordermark, says this swing toward exploration and new flavors isn’t going to happen right away.

“I don’t think it’s going to swing the pendulum in the opposite direction immediately. If you were asking me about trends in the next year or two, I would say people are going to get really interested in their food exploration again,” she says. “But right now I think it’s going to still stay in that layer of uncertainty.”

Take the classic soup and bread combination. With consumers still hesitant to explore new dishes, Moskow predicts global renditions like tikka masala and garlic naan—which have already established some familiarity in the U.S.—will become more popular. She suggests quick-serve operators find ways to incorporate new flavors without going too far into unfamiliar territory; full-service brands, meanwhile, can take advantage of consumers’ pent-up demand for custom, shareable experiences. She points to experiences like polenta pours—in which servers pour polenta directly on a table and piles it with toppings—as an example.

Moskow says the future is bright as it relates to flavor trends. The pandemic forced brands to build digital muscle, which they could in turn use to introduce innovative flavors through channels like delivery-only and ghost-kitchen platforms. “When one trend starts to decline, it might get tweaked into something else,” Moskow says. “Maybe that trend has a better opportunity to adapt than it does to just die.”

As for pre-pandemic trends that won’t be making a reappearance, Moskow foresees less attention on the extreme ends of the diet spectrum. She’s noticed a polarity between people wanting to pamper their palates and those going on strict health diets. After the pandemic, people will, naturally, be eager to come together over meals. And those who adhered to strict diets while they were quarantined at home may be tempted to dine out, even the fare doesn’t perfectly follow their regimen.

Meanwhile, Moskow also predicts the disappearance of the other side of the spectrum, where overindulgence-saturated Instagram feeds with over-the-top food in excessive quantities. The pandemic will likely bring a happy medium.

“If anything, COVID has taught people that you just never know. Life is not certain—anything is around the corner,” she says. “I think this sort of a ‘joie de vivre’ and ‘seize the day’ mentality is going to come back into food, and people are just going to look to enjoy food on a regular basis.”