Ripe olives, fresh cheeses, and creamy hummus are only the beginning of a cuisine that spans a culturally rich region.

Middle Eastern Cuisine is Ready for its Moment

Americans are waking up to the deep nuances of this aromatic, wholesome, vegetable-heavy food, whose origins lie with the start of civilization.
April 2018 Maggie Hennessy

A group of countries spanning from North Africa to Asia, the Middle East is at the crossroads of rich cultures, fallen empires, and centuries of migration. It encompasses wide-ranging geographies, from vast, empty deserts to lush countrysides, long coastlines, and rocky mountains. From Egypt to Lebanon to Iran, you’ll find overlap in dishes like tabbouleh, pilaf, and hummus, yet heavily regional differences within each. To paraphrase celebrated Middle Eastern food writer Claudia Roden in the classic New Book of Middle Eastern Food, the history of Middle Eastern food and the Middle East are one and the same. “Dishes carry the triumphs and glories, the defeats, the loves and sorrows of the past,” she says in the book.

These diverse cuisines are no longer relegated to blanket descriptors like Middle Eastern or Mediterranean, as more U.S. operators explicitly bill themselves as Lebanese, Persian, Armenian, and Israeli. In the process, Americans are waking up to the deep nuances of this aromatic, wholesome, vegetable-heavy food, whose origins lie with the start of civilization.

“The American dining public is increasingly primed to be excited about what’s new and next,” says Steve Cook, the restaurateur/partner of modern Israeli spot Zahav in Philadelphia who cofounded the CookNSolo restaurant group with chef Michael Solomonov. “There’s a sense of adventurousness among diners now that didn’t exist 10 years ago. Whether that’s regional Thai, Malaysian, or Israeli, there’s a much greater acceptance to try something authentic.”

He likens Middle Eastern cuisine’s trajectory to that of Italian in U.S. restaurants in the 1980s, when generic red-sauce joints started giving way to more regionally specialized concepts like Sicilian and Tuscan, reflecting growing consumer interest in authenticity.

Our love affair with the Holy Land

You can’t talk about the rise of Middle Eastern cuisine in the U.S. without Israel—a country scarcely 70 years old and about the size of New Jersey whose complex, magnetic food has taken Americans by storm.

A young nation of immigrants, Israel encompasses the culinary traditions of more than 100 cultures that have been in the country and neighboring Palestine or moved back from the diaspora to modern-day Israel. This includes a considerable Arab minority, along with populations from Iran, Russia, Hungary, Morocco, Jordan, Iraq, and other countries. There are Jewish culinary considerations, too, of keeping kosher—though Israeli cooking isn’t always synonymous with kosher cooking, particularly in secular places like Tel Aviv.

To say Zahav has gotten a lot of attention would be a massive understatement; the 10-year-old spot has nabbed top accolades from Bon Appétit, Esquire, and Eater, and remains one of Philly’s toughest reservations. But when Solomonov and Cook opened in 2008 on a nondescript street in the Society Hill neighborhood, “nobody was really talking about Israeli cuisine,” Cook says. “People always equated Israeli food with Middle Eastern, and that was pretty much everything they knew about it.”

Bringing hummus to the white tablecloth

Despite shifting early toward more approachable food, Zahav is a decidedly upscale dining experience—with craft cocktails and a strong focus on service in a cool, loft-like space with an open kitchen, leather booth seating, and dim pendant lights. Cook says they had to actively push back against a casual perception, trading graphic T-shirts for more formal staff uniforms.

It’s a challenge familiar to many Middle Eastern concepts looking to divorce themselves from the fast-casual, build-your-own bowl/sandwich image so many Americans have cultivated of Middle Eastern fare. In Chicago, 48-year-old Armenian stalwart Sayat Nova has consistently fought against the stereotype that ethnic restaurants should be cheap.

“Middle Eastern food went on the path of fast food and stayed with it,” says chef/owner Roupen Demirdjian, whose late father, Arsen, opened Sayat Nova in 1970. “I think they just want to attract the masses. We’re a little more of an upscale, white-tablecloth restaurant. It’s troublesome, because people say, ‘I can get hummus and lentil soup at this place down the street for very cheap.’ And I’m like, ‘Well, yeah, but I go looking for the best chickpeas, the best tahini, and best red lentils I can find.’”

Demirdjian’s family hails from the Adana region of Turkey, near the Syrian border. It’s an area Armenian communities called home for thousands of years as part of the Ottoman Empire, until the Turkish-Armenian conflict of the late 19th century resulted in the deportation and massacre of roughly 1.5 million Armenians in 1918. Now just 50,000–70,000 Armenian Turks remain, and many call Istanbul home.

Sayat Nova’s interpretation of Armenian cuisine thus betrays strong Levant influences. Cracked wheat tabbouleh salad is juicier than its herb-centric Lebanese sibling, thanks to a heavy dose of tomato and lemon juice. And everything from delicate lamb, beef, and chicken kebabs to lamb-stuffed grape leaves is tinged with peppery spice. “That comes from being in the middle of spice trade routes for centuries,” Demirdjian says of being at the crossroads of western Asia, the eastern Mediterranean, and northeast Africa.

Even 48 years after Sayat Nova opened, Chicagoland restaurants billing themselves as Armenian remain scarce; Demirdjian could only recall fast-casual Siunik in north suburb Glenview and full-service Ararat in Mundelein, Illinois. But that doesn’t mean there isn’t Armenian cooking happening in the countless Middle Eastern–labeled spots throughout the area.

“If you’re trying to sell something that’s relatively unknown, if you describe it as Middle Eastern food, you’re covering a bigger area,” he says. “It’s a get-them-in-the-door kind of thing. Even in L.A., where there are a ton of Armenians, they call their restaurants Middle Eastern. I never did. I didn’t want to.” 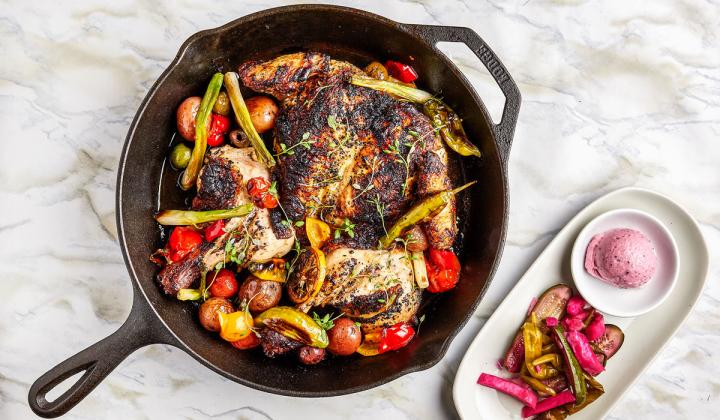 Bright, fresh, and pickled vegetables alongside grilled meats are a hallmark of Middle Eastern cuisine.

Lebanon was under control of the Ottoman Empire until World War I, after which it was colonized by the French and saw American troops in the 1950s and ’80s, though it’s been formally independent since 1943.

To understand Lebanese cuisine, one has to understand, beyond the nation’s contentious political and cultural history, its geography and agriculture. Lebanon is one of the few countries in the region that has four seasons, abundant water, and a multitude of microclimates. “Things are greener and there’s a lot of citrus, so flavors and ingredients are allowed to have their natural presence on plate rather than being over-seasoned or over-pickled,” Massoud says. Wealthy families might slaughter a goat once a month, but the majority of people eat primarily vegetarian—vegetable stews and a variety of hot and cold mezze.

Massoud opened fine-dining ilili in Manhattan’s Flatiron district in 2008 as an answer to the success of high-end Japanese spots Nobu and Zuma. “What they did to Asian cuisine, we hope to achieve with Levantine cuisine,” he says.

Ilili’s herbaceous, lightly dressed tabbouleh reflects the region’s abundance, while the hummus is almost theological in its ratios: “Just soft enough to maintain the integrity of the chickpea, just nutty enough to give the flavor of tahini, and just lemony enough for a hint of acidity when you drizzle it with olive oil and scoop it up with pita,” Massoud says. “It took a while for people to appreciate what we consider the real deal.”

About half of the country’s Iranian population lives in Los Angeles, according to U.S. Census data. The region’s diaspora has been lovingly dubbed Tehrangeles. Yet for a long time, residents’ exposure to the cuisine was largely via sandwich shops and kebab houses, like shoebox-sized Attari and beloved strip-mall storefront It’s All Good House of Kabob.

“These days, more people are realizing that Persian food is simple, healthy, and delicious,” says Shawn Saloot, partner of stalwart Darya Restaurant in Orange County and West Los Angeles. “I think that is why it is becoming popular.”

Iran is home to one of the world’s oldest continuous major civilizations, with historical and urban settlements dating back to 7,000 B.C. Once a major empire, the country has endured invasions by the Greeks, Arabs, Turks, and Mongols—though it’s reasserted its national identity throughout the centuries. Historical interactions with neighboring regions have undoubtedly affected the cuisine, though, with Caucasian, Levantine, Greek, Central Asian, Russian, and Turkish gastronomy all leaving their mark.

“Persian food originated from different parts of Iran, each with their own specific and unique culture and geography, such as the Caspian Sea whitefish with herb rice,” Saloot says. “But let me tell you something, Persian food is not spicy at all.” Rather, he says, it’s more often tinged with aromatic saffron, turmeric, and cinnamon. Grilled meat is often the centerpiece, with rice and bread being staples of every Persian table.

Saloot opened Darya with his brother Ali Saloot in 1985, opting for old-school elegance via chandeliers, Victorian décor, and an ambitious menu of traditional Persian meats, stews, and rice dishes. They opened a second outpost in Santa Monica 10 years later.

The Saloots draw from Southern California’s agricultural abundance to faithfully re-create classic dishes, such as kashke bademjan, with sauteed eggplant mixed with yogurt, fried garlic, turmeric, fried onion, and topped with sautéed mint, garlic, and kashk (whey sauce). Their famous tahdig, or crispy rice from the bottom of the pot, is heaped with Fesenjan stew, made from slow-boiled chicken in a sauce of even-slower-cooked pomegranate and ground walnuts. Homespun touches permeate Juicy Chicken—a kebab made from chicken-breast medallions marinated overnight in lemon juice, saffron, corn oil, salt, and pepper, then charbroiled—which was so named by Saloot’s then-7-year-old son.

Yet even as the landscape has grown more crowded with spots like stylish Flame and Iranian-American Cafe Glacé doling out lamb tahchin—saffron rice cakes—and Persian gyros, Darya remains true to the Saloot’s Iran for 33 years and counting.

“I cannot change the traditional Iranian food,” Saloot says. “We have only tried to keep its standard the highest possible by using fresh and quality ingredients.”